[WARNING: Contains disturbing images] Okay – this is a fairly morbid topic but a very interesting one. Embalming is not required by law in many countries, but it is often performed for the benefit of loved ones. An embalmer has the very responsible task of ensuring that family members are not left with an undesirable last memory of their loved one. These are the five steps involved in the embalming process. 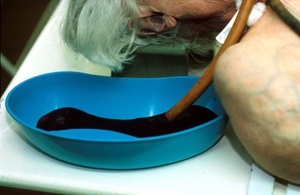 At anytime, day or night, the funeral professional may be called upon to do his or her job. People have a tendency to die at the most inconvenient times, and a mortician cannot wait until later to retrieve a body. This means lots of getting up at 1 AM and having to work on holidays.

When someone dies and once authorization has been granted by the family, doctor, and/or by the medical examiner, the embalmer is called to make the “removal” of the body. After filling out the appropriate paperwork the embalmer takes the body to the funeral home, and if embalming is requested or required, begins the process.

An embalming report is filled out that logs all jewelry and personal items on the body; details any discolorations, cuts, bruises, etc. on the body; and documents the procedures and chemicals used during embalming. This report can become very valuable if a deceased’s family bring a lawsuit against the funeral home.

All clothing, bandages, IV needles, catheters and such are removed. A strong disinfectant spray is used to clean the skin, eyes, mouth, and other orifices. If rigor mortis (the stiffening of muscles after death) has set in, it is relieved by moving the limbs and head about and massaging the muscles. If the decedent is a man, he is normally shaved at this point. Razor burn (yes, not even death can save you from this) is less likely before the arterial chemical firms the skin of the face. Even women and children are shaved to remove the fine “peach fuzz” we all have on our faces. This is done to avoid the makeup from collecting on the hair and making the makeup more noticeable. 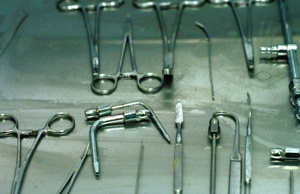 Next begins the process of placing the facial features and the body itself in the position it will remain in the casket for viewing. This is done before arterial embalming, because the body will be truly “set” – firmed in position once formaldehyde reaches the tissues.

Great care is taken to close the eyes. The traditional method for doing this involves placing a bit of cotton between the eye and eyelid. Many times after death the eyes sink back into their sockets, so small plastic “eye caps” are placed on each eye ball. A small amount of stay creme is placed on the eyecap to avoid dehydration of the eyelids. Contrary to popular myth, the eyelids are never sewn shut, but in some cases that may be glued together to prevent separation.

The mouth is closed either by tying the jaw together with a piece of suture string or by a special injector gun. With the suture method, a curved needle with a piece of suture string is threaded through the jaw below the gums, stuck through upper jaw into to the right nostril, threaded through the septum of the nose into the left nostril, and then passed back down into the mouth. The two ends of suture are tied, careful not too tightly, so that a natural appearance of the mouth is created.

To finish closing the mouth, many times a mouth former is used. A mouth former is similar to an eyecap as it has a textured side that grips the lips, but it is shaped like the mouth. A small amount of stay creme is also used on the mouth to avoid dehydration and help hold the lips in place. The mortician may also squeeze inside the mouth a little mastic compound, a paste kind of like caulk to give the mouth a better and more pleasing shape. 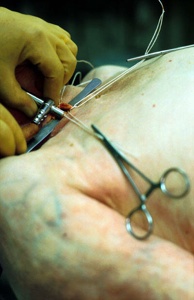 Arterial embalming is begun by injecting embalming fluid into an artery while the blood is drained from a nearby vein or from the heart. The two gallons or so needed is usually a mixture of formaldehyde or other chemical and water. In the case of certain cancers, some diabetic conditions, or because of the drugs used prior to death (where body deterioration has already begun), a stronger or “waterless” solution is likely to be used for better body preservation. Chemicals are also injected by syringe into other areas of the body.

Once the embalming fluid begins to flow into the arterial system, pressure begins to build up in the entire vascular system. This helps the fluid reach all parts of the body and penetrate into the tissues. Evidence of this can be seen in bulging veins throughout the body. The jugular drain tube is opened periodically (it is normally closed) to allow blood to escape and prevent too much pressure in the vascular system which could cause swelling. The blood drains directly into the sewer system, which sounds gross, but in reality much worse things go into our sewers.

Once arterial injection has been completed, the arterial and jugular tubes are removed, the vessels are tied closed, and the incision used to access the vessels is sutured closed and sealed with a special chemical. 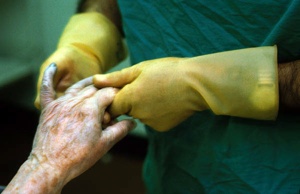 Arterial fluids mainly treat the skin, muscles, and organs themselves. What’s inside the organs (such as urine, bile, etc.) begins to decompose. Gases and bacteria can build up and cause distention, odor, and purge (such as brown fluids coming out of the mouth – not exactly the way you want to remember grandma). These bacteria can sometimes spread to other parts of the body, even after arterial embalming, causing decomposition problems (and then sometimes legal problems for the funeral home).

Cavity treatment starts with aspirating (suctioning) fluids out of the internal organs in the abdomen and thoracic cavity. This is accomplished this with the use of a trocar. The embalmer uses it to puncture the stomach, bladder, large intestines, and lungs. Gas and fluids are withdrawn before “cavity fluid” (a stronger mix of formaldehyde) is injected into the torso. The anus and vagina may be packed with cotton or gauze to prevent seepage if necessary. (A close-fitting plastic garment may also be used.)

These steps apply only to a body that has not been autopsied. During autopsy all the internal organs are removed and inspected by the medical examiner and then placed back inside the body or sometimes incinerated. At the funeral home, the mortician removes the viscera and places it in a plastic bag called a “viscera bag” and allows it to soak in cavity chemical. The inside of the body cavity is aspirated with a special instrument and then coated with an embalming gel and/or an embalming powder. The treated organs are then placed back inside the body or the bag full of organs gets placed at the foot end of the casket (so never try to admire a deceased’s shoes!) 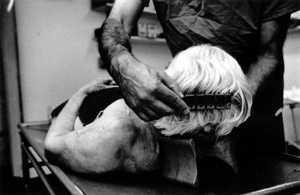 The body and hair are washed once more to remove any blood or chemicals and then thoroughly dried. Any restorations are done now, such as rebuilding features, masking sores or abrasions, etc. Makeup gets applied to the face, neck, and hands. Either a translucent makeup is used in normal cases or an opaque makeup is applied if the skin is discolored. In either case, the effect should be a subtle as possible to avoid Uncle Roger looking like Aunt Rose. The fingernails are trimmed. The hair is styled, either by the embalmer or by a professional hairdresser or barber.

The remains are dressed in the outfit chosen by the family. This outfit almost always includes underwear, shoes, and socks. In the case of autopsy or other difficulties, plastic undergarments are placed on the body to prevent leakage.

Finally comes casketing. The body is placed into the casket and posed in the proper position. The family normally views the body at this point and decides on any changes that need to be made. During the viewing period (which can sometimes last for several days) the embalmer will periodically check the body for signs of decomposition and takes any corrective action.

Source: Everything you ever needed to know about Embalming. Images are copyright Edmond Terakopian