It is a well known fact that a hit at the Box Office frequently garners a horrid attempt to continue an otherwise completed story. For instance, The Matrix, Caddyshack, or Weekend At Bernie’s could quite easily fall into that category. However, just as often the public gets the further adventures of our main characters that actually add life to the franchise. The following 15 sequels are just that: the very best in narrative continuation.

15. Escape from the Planet of the Apes

This is probably the least popular choice on the list, but I am including it because it did such a great job of reversing the morality of the first film – in the original the Humans are treated like animals and kept in cages – in this film, the Apes are studied by humans in the return to Earth in the future. This film is both a prequel and a sequel as we go back in time chronologically, but forward in time sequentially. The only clip I could find for this film is the DVD series trailer. 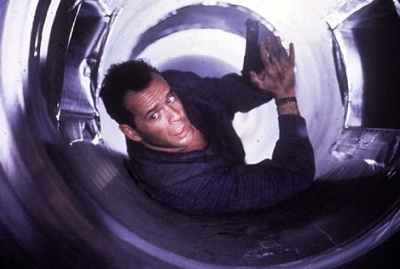 John McClane just wasn’t quite finished dealing death to the bad guys at Nakatomi Plaza, and he felt the need to dish out more than enough thrills and kills in and around an airport. Willis kicks the excitement level up just enough to keep the story alive and well. Twice more since, as well!

This time, rather than the jungle, Danny Glover tracks our space monster through the city streets, buildings, and backyards taking over nicely from Arnold. Key scenes in this fine continuation include the healing wound bit taking place entirely in an old woman’s bathroom, and the view of the creature’s trophy case at the end featuring an Alien skull! Sorry, all I could find was this review.

12. Harry Potter and the Chamber of Secrets

Coinciding with the wonderful children’s book series, the adventure continues with Harry, Ron, and Hermione at Hogwarts. This time, now that Harry is a bit more familiar with his magic, the trio take on a giant Basalisk!

Originally planned for a direct-to-DVD release, Disney-Pixar decided most wisely to ship this sequel to theaters instantly creating another masterpiece. The search for Woody by Buzz and crew is at most heartwarming and adds a whole different layer to the story.

The wonderful song in the video was nominated for an Oscar.

Largely considered to be the world’s greatest superhero movie, the sequel to the amazing SPIDER-MAN movie proved not only that one of the most beloved comic book characters can be translated to the big screen without sacrificing a bit of the humor and humanity brought to the page, but can also be directed by a moan much more well known for horror films: Sam Raimi. Tobey Maguire proved his chops as well by acting every bit the way we all see Peter Parker.

In 1978 Jackie Chan became a huge international star (everywhere but in the United States) with Drunken Master . So in 1994 on the brink of becoming a huge star in the U.S. too, Jackie made this sequel/homage to the original. It continues the story of Chinese folk legend Wong Fei Hung. It’s one of his very best films. It was finally released in a slightly edited, specially dubbed version on U.S. screen in 2000. In 2000, they finally dubbed, edited and re-mixed the soundtrack to show Jackie at his very best in an amazing and thoroughly enjoyable action comedy which proves once and for all what an incredible athlete and martial artist Jackie is. This film has some of the most intricate, creative, and beautiful one on one fighting choreography you will ever witness. It’s also very funny and Jackie’s at the peak of his skills and charisma here.

When Sam Raimi wrote and directed the original horror classic, EVIL DEAD, with Bruce Campbell, he was only trying to make a film and never anticipated the love he received. Having accumulated enough cash from the flick, Raimi went back to work essentially re-writing the story as a sequel and retelling as EVIL DEAD 2. It’s close to the original, but far superior.

Okay – I realize that this is a prequel – but chronologically speaking it came after, so I am including it. Batman Begins was really the first Batman film that was of truly epic proportions. With brilliant acting from Michael Caine and the best onscreen batman to date (Christian Bale), how could we leave it off?

6. The Bride of Frankenstein

Not necessarily meant to be a sequel per se, the fearful saga of the lumbering and reanimated corpse leaps to a new terrifying level as the good doctor creates woman. The bride turns out to be even more horrifying than original!

Ripley finds herself on a planet supposedly overrun by the very alien life forms she desperately tried to avoid in the original. With amped-up action and an all-out war with the bugs, Bill Paxton, Michael Biehn, and Lance Henrickson join the superb cast to do all out battle.

4. Indiana Jones and the Temple of Doom

Actually a prequel, though still the second in the story, the TEMPLE OF DOOM follows our hero, Indiana Jones, making his way around the world to India in order to rescue the Shankara Stones from the evil Mola Ram. Tagging along this time are Stephen Speilberg’s real-life wife, Kate Capshaw as a Hollywood dancer, and the every bubbly Short-Round. Most disgusting scene: Monkey brains! Oh, and those bugs, “aren’t fortune cookies!”

3. The Lord of The Rings: The Two Towers

Peter Jackson did everything humanly possible to cram every bit of the Tolkein books into his sprawling, gorgeous trilogy. But even with that, there had to be a second movie and that had to come after the release of THE FELLOWSHIP OF THE RING. The cliffhanger left the audience wanting so much more, and THE TWO TOWERS more than delivered. It would prove to be epic.

2. The Empire Strikes Back

Some of the most startling revelations ever brought to screen, the sequel to STAR WARS: A NEW HOPE gave the world the paternal Darth Vader, the patriarchal Yoda, and the growing love between a space scoundrel and a princess. Directed by Irvin Kirshner, the stark differences between the bleached frozen wasteland of Hoth, the wispy calmness of Cloud City, and the earthy filth of Dagobah, proved his creative worth to the original trilogy. The Jedi attains truth through the Force, and shows us just hour dour and unsettling the galaxy far, far away can be.

The Corleone family made us feel the raw, underhanded grit of being inside the Mafia. And much like a family in reality that we’ve all grown to love, they return in nearly a much stronger movie than the original. Perhaps the most well-known and most beloved sequel ever made, THE GODFATHER PART 2 continues to be a classic seen the world over.