There’s no denying it: without the influence of George Lucas’ masterpiece, the original Star Wars trilogy, on the Sci-Fi genre as a whole, it’s easy to assume that many films -if not all in the arena- would look significantly different. Lucas was given a chance by 20th Century Fox after many, many failed attempts to get his ‘Space Opera’ off the ground, and once he did, it took the movie industry by storm offering him the opportunity to continue his dream for 2 more films. Eventually, he’d go on to create another trilogy, granted not quite as stunning as the first, that would more or less wrap up the entire story. Thanks to Star Wars’ commercial success, we’ve been privy to all the merchandise it’s been able to generate and have seen some of the most creative and amazing toys put to plastic. Throughout the films there has been a slew of outlandish and amazing aliens and monsters from unknown galaxies, and each movie has a set few that really steal the focus. And that is what this list is all about: The Top Ten Aliens From the Original Star Wars Trilogy. I hope you enjoy. In case you couldn’t guess for yourselves, I am a rabid fan and have even gone so far as to name my children after characters from the franchise. A stipulation for me for this one was that none of these ‘aliens’ were ‘main’ characters who appeared in all three movies, which, as you’ll see, leaves Chewbacca out. Have fun! 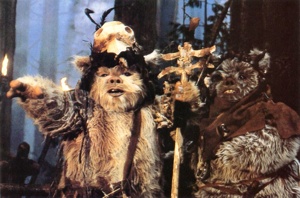 Hailing from Endor, or, if you’re a stickler, a moon of Endor also, coincidentally enough, called Endor, the teddy bear-like Ewoks turn out to be quite the little allies and serve, in their own little way, to turn the tide on the Empire. Standing basically knee-high, the Ewoks are a primitive race specializing in antique weaponry and the ability to hide just about anywhere. During The Battle of Endor, many of these miniature marauders lost their lives and the audience was actually witness to one such tragic event after an explosion on the forest floor. Regardless of their aid to the heroes, many viewers and fans can’t stand the little Muppets and vehemently refuse to bend on this.

A Little Bit of Trivia: Did you know that Endor was originally written as Kashyyyk, the home of the Wookies? Budget constraints and re-writes paved the way for the Ewoks instead and fans would have to wait until the new trilogy to get a glimpse of Kashyyyk. 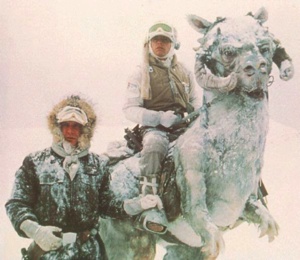 “And I thought they smelled bad on the outside!” quips Han Solo as he slices the gut of one such creature to save the life of his pal, Luke Skywalker. Looking like a mix between a kangaroo, a Tyranosaurus rex, and a ram, Tauntauns served the Rebel fighters on Hoth as beasts of burden and riding mounts. Able to withstand frigid temperatures, for the most part, Tauntauns were loyal, horse-like, and relatively docile and dumb. We bare witness to one of these creature’s untimely demise at the hands of another Hoth beast, the Wampa.

A Little Bit of Trivia: Did you know that Tauntauns were all stop-motion animation for the far-away shots? Up close, the were hand puppets and dressed dummies. This was odd because in a previous movie, real elephants were used for the mounts of the Tusken Raiders. 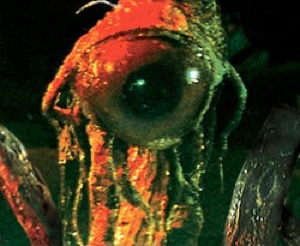 Luke Skywalker almost took an early exit to the series of adventures he’d eventually be a part of to the tentacles this nasty critter. The dianoga, or garbage squid, resembles a miniature sea-faring ‘dinosaur’ with a tube-like body and one leering eye on a stalk jutting from its serpentine neck. Most feed exclusively on the human food waste tossed into garbage smashers, but when threatened they will attack and Luke got the full brunt of his particular aggressor’s instincts.

A Little Bit of Trivia: Did you know that Meg, the oft abused daughter on Family Guy, portrayed the Dianoga in their ‘Blue Harvest’ tribute to Star Wars earlier this year? 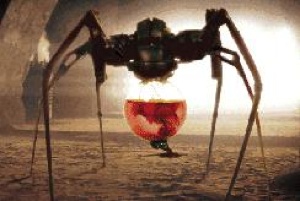 These creepy brain spiders were seen wandering aimlessly throughout Jabba’s Palace in the early scenes of Return of the Jedi. The B’omarr Order, which consisted of the B’omarr Monks, was a mysterious religious order that moved to the Tatooine. The B’omarr believed that cutting themselves off from all physical sensation would further their studies, and allow them to ponder the galaxy and achieve enlightenment. To this end, his brain was removed through a special procedure, and was placed in a nutrient-filled jar. When they did need to travel around their monastery, the brains were transferred into special ‘spider droids.

A Little Bit of Trivia: If you’ve ever played LEGO Star Wars II: The Original Trilogy, these quick little arachnids can be used as mounts if necessary. 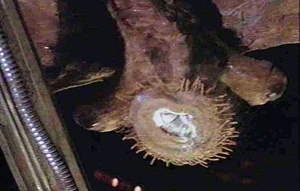 After escaping a dangerous fleet of TIE-Fighters through an equally dangerous asteroid field, Han Solo and company cruise into a giant space rock with hopes of avoiding any more Imperial entanglements. While inside, and as each of the crew took a deserved rest or made important repairs on the Millennium Falcon, several bat-like creatures attached themselves to the Falcon’s hull and immediately began gnawing on the power cords. Due to Han and Chewie’s vigilance, the beasts were removed before irreparable damage was done to the ship.

A Little Bit of Trivia: Did you know that the space slug, the rapidly closing maw out of which our heroes barely escaped, was actually slowly digesting the mynocks in its gullet? It ate much like an alien Venus FlyTrap.

5. The Sarlacc in the Pit of Carkoon

Deep within the distant, endless expanse of the Tatooine desert live hundreds of sand creatures called Sarlaccs. Just remotely exposed to the elements, the Sarlaccs beak and many of its hundreds of tentacles can be seen breaking the surface of the sand. But beneath the scorching earth lies the rest of this massive creature in the form of a seemingly endless stomach with hundreds of chambers. The Sarlacc holds its victims for thousands of years and slowly digests them, making them suffer painfully.

A Little Bit of Trivia: We all saw Boba Fett meet his untimely demise to the gaping mouth of the Sarlacc, right? Well, according to one of the post-film novels, he didn’t succumb to the digestion of the beast thanks to his heavy Mandalorian armor and eventually escaped. 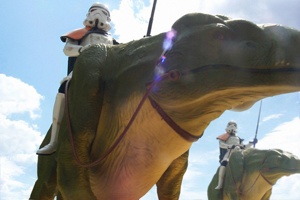 While persuing R2D2 and C-3PO across the deserts of Tatooine, the Imperial Stormtroopers relied on local mounts called Dewbacks to assist in the harsh conditions. More than resembling giant lizards, the Dewback was just as cold-blooded and would get sluggish and tired during the cooler nights and mornings on Tatooine. Dew would eventually build up on the backs of each one, which would provide sustenance during daybreak, hence the name.

A Little Bit of Trivia: Dewbacks were employed by sandtroopers in Episode IV: A New Hope because George Lucas believed that the use of an organic means of transport instead of mechanical means, such as a landspeeder would give the desert search scene an “element of surprise.” However, the dewback that was eventually produced for the movie was not created with movement in mind so it was relegated to the background. In 1995 additional footage for the scene of the sandtroopers searching for the droids was filmed in Yuma, Arizona for the 1997 Special Edition of A New Hope. Computer-generated imagery was used to add dewbacks to the scene. 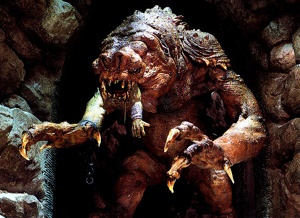 Perhaps the most famous rancor was the one owned by Jabba the Hutt who kept it in a pit beneath his palace courts, dropping in victims who displeased him in one way or another in order to feed it. Malakili, a famous beast tamer who had traveled with a local circus, cared for his rancor. Malakili formed an unlikely bond with the animal, even going so far as to sneak the rancor out of Jabba’s palace for a run in the desert, and wept openly when the beast was killed by Luke Skywalker. Rancors in general are known for being nothing more than a walking mess of teeth and claws ready to eat anything they can.

A Little Bit of Trivia: In the English language, the word rancor (or rancour in Commonwealth English) means “a feeling of deep and bitter anger and ill-will; hatred; malice.” 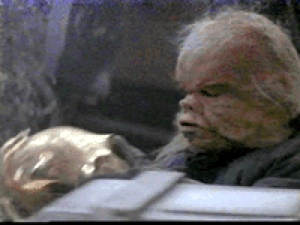 The Ugnaughts were vaguely porcine humanoids with slightly upturned ‘pig’ noses and portly bellies. Compared to standard humans, their height would be considered short or dwarfed. Ugnaughts were industrious and loyal workers and also had a rich oral tradition. They were quite hardy, able to withstand long periods of discomfort, and lived to around two hundred years of age. On Cloud City where they were employed, several of the ‘pig-guys’ discovered C-3PO after his unfortunate destruction from a Stormtrooper blaster and attempted to play keep-away from Chewbacca.

A Little Bit of Trivia: Did you know that several of the actors hired to play the Jawas in A New Hope were just the right size to also portray Ugnaughts and, eventually, Ewoks? This cast included Warwick Davis who would later go on to play Willow, Professor Flintwick, and the Leprechaun. 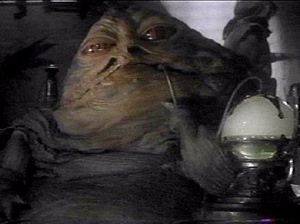 “If I told you half the things I’ve heard about this Jabba the Hutt, you’d probably short-circuit.” ?C-3PO, to R2D2. Jabba Desilijic Tiure, better known as Jabba the Hutt, was one of the most notorious Hutt crime lords in the galaxy, who governed a large criminal empire located in the Outer Rim Territories from his palace on Tatooine. At the height of his power, Jabba was one of the most powerful crime lords in the galaxy. Vaguely slug-like in overall appearance, Jabba had a wormy, wriggling body overgrown with flab and bulk and, though once able to get around by crawling, used a hovering platform to move. His arms were about as useful as short, stumpy limbs can be and were able, barely, to feed the Hutt’s massive mouth with its lolling tongue. As with all Hutts, Jabba was, much to Luke’s chagrin, immune to the Jedi Mind Tricks. His arrogance was to be his undoing and his ‘pet’, the slave Leiah, would strangle the life out of him with the very tether he’d had her collared to.

A Little Bit of Trivia: In the classic Star Wars spoof Spaceballs Jabba (and Pizza Hut) are spoofed in the form of “Pizza the Hutt” who appears very briefly at the beginning of the movie and is mentioned toward the end as having eaten himself to death.