Since its launch in 2010, the History channel’s hit show Ancient Aliens has entertained viewers with thought-provoking and controversial evidence of “ancient astronaut theory”—the idea that historical texts, stories, and artifacts prove contact between aliens and our ancestors.

Despite a huge audience, the show has been heavily criticized by the scientific community. But are Erich von Daniken, Giorgio Tsoukalos, and the countless other authors, radio hosts, and even religious leaders who appear on Ancient Aliens really so crazy?

In 2012, one study showed that 77 percent of Americans believe that there is proof that aliens have visited Earth. Also, although many claims by Ancient Aliens have been debunked, many prominent scientists believe that extraterrestrial life does exist.

But, in some cases, the theories and evidence shown on Ancient Aliens are just straight-up crazy.

10 Jonah Was Swallowed By An Alien Submarine

Giorgio Tsoukalos on Jonah and the Whale

Ancient astronaut theorists love to study old religious texts. In particular, the Bible is an infinite well of inspiration. Although many Bible stories may be based on some kernel of truth, the story of Jonah being swallowed by a whale is one of the more bizarre tales. In fact, some people believe this to be a parody of early Greek myths.[1]

Ancient Aliens and Giorgio Tsoukalos believe that the story of Jonah’s miraculous survival is true. Further, Tsoukalos points out that in some versions Jonah notices that the “ribs” of the whale are gleaming bronze. Tsoukalos concludes, “Jonah was, in fact, not swallowed by a whale . . . but by a U.S.O. An unidentified submersible object.”

That is, if it happened at all. 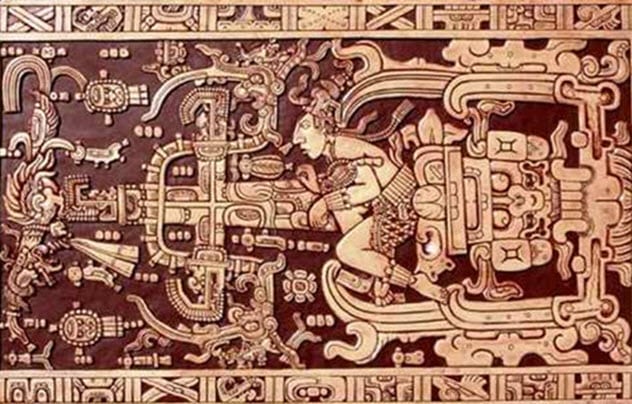 K’inich Janaab’ Pakal was the ruler of the Mayan city-state of Palenque in the seventh century A.D. Upon his death, he was placed inside an ornate coffin and sealed in a tomb within the Temple of the Inscriptions.

When archaeologists uncovered his tomb, they remarked on the decorative sarcophagus lid and called it an example of classic Mayan art. The common iconography made it easy for scholars to interpret the symbols and themes of the artwork.[2]

On the other hand, ancient astronaut theorists consider this one of their best pieces of evidence. Erich von Daniken believes that the artwork is “incredible . . . absolutely proof for extraterrestrials.”

According to the theorists, the artwork on the lid of Pakal’s sarcophagus depicts an astronaut ascending into space on a rocket. Allegedly, his hands are manipulating controls, his feet are on pedals, he is wearing a breathing tube, and exhaust is firing from the bottom of the rocket.

The problem with the ancient alien theory?

Each example was either a well-known Mayan symbol or was just too far of a stretch. Also, would extraterrestrials really use technology as primitive as a rocket?

But above all else, it just doesn’t really look like a rocket.

8 Hybrid Creatures Are The Result Of Genetic Testing 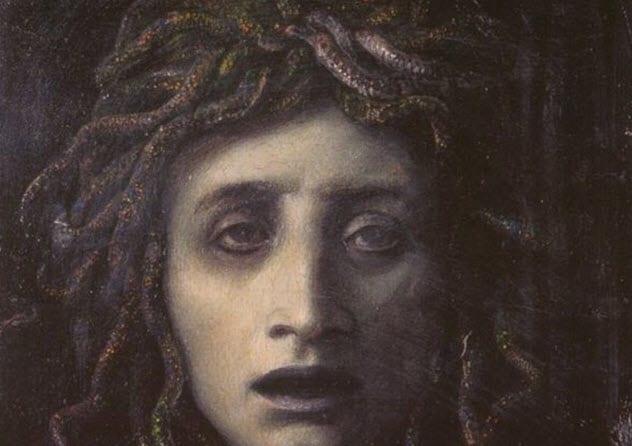 Historically, there has been no shortage of “mythical beasts.” Various stories tell of animals like the griffin (half lion, half eagle) or Medusa, a monster from Greek mythology whose hair was a tangled mess of venomous snakes. Many ancient religious figures were hybrid creatures. In fact, almost all Egyptian gods sported animal heads on top of their human bodies.

Some ancient astronaut theorists think these tales have an explanation—ancient alien genetic experimentation.[3] After all, humans themselves have begun to dabble in genetic engineering. As the theorists ask, is it so crazy to believe that ancient visitors would have done the same?

However, the theory rests on the fact that these creatures actually existed. Even today, we tell silly stories of creatures—like “Nessy” or Bigfoot. (Oh wait, they think aliens are behind Bigfoot, too).

It is more likely that these creatures are the result of human imagination and not alien scientific experimentation. For example: Even if aliens were able to give snake hair to Medusa, it was also reported that one look into her eyes was enough to turn anyone into solid stone. We’re not quite sure how they worked that part out.

7 Teotihuacan Is A Computer . . . Or Something 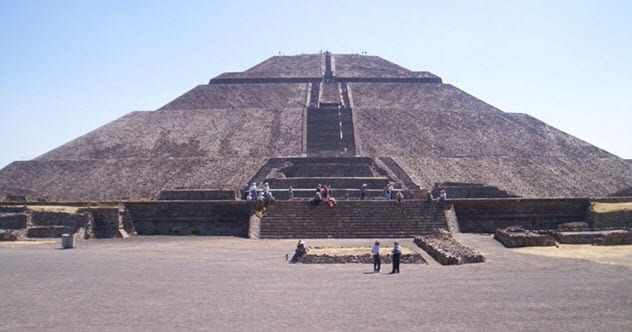 Teotihuacan is an ancient Toltec city near what is now Mexico City. Much of the site is devoted to religiously inspired temples and monuments, including the famous Pyramid of the Sun.

Ancient astronaut theorists believe that it is also a giant computer circuit board—mainly because, well, the layout “resembles one.” Many articles and documentaries from the community reference this fact.[4]

What about it specifically looks so much like a circuit board?

Actually, not too much. The theory also claims that some of the temples are “processors” but without much reason why. But the theorists go further by pointing out that electricity-conducting mica was incorporated into some of the structures and a few underground rooms were filled entirely with mica.

However, many ancient civilizations were known to use mica. Even though the mica rooms are a little curious, almost nothing about Teotihuacan is even remotely like a circuit.

6 Sword In The Stone

Giorgio Tsoukalos on The Sword in the Stone

The legend of the “sword in the stone” is one of the most famous tales of King Arthur. However, the Celtic legend of a magical weapon, only movable by one divine figure, is not necessarily unique. It is quite similar to the Norse god Thor’s hammer and countless other folktales. In addition, historians have been hard-pressed to find any evidence that King Arthur actually existed.[5]

However, according to some proponents of the ancient astronaut theory, not only is the story of King Arthur pulling a magical “unmovable” sword from the stone absolutely true but it also involved aliens.

Tsoukalos points out that this kind of technology could have existed because modern tech has the capability of creating concept firearms with a kind of biometric security. Tsoukalos also believes that Arthur’s other sword, Excalibur, as well as Joan of Arc’s sword were “alien laser weapons.” 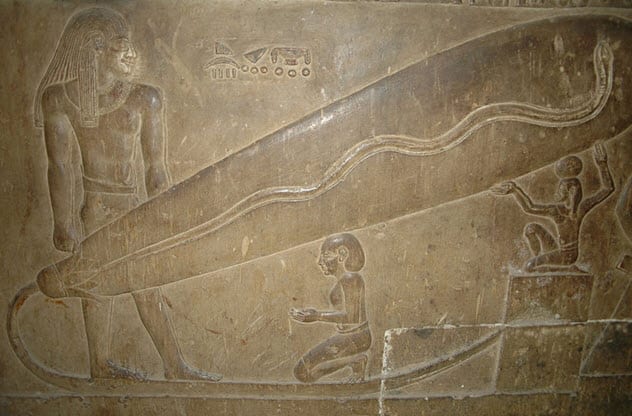 Similar to Pakal’s rocket, this theory begins with an image that allegedly depicts modern technology. However, this one actually does look a lot like the modern artifact it is purported to depict: a light bulb.

It also looks like something else . . . a depiction of Egyptian mythology using typical Egyptian symbols. Specifically, it resembles an Egyptian version of the “creation” myth. In the Heliopolitan version, Atum (a serpent) emerges from a lotus flower into the universe or, as it was imagined, a bubble of air in a dark infinite ocean.

This mainstream view seems to match up as the base of the bulb is a perfect example of an Egyptian lotus flower. Upon closer viewing, the “filament” quite clearly has a serpent’s mouth and eyes.[6] 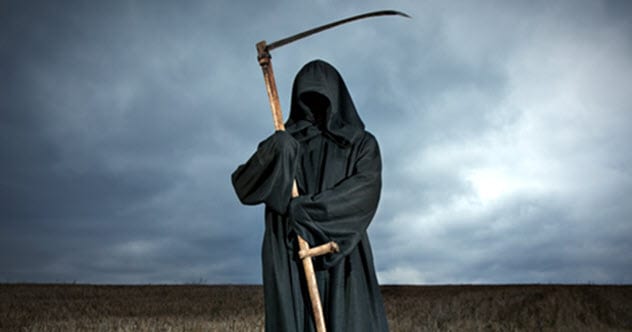 In the Middle Ages, people might have believed this while the Black Death was still destroying the European population. After all, they blamed demons, witches, and even the Jews. Though modern science attributes the outbreak to fleas carrying the Yersinia pestis bacteria, ancient astronaut theorists, like author William Bramley, blame extraterrestrials.

To explain how the aliens infected us, the theory employs another fringe favorite: chemtrails. Basically, humans were sprayed with toxic fumes in the same way that farmers spray their crops with pesticides. Possibly, this happened for the same reason—or maybe just for the sake of experimentation.

People may also remember that the “Grim Reaper” emerged around this time. Apparently, some delirious victims of the plague hallucinated images of a dark hooded figure. In the hysteria, people also reported hooded figures appearing in the wheat fields right before the plague struck a particular town.[7]

The Grim Reaper soon became the most iconic personification of death. If it wasn’t chemtrails, then some theorists suggest that the extraterrestrials may have used a more “personal” touch. They simply gassed our food supply from up close while dressed in black cloaks.

3 Nazis Had Help From Extraterrestrials 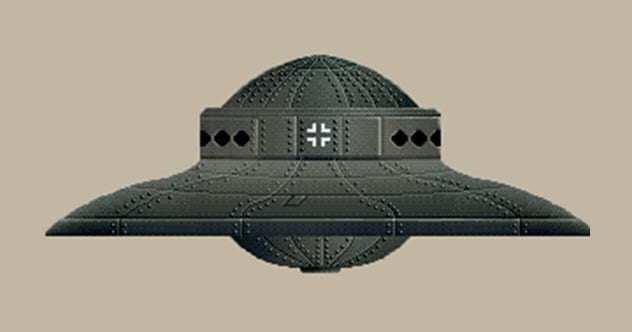 On the History channel, Ancient Aliens asks us this question: Did Adolf Hitler base his plans for world domination on secret extraterrestrial knowledge? The answer, of course, is no. But apparently, a lot of people are into the whole Nazi UFO thing.

Truth be told, the Nazis did have some advanced technology when it came to rockets. They developed both the V-1 flying bomb and the V-2 rocket during the war and used them with great success against England and France.

According to Ancient Aliens, German rocket scientist Hermann Oberth claimed that this technology was only possible because they had help from “beings from another world.” This suggests that the Nazis had contact with aliens.

The UFO community also talks about the Nazis quite a bit. The term “foo fighter” refers to the numerous stories of strange aerial phenomena observed by Allied pilots over Germany.

Also, the idea that the Germans were trying to build a fleet of saucer-shaped craft called “Haunebu” has been around for a while. According to these theories, the technology for such a craft was acquired when German engineers reverse engineered an alien spacecraft that had crashed in the woods of Bavaria.[8]

In ancient astronaut theory, a recurring theme is the ancient depictions of extraterrestrials and their vehicles as godlike creatures with heavenly chariots. Nowhere is this imagery more present than in ancient Hindu texts, such as the Mahabharata, which reference flying palaces or thrones known as vimanas.

According to Ancient Aliens, these craft, which are allegedly piloted and inhabited by mythical beings, are actually the confused interpretations of ancient people witnessing alien technology.

While some descriptions of vimanas seem curiously similar to metallic flying saucers, the majority of vimana depictions describe a very human chariot pulled by flying horses.[9] 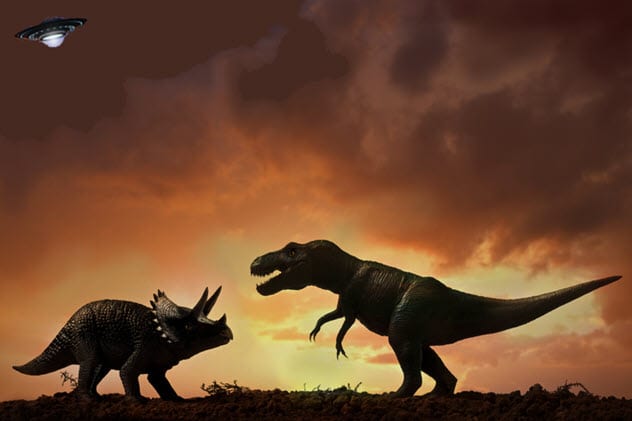 This one is one of the hardest to understand. In fact, Episode 10 in Season 4 of Ancient Aliens does little to explain why this extermination occurred . . . except perhaps to make way for humans.

In this scenario, benevolent extraterrestrials chose to intervene in the continuous conflict between ancient humans and their formidable dinosaur opponents. The show does depict flying saucers hunting down T. rex herds with laser weapons. But the program also presents an alternative: Dinosaurs were simply genetically modified by extraterrestrials to be smaller and friendlier.

When it comes to evidence, Ancient Aliens does not have much to offer. Instead, they lean on creationist authors to convince viewers that humans and dinosaurs coexisted. To support these claims, they point to the supposed inaccuracy of carbon-dated fossils, rocks containing both dinosaur and human footprints, and ancient artwork depicting their coexistence.

Unfortunately, all the evidence presented has been thoroughly debunked.[10]