I have always admired Harry Truman for his plainspoken common sense, his zero tolerance policy for bullshit, his sharp wit, and blunt honesty. It’s too bad we don’t have a president like him today. Truman was the last president not to have a college degree, but he was in no way uneducated. A lifelong, avid reader, he was self-educated and could have easily run intellectual circles around the present resident of the White House. He also has the distinction of being the last president who did not leave the presidency as a millionaire. Here is a list of 25 Truman quotes. 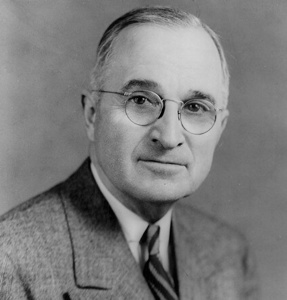 1. There is nothing new in the world except the history you do not know.

3. If you can’t stand the heat, get out of the kitchen.

4. A bureaucrat is a Democrat who holds some office that a Republican wants

5. All the president is, is a glorified public relations man who spends his time flattering, kissing and kicking people to get them to do what they are supposed to do anyway. 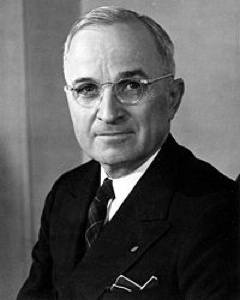 6. Being too good is apt to be uninteresting.

7. Experience has shown how deeply the seeds of war are planted by economic rivalry and social injustice.

9. I never did give anybody hell. I just told the truth and they thought it was hell. 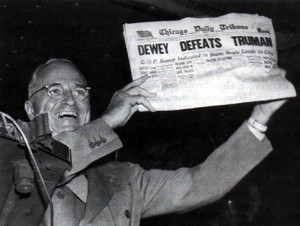 12. My choice early in life was either to be a piano-player in a whorehouse or a politician. And to tell the truth, there’s hardly any difference.

13. Richard Nixon is a no good, lying bastard. He can lie out of both sides of his mouth at the same time, and if he ever caught himself telling the truth, he’d lie just to keep his hand in.

14. When even one American-who has done nothing wrong-is forced by fear to shut his mind and close his mouth-then all Americans are in peril.

15. You and I are stuck with the necessity of taking the worst of two evils or none at all. So-I’m taking the immature Democrat as the best of the two. Nixon is impossible. 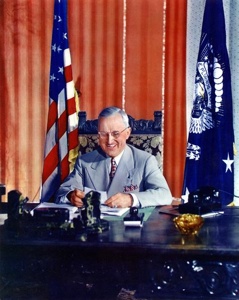 16. You know that being an American is more than a matter of where your parents came from. It is a belief that all men are created free and equal and that everyone deserves an even break.

17. The Republicans believe in the minimum wage — the more the minimum, the better.

19. Upon books the collective education of the race depends; they are the sole instruments of registering, perpetuating and transmitting thought.

20. Republicans don’t like people who talk about depressions. You can hardly blame them for that. You remember the old saying: Don’t talk about rope in the house where somebody has been hanged. 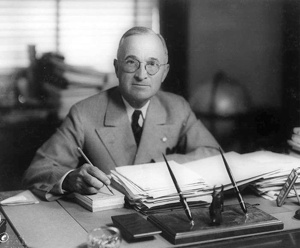 21. These polls that the Republican candidate is putting out are like sleeping pills designed to lull the voters into sleeping on election day. You might call them sleeping polls.

23. Any denial of human rights is a denial of the basic beliefs of democracy.

24. There isn’t any doubt that a woman would make a good president. They make good senators, good members of the House of Representatives, and have held other important offices in the government of the United States.

25. I do not understand a mind which sees a gracious beneficence in spending money to slay and maim human beings in almost unimaginable numbers and deprecates the expenditure of a smaller sum to patch up the ills of mankind.