I’m a big fan of horror movies, and especially of a good vampire movie. While there are tons of cheap crap vampire movies out there, there are is also a wide array of great vampire movies that, best of all, vary greatly from one film to another. The trouble with making a top ten list for vampire movies is that some people like vampire comedies, others like the strange surreal vampire films, while others want blood and guts and the scariest movie they can find. 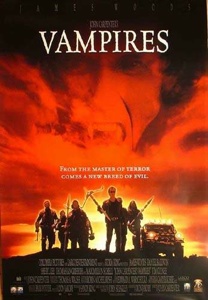 John Carpenter’s Vampires is one of the better recent vampire movies that actually takes the effort to be a vampire movie, and not an action film disguised as a vampire movie. James Woods plays the role of the main protagonist, a vampire hunter who is obsessed with wiping out vampires with his team after he witnessed his parents murdered by vampires when he as a child.

He discovers that a group of vampires are searching for a powerful doom for mankind. The Vatican then secretly enlists a team of vampire-hunters, led by Jack Crow, to hunt down and destroy the vampires before they find a crucifix that would give them the power to walk in the day.

After destroying a nest of vampires, Valek, the vampire master, comes after Jack and his team, leading to a fast paced action based movie that still focuses mostly on vampires against the human vampire hunter. A great action paced film that is mostly action based, but definitely has its moments of out right terror. 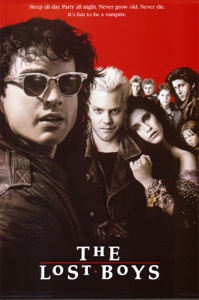 This is a favorite among many vampire movie fans, and will almost always pop up on a top ten list of vampire films. This Joel Schumacher film is also pop culture famous because it featured the two Coreys at the height of their teenage heart throb popularity in the late eighties.

Don’t let this scare you away, this is good for a vampire movie, and it is a very traditional story in a modern setting, mixing the two well without bastardizing either. A single mother and her two sons move to a small coastal California town. There are some mysterious deaths, as well as a pesky motorcycle gang. The younger brother makes friends with imaginative boys who claim to be vampire hunters. The older brother falls for a beautiful girl and then begins acting stranger and stranger while exhibiting all the classic signs of vampirism.

Wanting to save his brother, the younger one joins his friends the vampire hunters to search for the head vampire and to destroy it in order to return his brother to normal. An excellent modern vampire tale that is a delight to vampire movie fans. 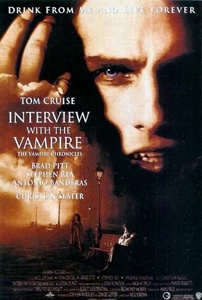 Interview with a Vampire is based on the best selling novel by Anne Rice. This novel, and the movie that follows it rather closely. This is what you would consider the “high end” or “high art” type of vampire movie. Literary, and based on story and theme rather than general genre considerations.

Interview with a Vampire is about a plantation owner named Louis who lost his brother and his will to live, but a vampire named Lestat likes the man and offers him the chance to become a vampire. Louis accepts, but finds that he hates being a vampire and he refuses to take human life. The two of them end up turning a little girl into a vampire, and she becomes the reason for Louis to continue to live, as the two live together as family through the centuries that follow the 1700s.

The interview comes as a young journalist finds a man who tells him he is a vampire who is over 200 years old, and he tells his story of life as a vampire. The movie is like the novel, following the philosophy and reflections of this vampire who refuses to take human life. This is a very different, change of pace vampire film that will find its fans, and was critically acclaimed for good reason. 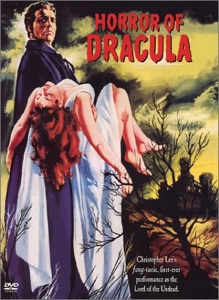 The 1958 version of the film Dracula was ground breaking in many ways, and is the first of eight movies in the “Hammer” series. Christopher Lee plays Dracula in nearly all of these films, and the “Hammer Series” of Dracula films remain classics among vampire fans. In this first film, the protagonist, Jonathan Harker, attacks Dracula at his castle (apparently somewhere in Germany). He fails, and Dracula travels to a nearby city, where he preys on the family of Harker’s fiancée. The only one who may be able to protect them is Dr. Van Helsing, Harker’s friend and fellow vampire hunter.

This movie was directed by Terence Fisher, and it is a British film that was released n the United States as “Horror of Dracula.” While fairly tame by today’s standard, this film was ground breaking for its combination of romance/sexuality, and what was an unprecedented amount of gore. 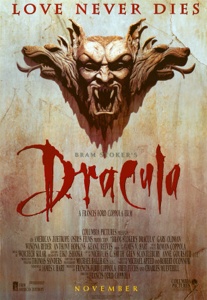 This film reintroduced Dracula to a modern Hollywood audience, and is one of the first vampire films to have a huge Hollywood budget. With an amazing cast of actors and a great director (Francis Ford Coppola), this film won a large number of awards, especially for technical achievements. This is a visually stunning movie, and even Keanu Reeves’ iffy acting can’t bring down the overall film.

This version of Dracula is closely based (for a Hollywood film) on Bram Stoker’s classic novel of the same name. A young lawyer (Jonathan Harker) is assigned to a gloomy village in the mists of Eastern Europe. He is captured and imprisoned by the undead vampire Dracula, who travels to London, inspired by a photograph of Harker’s betrothed, Mina Murray. In Britain, Dracula begins a reign of seduction and terror, draining the life from Mina’s closest friend, Lucy Westenra. Lucy’s friends gather together to try to drive Dracula away, and a final confrontation is inevitable.

This was the ninth highest grossing film worldwide in 1992, making over $215 million dollars, and it was not just a U.S. success, but worldwide. This is one of the best vampire movies ever made. 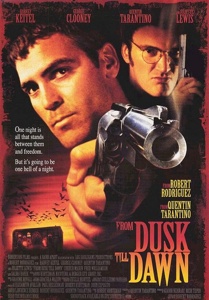 Robert Rodriguez directs this vampire movie, which was co-written by Quentin Tarantino. This is celebrating one of the best “pulp” vampire movies, complete with sexy half naked women vampires, a modern situation, a vampire “nest” and a mass feeding, with the innocent heroine who you know will somehow make it through, but only after kicking vampire ass!

Seth Gecko and his brother Richard are in hiding after a bloody bank robbery in Texas. They escape across the border into Mexico and will be home-free the next morning, when they pay off the local kingpin. They just have to survive ‘from dusk till dawn’ at the rendezvous point, which turns out to be a strip joint that, unbeknownst to them, is also an active vampire nest.

The Gecko brothers are fugitives, and are on the run after a very interesting bank robbery. They kidnap the Fuller family, and drive to a Mexican bar to meet with other on-the-run criminals. The two fugitive brothers at gunpoint get an ex-minister and his two children to take them across the border into Mexico. They drive to a Mexican biker bar to meet with the other crooks, but the vampires go nuts, and the survivors must fight their way out to morning. This is the epitome of a pulp vampire film. 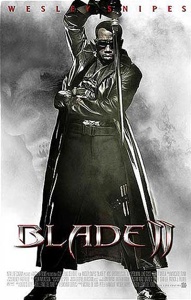 Blade is the first transition of a comic/graphic novel into an action based series. This is as much an action film as a vampire film, and shows where the next evolution of the modern vampire film may be going, as the later film Underworld proves that the trend is likely to continue.

The movie begins with a pregnant woman being admitted to a hospital, bleeding from the neck. Paramedics think she was attacked by some type of animal. Doctors perform an emergency C-Section, and her baby (a boy) is born alive just as she dies. This is the birth of Blade, played by Wesley Snipes, who is half vampire and half human, so he can walk during the day, and hunts vampires.

Blade works with his mentor, Whistler, to hunt vampires. With the help of a young woman, bitten, who Blade saves from a vampire attack, Blade is forced to fight a vampire Deacon Frost, who is attempting to unlock an ancient ceremony in order to turn from a vampire into La Magra, the Blood God. Blade fights La Magra, and the battle takes place to see whether the day walking vampire can defeat the blood god or not. This is a great action flick, and there are plenty of very good vampire scenes throughout the film. 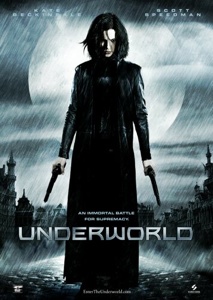 This movie embraces the idea of the Vampire-Werewolf rivalry, and in this film this rivalry is an all out war, with the werewolves finding new weapons to attack the vampires, and the vampires realizing they need to catch up. This war is brought into the modern day, and this is once again a comic book based movie that is as much action movie as it is a vampire and werewolf movie.

The vampire Selene, who is also one of the top werewolf (called Lycans in the film) hunters, finds out about a terrible secret hidden from most of the vampires by the elders, and after finding a legend about a human who can somehow be both werewolf and vampire, making it a nearly unstoppable power, she must decide where her loyalties really lie and what this means for the war and her people.

This film has a very modern dark and gothic feel to it, with every single scene taking place at night. This is a great action flick that has some really good werewolf to vampire combat taking place. This is a very quick moving film that will find fans even among viewers who generally don’t like vampire films. 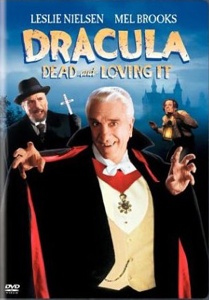 This movie is another spoof from the mind of Mel Brooks. This time he’s out to poke fun at the Dracula myth and vampire films in general. Leslie Nielsen, master actor of spoof films, is in this one as Dracula, with Mel Brooks playing his greatest nemesis, the famous Dr. Van Helsing. This film has the usual Mel Brooks spoof, with plenty of singing and dancing while poking fun at vampire movies.

Mel Brooks fans tend to like this film, while vampire movie purists don’t, but as far as having a list that shows the wide variety of vampire films out there, the list wouldn’t be complete without this one, and a laugh is a good way to end a terrifying marathon. 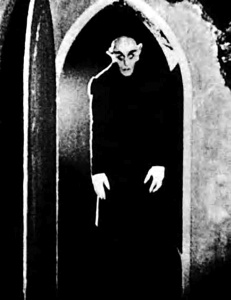 This is the grandfather of all vampire movies, a movie that never should have been made. This film is a black and white silent picture that stars Max Schrek as the creepy Count Orlock. This film was an expressionist film that remains extremely popular today, but for a weird reason: half the people who still watch this film find Nosferatu extremely creepy and scary, while the other half find it campy and hilarious.

This is one of the earliest vampire films, and after it’s release, Bram Stoker’s widow sued the director, saying this was a blatant rip off of her late husband’s novel: Dracula. The court found in her favor, and every negative of this film was supposed to have been destroyed, but pirate copies kept cropping up all over the place. Once the copyright to Dracula wore off (copyrights last 70 years after the author’s death), the movie was re-released in DVD format and is now available on DVD. Whether this movie hits you as very creepy or hilarious, it’s worth seeing.