This is a pretty lighthearted list of tips for making a clean and safe getaway from police pursuits, learnt from years of watching police chases on TV. Even if you don’t usually root for the fleeing vehicle when you’re watching a police chase video, you might sometimes think, “Why did the guy do that?” or “I would’ve done this instead, it’s so obvious!” Well, this is a general collection of those tips you would want the guys in the videos to know.

The site, of course, does not condone any criminal acts. This list is only for fun. Attempting speeding anywhere is extremely dangerous for you and others. If you’re dumb enough to take this list seriously, then you’re not smart enough to outrun the cops. If you do decide to follow the advice here, you might also want to take a look at Top 10 Prison Survival Tips. 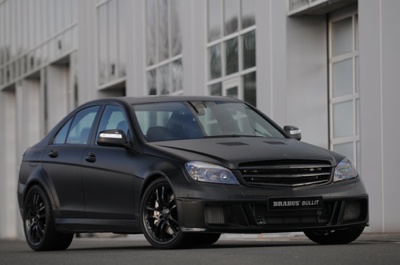 Assuming you have a choice, this tip is obvious but not at all straightforward. You have to choose a car that suits your circumstances. You may want to choose a fast, fancy sports car; but it may draw too much attention, or run out of fuel fast, or become uncontrollable from the slightest brush with a pursuing car.

You may then go for a heavy, sturdy vehicle; so that it handles well, can endure rugged terrain, and it withstands enough damage to still make it. But one of these may be too slow, or too big for you to maneuver through traffic, and it may even flip over too easily. So, it’s not a simple decision at all; get what you think is better for your driving style and your plan. Inconspicuous cars are a good choice in general. 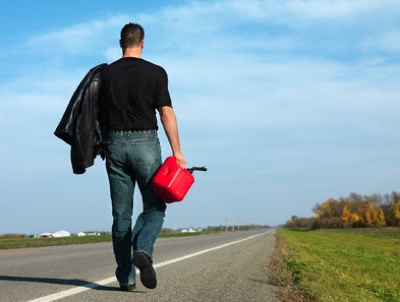 First and most evidently, fill her up! Several chases end a few minutes after they’ve started just because the speedsters forgot to fill the tank before going for it. Second, be aware of how much mileage your car can get from a full tank; this may also influence your choice in cars, depending on how far you need to go. Remember that you’ll be going fast, so you’ll be spending more fuel.

If you’re serious, you might even want to find a way to get more fuel tank space or extra mileage performance for the vehicle of your choice (requiring some ‘pimping up’ as the teens call it these days).

9
Have a police scanner 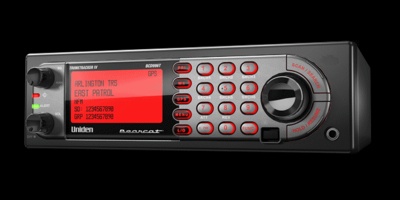 This one is fairly obvious if you want to dramatically increase your chances for escape. Having a police scanner while you’re driving means that you pretty much know what they’re planning to do to stop you, like laying spike strips and the like. It also gives you the advantage of knowing what they think you’re up to. For instance, if they lose track of you, or think they know where you’ll be going, you’ll know right away and you’ll be able to trick them by going where they don’t expect you to, leaving their cruisers in the dust.

If you’re really sly, you’d get a TV installed too. You could check out the news channel to see what the news copter is broadcasting, and get even more info from the reporters on what the police are planning (which would give you an immense advantage). 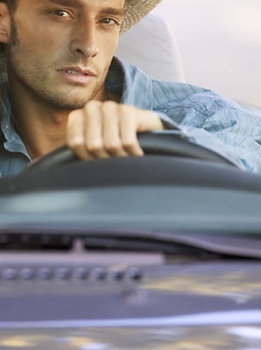 This is an obvious one too, but many ‘fugitives’ have been shown to get desperate when their car crashes, so they get out of the car and start running scared. When this happens, you know that they’re done for. Unless you severely hindered your ride, don’t get out. Police officers will be chasing you from all around, their aggressive dogs taking point, and the news helicopter will keep its camera sights on you. You simply won’t be able to escape on foot.

There is a video of a guy who got out, then got into a house, and changed clothes, coming out calmly as if he were someone else. He almost made it, except the news helicopter crew got suspicious of a guy wearing the same shoes as the fugitive, and cried foul to the cops. Try at your own risk. 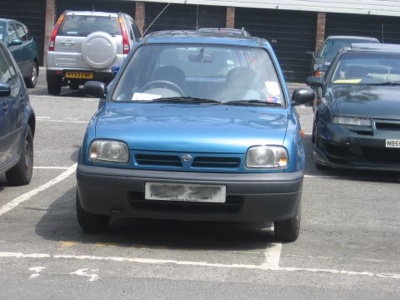 There might be situations where you might need to slow down in order to maneuver or dodge obstacles. But whatever you do, don’t make a full stop. The police will obviously catch up, and box you in against the obstacle you were trying to avoid. By extension, don’t shift to reverse unless you absolutely need to. You will need to make a full stop for starters, and obviously driving in reverse is harder. Plus, you will need to stop yet again to shift back to normal, and by that time there will be police cruisers all around you. Also, if you stop, citizens may attack you. (Especially if you’ve given them reasons to be angry at you, judging from the news broadcast.)

This is several tips in one, really. First, plan your route. Notice danger points, and alternate routes you can take. That way you won’t be running in circles until you run out of gas. You’ll know where to go, and where to detour if things get hairy.

Second, whatever you do, don’t go off-road! Even if you have a vehicle suited for off-road, it’s risky. You may end up sunken in hidden curbs, or simply stuck in mud. Even if you’re lucky to find a clear off-road area, you’ll inevitably slow down, and the cops will catch up eventually.

Also, you need to get familiarized with the turns you’ll be making and how your ride handles them. It sounds pretty dumb, but many car chases have ended from the driver overshooting the turn and running into a light pole he could’ve easily avoided otherwise.

Finally, please don’t go back to your neighborhood. You may think this is a good idea because you’re familiar with the area, but it’s not. If it’s a small neighborhood, you’ll need to slow down to take turns, and there will be bigger chances for the police to seal off the area, leaving you without escape.

5
Slow down at intersections 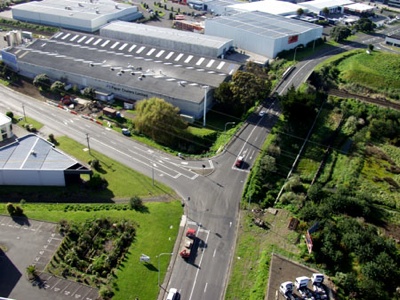 This one sounds pretty contradictory, to say the least. Why would I want to slow down if I’m being chased, for crying out loud! Actually, it’s very recommendable to slow down and look out when you’re crossing intersections, whether they have stoplights or not.

The most horrible endings to police chases happen at intersections. Your car gets smashed by an 18-wheeler running across, or you hit a jeep making a turn, and you careen out of control into a row of cars stopped at a red light. Very gruesome, and you and many innocents can get hurt; and you don’t want that. So, slow down, look both ways, and plan your moves accordingly. If you get a red light, you have to be extra careful.

This also applies to railroad crossings; those freight trains will literally annihilate you if you don’t pay attention. 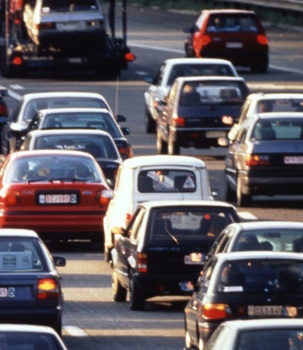 This is usually risky but effective. It’s certainly more effective than changing clothes or staying on a damaged or useless car. It’s much more preferable to do it indoors at a public place, such as a parking building.

Quickly get out of your car and choose a car of a different color, even if it’s a similar model to yours. It’s actually better if you choose a car that’s similar to yours, because you’re already used to how your own vehicle handles, and you don’t want to lose control of your ride just because you’re not used to how it handles. Then, take your chosen vehicle out inconspicuously, and hopefully you’ve bedazzled the cops and the helicopters with the switch, at least for a while. 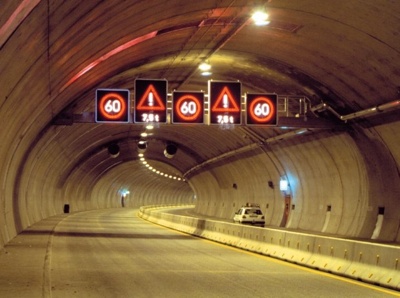 This tip is critical if you want to lose the cops completely. The helicopters over your head, be it the police chopper or a local news copter, will be aiming their cameras at you all the time. This means that even if you’ve lost the police cruisers behind, they still know where you are thanks to the helicopters, and will eventually catch up to you again.

Unless, of course, you’re able to stay out of their sights. Try going under a roof, a parking building for example, and get out through the least obvious path. The idea is to take cover, then take unusual roads so the helicopter cams won’t know where to look when they expect you back in the clear. If you’re at an area full of trees, you might get a chance to lose them, too.

But losing the helicopters doesn’t mean you’ve won. You’ll need to be conspicuous while driving and pray that they won’t find you again. 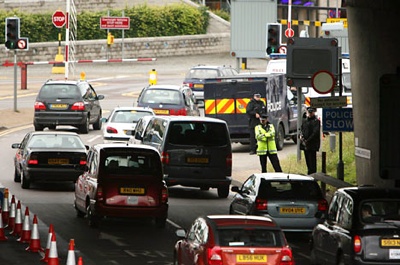 This is a procedure that the police is very proud of, and get extensive training on. The PIT (usually meaning Pursuit Intervention Technique) Maneuver consists of a police cruiser approaching the fleeing car by one side, until the cruiser’s front wheels are roughly aligned with the speeding vehicle’s back wheels. Then, the police car steers sharply, hitting the trunk of the criminal’s car; and making it spin out, usually to 90 degrees from the road, and straight into a ditch or a wall. It’s very effective and very common.

So, if you see one of the pursuing police cars approaching you to one side, either fully accelerate your car (if you’re not already) in order to dodge the hit. Or, slow down all of a sudden, so that you hit the front of the police car first, or the cruiser only hits you innocently on the side.

1
Get to an airport 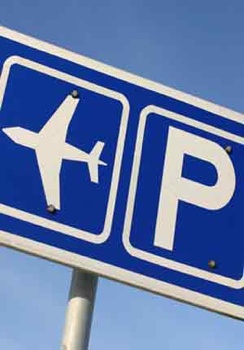 This is the ultimate getaway tactic, depending on the circumstances. You don’t even need to buy a ticket! (Or hijack a plane either.)

What you need to do is get to the airport quickly. Once near, the helicopters won’t be able to chase you anymore because it’s restricted airspace for them! That’s really good for starters. Then, you need to go into the airport parking area. This is the key moment: you may want to get into the airport, buy a ticket, and fly off into the sunset. But, this may be hard because the police may have warned the airport and they would be looking for you all over.

Instead, you could change your car for one of the cars in the parking area, and drive out inconspicuously, leaving the police desperately looking for you at the airport! A clean and successful escape. 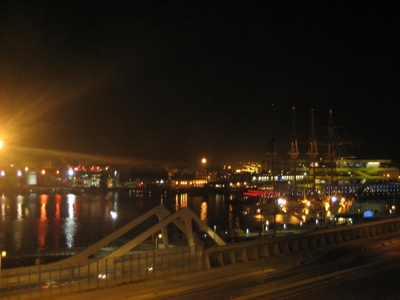 This is a difficult choice to make, because both times have pros and cons. If you make your getaway during the day, the road you’re on will be clearly visible, as well as any obstacle on the way, so it’ll be easier to maneuver through. But, you’ll be clearly visible to the cops too, so they will be harder to lose.

If you make a run for it during the night, the cops and helicopters might have a harder time keeping an eye on you. But, it will be harder to notice obstacles and the like, so it’s riskier. Plus the floodlight that the police chopper puts on you lets them see you clearly while probably hindering your vision (plus it seems to be very annoying for you).