It’s amazing how many people nowadays have bizarre and unusual names. Most changed their names via deed poll, but a few were born with that given name, and very few have gone on to live successful lives regardless of their name. The following people have fantastic or apt names, all are their original birth names, and all have achieved some sort of fame outside of their name. 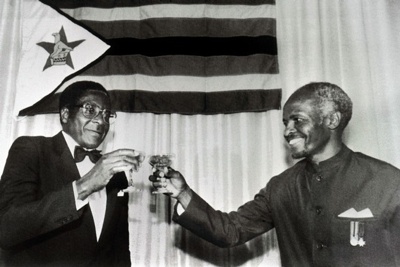 Canaan Banana served as the first President of Zimbabwe from 18 April 1980 until 31 December 1987. A Methodist minister, he held the largely ceremonial office of the presidency while his eventual successor, Robert Mugabe, served as Prime Minister of Zimbabwe. Banana was later convicted on charges of sodomy and imprisoned. He died 2003. Mr Banana is pictured above on the right. To his left is evil despot Robert Mugabe.

Praise-God Barebone was an English leather-seller and radical preacher. He is best known for being elected to the Nominated Assembly of the English republic, in 1653. The Assembly was known commonly as Barebone’s Parliament due to its domination by religious and political eccentrics such as Praise-God, who was a Fifth Monarchist and believed in the imminent end of the world and return of Jesus. He died in 1679.

Baron Brain was an eminent neurologist who authored the standard work on the subject, “Brain’s Diseases of the Nervous System”, and long time editor of the neurological medical journal Brain. He was knighted in 1952 and made Baron Brain in 1962. He died in 1966.

Marc Breedlove is a Professor of Neuroscience at Michigan State University. He is known for his work into the study of sexual attraction and sexual behaviour. His most influential work was in discovering that lesbians have a more masculine digit ratio than straight women, a finding that has been replicated in his and many other labs and which indicates that lesbians, on average, are exposed to more prenatal testosterone than are straight women.

Thursday October Christian was the first son of Fletcher Christian (leader of the Mutiny on the Bounty) and his Tahitian wife Maimiti. He was conceived on Tahiti, and was the first child born on the Pitcairn Islands after the mutineers took refuge on the island. Born on Thursday the 14th of October, he was given his unusual name because Fletcher Christian wanted his son to have “no name that will remind me of England”. He died in 1831. 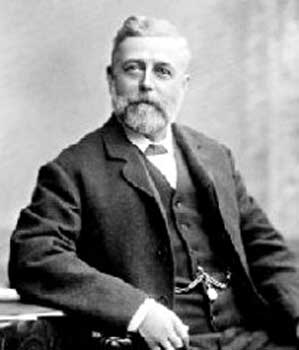 Crapper was a noted English plumber who made significant contributions towards the improvement of the flushing toilet. He held many toilet related patents, including the floating ballcock, and founded the plumbing company Crapper and Co. He died in 1910. Mr Crapper is pictured above.

Prince Octopus is an amateur boxer from Ghana who competed in the 2008 Summer Olympics and the 2006 Commonwealth Games.

Fucks is a Brazilian professional footballer. He won the Rio Grande do Sul State league, the Brazilian cup, the Brazilian Champions Cup, the Conmebol Cup plus the Portuguese league, cup and Supercup. He also represented Brazil internationally at the Under-20 level winning both the South American Championship and the Youth World Cup.

Learned Hand was an influential United States judge and judicial philosopher. He served on the Southern District Court of New York and the United States Court of Appeals for the Second Circuit. Hand has reportedly been quoted more often than any other lower-court judge by legal scholars and by the Supreme Court of the United States. He was a stronger supporter of civil rights, civil liberties and judicial restraint. He was an expert in statutory law in patents, torts and antitrust. His writings remain admired in the history of legal literature. He died in 1961.

Ima Hogg, known as “The First Lady of Texas”, was an American philanthropist, patron and collector of the arts, and one of the most respected women in Texas during the 20th century. She received an honorary doctorate in fine arts from Southwestern University, and was a large contributor to Houston’s Museum of Fine Arts. Very wealthy due to her family’s oil business, Hogg founded the Houston Child Guidance Center, which provides counselling for disturbed children and their families. She also established the Hogg Foundation for Mental Health at the University of Texas at Austin in 1940. Hogg successfully ran for a seat on the Houston School Board in 1943, where she worked to remove gender and race as criteria for determining pay and established art education programs for black students. Hogg never married, and died in 1975. 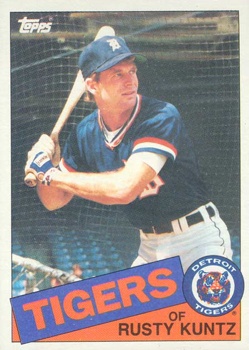 Kuntz is a former Major League Baseball player and currently first base coach for the Kansas City Royals. He was part of the Detroit Tigers that defeated the San Diego Padres in the 1984 World Series. Mr Kuntz is pictured above.

Chuck Long is the head football coach at San Diego State University. He played quarterback in college at the University of Iowa and professionally with the Detroit Lions and the Los Angeles Rams. He is an inductee of the College Football Hall of Fame.

Adolf Lu Hitler R. Marak is a politician in the state of Meghalaya, India. It may be noted that his name is not particularly curious within Meghalaya, where other local politicians are named Lenin R. Marak, Stalin L. Nangmin, Frankenstein W. Momin, or Tony Curtis Lyngdoh. Hitler Marak told the Hindustan Times: “Maybe my parents liked the name and hence christened me Hitler… I am happy with my name, although I don’t have any dictatorial tendencies.”

Ten Million was a minor league baseball player who played for various teams in the Northwestern League in the years prior to World War I. He is most famous for appearing on the first set of Obak baseball cards where he became very popular due to his name. He died in 1964.

Chris Moneymaker is an American poker player who won the main event at the 2003 World Series of Poker. His victory is generally credited for being one of the main catalysts for the poker boom in the years following his win. He is one of the most successful poker players currently touring with total live tournament winnings of over $2.8 million. 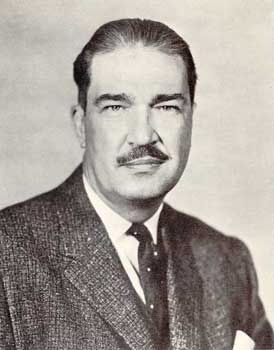 Revilo Oliver was an American professor of Classical philology, Spanish, and Italian at the University of Illinois at Urbana-Champaign, who wrote and polemicized extensively for White Nationalist causes. Oliver also briefly received national notoriety in the 1960s when he published an article following the John F. Kennedy assassination, suggesting that Lee Harvey Oswald was part of a Soviet conspiracy against the United States; in response, he was called to testify before the Warren Commission. As per family tradition, his name is a palindrome. He died in 1994. Mr Oliver is pictured above.

Richard Plantagenet Campbell Temple-Nugent-Brydges-Chandos-Grenville was British statesman and close friend of Benjamin Disraeli. His name arose through successive generations of people with double barrelled surnames adding and adding instead of compromising. He died in 1889.

Peerless Price is an American football wide receiver who is currently a free agent. He was originally drafted by the Buffalo Bills in the second round of the 1999 NFL Draft, and has also played for the Atlanta Falcons and the Dallas Cowboys.

Jaime Sin was a Filipino bishop who later became archbishop of the Roman Catholic Church of the Philippines and was henceforth known as Cardinal Sin. He was only the third native Filipino Archbishop of Manila, following centuries of Spanish, American and Irish episcopacy. Cardinal Sin died in 2005.

Wolfgang Wolf is a German football coach who once managed Wolfsburg FC.