The world has always had a curiosity of the unique bond that is linked with of twins. The collection of stories below are 10 interesting accounts from recent years associated with twin births. This list is not meant to be a historical look at twins, but rather some unusual recent stories – therefore it excludes people like the first siamese twins. 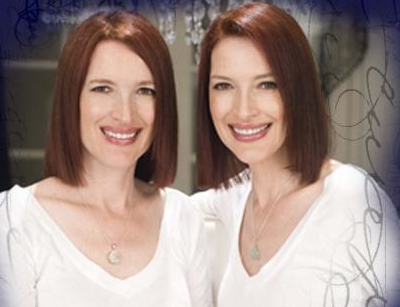 Linda and Terry Jamison are twins from the United States who claim to have predicted the September 11th attacks two years ahead of time. On November 2, 1999, they claimed that through an automatic writing process there would be a terrorist attack on the federal government and the World Trade Center in 2001. The actual quote is, “we are seeing various terrorist attacks on federal government and also the New York Trade Center, the World Trade Center”. The twins did not specify the time or indicate who would be responsible. The Jamison twins also predicted that John F. Kennedy Jr. would die by plane crash. However it has been pointed out that the Jamison twins are frequently incorrect. In December 2003, they incorrectly predicted that Saddam Hussein would be killed by U.S troops and that Pope John Paul II would die in June 2004.

70 year old Omkari Panwar and her husband 77 from India already have two adult daughters, and five grandchildren. Male children are especially important among India’s Hindus. Only a male heir can carry out funeral rites and female infanticide remains a chronic problem, largely because the dowry system, though banned, is commonly practiced. Their male child will also be able to work the families land. To pay for the IVF treatment vital to producing a male heir to the family’s smallholdings, they sold their buffalos, mortgaged their land, spent their life savings and took out a credit card loan. Mrs. Panwar gave birth to twins a boy and girl by emergency Caesarean section The twins were born a month premature and weighed 2lb each but are healthy according to doctors.

8
Black and White Twins
Alicia and Jasmin Singerl b 2006 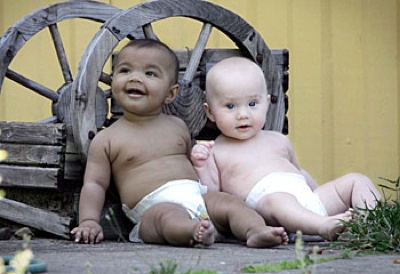 Alicia and Jasmin were born to a mother of Jamaican-English descent and a father of German descent. Alicia’s eyes are brown and her hair is dark. Jasmin’s eyes are blue and her hair is white. Genetic expert’s explanation for this very unusual occurrence is the mother has a mixture of genes that determines skin color. When egg cells are formed in the mother, a random selection of genes will be allocated to each egg. The set of chromosomes in each egg cell is unique. In most cases a mixed-race woman’s eggs will be a mixture of genes for both black and white skin. In very rare cases the eggs may contain genes for predominantly one skin color. In this case, the mother released two such eggs – one with predominantly dark pigmentation genes and one with predominantly fair genes. 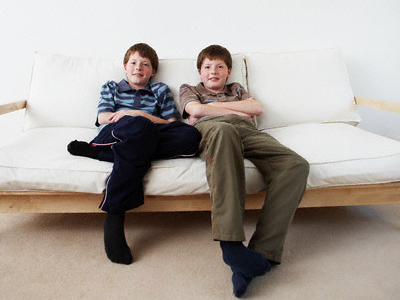 Even Though the idea of a special connection between identical twins is often myth and legend little research has been done in this field. The book ‘Twin Telepathy” claims an overwhelming body of evidence indicating that there is indeed a special connection. One of the experiments involved 8-year-old Richard Powles who was put in a soundproof room in front of a bucket filled with ice-cold water. On command, Richard plunged his arm into the ice cold water, giving a gasp as he did so. In another room well out of sight or earshot, his identical twin brother Damien was wired up to a polygraph. A polygraph expert monitored his respiration, abdominal muscles, pulse and galvanic skin response (sweat on the hands). All Damien had to do was sit quietly and “tune in” to his brother’s feelings. At the exact moment of Richard’s sharp intake of breath caused by the freezing water, there was a sudden blip on the line monitoring Damien’s respiration rate. In another experiment, Richard was asked to open a cardboard box; in it was a huge rubber snake that jumped out at him. This, too, was instantly picked up by his twin as the pulse line on the chart clearly indicated. The book also concludes there are three especially telepathy-prone groups – mothers and newborn babies, dogs and their owners, and identical twins. Of these, it is the twins who pick up the signal at full strength most often, provided that they are in the right states of mind. The image above is a stock photo as no pictures could be found of Richard and Damien. 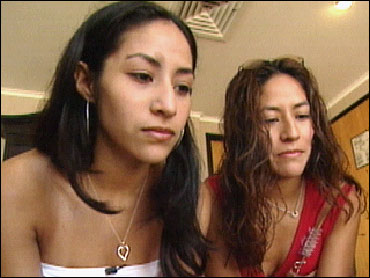 Tamara and Adriana were born in Guadalajara Mexico and were separated at birth and raised by different adoptive parents. Tamara was adopted by a Jewish couple who lived close to Central park in Manhattan. Adriana was adopted by a Roman Catholic family and grew up near Long Island just 20 miles away from where Tamara lived. Neither knew she had a twin sister. Tamara’s adoptive mother also did not know but Adriana’s adoptive mother knew but kept her twin a secret from her daughter. When the twins were 20 years old they were constantly getting confused by the other sister’s friends. Eventually mutual friends put two and two together and arranged for them to meet. Despite different upbringings, Tamara and Adriana discovered they had very lead similar lives. The twins’ adoptive fathers both died of cancer, Adriana plays the clarinet and Tamara plays the sax and they both love listening to R&B and hip hop. They also both wanted to be vets when they grew up. The reunited twins and their widowed moms have now formed a close bond. 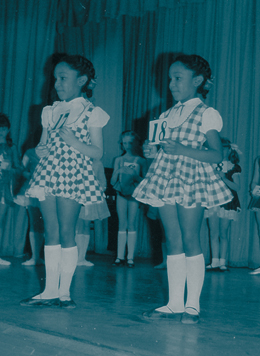 June and Jennifer grew up in Britain. The twin sisters were inseparable, and had speech impediments which made it very hard for them to mix in with other children. The Gibbons also were the only black children in their school, and faced racism. Their language eventually became unintelligible to outsiders and spoke to no one except each other and their little sister. They would complete each other’s sentences and could communicate with no more than facial expressions. In their early teens they were given two diaries as Christmas gifts. This inspired them to send away for a mail order course in creative writing, and each wrote several novels that were published. It is theorized that because they were so desperate for recognition and fame and publicity for their books, the girls committed a number of petty crimes including arson. June & Jennifer were committed to a mental health hospital where they remained for 14 years. Because of the medications given to them in the hospital they lost most of their interest in creative writing. The girls apparently had an agreement that if one died, the other must begin to speak and live a normal life. During their stay in the hospital, they began to believe that it was necessary for one twin to die. Jennifer eventually agreed to be the sacrifice. Within hours after their release at the age of 30 Jennifer died of sudden inflammation of the heart. To this day, Jennifer’s death remains a mystery. After loosing her twin, June was able to speak with other people and contemplates resuming to her writing career. 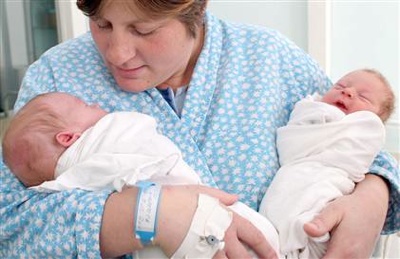 Catalin and Valentin from Romania are twins with different years of birth. Catalin was born in December (2 months premature). The doctors were able to wait and deliver her second son Valentin two months later in February. Romanian doctors attributed the time lag in the births to a rare congenital condition that gave the twins mother two uteruses due to a congenital malformation that occurred when she was herself an embryo in her mother’s womb. Approximately one in every 50,000 women has a double uterus but the hospital believes this was the first case where a woman had become pregnant at the same time in both wombs and given birth nearly two months apart. The two brothers were both healthy when they were released from the hospital on the same day.

3
Half Brother Twins
Tuen and Koen Stuart b 1993 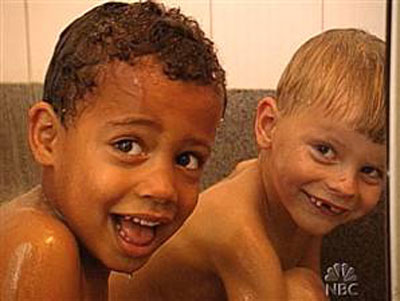 Wilma and Willem Stuart, a Dutch couple had been unsuccessfully trying to conceive for years and decided to try IVF. They soon learned they would be parents of twins. When the two boys were born, Koen had blue eyes, dark hair and pink skin, Tuen had dark eyes dark hair and brown skin. A DNA test revealed that Koen was the Stuarts child but Tuen was not Willem’s. The report of the investigation has not been made public, but speculation is that a piece of lab equipment called a pipette, like a large eyedropper, had been used twice, causing another man’s sperm to be mixed with Willem’s. The hospital called it a “deeply regrettable mistake”. The Stuarts remembered there was a black couple in the waiting room the same day during the IVF process. The hospital located the man and confirmed he was Tuen’s biological father. Although he was under no obligation to meet his son he never knew he had, he did when Koen was 18 months old. The biological father only looked at him from a distance and didn’t try to claim him and was comfortable that the Stuarts loved the child, and let them continue raising him.

Many know and have followed the story of the Hensel twins. They are now 18 and recently graduated from high school. Only four known sets of conjoined twins who share an undivided torso and two legs have ever survived into adulthood. By coordinating their efforts, they have been able to enjoy many hobbies and sports including volleyball, kickball, swimming, basketball, and cycling. Two years ago the girls passed their driver test and had to pass the test twice because each girl received a driver’s license. They also play the piano and are avid computer users. Abigail and Brittany expect to date, get married and have children. They hope that by providing some information about themselves they will be able to lead fairly typical lives. 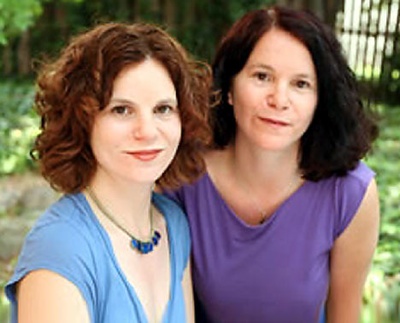 Elyse and Paula were born to a woman with schizophrenia and were put up for adoption. Child psychologist Dr Viola Bernard, a consultant to the adoption agency believed twins should be separated to improve their psychological development so Elyse and Paula were sent to different families. Elyse knew that they had been adopted but neither one knew they were twins. When Elyse turned 33 she decided to contact the New York State Adoption Information Registry to look for her birth mother. It was then that she also discovered she had a twin. About six months later the twins were reunited. What makes this story even more incredible is it was also discovered that Elyse Schein and Paula Bernstein were part of a secret nature versus nurture study by Dr Neubauer and his colleague Dr Viola Bernard. Neubauer was a noted child psychiatrist and studied five sets of twins and one set of triplets who were all deliberately separated at birth. The adoptive families would travel separately to the center once a month for 12 years for IQ tests and speech analysis. Researchers would also visit their homes and film the children playing. The adoptive parents were told they were part of a child development study but were kept in the dark about the twin/ triplet aspect. The set of triplets and two other sets of twins in the study have also been reunited, but it is not known if the remaining two sets of twins have. The controversial study has not been published, but will be in 2066, when most of the participants will likely be dead.