The opening sequences of most television shows are strictly functional. A theme song plays. Title is shown. The main cast and crew’s credits roll. But every once in a while there comes along an intro that does so much more than just introduce the show. Here are ten television openings that are truly the cream of the crop. This is obviously a highly subjective topic, so be sure to tell us your favorite intros in the comments (include youtube links if you can).

Ah, the opening that drives parents across the world insane. From its Pirate lead singer to its banshee-like chorus of children, this show’s theme song must have been designed by scientists as some sort of weapon of mass irritation.

In spite of all of this, I love this song, even to the point that sometimes I almost want to yell “Spongebob Squarepants!” along with the choir of screaming children. Almost. There is something naturally endearing about the song that continues into the show. The song can only be described as disarmingly sweet and chipper, just like everyone’s favorite sea sponge.

The opening of the sitcom Cheers is fairly run of the mill visually. An out door shot of the bar fades into a series of illustrations of turn of the century Boston. Pictures depicting the bar life of the Gilded Age pan and fade across the screen as do the opening credits.

But what makes this opening really special is the theme song. Once you have heard it there is no way to get it out of your head. I remember my parents watching this show when I was a small child. When I would hear the theme begin in the next room I would rush in and watch the opening credits. Afterward, I would leave the room to resume playing with blocks. I was completely disinterested in the actual show (in fact, I remember assuming that the show was set in the past and that the pictures on screen were of the actual cast) but I still loved to listen to the theme song. That, I believe, is a testament to just how wonderful the Cheers theme truly is.

Alright, I’ll be the first to admit that this a bit of a sentimental pick for me. After all, MST3K is my favorite television show of all time. (Shout out to All Misties Worldwide!) The opening is nevertheless brilliant. In the vein of Gilligan’s Island, the “MST3K Love Theme” explains the basic premise of the show and introduces the characters (through both normal exposition and a Robot Roll-Call).

As with many shows, MST3K went through quite a few changes over the years and the theme was updated accordingly. As a result the theme has six total incarnations from the show’s first season on KTMA public access to its final season on SciFi Channel. In spite of these changes, much of the theme remained unchanged over the years.

7
Tom Goes to the Mayor 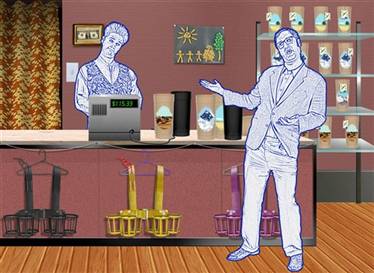 This bizarre little show from Cartoon Network’s Adult Swim block, featured what is perhaps the most bizarre opening in television history. The show itself follows Tom Peters a new resident of Jefferton who visits the town’s mayor to propose various projects, all of which backfire. The opening sequence is an ad for the town prominently featuring the slogan “Jefferton Alive!”

And that is all it is. The is no title, no credits just a thirty second ad promoting a fictional town. In a behind the scenes feature on the first season DVD, the show’s editors are having trouble cutting down the episode to 11 minutes when one comments, “Maybe its because we made a 30 second title sequence without any titles.”

In the world of nature documentaries Planet Earth is in a class all by itself. Shot over five years by hundreds of filmmakers spanning the globe, this joint production of BBC and Discovery Channel is simply awe-inspiring. Every single episode contains both interesting material and beautiful footage.

When it came to the opening the producers appear to have decided to give the viewer a sensory overload- in a very positive sense. They piece together the most unimaginably amazing shots from the series and set them to an unimaginably majestic score. The result is nothing short of epic.

If there was ever an intro that perfectly reflected the program that it preceded, it is the opening of Monty Python’s Flying Circus. The titles are immediately preceded by a haggard man who, despite being in a variety of situations would only be able to gasp “It’s!” Michael Palin who portrayed the “It’s Man” described him as “…this character who maybe one day many years ago, had been a presenter, and had been allowed to say whole sentences. But he’d fallen on hard times, and was now cut off immediately after he said just the first word.”

Following the “It’s Man” the opening credit animation would appear, set to John Phillip Sousa’s Liberty Bell March. This seemingly peculiar choice was inspired by several things, chief among them was that it was public domain and therefore free. The song, however, fits in perfectly with the show and is now more commonly identified with Python then Sousa himself.

By all accounts, Lost should not work. It is a show that seems to center on one event, getting off the island. But instead of falling into the trap that has ensnared so many other shows with a similar central event (I’m looking at you Prison Break) the creators managed to craft a show that goes beyond the perceived ultimate moment. They made viewers care about their universe, not just their island.

Similarly the show’s opening should not work. It is solely comprised of the series’ title flying across the screen as a single note plays in the background. Yes. That’s right. The theme song of Lost is a single note. And amazingly it works. “Composed” by JJ Abrams, the show’s creator, the Lost Main Title Theme fits perfectly with the tone of the show. In its inspired simplicity, that sole note manages to convey the sense of mystery and dread that is intrinsic to the series.

Perhaps the most recognizable theme song in history. Marius Constant’s odd, rhythmic theme that has been mimicked as “DOODOOdoodooDOODOOdoodoo” by countless people attempting to cleverly indicate something mysterious. Paired with swirling, surreal images the theme creates a clear feeling of suspense that is impossible to shake off.

But what makes the opening titles especially brilliant is voice-over by Producer-Writer-Host Rod Serling. His sharp delivery style and ominously cryptic narration perfectly complement the theme and the opening images. When the three come together it is both deeply impressive and deeply unnerving.

The Showtime series Dexter possesses, arguably, the most inventive opening in television history. The opening theme and credits appear over a montage of the show’s main character, Dexter Morgan, as he gets ready for his day. We see him shave, eat breakfast, floss and do all of the other things that we all do to prepare for the day.

The genius of lies in the fact that Dexter is a serial killer. As a result everything that he does has a violent twist to it. Tying his shoes is a clear homage to strangulation. Putting on his shirt invokes images of suffocation. And the way he cuts into an orange (of the Blood Orange variety) will forever change the way you look at Vitamin C.

Could there ever be a list of great TV openings that doesn’t include The Simpsons? The beginning gag of Bart endlessly writing lines on a blackboard is different in almost every episode. (His lines have included “Pork is not a verb” and “A burp in a jar is not a science project). As all of the family members rush home we are introduced to the Simpson family as well as a few of the series’ countless supporting characters. It all culminates in the series’ famous couch joke, an every changing variation on the family sitting down to watch TV.

In spite of the clever animation, one of the highlights of this opening is the theme. The instantly recognizable orchestral piece came about after Matt Groening gave Danny Elfman a cassette tape of songs similar to the theme he wanted. The tape included “The Jetsons” theme, selections from Nino Rota’s Juliet Of The Spirits, a Remington electric shaver jingle by Frank Zappa, easy-listening music by Juan García Esquivel, and a teach-your-parrot-to-talk record. This clip is a mixture of a variety of intros.

This article is licensed under the GFDL because it contains quotations from Wikipedia. Further sources: IMDB, the Internet Movie Database