While I am not a sporting person, I certainly can appreciate the great moments that sports has given to history. This is but a drip in the ocean of many such moments. Remember, if you can think of others that you believe deserve a place here, or should be considered for a second list, tell us in the comments. 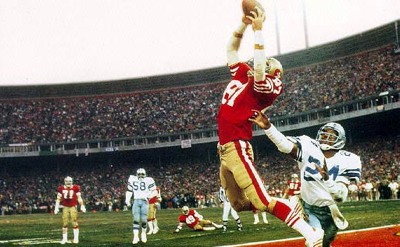 The Catch was the winning touchdown reception from Joe Montana to Dwight Clark in the January 10, 1982 NFC Championship American football game between the Dallas Cowboys and the San Francisco 49ers. The Catch is widely regarded as one of the most memorable events in NFL history. Montana threw a high pass to the back of the end zone. 49ers receiver Dwight Clark made a leaping grab with his fingertips from the back of the end zone for the winning touchdown with 51 seconds left in the game. 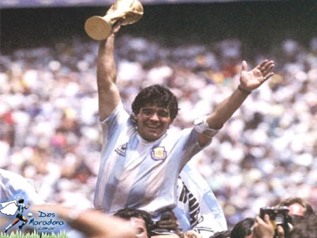 AKA The Hand of God and the Goal of the Century. The Hand of God, one of the most controversial goals, was scored as the result of an illegal (but unpenalised) handball by Diego Maradona in the quarter-final match of the 1986 FIFA World Cup between England and Argentina. Five minutes later, Maradona scored another goal, the Goal of the Century, also known as “Greatest Goal in FIFA World Cup History”, was an award given for the greatest goal ever scored in a FIFA World Cup tournament. Maradona then began his 60-metre, 10-second dash towards the English goal, leaving behind five English outfield players (Hodge, Beardsley, Reid, Butcher and Fenwick) as well as goalkeeper Peter Shilton to make the score 2–0 to Argentina. 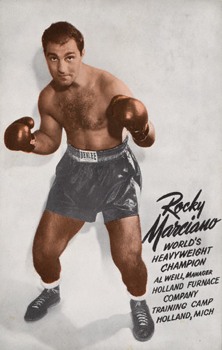 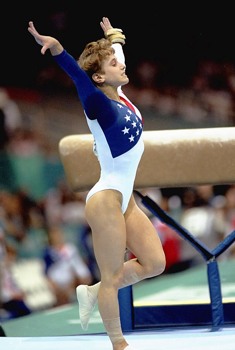 Was an gymnast for the 1996 Olympics, upon her first attempt Strug under-rotated the landing of her first attempt, causing her to fall and damage her ankle. Strug thus limped slightly to the end of the runway for her second attempt. She landed the vault briefly on both feet, almost instantly hopping onto only her good foot. Strug raised her arms after her vault, saluting the judges. She then needed assistance off the landing platform due to the injury. The completed vault received score of 9.712, which ended all doubt about whether the Americans would receive the gold. 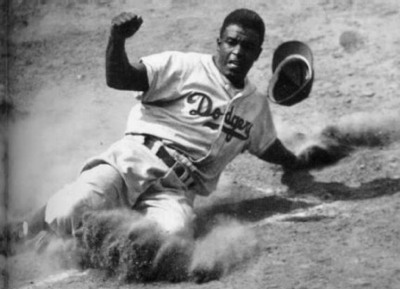 He was the first African-American major league baseball player of the modern era in 1947. his Major League debut with the Brooklyn Dodgers ended approximately eighty years of baseball segregation. In the United States at this time, many white people believed that blacks and whites should be segregated or kept apart in many aspects of life, including sports. 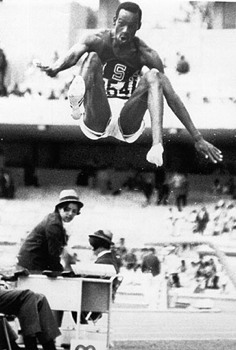 On October 18, 1968 at Summer Olympics in Mexico City, Beamon set a World record for the Long jump with a jump of 8.90 m (29 ft. 2½ in.). Destroying the last record by about 2 ft. Sports journalist Dick Schaap wrote a book about the leap, called The Perfect Jump. The record stood for 23 years until Mike Powell broke it by only 2 inches in 1991. 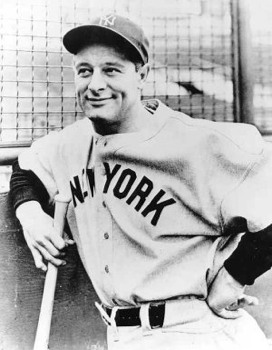 A native of New York City, he played for the New York Yankees until his career was cut short by amyotrophic lateral sclerosis (ALS), now commonly referred to in the United States as Lou Gehrig’s Disease. Over a 15-season span between 1925 and 1939, he played in 2,130 consecutive games. On July 4, 1939, a dying man stood before over 60,000 people and told them he was the “luckiest man on the face of the earth” for being able to play in ballparks for 17 years, and recieve nothing but kindness and encouragement from his fans. Lou Gehrig became a symbol of what sports, and maybe life is all about. accepting your destiny, giving it your all, and enjoying every moment, good or ill. 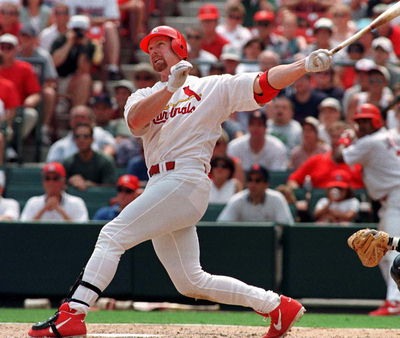 There was much media speculation as to where Maris’ HR record would be broken in 1998, and a debate as to who would break it, Ken Griffey, Jr. or McGwire. As the 1998 season progressed, it became clear that McGwire, Griffey, and Chicago Cubs outfielder Sammy Sosa were all on track to break Roger Maris’ single-season home run record. The race to break the record first became a media spectacle as the lead swung back and forth. On September 8, 1998 at 8:18 p.m. et, McGwire hit a pitch by the Chicago Cubs’ Steve Trachsel over the left field wall for his record-breaking 62nd home run, setting off huge celebrations at Busch Stadium. McGwire finished the 1998 season with 70 home runs, four ahead of Sosa’s 66. 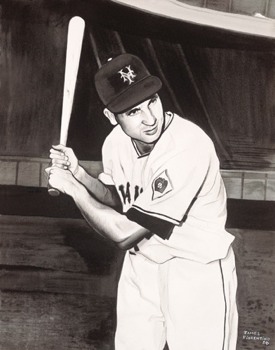 Thomson became a celebrity for hitting a game-winning home run in a playoff game, off of Brooklyn Dodgers pitcher Ralph Branca, to win the 1951 National League pennant. The home run (nicknamed the “Shot Heard ‘Round the World”) is perhaps the most famous in baseball history. The Dodgers and Giants split the first two games. This forced the decisive contest on October 3rd at the Polo Grounds. The Dodgers took a 4-1 lead into the bottom of the ninth inning, and the Giants’ cause appeared lost. But Thomson’s homer turned what looked like a certain defeat into a 5-4 victory. The moment was immortalized by the famous call of Giants play-by-play announcer Russ Hodges who cried, “The Giants win the pennant! The Giants win the pennant!” 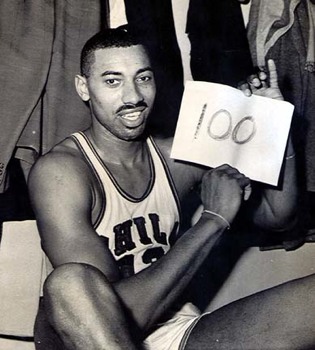 Wilt Chamberlain’s 100-point game, named by the National Basketball Association as one of its greatest games, took place between the Philadelphia Warriors and the New York Knicks on March 2, 1962 at Hersheypark Arena in Hershey, Pennsylvania. With 46 seconds left, Chamberlin had 98 pts. Chamberlain got free from the five Knicks, jumped high and stuffed the ball through the hoop for an alley-oop slam dunk to hit the century mark. The arena exploded in a frenzy. Over 200 spectators stormed the floor, wanting to touch the hero of the night. Some confusion remains about whether the game’s last 46 seconds were played. According to the NBA, play was halted and never resumed. 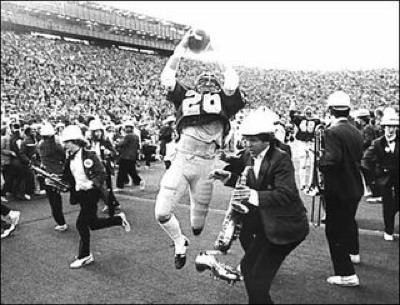 The Play refers to a last-second kickoff return during a college football game between the University of California Golden Bears and the Stanford University Cardinal on November 20, 1982. Given the circumstances and rivalry, the wild game that preceded it, the very unusual way in which The Play unfolded, and its lingering aftermath on players and fans, it is recognized as a highly memorable play in college football history and among the most memorable in American sports. 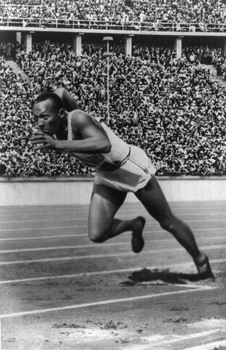 Adolf Hitler was using the games to show the world a resurgent Nazi Germany. He and other government officials had high hopes German athletes would dominate the games with victories. Meanwhile, Nazi propaganda promoted concepts of “Aryan racial superiority” and depicted ethnic Africans as inferior. Owens surprised many by winning four gold medals. one each in the 100 meters, the 200 meters, the long jump, and as part of the 4×100 meter relay team. 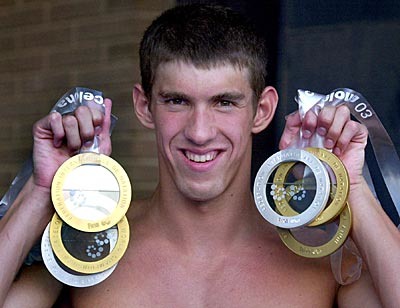 In the 2008 Summer Olympics, Michael Phelps won 8 gold medals, the record for the most medals won at a single olympics. With this record, he surpassed Mark Spitz, who had held the previous gold medal total with the seven. In the 2008 Olympics Michael Phelps set 7 new world records, only missing the 100 m Butterfly, where he beat Milorad ?avic by 0.01 seconds. 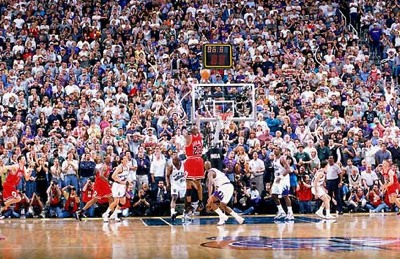 Michael Jordan is often referred to as the best player to play the game. He is a 5 time NBA MVP and 6 time NBA finals MVP. Michael Jordan played his last game with the bulls
in Game 6 of the 1998 NBA Finals at the Delta Center, the Chicago Bulls led the series 3-2, but trailed the game 86-85 with 10 seconds left. Jordan started to dribble right, then crossed over to his left. Jordan then released a shot that would be rebroadcast innumerable times in years to come. The perfect way to go out. We can all just pretend the wizards never really happened. 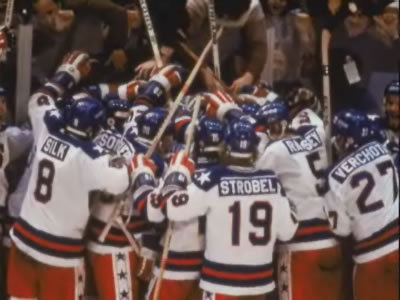 Rag tag bunch of mostly teenaged amateurs, barely together a few months and playing a sport invented and perfected elsewhere, take on the most polished, professional and unbeatable team in the history of international hockey, and win it. In exhibitions that year, Soviet club teams had gone 5–3–1 against National Hockey League teams, and a year earlier the Soviet national team had defeated the NHL All-Stars 6–0 to win the Challenge Cup. The Soviet and American teams were natural rivals due to the decades-old Cold War. In the final seconds of the game the crowd began to count down the seconds left. Sportscaster Al Michaels, who was calling the game on ABC along with former Montreal Canadians goalie Ken Dryden, picked up on the countdown in his broadcast, and delivered his famous call “…Eleven seconds, you’ve got ten seconds, the countdown going on right now! Morrow, up to Silk…five seconds left in the game…Do you believe in miracles? Yes!” US won the game 4-3. This victory was voted the greatest sports moment of the twentieth century by Sports Illustrated. 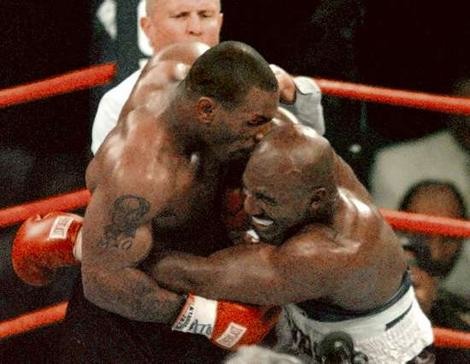 Tyson and Holyfield fought on June 28, 1997.
The most controversial event in modern sports, the fight was stopped at the end of the third round, with Tyson disqualified for biting Holyfield on both ears. The first time he bit him they stopped the match but later resumed. However after the match resumed Tyson did it again except this time he got disqualified and Holyfield won the match. One bite was severe enough to remove a piece of Holyfield’s right ear, which was found on the ring floor after the fight.