Every year thousands of people gather to take part in, or witness bizarre festivals. Many of these festivals are ancient but some are much more modern. While they are all extremely different, they have one thing in common: they are totally weird. If you wish to mention other festivals that you know of, be sure to do so in the comments. NOTE: Some images may be Not Safe For Work.

SEE ALSO:Top 10 Bizarre Festivals Of Violence From Around The World 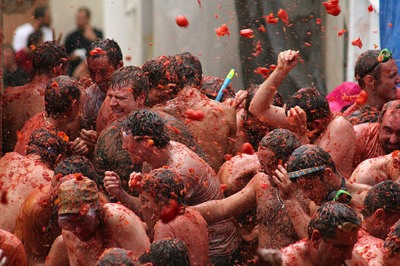 On the last Wednesday of August every year in the town of Buñol in the Valencia region of Spain, 9,000 locals and 20,000 – 40,000 foreigners descend on the town to throw tomatoes at each other in honor of the Virgin Mary and St. Louis Bertrand. This tradition has been around since the 1940s, though it was briefly suppressed under the reign of Franco. The festival starts with a person attempting to scale a greased pole to capture a cooked ham. Once the ham is taken down from the pole, water canons are fired at the participants and over 100 tons of tomatoes are dumped into the streets for throwing. Women are expected to wear white and men to wear no shirts. Anyone caught wearing a shirt inevitably has it ripped off – including women and especially tourists who tend to be the main target of locals. 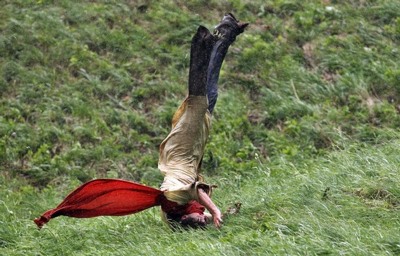 The Cheese Rolling Festival is held every May in Cooper’s Hill, Gloucestershire in the United Kingdom. The festival involves an official tossing a cheese down the extremely steep hill, after which hundreds of people begin to run down the hill (risking life and limb) in order to catch the cheese. Each year the event results in casualties and for this reason children are not allowed to participate, though oftentimes boys from the local town will join in anyway. For the children, there is an uphill race. Women and men race separately in the main event. 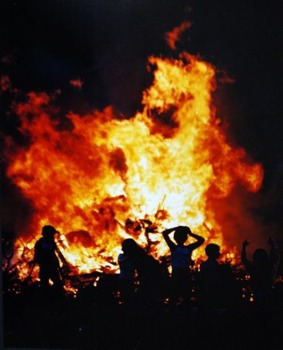 The Bonfires of Saint John is a popular festival in Spain held on the 19th to the 24th of June. The strange festival involves the lighting of bonfires (frequently fueled by old furniture). The locals share hot chocolate whilst watching the bonfires. But then it gets weird. The children of the villages then take turns in running through the fires. The entire week is filled with festivities including fireworks displays and eighty-six women and eighty-six young girls are elected the “Beauties” of the bonfires. These “beauties” preside over the festival as Queens. 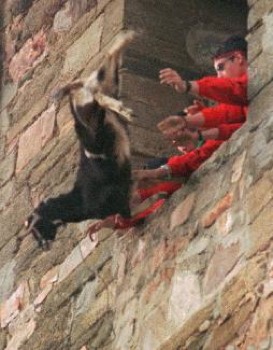 The Spanish certainly like their odd festivals. Every year on the fourth Sunday in January, the locals of a small town named Manganeses de la Polvorosa gather together for the goat tossing festival, in honor of St Vincent de Paul, their patron saint. The festival has been around for so long that no one knows when it started. It involves a young man who finds a goat in the village, ties it up, and takes it to the top of the local Church belfry. He then tosses the goat over the side and it falls 50 feet where it is (hopefully) caught by villagers holding up a sheet of tarpaulin. The village officials banned the event but it continues regardless. Various animal rights agencies have complained about it – though their complaints have also been ignored. 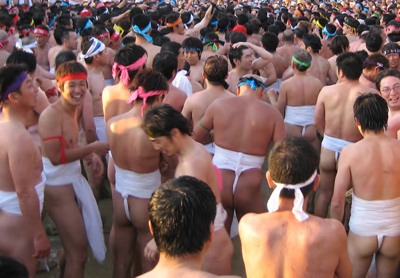 Hadaka Matsuri is a Japanese festival in which the participants are all but naked. The festival is celebrated many times throughout the year in various parts of Japan and those involved usually wear a type of traditional loin cloth. Some of those involved go completely naked which is not frowned on at all – in fact it is considered healthy. The festivals often involve the use of mud (for entertainment) and there are often separate women’s and men’s festivals. In some towns special festivals are held for children – as a rite of passage, but sometimes children participate in the adult festival. The festival has its origins as a religious event, but these days the religious aspects are virtually forgotten. 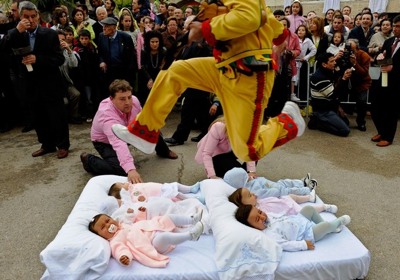 Dating from 1620, El Colacho (or baby jumping) is a festival in Spain held every year on the feast of Corpus Christi. The festival involves the laying on mattresses all babies born in the previous twelve months. The adult men of the village of Castrillo de Murcia then dress up as devils and take turns jumping over the babies. The festival often results in injuries (usually of the adults) and it is believed that the jumping rids the babies of original sin – a bizarre kind of baptism. Pope Benedict XVI has recently asked the local priests to distance themselves from the festival as it is dangerous and contrary to the Catholic religion. 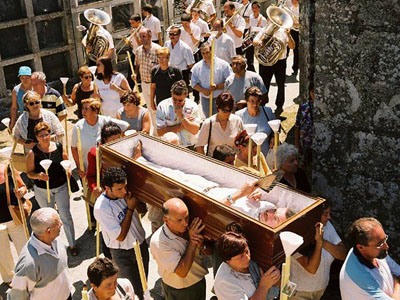 Every year in Las Nieves, Spain, people who have suffered a near death experience in the previous year get together to attend Mass in celebration of Saint Marta de Ribarteme, the Patron Saint of resurrection. But here is the twist: they turn up at Mass carrying a coffin, or being carried in a coffin. After Mass, the coffins all proceed to the top of a nearby hill with a statue of the saint. Despite the somberness of the event, people light fireworks and shopkeepers fill the streets to sell religious objects. 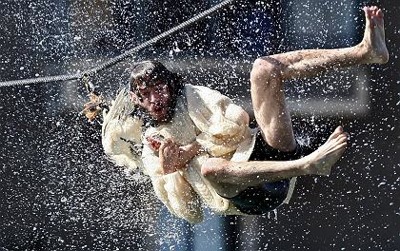 Until recently, an annual festival was held in Germany in which a goose was tied by its feet to a post and then clubbed by the local men until its head came off. As a result of complaints from animal rights activists, the festival-goers now hit a goose which has previously been killed. A very similar event occurs in Spain (surprise surprise) every year in which a man hangs from the goose until the head comes off. Again the goose is killed prior to the event which dates back 350 years. The Spanish festival is called Antzar Eguna. 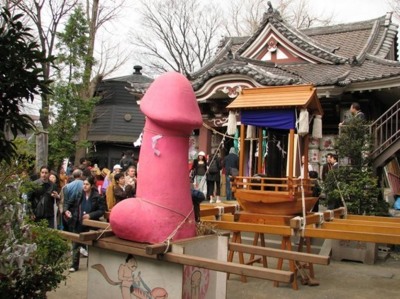 Every year in spring, the festival of Kanamara Matsuri (The Steel Phallus) is held in Kawasaki, Japan. It is a Shinto fertility festival and, as you would expect, it involves a rather large penis statue. During the festival, people can buy candies, vegetables, and gifts in the shape of a phallus. The festival was very popular amongst prostitutes who thought that participation would help to prevent them getting sexually transmitted diseases. 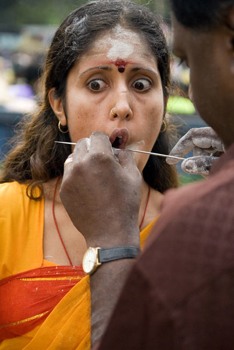 Thaipusam is a Hindu festival (celebrated mostly by Tamils) held in January/February each year to celebrate the birth of Murugan (the son of gods Shiva and Parvati). The participants shave their heads and perform a pilgrimage, at the end of which they shove very sharp skewers through their tongues or cheeks. Some of the practitioners put hooks into their back and pull heavy objects like tractors. The aim is to cause as much pain as possible – the more you endure, the more “blessings” you receive from the gods. The festival is popular in India, but the largest celebrations take place in Singapore and Malaysia, where it is a public holiday.

10 Outlandish Conspiracy Theories About The Nazis