We all love a good festival. Community gatherings to celebrate everything from the coming of spring to a good harvest or religious milestones have occurred around the world since man first learned how to party. Many of these events are time-honored traditions, steeped in history and local custom. Modern festivals celebrating food, music, and culture are happening every week somewhere around the world.

However, there are also some truly bizarre festivals that make the barn dance in the hay shed look positively boring. Some are based on traditional ceremonies, others have commercial origins, and a handful are held in support of a good cause. From jumping over babies to mud fights and a parade of all things phallic, here are some of the most unusual festivals from around the world. 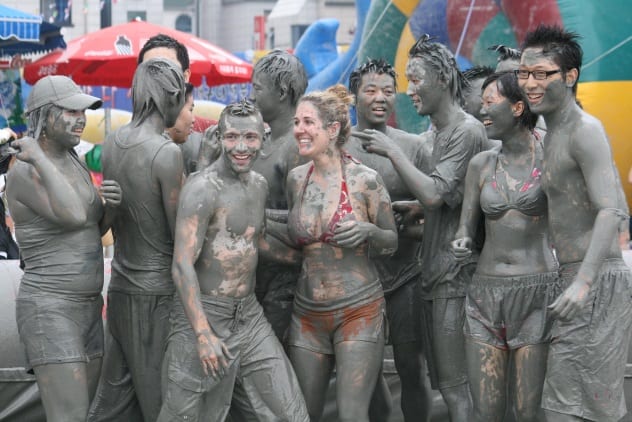 Tourists and locals alike are happy as pigs in mud during July in the town of Boreyong in South Korea. For two weeks, the Boryeong Mud Festival draws millions of visitors from around the globe. Here, you can wallow in mud along the coastline and enjoy the cosmetic benefits of the mud’s mineral qualities.

The festival began in the late 1990s to promote the region’s mud-based cosmetic products but has developed into a major tourist event. Truckloads of mud are laid out on Daecheon Beach, where festivalgoers enjoy mud wrestling, mud skiing, mud slides, and even body painting with specially colored mud. You can also enjoy a rejuvenating mud massage.[1] 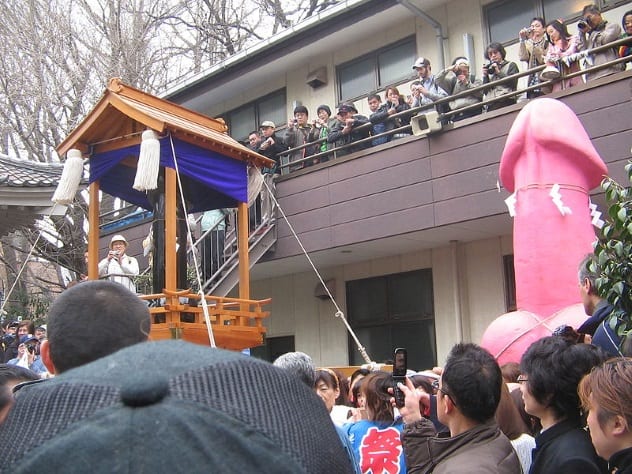 You wouldn’t imagine finding a penis-themed festival anywhere in the world, let alone in Japan, a culture often associated with modesty. The Kanamara Matsuri festival in honor of all things phallic arose from a local phallic shrine. According to legend, a large iron phallus was constructed to thwart a penis-eating demon and enshrined outside the village. Prostitutes would come to the Kanayama Shrine to pray for protection from certain occupational hazards, namely STDs.

In modern times, the focus has shifted to fertility for young married women, and the festival also raises funds for research into HIV. Each April, three large phallic shrines are paraded through the streets for an hour-long parade. At the end of the parade, festivalgoers can feast on local foods as well as phallic-shaped lollipops and carved fruit or even try their hand at a spot of penis-carving with fruit.[2]

Not surprisingly, a large number of novelty souvenir items are also on sale.


8 Night Of The Radishes
Mexico 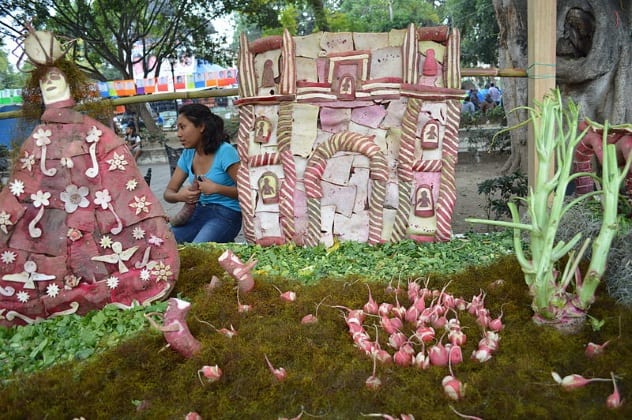 Fancy refining your pumpkin carving skills to something a little smaller? Carved radishes are the feature of a Christmas festival in the Mexican city of Oaxaca.

Noche de Los Rabanos (Night of the Radishes) began during the 19th century, when market stall holders aimed to attract Christmas churchgoers to sample their wares in the village square with intricately carved radishes to decorate the Christmas table. December 23 was officially proclaimed the Night of the Radishes in 1897.

Tourists and locals alike flock to admire carvings themed on everything from traditional nativity scenes to historic local culture. Radishes for the event were initially sourced from local farmers. However, the popularity of the contest has grown to the point where a dedicated radish plantation has been established outside the city to provide contestants with material for their artistic sculptures.

A large cash prize is up for grabs today for the best carved radish display.[3] 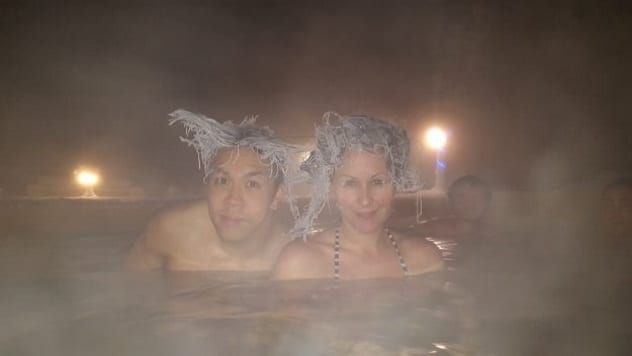 Winter in the North is so cold that you wouldn’t imagine setting foot outside without headwear in case your hair freezes. Yet in Canada, there is an entire festival dedicated to creating the most bizarre frozen hair sculptures. In February each year, the town of Whitehorse, Yukon, holds the annual International Hair Freezing Competition.[4]

With temperatures at around minus 20, festivalgoers converge on the Takhini Hot Pools to create their icy coiffures. Simply soak your head in the water, and when you lift it out, the freezing air outside will complete the sculpture for you. The winners are announced in March.

Being hit by a flying cow pie is said to bring the utmost good luck in an Indian village in the Pradesh region. Each April, villagers of Kairuppala hurl cow dung at each other at the end of their Ugadi festival.[5] The bizarre street fight is said to bring health, prosperity, and rain to anyone fortunate enough to be hit by the smelly missiles.

Thousands gather to watch the reenactment of a mythical marriage dispute between the goddess Bhadrakali and Lord Veerabhadra Swarmy before eventually celebrating the nuptials. If you happen to be injured by a piece of flying cow dung, never fear: It is said to contain special healing qualities. 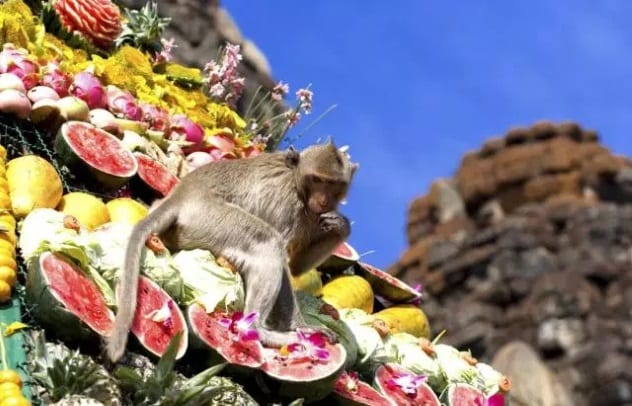 Visit most animal sanctuaries around the world, and you will be asked not to feed the animals. However, in Thailand, there is an entire festival dedicated to feeding the monkeys. On the last Sunday of November each year, the residents of Lopburi, one of the oldest cities in Thailand, prepare a massive banquet specifically for their resident monkeys.

Long-tailed macaques inhabit the ancient Khmer ruins and also freely roam the streets of Lopburi, gnawing on everything from food scraps to electricity cables. However, the monkeys are considered to be descended from the Monkey King and to bring good luck, so the locals are unwilling to engage in any sort of pest control. Instead, they hold a banquet in their honor, and local residents decorate their homes with fruit sculptures to attract good fortune and prosperity from the long-tailed inhabitants.

The festival is held at the ruins, where huge banquet tables of fruit, salads, and sticky rice are set out for the monkeys to share with festivalgoers. Just don’t be surprised to find a monkey perched on your head to share your food.[6] 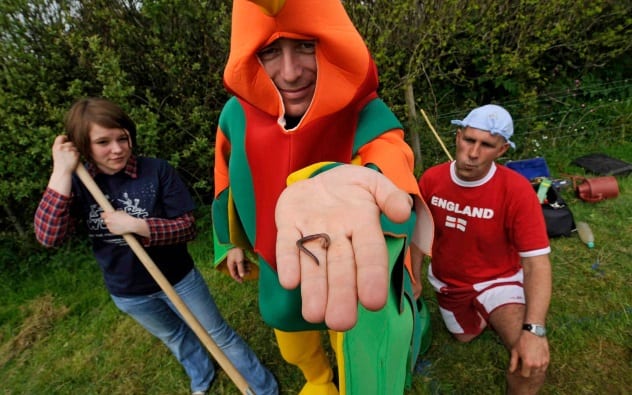 Catching worms might not be everyone’s idea of a fun way to spend a day, unless you are a keen fisherman looking for some fresh bait. Nevertheless, hundreds of people flock to a small town in Devon for an annual worm charming festival. The event is held each May in Blackawton.

Teams of three are allotted a small field, from which the aim is to collect the most worms in 15 minutes. Contestants can use any means to entice their worms to the surface, including tapping like a bird, using a fork, or pouring liquid on the surface. This was apparently how the idea of the worm farming festival was conceived. A couple of pub patrons relieved themselves in the sand on the way home and were amazed to see worms wriggling to the surface.

The competition itself is over in a very short time, but there are numerous other activities throughout the day to entertain festivalgoers.[7] 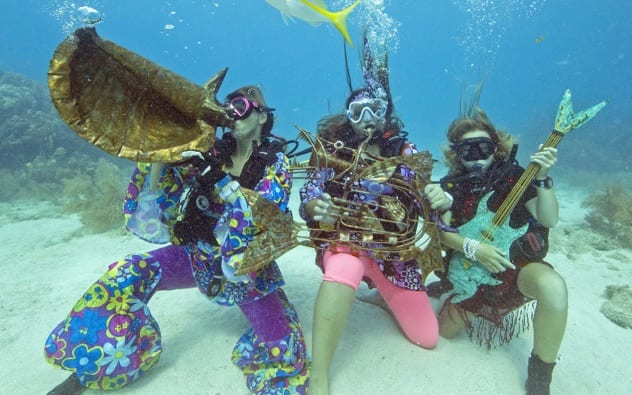 Singing in the shower is a popular pastime, but an entire music festival held underwater can be found off the Florida Keys. The event was established in the 1980s to raise awareness for preserving the Keys’ coral reefs.

Divers and snorkelers hit the water each July to watch musicians dressed as fish and mermaids “play” on mock nautical-themed instruments, such as the “fluke-a-lele” and “trom-bonefish.” Those in the water enjoy ocean-themed music streamed from the local radio station via underwater speakers. “Landlubbers” can still enjoy a range of festival activities on the shore.[8]

There’s nothing like a good water fight to cool off on a hot summer day. A festival in the Sinchon district of Seoul, South Korea, has taken the fun to a whole new level. The festival originated as a bit of midsummer fun for the local college students to beat the heat and has developed into one of the most popular summer festivals in Seoul.

Festivalgoers, sometimes in fancy dress, battle it out amid the music and market stalls with water guns of all shapes and sizes. If you happen to wander into the water battle zone unarmed, you can purchase a weapon on-site and join in the fun.[9] Included in the events on the day is a “water gun wedding,” a whole new take on the Western “shotgun” wedding.

There are some unusual baptism traditions around the world, but the baby jumping festival in Castrillo de Murcia, Spain, may be the most bizarre in the Western world. Since the 1600s, local villagers have brought their babies to be blessed during the Feast of Corpus Christi in June each year.

During the El Salto del Colacho (Devil’s Jump), men dressed as the Devil, wearing red and yellow suits, jump over babies laid on mattresses in the streets. The “Devil” cracks a whip and clacks castanets as he jumps to ward off evil spirits, before the babies are sprinkled with rose petals. Though it was originally only a local custom, people from around the region now bring their babies to be blessed in the somewhat bizarre ritual.[10]