[WARNING: contains text and images about spiders] In light of all the anti-spider comments on listverse recently, I started thinking of a few facts of the order Araneae, and then, of course, a list about them. For the Spider-phobes among my fellow readers, it may be better that you head over to Disney.com. (or chose another list from archives here ;) Cyn)

First a few basics: the Class that spiders belong to is Arachnida, which also includes scorpions, ticks and mites. So from a taxonomy / linguistic point of view at least, an arachnophobic would include the panic and fear of these creatures as well. It’s just as well not to think about this too much, as mites (mostly microscopic) live just about everywhere – including in just about all upholstery and plush toys. Of spiders (order Araneae), there are about 110 families and about 40,000 species. Keep in mind that this classification, probably, is not complete and there may be more families and species yet to be found. I am calling this list “Talking Points’ because these entries are somewhere between fact and opinion. I am counting up, as these are in no particular order. 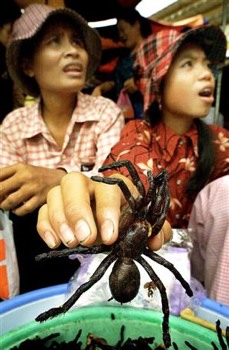 Tarantula spiders are a delicacy in several parts of the world. They are eaten by the indigenous Piaroa tribes of Venezuela, as well as in Cambodia. Remember though, the hairs of the tarantula are an irritant and must be removed first (for those wanting to try the recipe). A news article I read quoted a Cambodian local, “They taste a bit like crickets, only much better”. I have not tried them and cannot verify this claim. If you have tried them, please mention in the comments how they taste. 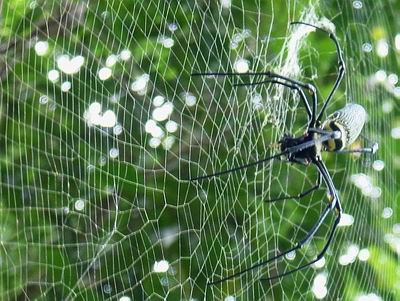 Well, not the spiders themselves, of course. However in a relatively new development, certain spider venom is being investigated as an eco-friendly insecticide. In synthetic or natural form it can, potentially, target crop destroying insects with little or no effect on non-target species (e.g. birds, humans, other mammals, etc.) An additional benefit is that many scientists believe that the target insects may not become naturally resistant. 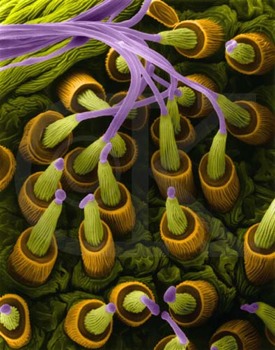 Spider silk is amazing and humanity can benefit from studying, and perhaps synthesizing, its properties. Pound-for-pound this protein fiber (or silk) is stronger than steel. It is reputed to be as strong as the Aramide filaments (E.g. Kevlar). It is also extremely ductile and can flex and stretch up to 30% (or in some cases 50%) of its length. As a fiber for protective clothing it may prove invaluable. Spider silk is also very light weight. 40,000 Kilometers (25,000 miles) – the circumference of Earth – of a single fiber would weigh about 450 grams (about 16 ounces). [Image Source] 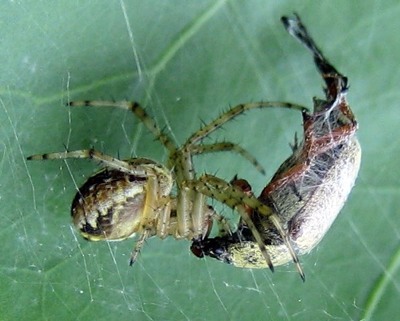 Spiders love to eat insects. In fact, in absolute terms, spiders eat more insects than birds and are better at pest control (they chow down on the little insects that are too small for birds and young insects that haven’t bred yet). In spite of having 8 eyes (though some have different amounts) they do not see very well and will rarely attack without provocation. Jumping spiders, one the other hand, have a better visual acuity than almost anything else its size. Human eyes are only about 5 times better than a jumping spider. On the plus side (for people) is that though they can jump 20-60 times their body length, they prefer to jump at their insect prey. 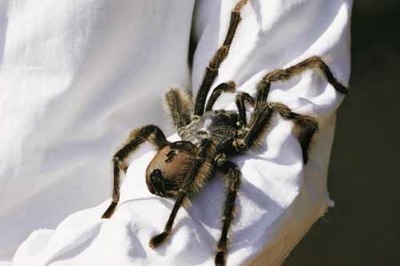 Most spiders are skittish creatures, and really do not like to bother people. If a spider is on you, it probably just wants off you as much as you want it off. A flick is probably better than a squash. 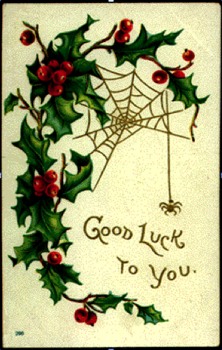 Spiders are, naturally, good luck symbols for weavers and spinners, and by extension, those in the fabric and garment industry. The word ‘spider’ is derived from “spin”. According to some sources spiders also bring good luck in money matters. My research indicates that as a spider attracts and traps prey, so a spider amulet should attract and hold wealth. In the tradition of the Pueblo Indians (South western North America), the creation goddess was called Spider Woman. Also known as Creation Thinker Woman she spins life and all creation out of her thoughts as a spider spins from her body substance. She is a powerful and loved goddess. 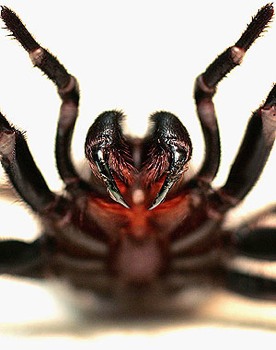 Of all the approximately 40,000 species of spiders, only one (so far) has been found to be a non-predator. All the others are hunters. Less than 50 are known to have venom harmful to humans. There are two main classifications of spider venom: necrotic that attacks the soft tissue around the bite and neurotoxic that attacks the nervous system of the victim. For the spider bite to be harmful or fatal to humans several factors must all be taken into account: (a) the size of the fangs (properly, the Chelicerae) – they must be large enough to break the skin, (b) the venom compound – it must be toxic to human physiology and (c) the quantity of venom used. Because a spider can control the amount of venom used, and (because they do not see us as ‘food’) almost all bites are defensive, most spider bites are dry or contain a reduced amount of toxin. The aggressive Brazilian Wandering Spider is a notable exception.

8
Some Spiders are Social
huge Spider Web Spun in Texas

Almost all spiders are solitary hunters. However a few species are social and form colonies. And whereas most of these colonies are only between 500 and 1000 individuals, an Anelosimus eximius colony can be the home of more than 20,000 spiders. It is a good thing that these are scarce (the forests of north-western South America). A single nest was reported to be over 25 feet in length, 6-8 feet wide and 4-5 feet high – perhaps the home to 50,000 spiders. [Video – A news report of a social spider colony in Texas, USA.] 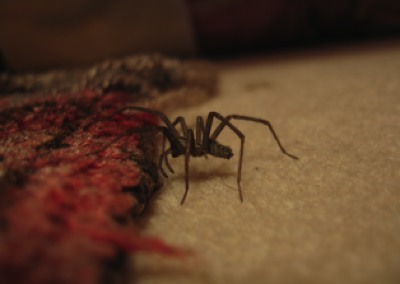 Well, that’s not entirely true. The truth is: they like our environment. Unlike many other poisonous creatures that live on this planet, spiders can live very well in the same habitat as humans. In the world there are various poisonous snakes, two species of poisonous lizards (Gila monster and beaded lizard), two species of poisonous birds (Hooded Pitohui and Ifrita), and many species of amphibians, fish and jellyfish – and, for the most part, few of them tend to come into our homes, walk on our ceilings or sleep in our beds. In the USA, the Black Widow and the Brown Recluse can be found in homes. In Australia, the Redback can be found just about everywhere, and especially loves dense urban areas. The Sydney Funnel-web spider (see picture) can be particularly nasty. They like water and often fall into swimming pools. They survive in the water for quite a bit, and will bite when fished out. They are not known for their gratitude. There is an anti-venom, thankfully, so there have been no reported deaths since 1980. 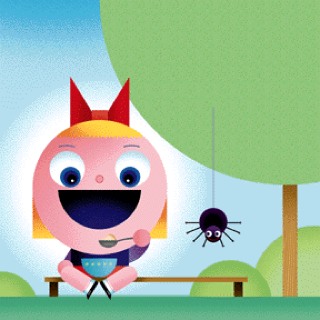 Arachnophobia is officially known as: DSM-IV –TR: 300.29 Specific Phobia (subtype animal, specifically spider), at least in the United States. The Diagnostic and Statistical Manual of Mental Disorders, fourth Edition (Copyright 2000 American Psychiatric Association) is, I think, the authoritative source of these things. This list, by the way, is not intended to be diagnostic or to provide medical advice.

A. Marked and persistent fear that is excessive or unreasonable, cued by the presence or anticipation of a specific object or situation.
B. Exposure to the phobic stimulus almost invariably provokes an immediate anxiety response.
C. The person recognizes that the fear is excessive or unreasonable
D. The phobic situation(s) is avoided or else is endured with intense anxiety or distress.
E. The avoidance, anxious anticipation, or distress in the feared situation(s) interferes significantly with the person’s normal routine
F. In individuals under age 18 years, the duration is at least 6 months.
G. The anxiety, Panic Attacks, or phobic avoidance associated with the specific object or situation not better accounted for by another mental disorder…