[WARNING: Some content may disturb] We have previously posted a list of the top 10 most disgusting foods and this is our long awaited sequel. We certainly can’t deny that in the West we eat some pretty awful stuff (such as sea urchin and tripe), and this list includes a couple of our own “delights”. For that reason it is probably more balanced than the previous list which focused less on western foods. The thing that most frightens me is that this list is how easy it was to find another ten utterly revolting things that people eat. 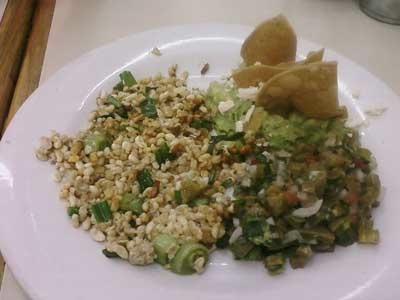 Escamoles are the larvae of ants of the genus Liometopum, harvested from the roots of the agave (tequila) or maguey (mezcal) plant in Mexico. In some forms of Mexican cuisine, escamoles are considered a delicacy and are sometimes referred to as “insect caviar”. They have a cottage cheese like consistency and taste buttery, yet slightly nutty. To procure the escamoles, men must dig as far as 2 feet down to reach a nest of larvae. One larvae collector said: “Some of the hunters have a man with a broom who sweeps the ants off their bodies while they’re digging. I have heard that others spread their bodies with pork fat so the ants can’t bite.” It should be noted that the ant’s bite is extremely painful – so gathering the eggs is something of an “extreme” job. 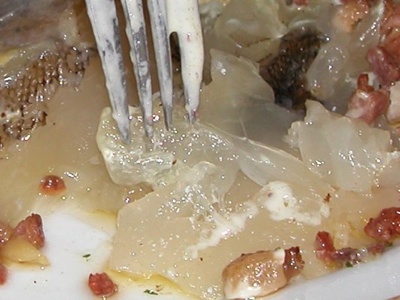 Lutefisk is a traditional dish of the Nordic countries made from stockfish (air-dried whitefish) or dried/salted whitefish (klippfisk) and soda lye (lut). Its name literally means “lye fish”, because it is made using caustic lye soda derived from potash minerals. Because of the lye content, overcooking can cause the fish to turn to soap. When cooking and eating lutefisk, it is important to clean the lutefisk and its residue off pans, plates, and utensils immediately. Lutefisk left overnight becomes nearly impossible to remove (imagine what this is doing to your insides). Lutefisk is usually served with a variety of side dishes, including, but not limited to, bacon, green peas, green pea stew, potatoes, lefse, gravy, mashed rutabaga, white sauce, melted or clarified butter, syrup, geitost (goat cheese), or “old” cheese (gammelost). The scandanavians are so good at making nasty smelling or tasting food that they get two items on this list: 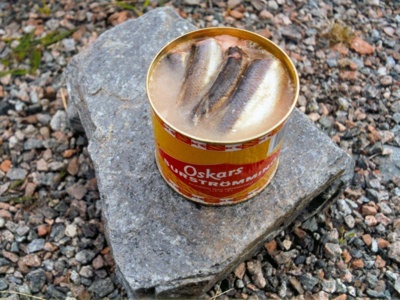 Surströmming is fermented tinned fish which is so foul that it is mostly eaten outdoors due to the stench. It is sold in cans, which often bulge during shipping and storage, due to the continued fermentation. Species of Haloanaerobium bacteria are responsible for the in-can ripening. These bacteria produce carbon dioxide and a number of compounds that account for the unique odor: pungent (propionic acid), rotten-egg (hydrogen sulfide), rancid-butter (butyric acid), and vinegary (acetic acid). Usually an open sandwich is made with surströmming and a number of other ingredients. Boiled potatoes (often mandelpotatis or almond potatoes) are common, as are diced onion. Other common ingredients are gräddfil (fat fermented milk/sour cream) or crème fraîche, chives and sometimes tomato. Many people do not care for surströmming (surprise surprise), and it is generally considered to be an acquired taste. 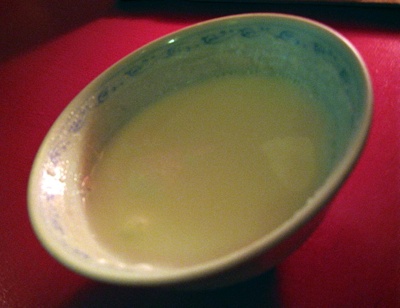 This is actually a drink, but it is sufficiently disgusting (and nutritional enough) to be included here. Kumis is a dairy product made from the fermented milk of a female horse. Because mare’s milk contains more sugars than the fermented cow’s or goat’s milk, kumis has a higher, though still mild, alcohol content. Kumis is made by fermenting mare’s milk over the course of hours or days, often while stirring or churning. (The physical agitation has similarities to making butter). During the fermentation, Lactobacilli bacteria acidify the milk, and yeasts turn it into a carbonated and mildly alcoholic drink – basically fizzy mouldy horse milk. One other property of this revolting drink is that it has a laxative effect. In other words, it makes you poo. 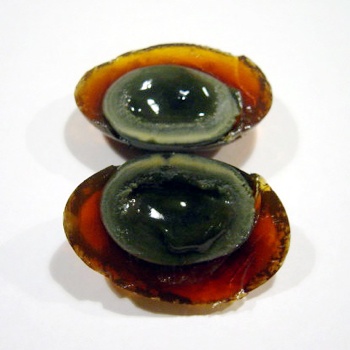 How I missed this on the first list I do not know, but here it is (at last) to haunt your dreams. Century egg is a Chinese cuisine ingredient made by preserving duck, chicken or quail eggs in a mixture of clay, ash, salt, lime, and rice straw for several weeks to several months, depending on the method of processing. After the process is completed, the yolk becomes a dark green, cream-like substance with a strong odor of sulphur and ammonia (AKA farts or rotten egg), while the white becomes a dark brown, transparent jelly with little flavor or taste. Century eggs can be eaten without further preparation, on their own as a side dish or chopped and used as an ingredient. But whichever way you look at it – you are still eating rotten egg. 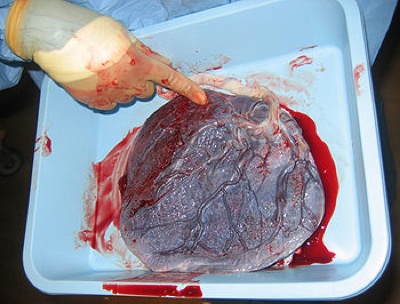 I was in two minds about adding this item, but it is definitely eaten by enough people that it has its own name: placentophagy so here it is. Those who advocate placentophagy in humans, mostly in modern America and Europe, Mexico, Hawaii, China, and the Pacific Islands, believe that eating the placenta prevents postpartum depression and other pregnancy complications. A variety of recipes are known to exist for preparing placenta for eating in spite of the extended taboo against eating human body parts. Because a placenta is a temporary organ, it is considered by some to be excluded from the classification needed for cannibalism. Here is just one recipe I found on the Internet for placenta – it is a placenta cocktail: 1/4 cup raw placenta, 8oz V-8 juice, 2 ice cubes, 1/2 cup carrot. Blend at high speed for 10 seconds and drink. Or not. 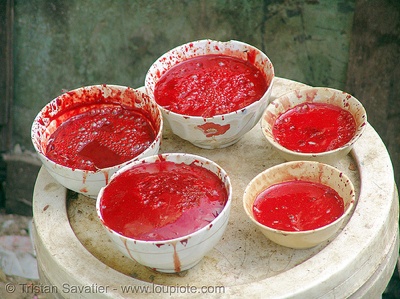 Raw blood soup (ti?t canh in Vietnamese) is a dish made with raw blood of ducks or geese (sometimes pigs), with peanuts and herbs on top. This is the typical protein-rich breakfast of the country people in Northern Vietnam, but is very dangerous because of the H5N1 bird flu virus. This is made by taking fresh blood and sticking it in the fridge to gently congeal. Raw blood soup is a Vietnamese dish which is usually consumed while drinking alcohol and it is one that makes very little effort appeal to the taste buds of the non-Vietnamese diner. Usually you will find a few chopped peanuts scattered on top of your blood but that’s as far as it goes for fanciness. Blood soup has the oddest texture and tastes strangely metallic. [Image source] 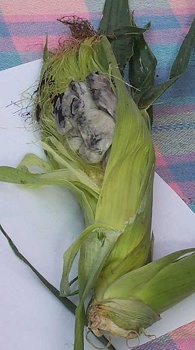 What a name! And if that isn’t bad enough, wait until you hear what this stuff is: corn smut is a disease of maize which can infect any part of the plant it usually enters the ovaries and replaces the normal kernels of the cobs with large distorted tumors analogous to mushrooms. In the United States it is (rightly) considered a pest. In Mexico… it is a delicacy. In Mexico corn smut is called huitlacoche, a Nahuatl word reportedly meaning raven’s poo. It is considered a delicacy, even being preserved and sold for a higher price than corn. For culinary use, the galls are harvested while still immature — fully mature galls are dry and almost entirely spore-filled. The immature galls, gathered two to three weeks after an ear of corn is infected, still retain moisture and, when cooked, have a flavor described as mushroom-like, sweet, savory, woody, and earthy. This “delicacy” has had difficulty entering American and European diets – for obvious reasons! 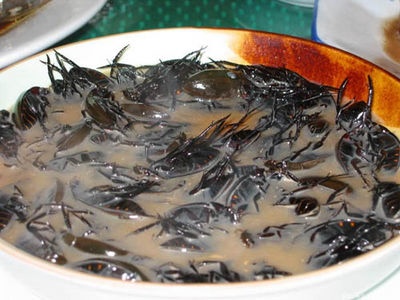 Scorpion soup – as its name implies, is a soup made from scorpions. Preparing and eating scorpion soup can be a dangerous task as Wing Li from China recently discovered when he was stung by three as he tried to throw them in the pot. He was making the soup to help ease his rheumatism. Scorpions are eaten in the south of China. They are reared in ‘ranches’, mostly in people’s homes, then sold in the markets. Scorpions have a woody taste and should be eaten whole, except for the tip of the tail – though some recipes suggest that the venom in the tail is rendered harmless by cooking. Either way – I think I will stick to chicken soup thanks. 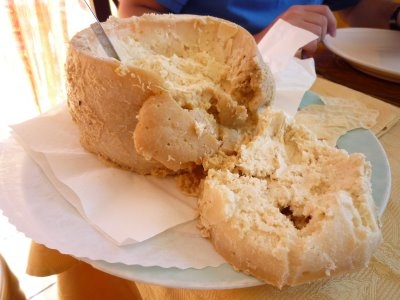 This cheese is so disgusting it is illegal – but that doesn’t stop the blackmarket from selling tons of the stuff to locals. Casu Marzu is a traditional Sardinian sheep milk cheese, notable for being riddled with live insect larvae. Derived from Pecorino, Casu marzu goes beyond typical fermentation to a stage most would consider decomposition, brought about by the digestive action of the larvae of the cheese fly Piophila casei. These larvae are deliberately introduced to the cheese, promoting an advanced level of fermentation and breaking down of the cheese’s fats. The texture of the cheese becomes very soft, with some liquid seeping out. Casu marzu is considered toxic when the maggots in the cheese have died. Because of this, only cheese in which the maggots are still alive is eaten. Because the larvae in the cheese can launch themselves for distances up to 15 centimeters (6 in) when disturbed, diners hold their hands above the sandwich to prevent the maggots from leaping into their eyes. If a diner is not careful to chew the maggots until they are dead, dire consequences can arise: the larvae (which are resistant to stomach acids) have powerful mouthhooks which can lacerate stomach linings or intestinal walls as the maggots attempt to bore through internal organs. 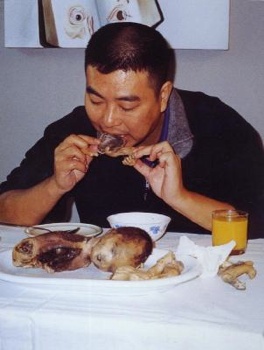 This is listed as a bonus because it is disputed and even if true, is not common or accepted anywhere in the world. We have all heard the xenophobic tales of Chinese people eating fetuses. This is almost certainly untrue. However, a series of photos were released onto the internet which showed a Chinese man eating a human fetus. It turned out that he was an artist and the photographic series was one of his works of art – entitled “Eating People” (another recent work was a can of human brains). When questioned, the artist (Zhu Yu) claimed that the fetuses were real human fetuses stolen from a medical school. Snopes believes the fetus is a doll’s head attached to a duck’s body. Whether they are real or not, the photograph above is somewhat disturbing!