Believe it or not, some of the popular fruits, nuts, and vegetables we eat today are man-made hybrids. They were created in laboratories through selective breeding, a process whereby only plants with favorable traits are replanted. That said, there have been rare instances where insects were responsible for creating the hybrid plants through cross-pollination.

Of course, these insects would never have been able to cross-pollinate the plants if humans hadn’t planted at least one of them in the area. Most of the entries on this list are surprising because the majority are fruits, nuts, and vegetables that we consider to be natural. 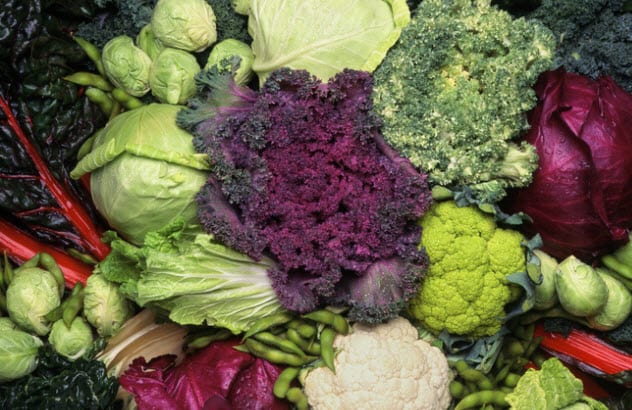 About 2,500 years ago, wild mustard only grew in some parts of Europe and the Mediterranean; its taste varied greatly depending on where it grew. Ancient Romans and Greeks soon realized that they could plant it for food so they engaged in selective breeding by planting seeds from wild mustard with larger leaves. The result was the vegetables that we now call kale and collard greens.

Selective breeding continued in the 1600s when people bred wild mustard with bigger leaf buds. The result was a new vegetable covered with lots of leaves—this was the first cabbage. Wild mustard selected for its bigger stems became kohlrabi, the ones with small heads became brussels sprouts, and the ones with big flowers became broccoli and cauliflower.[1]

The hybridization of wild mustard and its derivatives continued up to the 20th century. In 1928, Russian biologist Georgii Dmintrievich Karpechenko crossed a radish with a cabbage to produce what he called the rabbage. The rabbage should have been impossible because the radish is not related to the cabbage. However, the plant never caught on because it failed at being either a radish or a cabbage.

Later in 1993, the Sakata Seed Company of Yokohama, Japan crossbred broccoli with kai-lan to create broccolini, or as some call it, baby broccoli, asparation, asparations, broccoletti, broccolette, and Italian sprouting broccoli. It’s a derivative of wild mustard and is the Chinese version of broccoli. 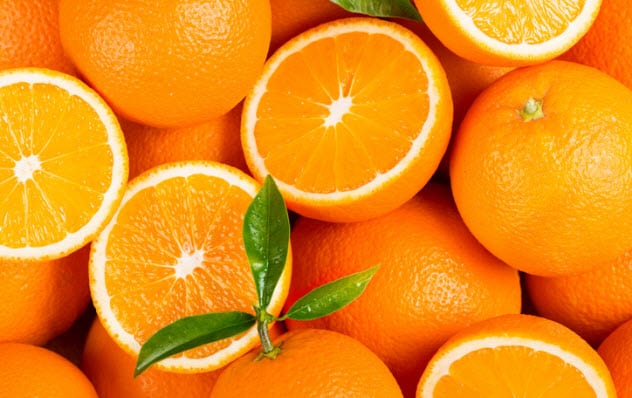 The history of the orange is unclear, but it is believed to have first appeared in southern China. Over the years, humans have selectively bred oranges to create many varieties, making it easy to confuse the orange with other citrus fruits. To be clear, a fruit needs to have evolved from the pomelo and mandarin to be considered an orange.

What is a Pomelo? 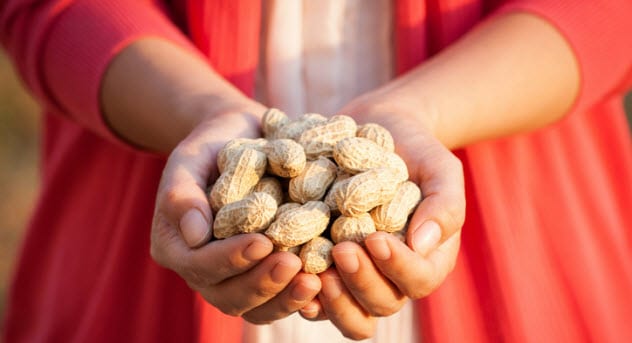 Both plants were found so far away from each other, they couldn’t have crossbred naturally. Researchers ultimately discovered that the earliest settlers in South America took the Arachis duranensis from the Andean valleys as they migrated into today’s Bolivia 10,000 years ago.

However, the settlers did not quickly realize the potential of their new crop and it was the bees that actually cross-pollinated both peanuts. The result was a new peanut that is the ancestor of today’s peanuts.[3] 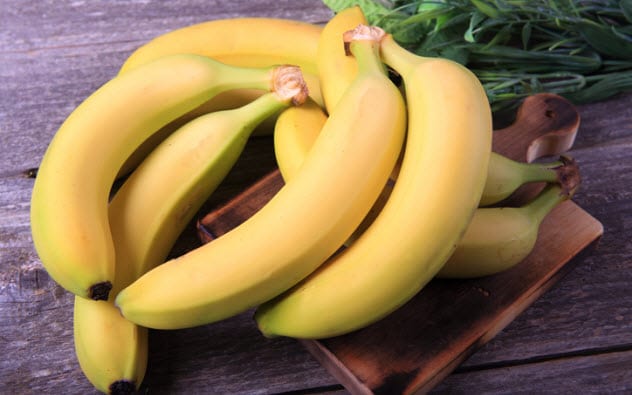 Both bananas naturally crossbred in the forests of South Asia. However, the resultant banana, which is the ancestor of the modern banana, was sterile. About 10,000 years ago, early humans discovered the hybrid and learned that they could replant the shoots to create new trees. They engaged in selective breeding and only replanted bananas with favorable traits. This led to the creation of the modern banana.

Although we’ve managed to create the perfect banana, we could not figure out a way to grow bananas from seeds. So, bananas will become extinct if we stop planting them. The absence of a seed also means that all bananas have the same genetic properties as they are replanted from the shoot of another tree. As a result, all the world’s banana trees could be wiped out by a single disease.[4] 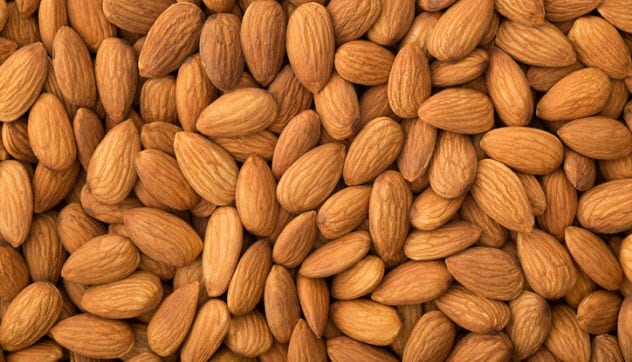 Scientists have their theories though. They suspect that the wild ancestor of the almond is the Amygdalus fenzliana (Fritsch) Lipsky because its trees, seeds, and fruits resemble the modern almond. It’s also found in Armenia and Azerbaijan, where today’s almond is believed to have been selectively bred by humans. Besides the origin, scientists cannot determine how our ancestors managed to create a perfect, sweet almond because the almond is poisonous.

SEE ALSO: 10 Foods That Exist Because Of Ancient Genetic Engineering 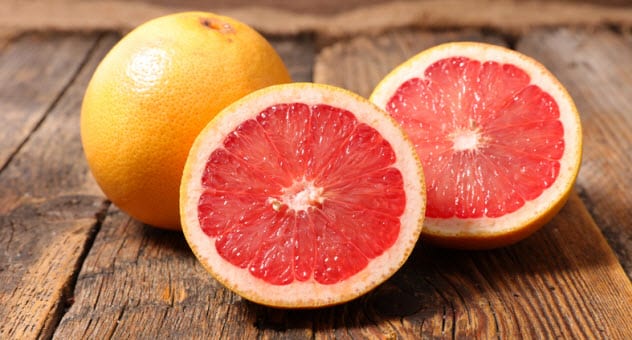 The grapefruit is a relatively new hybrid. It’s believed, although not confirmed that the grapefruit first appeared around 1693 when Captain Shaddock transported pomelo (Citrus maxima) seeds to the West Indies and planted them close to some orange trees. The pomelo and orange later cross-pollinated to create the grapefruit (then called shaddocks). However, the grapefruit was still unknown outside the Caribbean.

Europeans eventually learned of this citrus fruit in 1750 when Reverend Griffith Hughes encountered one. Hughes was so surprised with the discovery that he named the grapefruit “the forbidden fruit.” That was its name until 1814 when John Lunan, a planter and Jamaica magistrate, called it a grapefruit because they resembled the smaller and unrelated grapes when they were still growing.

The grapefruit finally reached the United States in 1823, but was mistaken for the pomelo. It was only determined to be a distinct fruit in 1837. However, botanists were still confused about its origin. It wasn’t until 1948 that they discovered it was a hybrid of the pomelo and the orange.[6]

History of Knott’s Berry Farm and the Boysenberry

The boysenberry was created by Rudolph Boysen of Orange County, California in 1923. Boysen, a horticulturist, planted grafted berry vines on his in-law’s farm in Anaheim, eventually cultivating a successful hybrid. Unfortunately, Boysen’s berries never found commercial success and it seemed like his unique vine would go the way of the dodo bird.

Several years later, a fellow farmer from California named Walter Knott heard about the berry and asked its creator if he could try to make something of it. Knott successfully brought the dying hybrid back to life at his Buena Park, California farm. Knott then named the fruit after Boysen, and Knott’s Berry Farm eventually became the would famous amusement park we know today.

The boysenberry is considered to be a variant of the blackberry, although it’s actually a hybrid of a blackberry and either the loganberry or the red raspberry. For all we know, Boysen could have created the berry from of all three vines.

That said, tere are claims that the boysenberry is actually a cross between the Eastern dewberry and the man-made loganberry. The loganberry was created in 1881 when James Logan crossed a raspberry with a wild blackberry. However, the early boysenberry was not a commercial success due to its short shelf life. It decays just two days after harvest.[7] 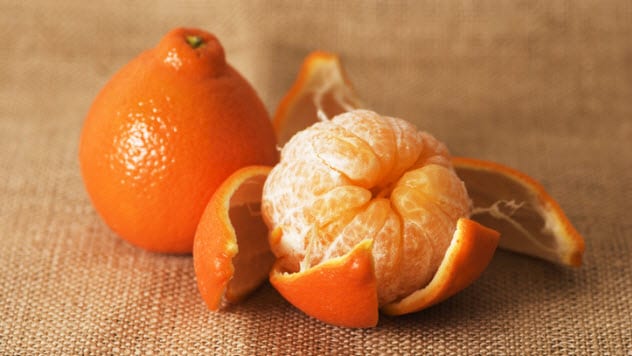 To add to the confusion, there are different varieties of tangelos and all are not necessarily created from tangerines and pomelos. One common variant, the Minneola tangelo, is a hybrid of the tangerine and the Duncan grapefruit. Another variant was created by crossing a mandarin with a pomelo, which technically makes it an orange.

The tangelo is believed to have first appeared in the forests of Southeast Asia 3,500 years ago when insects cross-pollinated the mandarin with a fruit that is closely related to the grapefruit. However, today’s tangelos are the result of a selective breeding program that started in the 1800s.[8] 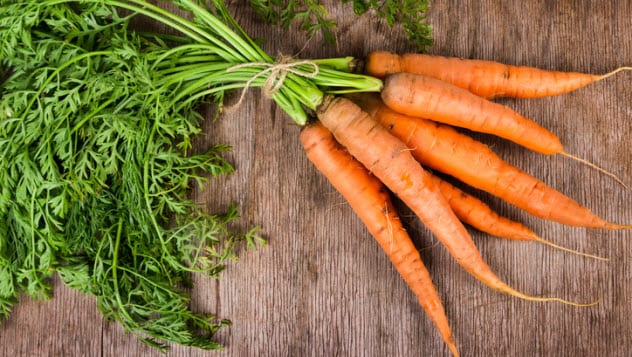 The earliest-known ancestor of the modern consumable carrot appeared in Persia in the 10th century. Some accounts say it was white, and others say it was purple. Unlike today’s carrots, those vegetables had lots of smaller roots of varying sizes. The Persians selectively bred the carrots with the biggest roots to create bigger roots and, ultimately, a big single root. 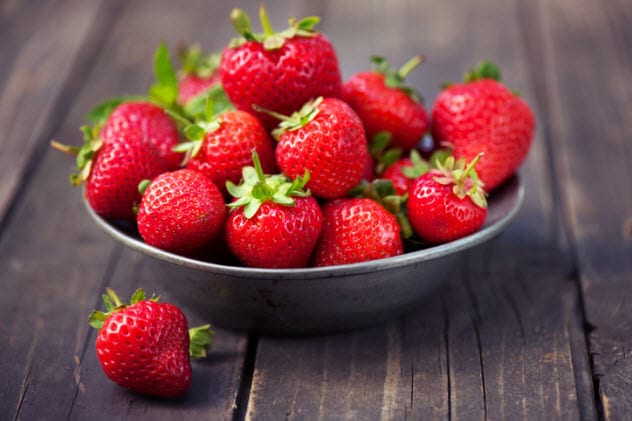 In the 1300s, French botanists started planting wild strawberries in their gardens when they realized that wild strawberries reproduced by cloning. Strangely, some strawberries never produced fruits and half of the ones that did suddenly stopped cloning and making fruits after some years.

The French managed to create wild strawberries that were 15 to 20 times their normal size, but they were still incredibly small. Antoine Nicolas Duchesne created the modern strawberry on July 6, 1764, when he crossed a male Fragaria moschata with a female Fragaria chiloensis from Chile.[10]

Before Duchesne created his strawberry, French botanists had never realized that strawberries had male and female parts. This was the reason some never produced fruits as some botanists had planted either males or females. Duchesne continued working on the strawberry until the French Revolution, leaving American and British botanists to perfect the modern strawberry.