It would be easy to compile a list of great home run hitters or other power statistics for this list. The long ball certainly brings people to the games. But that would ignore other aspects of offensive baseball like hitting for average, speed and base running for doubles and triples as well as stealing bases. Great hitters excel at most of these items and below you’ll find the best of the best. A case could be made that statistics and more to the point, historical statistics matter more in Major League Baseball than in any other sport.

The statistics for this list were gathered from easily accessible sites on the web and a simple comparison was made to determine who should be here. A word on statistics for the uninitiated: Batting average indicates the player’s ability to get a hit of any kind when he’s at bat. RBI’s or ‘runs batted in’ points to a hitter’s ability to get hits to drive players on base to score runs. Slugging percentage is a matter of a player who not only hits, but can hit doubles, triples or home runs. Other statistics will be discussed with each player profile. On a more controversial note, I have not included any players from the steroid era. Or more precisely, players who have been suspected of taking performance enhancing drugs. So you will not see familiar names like Bonds, McGuire, Sosa or Manny. Another controversial aspect of creating this list is trying to compare batters from different eras.

Many factors that should be noted are what ball park they called home, the pitchers they faced, certain rules that were advantageous to hitters or pitchers, dead ball versus live ball era and on and on. I’m sure we’ll hear about that in the comment section as well as “I cannot believe you left off Player X.” Well anybody can look the stats up, and if I’ve missed some, it isn’t because of a lack of research. 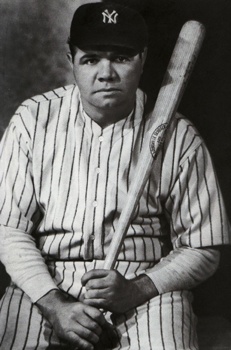 Anyone who knows anything at all about baseball knows about Babe Ruth. The Babe revolutionized the game by crushing the ball over the fence in numbers never before dreamed of. In my opinion, his home run record setting season in 1927 where he hit 60 home runs is clearly overshadowed by another record setting season in 1921. He hit 59 home runs, scored 177 runs, tallied 171 RBI’s, had a .378 batting average, 44 doubles, 16 triples and even stole 17 bases. Combine all of that and a gaudy .8463 slugging percentage and 457 total bases touched by the Bambino and you quite simply have the greatest offensive season of all time. Consider that before 1920, the record for home runs in a single season was 27. Ruth hit 54 in 1920 and 59 in 21. Quite the opposite of the steroid laced power hitter of recent times, Babe was eating hot dogs and drinking beer in the dugout after God knows what he did the night before. 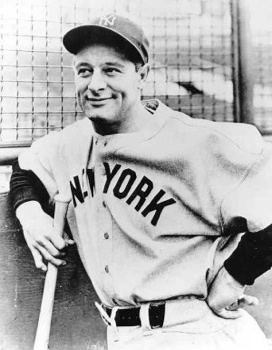 Another iconic figure of the New York Yankees famous ‘murderers row,’ was first basemen Lou Gehrig. Gehrig was the model of consistency and durability as he played in 2,130 consecutive games. A record that was recently broken by Cal Ripken in 1995. A close look at his statistics reveals some astonishing numbers because 1927 was probably his best season, but he had plenty of seasons that could have been mentioned. For example, his 184 rbi’s in 1931 still stands as all time best in the American League. His other 1927 statistics are fantastic as well. Starting with a .373 batting average, Gehrig had 218 hits including 52 doubles, 18 triples, 47 homers, 175 rbi’s, scored 149 runs with a 765 slugging percentage and touched 447 total bases. 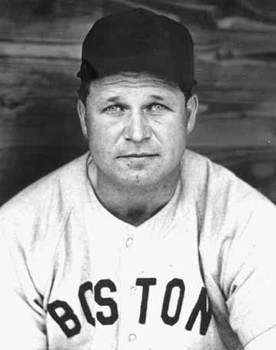 Jimmy Foxx was one of the most feared hitter of his time. He consistently was among league leaders in slugging and runs batted in. In 1932 he blasted 58 home runs, scored 151 runs and 169 runs batted in. He also finished the season with a .749 slugging percentage and totaled 438 bases. As great as this season was, he followed it up in 1933 by winning the triple crown for batters with a .356 average, 163 rbi’s and 48 home runs. For his efforts, Foxx won back to back MVP honors in 1932 and 1933. 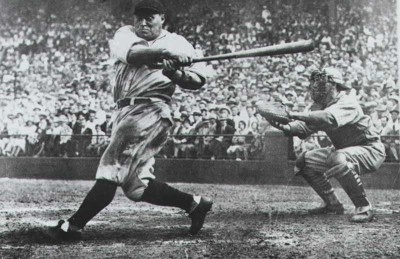 Wilson’s 1930 campaign was one of the best ever in the National League. Wilson set an all time record with 191 runs batted in. A record most consider untouchable. He also hit 56 home runs which was the first time in the National League anyone had ever hit over 50. That record stood until Mark McGuire and Sammy Sosa surpassed it in 1998, with the advantage of using steroids of course. His statistics for the 1930 season include a .356 batting average, 146 runs scored, a .722 slugging percentage and 423 total bases on top of the aforementioned home runs and rbi’s. 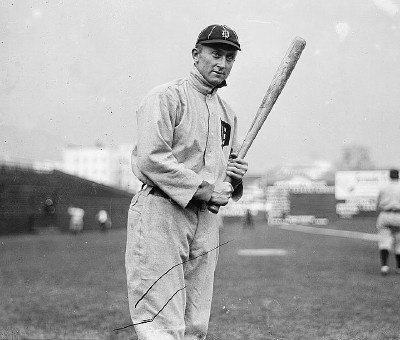 The Georgia Peach has been regarded by many experts as the greatest hitter of the dead ball era. Many of his records are still tops as of today, including career batting average (.367) career batting titles (11) career runs (2,245) and many others. He was a feared base runner and in 1911 he stole 83 bases which was practically unheard of for that day and age. He lead every major offensive category in 1911 except home runs. He finished the year with a .420 batting average, 248 hits, 147 runs, 127 rbi’s, 83 stolen bases, 47 doubles, 24 triples, a .621 slugging average and 367 total bases. There’s no doubt about Cobb’s ability and sheer will to succeed on the field, however most of his accomplishments have been overshadowed by his surly and racist behavior. His most famous scrape was when he attacked a heckler with one hand missing and several fingers missing on his second hand in the stands. When other fans pleaded him to stop because the man had no hands, Cobb reportedly said, “I don’t care if he has no feet.” 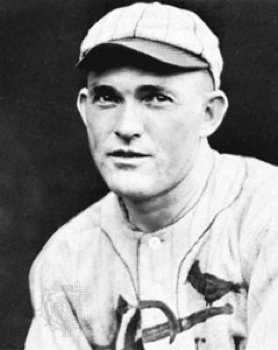 Hornsby became the only man in major league baseball history to hit over 40 home runs and have a batting average over .400 in 1922. Hornsby took full advantage of the new live ball era of baseball in which new rules as well as new balls were introduced that benefited hitters greatly. During that year Hornsby set records for rbi’s – 152, slugging percentage at .722, doubles – 46, hits 250 and runs scored. He also ended the year with an astonishing 450. At the end of his career only Ty Cobb’s batting average of .367 was higher than Hornsby’s career at .358. And according to Wikipedia, Bruce Hornsby is a distant relative of the great ball player. 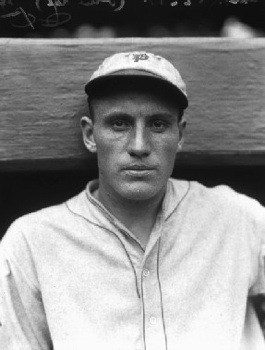 1930 was certainly a great year for hitters, as we’ve seen from Hack Wilson. Chuck Klein was in his second full season for the Phillies and hit a respectable 40 home runs but also had 59 doubles and sported a .386 batting average. Some of the other numbers are quite ridiculous as well as he scored 158 runs and tallied 250 hits along with a .687 slugging percentage. When the year was done he had touched a total of 445 bases. Probably the most ridiculous fact about all of these fantastic numbers was that he didn’t garner any votes for Most Valuable Player. Klein holds the record for home runs in his first two full season as a major league player at 83. 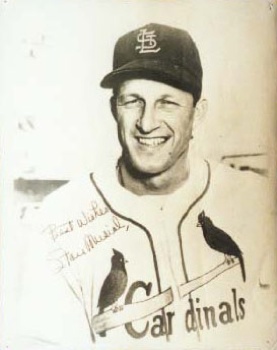 Musial was simply on fire during the 1948 season. When the dust settled he led every offensive statistic they could come up with except home runs which he was one short of. His batting average of .376 was 43 points ahead of the person in second place. He led the league in hits – 230, doubles – 50, triples – 18, rbi’s – 131, batting average – .376, on base percentage – .450, slugging – .702 and total bases – 429. All leading up to an obvious MVP award, his third. Musial never led the league in home runs, but finished 6th all time at the time of his retirement. Another strange quirk to his fabulous numbers was that he had an equal amount of hits in his home ball park and at away parks – 1,815 hits each. Stan the Man began his career in 1941 with two hits at the plate and finished his career 22 years later with two hits, to which a sportswriter said he hadn’t improved at all. 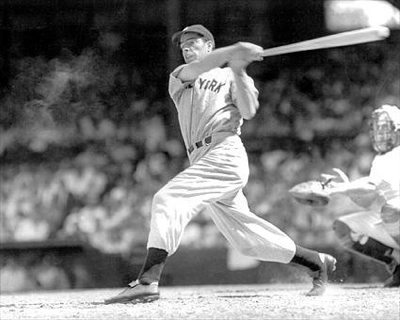 Joltin’ Joe DiMaggio helped lead the Yankees to 9 World Series Titles in 13 years. In 1937, his sophomore season for the Yankees, DiMaggio blistered the American League blasting 167 rbi’s, scoring 151 runs, 46 home runs with a .346 batting average and touching 418 bases. He led the league in runs scored, homers, slugging percentage and total bases and finished the year in second place for the MVP. And of course the Yankees tallied another World Series Championship. DiMaggio is also well known for marrying Marilyn Monroe and being mentioned in the Simon and Garfunkle song, ‘Mrs. Robinson.’ 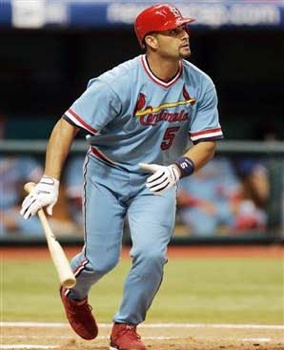 For a fine example of a modern day hitter, one needs to look no further than Albert Pujols. In 2003, Pujols had one of the best offensive seasons in Cardinal history. He batted .359, with 43 homers, 124 rbi’s, had 212 hits including 51 doubles and a .667 slugging percentage and scored 137 runs. Too bad he finished second in MVP voting to Barry Bonds. Pujols is again on fire in 2009, as his halfway season marks are quite astonishing. As of this date, he already has 32 home runs, 87 rbi’s, scored 73 times, touched 222 bases and a .773 slugging percentage – and the season is only half over. If he continues on this pace it will absolutely rank much better than his already amazing season in 2003.