After competing recently in an endurance event, I have become motivated to search online for other such events and was amazed at what I found. The following list is in no particular order (so no complaining please!) because they vary in distance, event and location and is very difficult to compare. The list below has some of the famous ones, so I invite anyone else to produce a list of the lesser known events, more extreme or ones I have innocently missed off. Enjoy with awe! 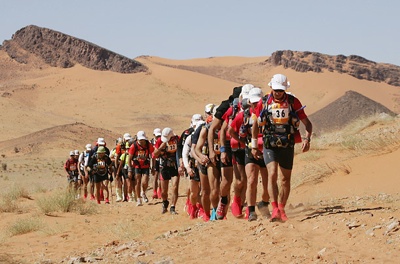 The Marathon des Sables (MDS) (Marathon of the Sands) is a six-day, 254 km (156 mile) ultramarathon, which is the equivalent to six regular marathons. The longest single stage (2009) is 91 km (55 miles) long. This multiday race is held every year in the southern Moroccan desert. It is considered the toughest foot race on Earth. The first event of the Marathon started in 1986. 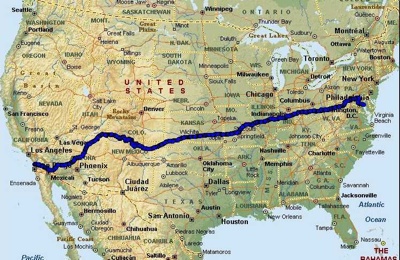 RAAM is the American answer to Europe’s Tour de France, yet the races differ. Both races’ courses have varied over their history. However, in the Race Across America the direction has always been from the West Coast to the East Coast of the United States, approximately 3,000 miles (4800 km) in about a week, making it a transcontinental event. A typical course might be from Oceanside, California, to Atlantic City, New Jersey. In contrast, the Tour de France is about 2,300 miles and takes about 3 weeks because it covers shorter distances each day.

Unlike most multi-day bicycle races such as the Tour de France, RAAM has no stages. There is no specified distance to travel each day. Until recently, there were no designated rest periods for food and sleep (sleep was optional). The clock runs continuously from start to finish as in a Time Trial. The final overall finish time includes rest periods. The winner is he or she who can ride the fastest while also making fewer and shorter stops. The winner usually finishes in eight to nine days, after riding approximately 22 hours per day through the varied terrain of the US. The recent addition of the team division has enabled finish times in the realm of six to seven days. Each racer has a support crew that follows in vehicles to provide food, water, mechanical repairs and medical aid. During the night, a vehicle with flashing lights is required to follow the rider to ensure safety.

Having to ride continuously for days with little to no sleep puts this event in the ultramarathon category. The continuous physical output places considerable strain on the competitors as well as their support crews. As many as 50% of solo participants drop due to exhaustion or for medical reasons. In addition, the race takes place on open roads, forcing participants to deal with sometimes dangerous traffic conditions. 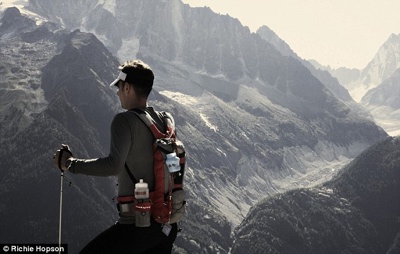 The Ultra-Trail du Mont-Blanc (also referred to as UTMB) is a mountain ultramarathon. It takes place once a year in the Alps, across France, Italy and Switzerland. The distance is approximately 166 km, with a total elevation gain of around 9,400 m. The race is run in one leg. Some believe that it is the most difficult foot race in Europe. While the best trailers complete the loop in slightly more than 20 hours, most runners take 30 to 45 hours to reach the finish line. From 2006, a second race Courmayeur – Champex – Chamonix (half-loop) has also been organised, and a third race was added in 2009: “Sur les Traces des Ducs de Savoie”. Today, the races consist of the following; UTMB: Ultra-Trail du Tour du Mont-Blanc (166 km +9,400 m) CCC: Courmayeur – Champex – Chamonix (98 km +5,600 m) TDS: Sur les Traces des Ducs de Savoie (105 km +6,700 m) PTL: La Petite Trotte à Léon (250 km +18,000 m) 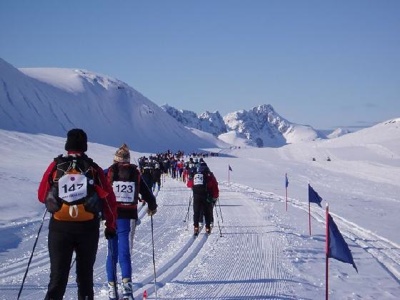 Competitors need to be in peak physical condition to take on this grueling challenge. The 160km (99.5 miles) Classic Arctic Circle Race ski route goes through beautiful arctic landscapes, 65km (40 miles) north of the polar circle. There is also the ACR 100, a shorter race of 100km (62 miles) covering similar terrain. The main race itself takes only three days, with the rest of the time given over to vital preparation, a Greenlandic church service (it is a Greenlandic tradition to start major events with one), and a gala party. 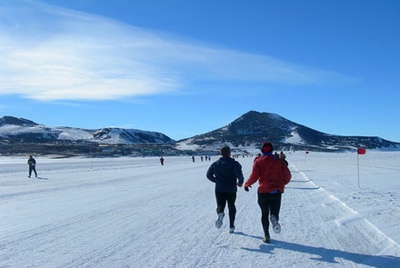 On December 12th, 2010, the sixth Antarctic Ice Marathon will take place at 80 Degrees South, just a few hundred miles from the South Pole at the foot of the Ellsworth Mountains. This race presents a truly formidable and genuine Antarctic challenge with underfoot conditions comprising snow and ice throughout, an average wind chill temperature of –20C, and the possibility of strong Katabatic winds to contend with. Furthermore, the event takes place at an altitude of 3,000 feet. 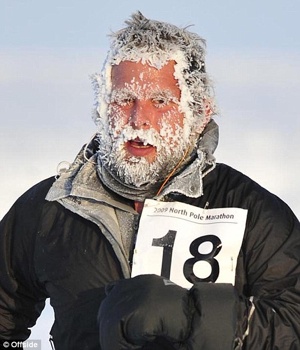 By competing in the world’s coolest marathon, the North Pole Marathon, you will become one of a truly select few to race at the top of the world – at the Geographic North Pole. And you will feel on top of the world when you manage to overcome the extreme sub-zero temperatures to finish 26.2 miles in one of the remotest parts of the planet. But first you must ask yourself if you have got the nerve and drive to travel to the North Pole and run on Arctic ice floes, with 6 to 12 feet separating you from 12,000 feet of Arctic Ocean? Can you handle the extreme cold? Are you fit enough? Do you want to push yourself to the edge? If the answer is yes, then you are ready for the North Pole Marathon. Join race director Richard Donovan, the first marathoner at both the North and South Poles, in a trip of a lifetime. Remember, this marathon is not run on land – it is run ‘on’ water, frozen water, in the high Arctic Ocean. 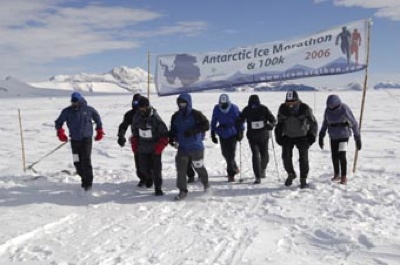 The Antarctic 100k ultra race will take place on December 15th. Undoubtedly, “the world’s coldest 100”, this ultra marathon challenge is reserved for only the toughest of endurance athletes. The 100k (62.1 miles) distance will seem endless, run under a sun that never sets against the backdrop of hills, mountains and large expanses of ice. This race presents the only opportunity to complete a 100k event on the frozen continent and creates the prospect of a 100k Seven Continents Club for global ultra athletes. 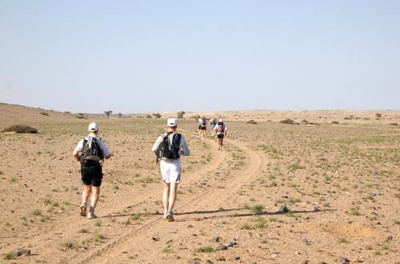 The Namibian 24h Ultra Marathon is a 24 hour ultramarathon that takes the participants through one of the oldest deserts on earth, the Namib Desert. The race is a 126 km, a distance equivalent to three marathons, self reliant race where participants must carry their own equipment (food, clothes, water, GPS, maps etc see kit list). Participants in the gruelling foot race cover 126 km, a distance equivalent to three marathons, in 24 hours. During the day the heat in the desert can reach above 45 degrees Celsius, and at night the temperature can drop as low as 0 degrees Celsius. The race was inaugurated in April 2008 and will be a yearly event. 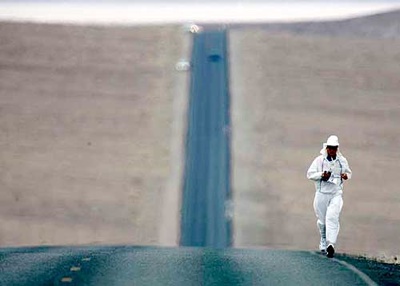 The Badwater Ultramarathon describes itself as “the world’s toughest foot race”. It is a 135 mile (215 km) course starting at 282 feet (85 m) below sea level in the Badwater Basin, in California’s Death Valley, and ending at an elevation of 8360 feet (2548 m) at Whitney Portal, the trailhead to Mount Whitney. It takes place annually in mid-July, when the weather conditions are most extreme and temperatures over 120 °F (49 °C), even in the shade, are not uncommon. Consequently, very few people—even among ultramarathoners—are capable of finishing this grueling race. 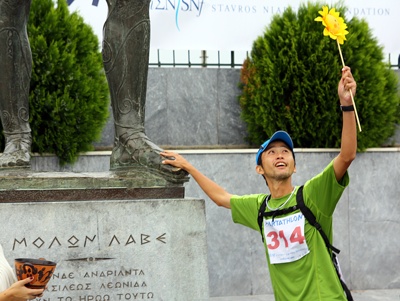 The race starts at 7:00 am, usually on the last Friday each September, at the foot of the Acropolis. It runs out of Athens toward the coast and runs along the coast towards Corinth via Elefsis, Megara, and Kineta. The route reaches the Corinth Canal at 78.5 kilometers and the runners hit the first of six major check points at 81 kilometers.

After Corinth, the race heads toward Ancient Corinth, Nemea, Lyrkia and at 159 kilometers, reaches the top of Mount Parthenio. From there, it continues south toward Nestani and Tegea, before reaching the main Sparta highway just before the 200 kilometer mark. Runners must pass through 75 checkpoints along the way and each checkpoint has a cut-off time. Runners outside the cut-off may be pulled out of the race although tardiness in the first half of the race is generally tolerated. This tolerance begins to fade after sunset and in the last third of the race, organizers may pull out runners who are either outside the time limit or who display extreme fatigue.

In order to run in this race an individual must meet at least one of the following requirements: