Everyone craves excitement. Some people find their thrills in little things like having a second glass of wine. Other people get their dopamine buzzing with adventurous activities. As far back as we can look, humans have been pursuing adrenaline rushes. Here are ten extreme sports from history that show our ancestors were willing to risk life and limb for a little pleasure.

Pentecost is one of the islands which make up the nation of Vanuatu in the South Pacific. Men of the island perform a ritual, which, to outsiders, looks like madness. Land Divers climb a 75 foot (25 meters) tall platform made from roughly hewn logs. At the top they tie a vine to each foot. Then they leap off the tower.

This ritual is said to be around 1,500 years old, though its origin is not exactly known. One of the legends is that a wife, upset by her husband’s constant sexual demands, fled into the jungle. He chased her as she climbed a tree to escape. To save herself she tied vines to her feet and jumped off. Her husband neglected to attach vines and so died when he hit the ground. Now men perform the ritual remind them not to fall for the same trick again. Land Diving is also associated with the yam crop. Those who dive from the highest height will have the best harvest.

Despite the apparent danger of the activity, injuries from Land Diving are surprisingly rare. The vines have good elasticity, and the soil beneath the tower is tilled to make it soft in case of a hard landing. 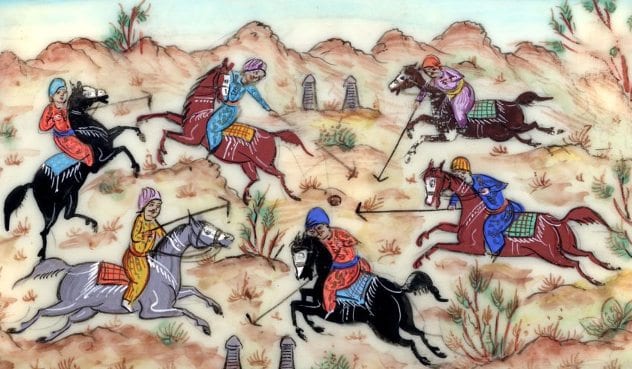 Polo is one of the world’s oldest team sports. In the ancient world, cavalry often played the decisive role in battles. To be able to turn your mount and direct it towards gaps could turn the course of a fight. The game of polo probably developed out of cavalry practice. You would think that a game would take the danger out, but a quick glance at polo’s history reveals a bloody list of accidents.

Polo developed in the ancient Persian Empire some time before the sixth century B.C. It was a popular game among warriors. When Alexander the Great was about to invade Persia, the Persian King Darius sent him a polo mallet and ball, suggesting the young man should go back to playing games.

The game spread across Europe and Asia. The polo court of Tamerlane the Great can still be seen in Samarkand. The Byzantine Empire also took up a type of polo using nets on poles rather than mallets.

Ramming horses together at high speed, using long sticks that can get tangled in their legs, and poor safety equipment made for dangerous play. The Byzantine Emperor Manuel suffered a concussion in one game, but he got off lightly. The Emperors Alexander and John of Trebizond died while playing polo.

In various towns throughout Greece and Bulgaria, a ritual takes place each year which may be thousands of years old. In its current form, the Anastenaria is a Christian veneration of the Saints Constantine and Athanasius. Worshippers hold the icons of the saints and then walk across a pile of burning wood.

Legend has it that when a church in Bulgaria caught fire, the nearby villagers heard the voices of the saints inside calling for help. Protected by the blessings of the saints, the villagers were able to bring the icons and relics of the saints safely out of the blaze. Now they repeat the same feat and believe that it is divine grace which brings them safely over the embers.

Not everyone supports the Anastenaria. The act of firewalking has been linked to the ancient worship of the god Dionysus, and some think that this ritual is of pagan origin and therefore should not be performed by devout Christians.

This Barbaric Version of Soccer Is the Original Extreme Sport

The Ancient Romans had a ball game called Harpastum which was apparently similar to Rugby. A small ball was passed between players and snatched from the air without letting it touch the ground. Roman commentators thought it was the ideal exercise for young men. The Calcio Fiorentino, a game which is said to have descended from Harpastum, takes all the physical contact of Rugby and discards all of those pesky rules.

Calcio Fiorentino, or Calcio Storico—Historic Football, was played in the central square of Florence in the 16th century. Teams of 27 face each other down and try, by any means possible, to get their ball over a fence at either end of the pitch. Players can wrestle, punch, and kick to get control of the ball. To add to the martial feel of the event, each time a goal is scored a cannon is fired.

The winning team in former years used to receive a cow. Now the winners get a free meal, and the losers get to go home to tend their injuries. 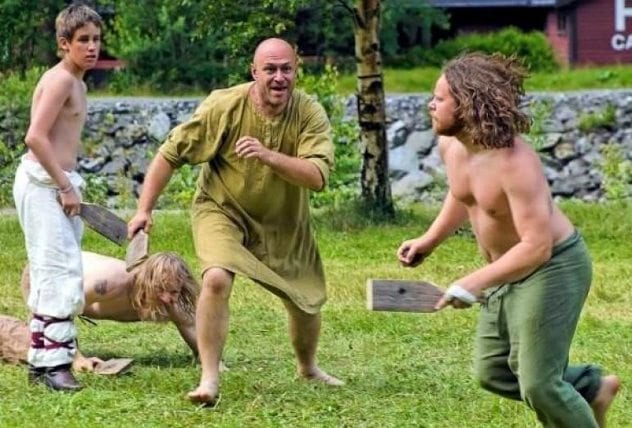 Knattleikr was a Viking game—and that should be enough of a clue that things are about to get brutal. Little is known for definite about Knattleikr, but there are clues in the Viking sagas which have allowed a tentative reconstruction of the game to be made.

Two teams of burly Vikings would meet carrying bats. The bat used may have been shaped in some way to allow a ball to be caught by it, and it was, the sagas say, sometimes broken in anger. The ball the teams used was small and hard enough to draw blood or knock a man down if thrown hard enough. Where the game was played is contested. Most records suggest a frozen pond or flat plain in winter, but this does not seem to have been a requirement.

Matches could last days, like a modern day Cricket match. Less like a Cricket match, players could be tackled and knocked about while the ball was in motion. 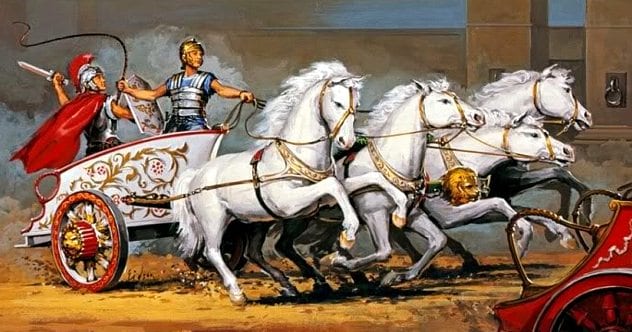 The wealthiest sportsman to ever live was Gaius Appuleius Diocles, who, in his career as a charioteer, amassed a fortune equivalent to billions of dollars today. As we shall see, given the risks he faced, perhaps he deserved it.

The Romans loved chariot racing. Images of races appeared everywhere in the city. Fortunes were gambled. A vast track, the Circus Maximus, was constructed in Rome. It could seat over 150,000 spectators. Chariots pulled by two or four horses would race seven laps of the circus. The key to victory was seizing the inside track. Accidents were common, and a study of charioteer graves has suggested an average age of death of just 22.

Chariot racing is so dangerous that even filming recreations can be deadly. The 1926 film Ben Hur featured a chariot race which cost the lives of five horses and one stuntman. 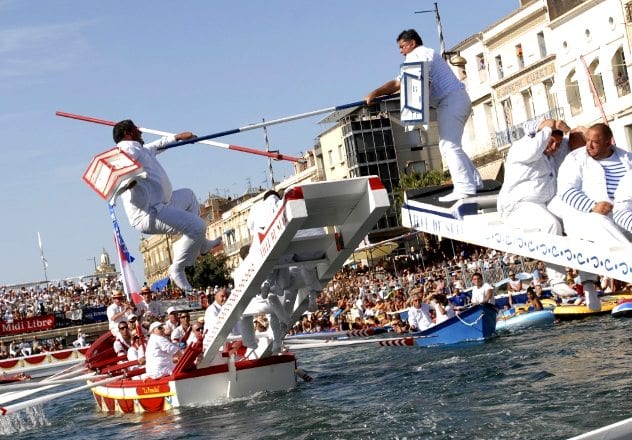 Jousting was hilariously dangerous. You took sharp sticks and charged at other people on horseback, with the intention of knocking them off with your sharp stick. At some point, people decided this sport was not dangerous enough and decided to add the excitement of potential drowning.

In Southern France in the 17th-century, teams of young men jousted on water. A team of bachelors in a blue boat attacked married men in a red boat. It was a chivalrous combat. The two boats rowed at each other at full speed, propelled by ten oarsmen, while the champions, with a shield and armor, stood on boards attempting to knock their opponents off.

On the Ancient Nile, water combats were a contest with real world results. Fishermen on the Nile would joust for access to waters. Combat between boats of fisherman are attested to in reliefs, and they did not have dainty rules. While most of the crew controlled the boat, the fighters would have at it with poles, trying to knock the other down. Once in the water, the combatant would be at the mercy of hippos and crocodiles. 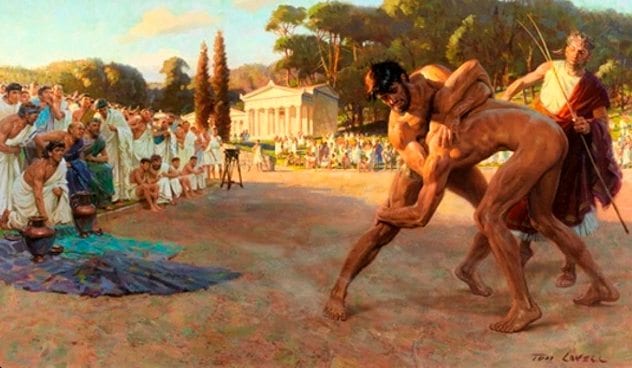 In Ancient Greece, Pankration was an Olympic sport in which two men faced each other in a brutal fight with hardly any rules. The only rules were that the fighters could not bite, gouge, or attack each other’s genitals. Anything else was fair game if it brought the opposition down. Loss came when you declared your submission.

Arrhichion won the Pankration contest in the ancient Olympics in an unusual way. He was being held in a chokehold by his competitor while reaching for the other’s leg. Arrhichion managed to break the other fighter’s ankle. This, understandably, made the other submit. It was then that the judges found that Arrhichion had been suffocated. Nonetheless, Arrhichion’s corpse was given the victor’s crown and paraded through the streets. 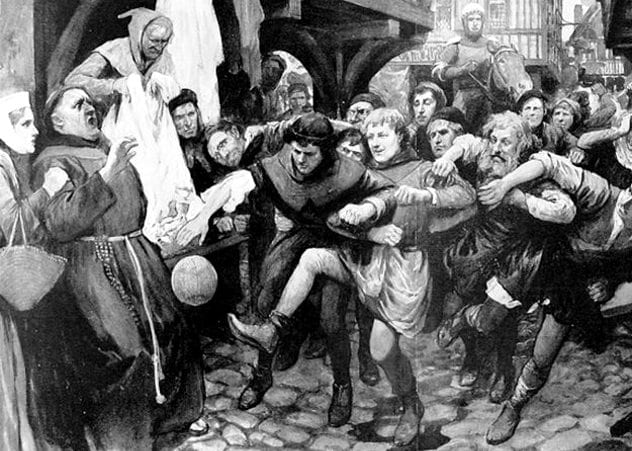 In England from the 14th century onwards, Shrove Tuesday became a popular day for youths to gather and play with a ball. These games were the genesis of not only modern soccer but also football hooliganism. An inflated pig bladder was produced with the aim of returning it to your team’s village. It was essentially a riot with a goal. Broken limbs were common, and deaths not unknown.

It was common for hundreds of men to compete in Mob Football when whole villages were competing. In large cities, it could be a competition between groups of apprentices which ran through the narrow lanes and streets. In 1365, King Edward III banned football because it was causing a nuisance and distracting able-bodied men from practicing their archery. Football trained men in fighting, just not the right sort.

In one Mob Football match in Pont-l’Abbé, France, 40 men are said to have drowned in a pond when the ball strayed into the water.

Bull Jumping – Inside the Human Body: Hostile World – BBC One

In 1400 B.C. on Crete, at the Minoan palace a Knossos, a mural was painted showing a leaping youth back-flipping over a charging bull. Such images are not unique. Paintings and sculptures of figures grasping the horns of a bull have been found at numerous Minoan sites.

Some researchers say that such images do not display a real event but rather a mythical one. Many Cretan images show men using a bull’s horns to spring over the back of the beast, which does seem hugely risky. Others point to modern bullfighting events where young men regularly leap over bulls. It seems likely that bull-leaping was a ritual which actually took place on Crete.

It should be remembered that Ancient Crete was home to the legendary Minotaur—a half-bull, half-human monster requiring human sacrifices. Is it possible that the bull-leaping ritual, which no doubt took many young lives, lived on through the legend of the Minotaur?