Papaver Somniferum, the Opium Poppy, has been considered one of the most influential, as well as interesting things in the world for thousands of years. For those unfamiliar with it, the poppy produces opium, the euphoric painkiller that is the starting point for heroin. Depictions of the plant have been traced back to the Sumerians of 6000 years ago. The beautiful flower has been worshiped as a gift from the gods, and just the same has been feared for its potential to destroy millions of lives. Rather you see them as divine, or quite the opposite, it’s hard to argue how much influence they’ve had in our world. Here are ten particular areas that the plant and its drug have dramatically impacted. 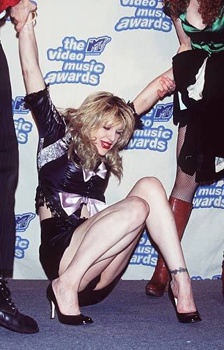 “Music is a beautiful opiate, if you don’t take it too seriously.” Henry Miller. Think of your favorite rock band from the 70s or 80s. I’ll bet you the shoes on my feet that at least one of their songs was inspired by, or if not, directly refers to heroin. It became popular with the rock community for its mild altering effects. Inspiring romanticism, creativity, joy, fun, and of course pleasure made it a hit to rebellious world. Some songs you might be familiar with that have been thought to refer to the drug – “The Needle and the Damage Done” by Neil Young, “Mr. Brownstone” by Guns N’ Roses, “Heroin” by Velvet Underground, and “Comfortably Numb” by Pink Floyd (that one is probably the most arguable). Courtney Love (above) did well to summarize the relationship between musicians and heroin: “the drug you do if you’re in a fuckin’ four-star hotel and you can order all the goddamn room service that you want and you can just lay in bed and drool all over yourself because you’ve got a million bucks in the bank. That’s the drug you want to do if you want to be a kid forever.” 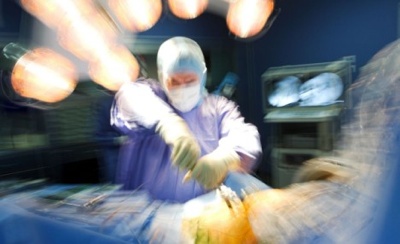 Surgery is thought to have been practiced for centuries, pioneered by ancient civilizations in Egypt, India, Greece and China. The gap between ancient surgery and modern lies heavily on the control of the inevitable pain that comes with it: anesthesia. While local anesthesia is available for us by a completely different plant, the Coca, general anesthesia became possible with the Opium Poppy. The art of putting patients out for surgery made a breakthrough in the 19th century, when Morphine, one of the opiate alkaloids found naturally in opium, was extracted from the plant. With this discovery, surgery was able to advance to the previously unheard of feats we think of commonly today. Soldiers were able to inject themselves with Morphine in the latter half of the Civil War, making the removal of bullets a much less excruciating experience. Nowadays we have other methods of general anesthesia for surgery, such as hypnotics (propofol) and Dissociatives (nitrous oxide), but nevertheless morphine and other opium-derivatives are still commonly used. 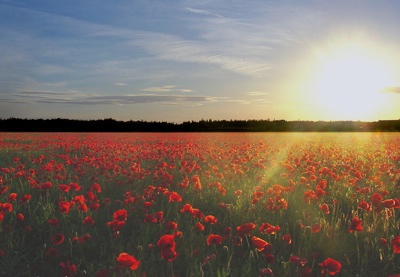 Stepping aside from the drug the Opium Poppy produces; let’s focus on the flower itself. At a time referred to as the “common garden poppy”, the plant is widely cultivated for ornamental purposes all over the world. The flower, depending on the particular variety, ranges from red to white and even purple hues. The capsules containing the opium are very interesting looking and easily emphasizes the plant as a poppy. Even the tiny black seeds are used to decorate food, such as cakes and muffins. The poppy seeds you can go get at your local grocer this afternoon are indeed the same species of poppy used to harvest opium. While not trying to drift too far off topic, I’ll note that the common “myth” that someone who consumes poppy seeds can fail a drug test is absolutely true and proven. The seeds contain enough opiate alkaloids to make it show in your system. My advice: let your employer know if you’ve been eating anything with poppy seeds before your drug screening results come back, or you might be looking for a new job. 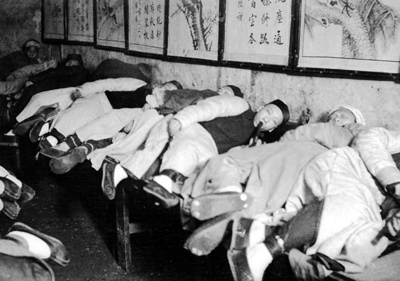 The customs and traditions of societies throughout written history have likely been much more influenced by the Opium Poppy than your high school history teacher let you know. Starting back in Ancient Greece, Homer described opium’s pleasant effects in “The Odyssey”: “…had a happy thought. Into the bowl in which their wine was mixed, she slipped a drug that had the power of robbing grief and anger of their sting and banishing all painful memories. No one who swallowed this dissolved in their wine could shed a single tear that day, even for the death of his mother or father, or if they put his brother or his own son to the sword and he were there to see it done…”. Fast-forward to 19th century China, where the drug was so popular it’s estimated that at least a quarter of Chinese men were addicted to it. It was smoked in opium dens as a pastime, something at first thought to be joyful and social. This was before its addictiveness was well known. The Chinese eventually outlawed it, leading to the Opium Wars in the next section. To this day opiates are used worldwide recreationally and and impact many cultures. 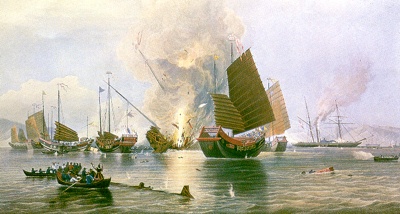 The Opium Wars were two separate affairs between the Chinese and British, both stemming from China’s opium prohibition and its effect on the British Empire’s cash crop. The first war was fought between 1839-1842, and the second 1856-1860. Massive opium production was occurring in British India and acted as a huge source of wealth, as China’s demand for it was unrelenting. When China’s government realized the harmful effects of so many men being addicted to it, it was outlawed. One way to put it: they quit cold turkey. Although the drug was still being smuggled into China, the effects of Britain losing its main source of money were very damaging, and it would lead to war. The British would end up defeating China, and they were forced to allow opium to be imported into the country. Even the Governor-general Lin Zexu’s efforts of destroying millions of pounds of it and arresting some 1700 dealers were futile; it was an entire nation under the spell of the Opium Poppy. 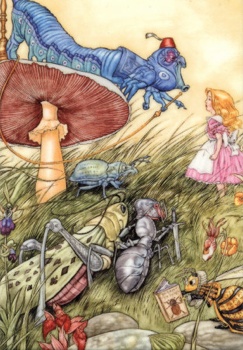 I remember in March I was so excited to see the new Alice in Wonderland movie coming out. I’ve always found the story interesting and I decided to do some research on it and its original author, Lewis Carroll. I was surprised to find that it is popularly held that he was an avid opium user, and that the drug was probably a huge inspiration to the story’s imaginative world and characters. This is disputed by some – but laudanum was popular in his time so it is certainly not improbable that he used it. Authors such as Arthur Conan Doyle, Oscar Wilde, and Charles Dickens were all fans of the Opium Poppy’s inspirational potential, showing just how much of an impact a single plant has had on literature, especially notable in the 19th century. The Wizard of Oz, commonly referred to as one of the greatest and timeless films ever, comes from an opium inspired book. However, you might have been confused by the scene where Dorothy falls deeply asleep in the poppy field before Emerald City. But perhaps the most famous work inspired by opium use is Kubla Khan by Samuel Taylor Coleridge – he was using opium to counter the effects of dysentery and in doing so dreamed up one of the most ravishing poems in the English language. 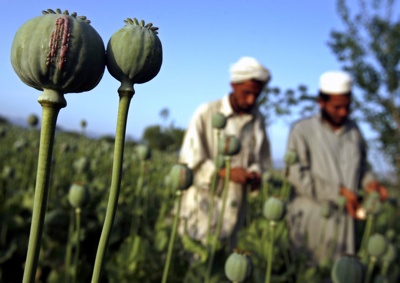 Knowing that the outlawing of opium in China lead to two major wars, it’s obvious that the financial potential of the plant has been huge throughout history. From the opium harvesters of the past, to the Pharmaceutical Companies who use the poppy to produce medicine, to the common street heroin dealers, one thing is clear: Opium Poppy is a cash crop. It’s estimated that growing kilogram of opium costs a farmer about $300. He can sell that to a drug dealer for around $800, making him a hefty little profit. That dealer, after converting the opium to heroin, will make $16,000 on the same amount of product it took $300 and some help from nature to grow. An enjoyable modern depiction of this process is 2006’s “American Gangster”. A man goes from rags to riches after getting connecting from poppy farmers in Vietnam. 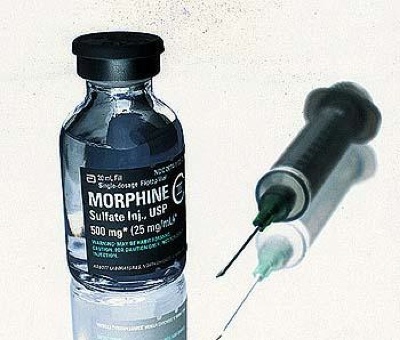 While pain relief is of course a key to surgery, it goes much further than that. Opium has been used from the very beginning for its painkilling properties. In some parts of the world, there is no such thing as retirement. A man will work his whole life, and opium’s relief has sometimes been the only way to keep living. It’s been called “God’s own medicine”, and considered divine and sacred by many people. The two alkaloids in it that bind to out brain’s opioid receptors are morphine and codeine. Many opiate derivatives have been discovered from these; heroin (diacetylmorphine) and hydromorphone from morphine, and oxycodone and hydrocodone from codeine. Since these are semi-synthetic, these substances may start from the poppy, but have to be chemically structured in labs by Pharmaceutical Companies 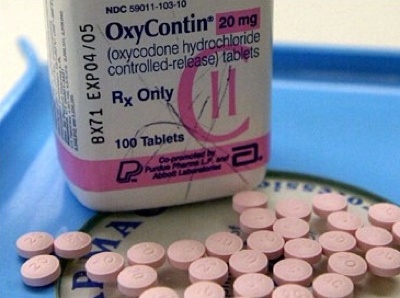 Opium Poppy may be quite easy to grow, but its genetic properties have made pharmaceutical companies billions and billions of dollars. Bayer marketed Aspirin and Morphine as painkillers for uncontrolled use in the 19th century. The rose of morphine’s superiority to aspirin came with the thorn of its unforgiving addictiveness. Finally a solution, the rose without a thorn. A drug with the power of morphine that wouldn’t hook you: heroin! Well, you can guess what comes next, heroin (named for being thought of as a heroic substance) was found to be even more addictive. Opiates were criminalized in the United States, and used legally only when a medical doctor saw fit to let you. In the 20th century many other opium-derivatives were discovered, such as oxycodone (OxyContin, Percoset), hydrocodone (Lortab, Vicodin), and oxymorphone (Opana, Numorphan). Next time your doctor gives you medicine for your sore back or broken foot, chances are that medicine came from the Opium Poppy. 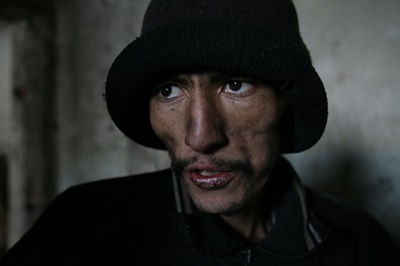 This section really has little need for further description. Opium Poppy introduced society to one of the most harmful and abundant issues of today: drug addiction. With moderate, spiritual opium use addiction wasn’t an issue, but as time went on: chronic use, harmful ways of ingestion, and chemically altering the substance all helped see the downfall of the plant’s “divinity”. It may be the most useful, helpful, and peaceful thing in history. Or it may be the plant responsible for a father’s neglect or a brother’s death. Whichever way you look at it, the Opium Poppy is one of the most influential things to ever grace this Earth.