Diamonds are not only a woman’s best friend. They are also a geologist’s best friend. These precious stones sometimes contain unbelievably rare or unseen elements that reveal the deepest secrets buried in our Earth.

By analyzing diamond finds, scientists have been able to guess what lies underground and have even uncovered some facts about the history of our Earth. In rarer instances, these diamonds come from outer space. 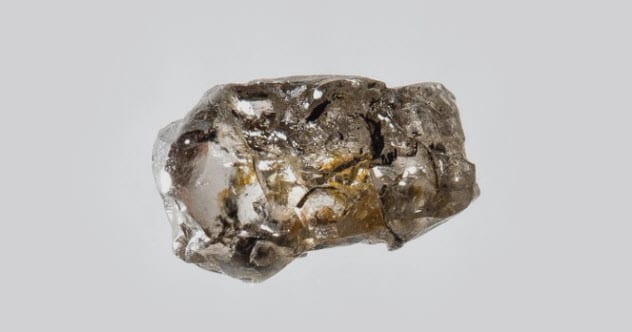 Ringwoodite does not exist overground because it can only be produced under the insanely high pressures that occur deep underground. Scientists have gotten their hands on it a few times, but it always changed into another form in the absence of the massive underground pressure. However, geochemist Graham Pearson managed to get ringwoodite in its natural form.[1]

The ringwoodite was trapped inside a diamond found in a mine in Juina, Brazil. Pearson and his colleagues suggested that it was brought to the surface during an earthquake. Pearson made the discovery by chance. He was actually trying to date the diamond when he discovered that it contained ringwoodite. 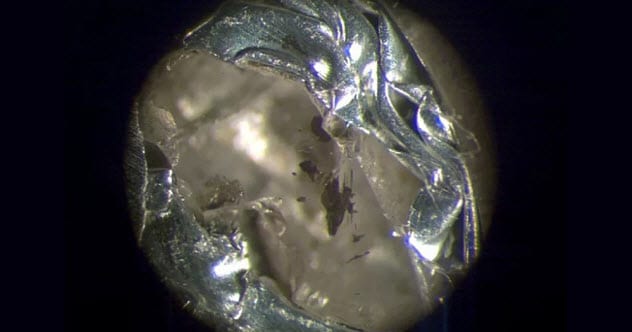 However, that changed when scientists found a stable sample inside a diamond that was just 1 kilometer (0.6 mi) underground in Cullinan Diamond Mine in South Africa. The actual mineral is calcium silicate perovskite (CaSiO3), which is believed to be the fourth most common mineral on Earth.

Interestingly, the diamond that contained the sample is one of the rarest diamonds on Earth. It is only formed around 700 kilometers (435 mi) underground where the pressure is 240,000 times greater than on land. Scientists believe that the calcium silicate perovskite sample got trapped inside the diamond as it formed.[2] 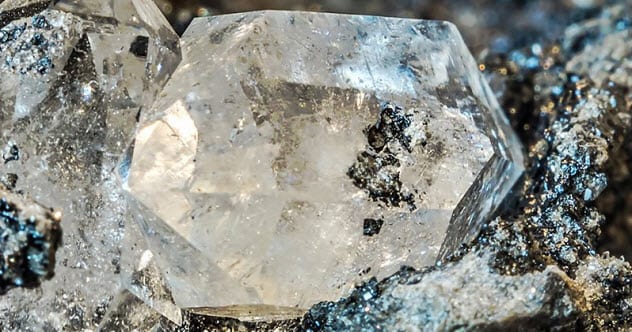 As we mentioned earlier, scientists have speculated about the existence of an ocean inside the Earth’s mantle. Scientists believe that this ocean was formed when water from the planet’s oceans was dragged underground by parts of the sinking Earth crust.

Scientists know that the Earth’s crust is still sinking into the mantle. But they cannot determine how long it has been sinking or the size of this ocean. For all we know, it might not even exist. However, recent discoveries suggest the existence of this ocean.

In March 2018, it was reported that scientists had discovered ice samples trapped in diamonds that formed in the Earth’s mantle. They believe that the ice was created from part of the water dragged into the mantle. This discovery becomes more interesting when we realize that the interior of the Earth is very hot and ice doesn’t form in hot environments.

Scientists call this ice-VII, which is only formed between 610–800 kilometers (379–497 mi) underground where the pressure is over 24 gigapascals. Three samples of ice-VII have been found in diamonds so far—two from mines in South Africa and a third from a mine in China.[3] 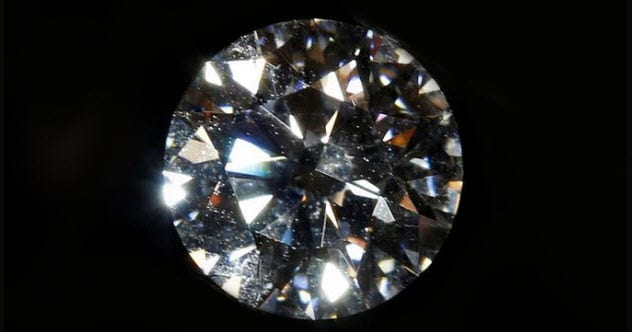 By analyzing 53 of these diamonds, scientists have discovered that the Earth’s mantle contains lots of iron and nickel as well as trace amounts of methane, hydrogen, and garnet. Interestingly, they did not find any trace of oxygen. This counters the belief that there is an abundant amount of oxygen inside the mantle. 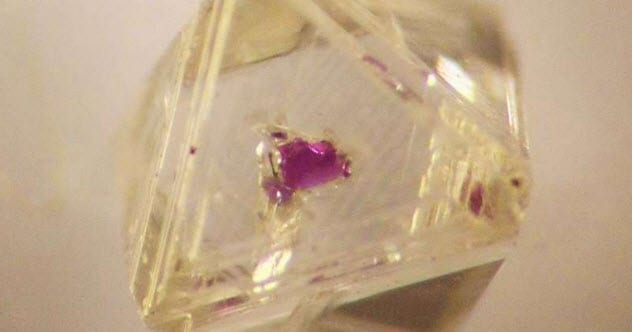 Harzburgitic inclusions are a type of rock you have probably never heard of. They are a subcategory of peridotite rocks, which are the commonest rocks found in the Earth’s mantle. Due to their abundance in the mantle, scientists often date diamonds by dating the harzburgitic inclusions they contain.

Some researchers at Vrije University in Amsterdam made an interesting discovery when they dated 26 diamonds containing harzburgitic inclusions. Nine of the diamonds were formed about three billion years ago when a big continent broke up into smaller continents and created superhot situations deep underground.

They discovered 10 of the diamonds were just 1.1 billion years old, which is really short in Earth’s timeline. In fact, this was the first time that scientists were finding one-billion-year-old diamonds. These precious stones are usually billions of years old because the Earth was exceedingly hot at the time. The planet was too cool to produce any diamonds one billion years ago.[5]

However, scientists believe that a huge volcanic eruption in today’s Zimbabwe provided the required heat to create these young diamonds. Their discovery sheds a new light on diamond mining because miners often test for the age of harzburgitic inclusions in prospective mines. 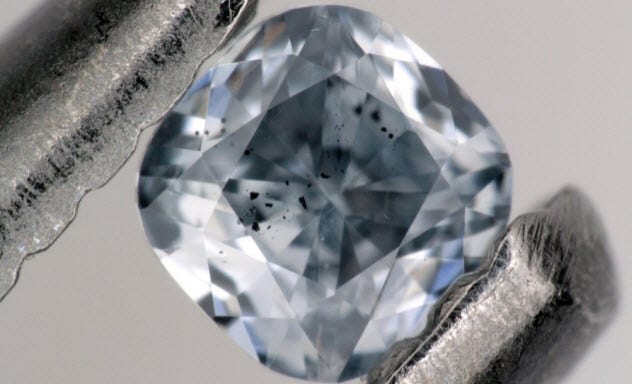 Blue diamonds are blue because they contain boron, which is rarely found underground. The majority of the world’s boron supply is found overground in the Earth’s oceanic crust. So, how did boron get deep into the lower mantle and even inside the world’s deepest and second-scarcest diamond? 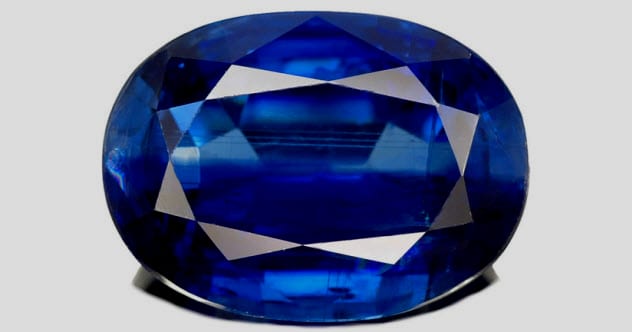 Although it is rare, diamonds sometimes turn up with another precious gemstone, such as a ruby or kyanite, inside them. We already mentioned that diamonds appear blue when they contain boron, but they could also appear blue if they contain kyanite.[7]

Kyanite can also be gray, green, orange, white, yellow, or even colorless. Blue kyanite is the most valuable even though white kyanite is rarer. Fraudulent sellers sometimes pass off blue kyanite as the costlier blue sapphire. 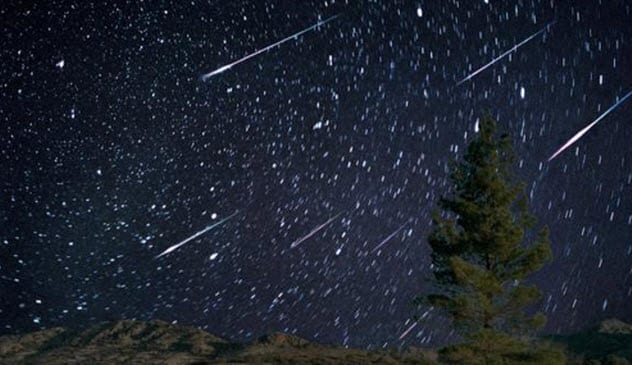 Pure carbon exists in three major forms: diamond, graphite, and buckminsterfullerene. However, scientists have discovered two other forms that contain mutated forms of carbon, making them harder than diamond. Interestingly, scientists predicted the existence of these crystals long before confirming their existence.

The superhard crystals were not found here on Earth. Instead, they were from the ureilite-class Havero meteorite that crashed in Finland in 1971. This type of meteorite often contains graphite and diamond.

Unfortunately, scientists could not determine the hardness of the crystals because they were too small. However, they knew that they were harder than diamond because they could not be polished with diamond paste.[8] 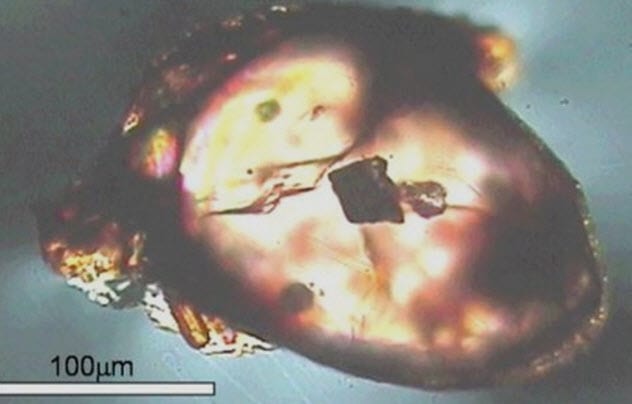 In 1983, some researchers from Curtin University in Australia found 22 diamonds inside some zircon crystals in Jack Hills in Western Australia. A study of the diamonds revealed that they were made of carbon-12 (aka light carbon). The find was fascinating because diamonds containing huge amounts of carbon-12 are only formed when there are living organisms around.

At that time, Earth was a terrible place to live, even for the smallest organisms. The planet was extremely hot back then. The ocean was filled with superhot magma instead of water. Scientists suspect that the carbon-12 could have been brought to Earth by meteorites if it was not created by living organisms.[9] 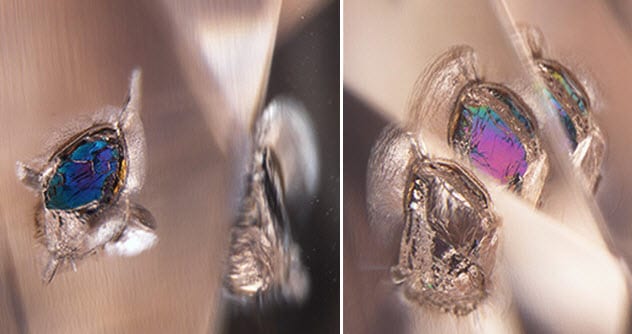 Diamonds containing ferropericlase are easily recognizable because they are iridescent. They will change their color depending on the angle at which they are viewed and the angle from which light hits them—much like when you view light through a soap bubble. No one knows why ferropericlase diamonds behave this way, but the presence of fluid or magnesioferrite has been fingered as a possible reason.

However, not all diamonds containing ferropericlase reflect colors. Some just appear transparent brown. Besides, the presence of ferropericlase is not enough evidence to prove that a diamond was created in the mantle. Ferropericlase diamonds could also be formed high above the mantle in areas where there is a short supply of silica.[10]

Read more fascinating facts about diamonds and other gems on Top 10 Reasons Diamonds Are Not As Great As You Think They Are and Top 10 Rarest Gems.