[Warning: spider pictures] It happens a lot in zoology, that little creatures get little attention unless they have a catching name. Often, this name is inspired by their resemblance to one of the big, charismatic beasts everyone knows. Even so, most people don’t know a lot about these little guys, and therefore we dedicate this list to those awesome little critters, often as fascinating as their bigger namesakes. 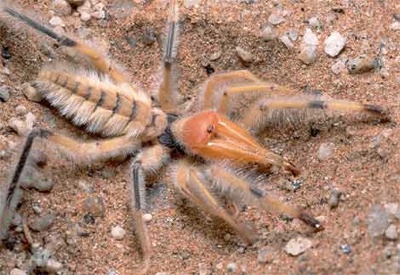 Hoax e-mails have made Camel Spiders famous, or rather, infamous, but still most people know nothing about them. First of all, these animals, as scary looking as they may be, are completely harmless to humans. They are never over 3 inches in length, have no venom glands. and although they can bite if harassed, no human has ever died of a Camel Spider bite. They are also not real spiders, but belong to a different group of arachnids known as the Solifugids, or “those who run away from the sun”. Indeed, although often found in deserts, Camel Spiders prefer to hide under rocks and in shadowy places during day, and they come out to hunt at night.

They feed on whatever little animal they can catch and crush with their powerful pincers. They are also pretty fast, so much so that they are also known as “wind scorpions”. As for why they are called Camel Spider, it’s simply because they are found in the desert, and not because it likes to kill camels as the myth says. Scientists believe that there are about 1000 species of these fascinating little creatures, with many to be yet discovered. 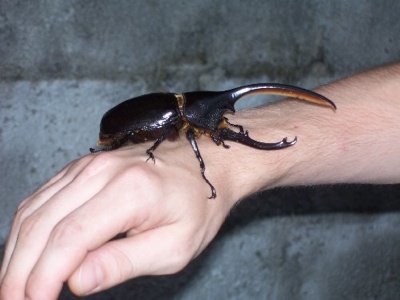 Rhinoceros beetles are so called because they often have horns resembling those of true rhinos; there are actually many different species, and some of them are named after other animals; for example, one of the largest rhinoceros beetles is the Elephant Beetle from Mexico, which can be over 12 cms long! Larvae of this species are even bigger than the adults.

Rhinoceros beetles are famous because they are the strongest animals in the world; they can lift 850 times their own weight! Compare this to an actual elephant, which is only able to lift a quarter of its own weight. Rhinoceros beetles feed on vegetal matter and some species are considered to be plagues, while others, like the Elephant Beetle, are endangered due to habitat destruction. 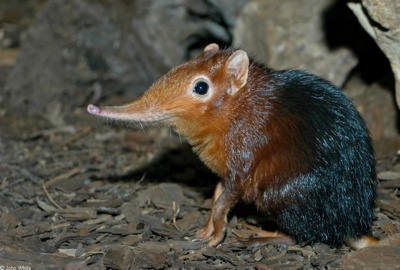 Around 20 species of these funny looking little mammals are found in Africa’s savannahs, forests and deserts. They are not actual shrews, and are not related to elephants either; their name was inspired by their long, flexible snout. They have a long tongue like an anteater’s, and a very keen sense of smell, and they spend much of their time keeping “trails” in the bush, removing dead leaves, twigs and pebbles. Any small animal or insect careless enough to trespass these trails is caught and devoured by the Elephant Shrew.

The Elephant Shrew can also use the trails as escaping routes, allowing it to run faster if attacked suddenly by a predator. An interesting trait of this animal, is that, apart from humans, it is the only mammal that runs in a bipedal posture (kangaroos don’t run, and although pangolins, bears and some apes can walk bipedally too, they always run on all fours). 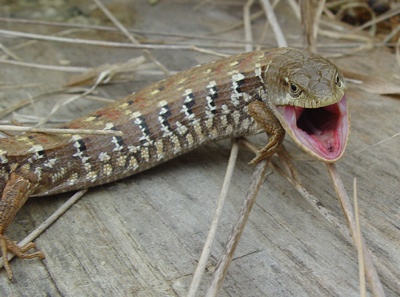 Alligator lizards are so called because their skin resembles that of an alligator or a crocodile, particularly in the back. They are also as ill tempered as their larger namesakes, and it is said that their teeth are so sharp, that even a bite from a small one draws blood. However, they don’t attack unless provoked, and their bite is not dangerous.

There are about 70 species of alligator lizard all around the world. Among their unusual traits is the fact that they shed their skin in one piece, like snakes, and unlike most other lizards which shed their skin in little pieces. Also, some alligator lizards can change color, although it takes them a long time to do so compared to, say, chameleons. 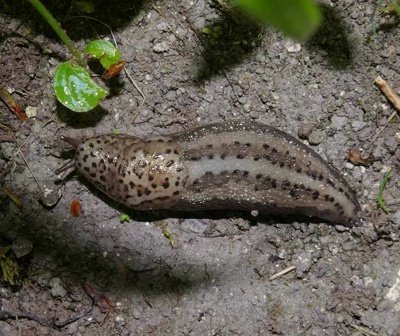 The leopard slug is native to Europe, and is one of the largest kinds of slugs, measuring up to 20 cms. It gets its name for its spotted body; but although all leopard slugs may look the same to the untrained eye, they share an interesting trait with their feline namesakes; the spotted pattern is unique to each individual, just like a fingerprint! Leopard slugs are famous because of their unusual mating habits; they mate basically in the air, hanging from a branch by a thread of mucus produced by their own body.

Just like the leopard, the leopard slug is a ferocious predator that moves quite fast for a slug, and feeds on other slugs, as well as worms and other soft bodied creatures. However, it is quite adaptable and will not reject vegetable matter as well. 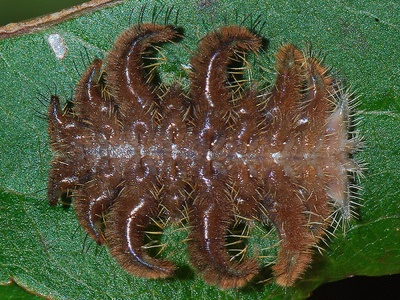 Don’t be fooled by the name! This animal is not another slug. It is actually a caterpillar, the larval stage of the so called Hag Moth of North America. It’s body is covered with hairy, limb-like projections which are not actual legs (or “tentacles”, as people often think), and can be shed by the caterpillar without any harm. These projections are supposed to resemble a monkey’s furry limbs or tail, hence the name.

Although the “hairs” are urticating and serve as a defense, this is not a particularly dangerous caterpillar and it is not considered to be a plague either. The adult moth is also interesting, for it mimics a stinging wasp so that birds and other predators stay away from it. 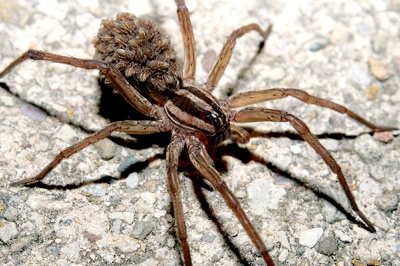 The beautiful Rabid Wolf Spider is easily recognized by its striped body; found in the US, it is completely harmless to humans despite its scary name. It is only one of many kinds of wolf spiders (family Lycosidae), so called because they are active, fast moving predators, like wolves; they have good eyesight and do not spin webs.

A notorious member of the wolf spider family is the true tarantula (Lycosa tarantula), which is not related to the big, hairy spiders we usually know as tarantulas today, and gets its name from the Italian city of Tarento, where it seems to be particularly common. 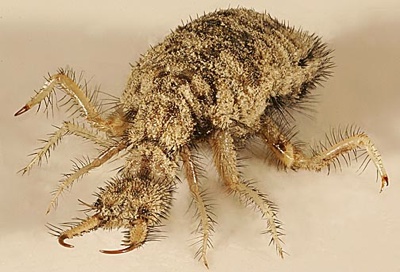 The antlion is so called because of its predatory habits during the larval stage, which make it a “lion” among insects. In North America they also go by the somewhat less frightening name of “doodlebug”. They are found all around the world, usually in sandy habitats. Antlion larvae hunt by digging a conical-shaped pit in the sand, and then burying themselves in the bottom.

The sand in the pit’s edge is loose, and the angles are very steep, so whenever an unsuspecting insect, usually an ant, steps on the edge, the sand collapses and the victim falls to the bottom of the trap, where the antlion larva is waiting. Even if the victim manages to escape the predator’s long, sharp jaws and tries to climb out of the trap, the antlion often has another trick up its sleeve; it throws sand from the bottom of the pit to the edges of the trap, causing the victim to fall once again into its reach.

Once it has captured its victim, the larva uses small tooth-like projections on its jaws to suck the body fluids of its victim, throwing the remains out of the pit once it finishes its meal. Adult antlions usually feed on nectar and vegetable matter and are not as impressive as their larvae behavior-wise, but they are indeed beautiful insects, somewhat similar to damselflies, and some species can have pretty impressive wingspans- up to 15 cms! 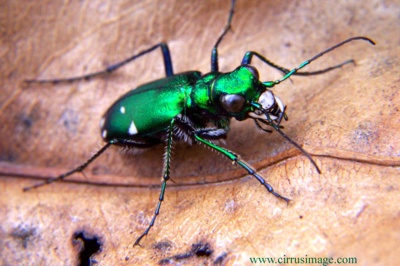 As I already mentioned in a previous list, the word “tiger” comes from tigris, which means “arrow” in ancient Persian. The big, striped cat was so called because of it’s (back then) legendary attack speed. Nowadays, the cheetah is much more famous when it comes to speed, and the tiger is better known for its huge strength and ferocity.

The Tiger Beetle, on the other hand, was named because of its ferocity and predatory habits… but its most remarkable trait is it’s speed!
Some Tiger Beetle species can run at speeds of around 8 kms p/h. If we humans could run as fast as they do, proportionally to our body size, we would reach speeds of almost 500 kms p/h! This speed is so extreme, that the tiger beetle can’t even see well when it runs full speed, and must stop often to allow its eyes to pick up clear images of its prey and surroundings.

These voracious predators feed on whatever insect or arachnid they can catch, even those bigger than themselves; even their larvae are fearsome hunters, although they prefer to stay motionless, buried in the ground, and ambush any small creature that passes by.
An interesting bonus fact; there is a genus of Tiger Beetles named Manticora, which is the name of the mythical creature inspired by the actual tiger in ancient times! 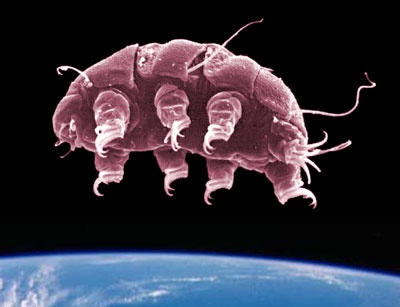 Easily one of the most amazing creatures in the entire world, the Water Bear, technically known as a Tardigrade, gets it’s common name from its resemblance to a miniature bear; indeed, it has a chubby body, short, stout limbs and hooked claws very reminiscent of those of a bear. Their movements are also said to resemble those of a bear.

Of course, it is not related to mammals (it belongs to a little known group of invertebrates), and the largest species measure only 1.5 mm when fully grown. Depending on the species, Water Bears can feed on diverse things from bacteria, to other small animals and vegetable matter. Water bears are found all around the world, in all kinds of habitats; rain forests, swamps, deserts, polar regions, mountains and oceans; as long as there is some moisture, water bears can survive anywhere. And if there isn’t any moisture, they can remain in a dormant state for many years, waiting for better times.

And that’s not all; they have been proved to survive extreme radiation, heat, freezing temperatures, etc. Perhaps the most amazing evidence of their hardiness is the fact that, during an experiment, several Water Bears were exposed to the vacuum of space and not only did they survive, but also bred while in orbit and returned to Earth alive and unharmed!

Makes me wonder… how many creatures as hardy as the Water Bear has Nature created elsewhere in the universe? How many of them are traveling in planet fragments right now? And how many of them will end up in new worlds, adapt and perhaps give rise to new and amazing species we can only dream of? 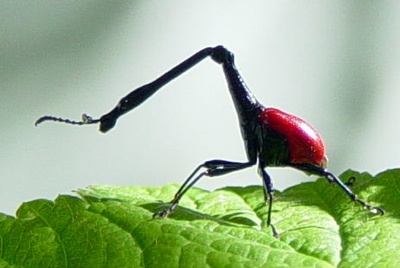 Found in the forests of Madagascar, the Giraffe Weevil is so named because of its long “neck”, which is much longer in males than in females.
At 3 inches long, it is among the largest weevils in the world, and it feeds on plant matter such as leaves and seeds. Males use their long neck as an assisting tool for building a “nest”. The nest is really a leaf folded to form a tube, and the male then leads the female to it so that she lays one single egg inside the tube.

Weevils are really a kind of beetle, belonging to order Coleoptera. Beetles are the most diverse animals in the world, with as many as 350.000 species described thus far, and many, many more to be yet discovered. Unfortunately, scientists say, many of them will probably go extinct before we even get to see them for the first time.