Shoes date back to the 8,000s BC – a very long history, indeed. Over the millennia all manner of styles and materials have been used for shoes. Some successful (the modern athletic shoe) and some not successful at all (lotus shoes). This list looks at ten bizarre styles of shoe from early to modern history. 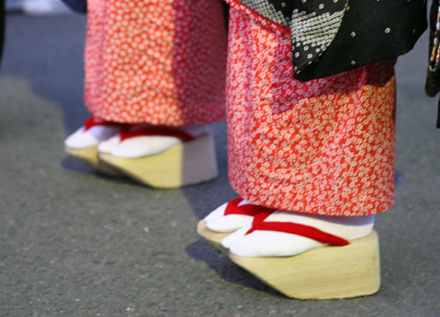 Long before the 1970’s and the platform shoes, Japanese maiko (apprentice geisha) had been wearing Okobo sandals or clogs. The reason for wearing these very high platform shoes was not solely for fashion, but also for very practical reasons. If you are wearing a very expensive kimono that hangs all the way to your feet, you do not want to get mud on it when you walk outside. Okobo are made of one piece of solid wood forming the sole. Usually the wood has a very natural finish, or no varnish at all. But during the summer, maiko will wear black lacquered Okobo. The hight of Okobo shoes generally measures at 5 1/2 inches (14 cm), and the wood sole is carved hollow, giving them a very distinctive sound when one walks in them. In fact, the word Okobo is an onomatopoeia, that is it represents the sound of walking in them. A V-shaped thong of cloth forms the upper part of the sandal. The color of the cloth depends on the status of the maiko. For instance, a new maiko will wear red, while one who has nearly finished her apprenticeship will wear yellow. 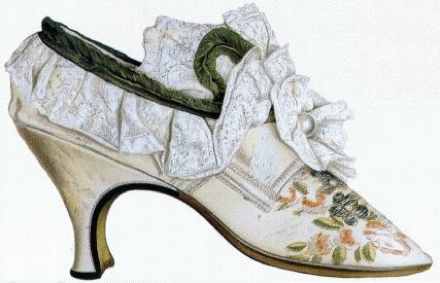 Shoes and stockings became very important for men in the 1700’s, when the tailored coat and breeches came into fashion and the focus shifted to the lower body. Suddenly, it was all about the shapely legs, and men wanted to wear flattering, fanciful hose and shoes to accentuate them. Louis XIV also had a thing for high heels with red soles and heels. It must have been tough being short in stature but lofty in power, so I guess he thought he would even it up a bit. Of course, what the king does, everyone else copies, so everyone who was anyone wore high heels with red soles and heels. After all, what would be more proper to wear with Petticoat breeches, than high-heeled shoes? Boots went completely out of style in favor of these new elegant heels, now elaborately decorated with ribbons, rosettes or buckles. 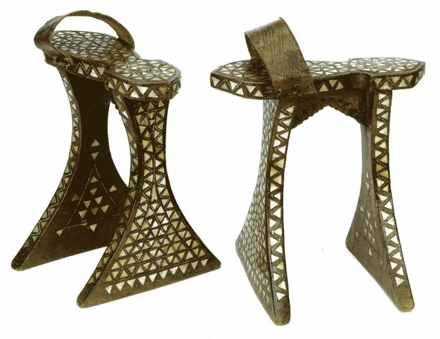 Silver studded Wooden stilts known as “kabkabs” or “nalins” were once a practical way for women in the Middle East to protect themselves from dirt and discomfort on wet, muddy streets and in hot, wet bathhouses. Those belonging to the wealthy were often richly inlaid with mother of pearl. They were several inches high and had embroidered leather, silk or velvet straps. The name “kabkab” is derived from the sound they make when walking on marble floors. The uppers were embroidered with silver, gold or pewter wire. For special occasions, like a wedding, the wooden stilts were entirely covered with intricately decorated silver, or with small silver ornaments. Many times brides were very young girls and, therefore, small in stature. To compensate this, bridal kabkabs were sometimes made as high as two feet. Socially, kabkabs were only worn by women. In bathhouses, however, simple ones, sometimes with a little carving only and a leather-strap upper, were also worn by men. 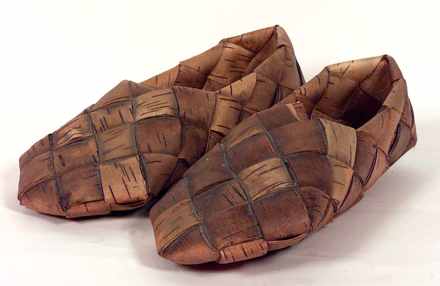 In the early part of the 20th century, women wore bark shoes daily, with cloth foot wrap inserts. They were also used as overshoes to protect more costly leather shoes against rain, mud and snow. These shoes were commonly made from Birch bark, but they could also be made from linden or lime-tree bark. Norway, Sweden and even Russia have all had their own version of the footwear. The lifespan of bark shoes is limited to about one week. 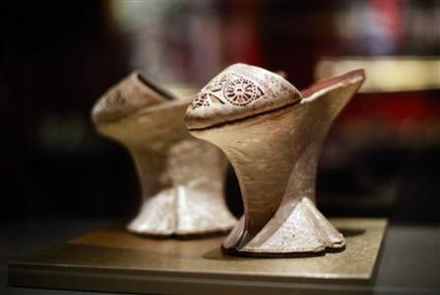 Today, only a very small number of museums have examples of original chopines. The debut of these shoes was during the renaissance, but they were still the shoe of choice for many Italian women at the beginning of the 17th century. Like the Japanese Okobo, Chopines were highly impractical, their primary purpose was to make the wearer stand out. They not only heightened the wearer by up to 18 cm (5 inches) but were extremely extravagant and expensive.

These treasured shoes were made of wood, and either covered with fine silk or velvet. They were embellished with silver lace, tacks, and were finished with a silk tassel. The tragic twist to these coveted shoes is that chopines were rarely ever visible, even in paintings from the period, since women always wore long dresses that covered their footwear. 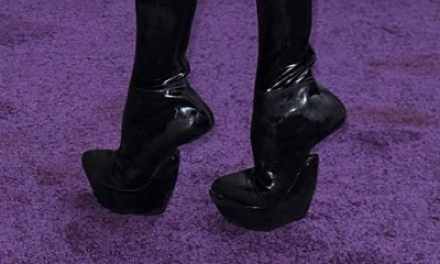 I decided to put a couple of modern shoe designs here too, as they are just too bizarre to miss. Heelless shoes made their debut on Antonio Berardi’s runway in 2007, and were made famous by Victoria Beckham in 2008. And despite their unnatural and extremely uncomfortable look, according to their English Italian designer, they do not cause the wearer any pain. He has said “They are perfectly balanced. When the girls come for fittings, they look a bit daunted, but by the end they say it’s just like wearing a regular shoe.” But medical experts have their concerns, saying that the shoes could lead to permanent damage to the feet, knees and spine if worn regularly. 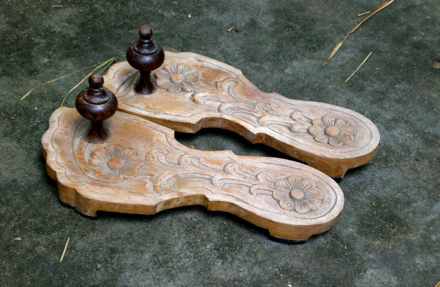 Ceremonial padukas, or toe-knob sandals, is the name of India’s oldest, and ultimate footwear. They were little more than a sole with a post and knob, which was situated between the big toe and second toe. They were commonly made from silver, wood, iron or even ivory. There is even a Spiked Paduka used for masochism. Masochism is for obtaining gratification or sexual arousal by having pain inflicted upon oneself. Some masochists enjoy a form of aichmophilia (the love of needles and spikes). Once pain has been registered for 20-40 minutes, the body will begin to produce opiate-like chemicals to reduce pain sensation. The release of these chemicals causes anesthetic, euphoric and trancelike qualities that allegedly enhance sexual sensitivity or experience. Spiked padukas sandals are worn by Indian Hindu Sadhus, or Holy Men, for this very purpose. 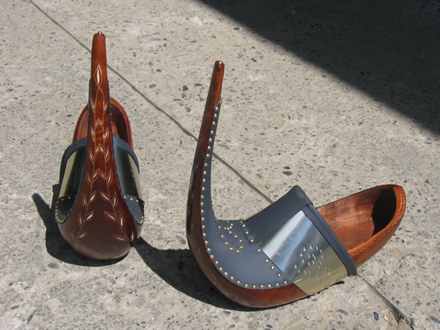 Out of the Bethmale Valley, south of the city Saint Girons in the Ariege district, comes this high pointed bridal wooden shoe. They go back as far as the 9th century, when local villagers conquered a camp of Moorish invaders, who kidnapped the village women, and pricked the hearts of their enemy on the pointed tips of their clogs, in celebration of their victory. The clogs were made in one piece of the trunks of walnut trees which formed a rectangle with its roots. Later the branches of a tree were pulled and warped in a special way to pre-shape the tree for making this type of clogs. Village men created the clogs for their future brides. It is said that the higher the point, the greater his love for her. 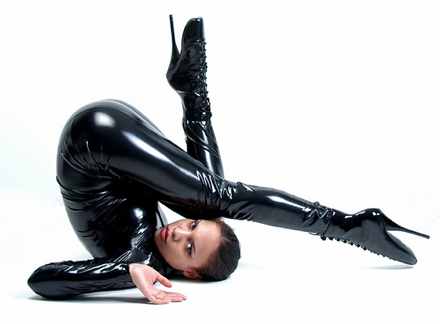 The ballet boot is a contemporary style of footwear. They started as a fetish shoe, but have grown in popularity as a general fashion statement, particularly in Japan. This shoe merges the look of the traditional ballet slipper with the ultimate high heel. The illusion is to force the wearers feet almost en pointe, like those of a ballerina using an ultra long heel. The Ballet Boot originally gained popularity in the 1980’s, and is now available worldwide through specialty stores and online. You may have guessed, but these shoes are not intended to be worn for any extended period of time. The shoes (based on the images one finds on google images) seem to be rather popular with fetishists. 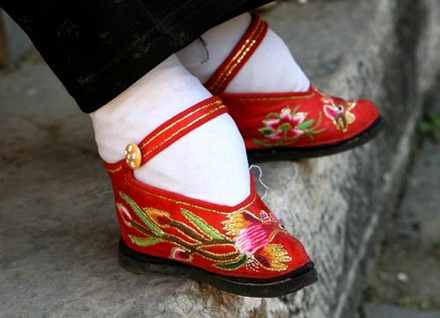 The Han Chinese tradition of binding women’s feet to make them appear as small as a lotus bud lasted well over a thousand years. Shoes from the north, especially Beijing, had a ‘bow’ shape, an exaggerated curved sole and heel in one piece, often with leather reinforcements at toe and heel. Style conscious women from Shanghai in the late 19th century and early 20th century, (then the fashion capital of China), liked a multiple heel, while those from the southern provinces such as Guangdong wore shoes often made of black cotton or silk, with a fairly flat heel. Iron or wooden studs were added in some cases to the soles to raise and protect the embroidered silk shoe from the dirt of the streets.

As part of her dowry, a woman would make several pairs of shoes as proof of her needlework ability, as well as her small feet. After her wedding, a bride gave each of her main female in-laws a pair of shoes at a special ceremony known as “dividing the shoes.” The last shoe factory to stop mass production of lotus shoes was the Zhiqiang Shoe Factory. The factory added lotus shoes for old Chinese women who still had bound feet to it’s product range in 1991. In the first two years, more than 2,000 pairs of shoes were sold annually. It announced in 2009 that it will make the shoes only on a special-order basis. 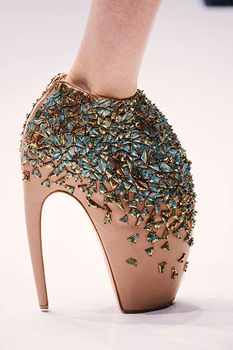 Alexander McQueen in 2010 released a set of armadillo shoes. They were then popularized by the likes of “Lady” Gaga, and other celebrities, who are not too worried about looking utterly ridiculous in public. The shoes above were the originals – many other styles have since followed. My advice to any real ladies reading this list – don’t buy these awful shoes!