Hollywood loves a good romance. What it loves even more is the destruction of a good romance. There are plenty of cinematic love stories that end before the final credits roll. These are the ten most beautifully romantic and, ultimately, tragic on-screen relationships. 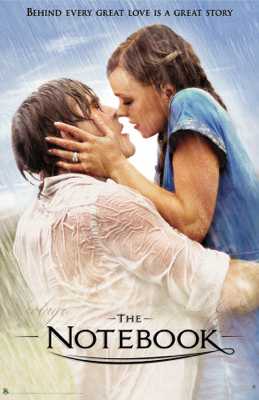 This saccharine World War 2 romance, beloved of teen girls of the 21st century, stars Ryan Gosling and Rachel McAdams as a young couple from different social classes who meet in the midst of global warfare. Inevitably, they are torn apart by circumstance and the film is narrated by their regretful elder selves. 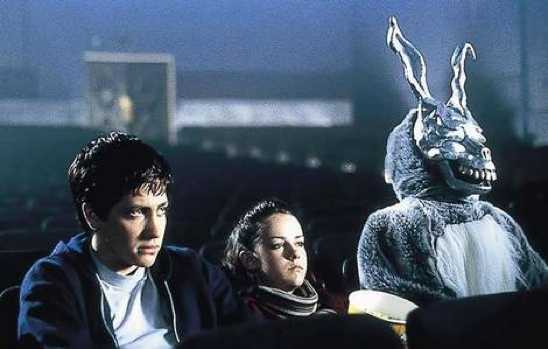 Dying for someone you love is a classic Hollywood act of romance. Erasing yourself from existence from just before the moment you met the one you loved is an even grander gesture. Donnie Darko (Jake Gyllenhaal) stars as a disturbed teen convinced by a guy in a rabbit costume that the world is about to end. The labyrinthine plot of this bizarre, but brilliant, high school time travel movie hinges upon the sweet but doomed teenage romance between Donnie and new girl in town, Gretchen (Jena Malone). 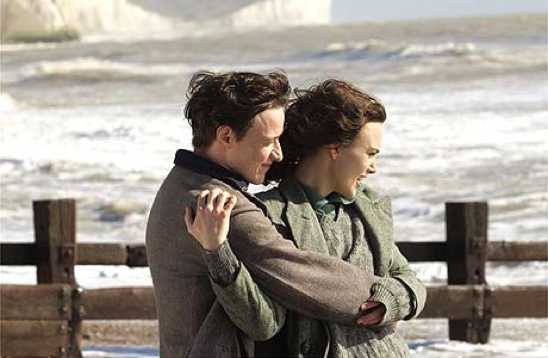 This tragic tale begins just prior to the outbreak of the Second World War. It stars James McAvoy as Robbie, who is courting Celia (Keira Knightley) but is falsely accused of raping her sister. The accusation tears the couple apart and results in Robbie being sent to prison. Cecilia’s sister (Saoirse Ronan) eventually admits to falsely accusing Robbie of the rape of their third sister, Lola (Juno Temple), though the admission comes half a century too late to save Robbie and Cecilia’s doomed romance. 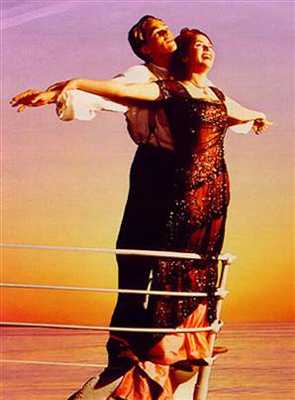 The most successful film of all time, until director James Cameron broke his own record with Avatar, this three hour epic tells the tale of Irish artist Jack (Leonardo DiCaprio) and English upper class girl Rose (Kate Winslet). They meet aboard the doomed HMS Titanic and fall in love. Naturally, this being set aboard the infamously ‘unsinkable’ Titanic, neither their love nor their trans-Atlantic voyage is destined to last. 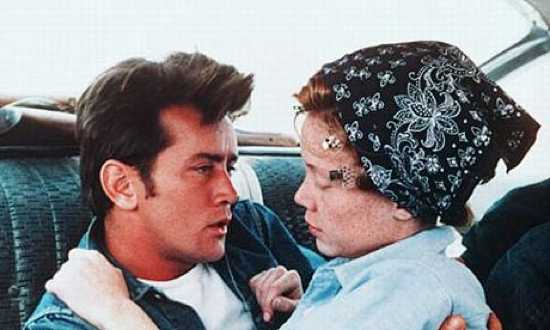 This dark film focuses on a couple, Kit (Martin Sheen) and Holly (Sissy Spacek), who travel across America on a kill-crazy rampage. It’s loosely based on the real-life Clark Starkweather and Carol Ann Fugate, who engaged in a similar nationwide killing spree. Though their actions make Bonnie and Clyde look tame, Kit and Holly’s love for each other is obvious in this warped romantic classic. 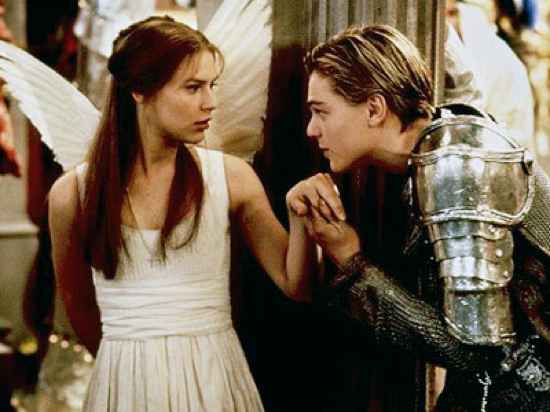 William Shakespeare’s world-renowned play about two star-crossed lovers from feuding families has, unsurprisingly, been the basis for dozens of movies. While most directors opted to recreate the 16th century Verona setting of the original play, in 1996, Baz Lurhman made the bold decision to move the action to Verona Beach, a fictional city formed from fragments of L.A., Miami and Mexico City. Lurhman wisely kept Shakespeare’s original dialogue to create a visually stunning re-telling of the ultimate doomed romance, with Claire Danes playing Juliet and Leonardo DiCaprio as Romeo. 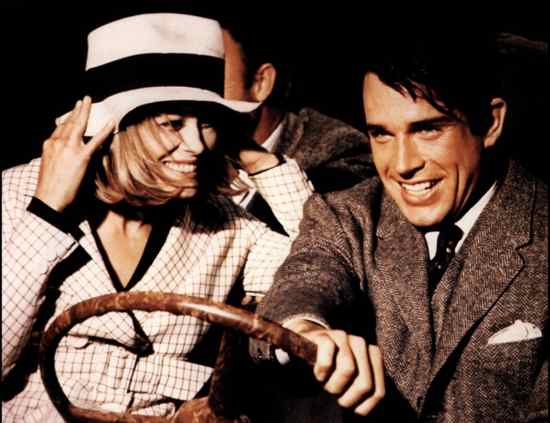 Bonnie and Clyde is based on the real-life bank robbing lovers of the title, who gripped American imaginations with their antics during the Great Depression. This film featured envelope-pushing levels of sex and violence that caused quite a stir on its release. Warren Beatty and Faye Dunaway’s charismatic performances as the titular couple build plenty of sympathy prior to the film’s brutal and tragic final scene. 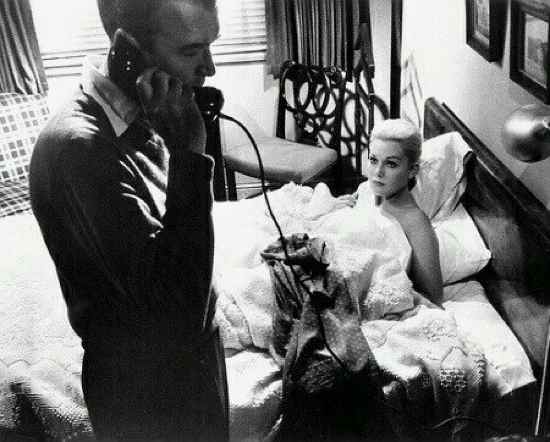 Alfred Hitchcock was the cinematic master of taut mental manipulation, and Vertigo is his most chilling and haunting film. James Stewart stars as Scottie, a police officer who develops a severe fear of heights after witnessing his friend and partner fall from a rooftop to his death. Scottie’s mental anguish only grows when his fear of heights prevents him from saving the life of his friend’s wife, Madeleine (Kim Novak). The film grows even more chilling as Scottie develops a dangerous and bizarre obsession with Judy Barton (also Novak), a woman he tries to mould into Madeleine’s image. 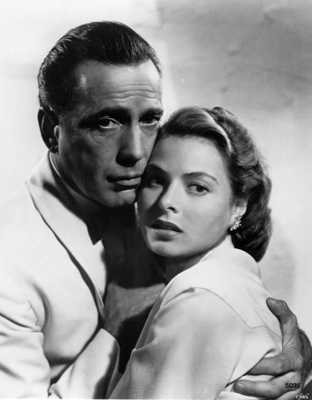 Rush-released to coincide with the Allied invasion of the titular Moroccan capital, this World War 2 classic stars Humphrey Bogart as Rick Blaine, a man torn between his attraction to the beautiful Isla (Ingrid Bergman) and his desire to help her resistance fighter husband escape Casablanca to continue his fight against the Nazis. With the beauty of Morocco, and the ugliness of global warfare as its backdrop, Casablanca has proved one of the most iconic romances ever committed to celluloid.

1
Gone with the Wind
Scarlett O’Hara and Rhett Butler 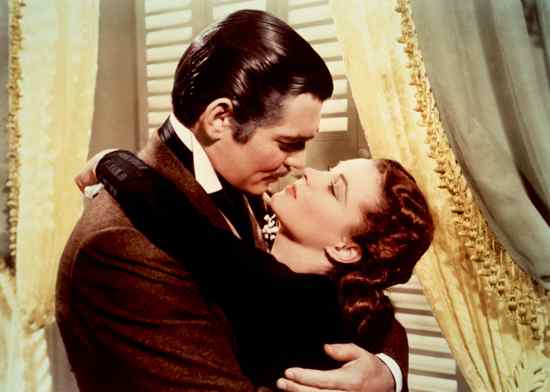 This Civil War epic takes its plot from a novel that many considered un-filmable. Filming it did, indeed, prove difficult, with the producers tearing through a number of directors and screenwriters to get the film made. Despite this, Gone with the Wind blew audiences away and has become a much-loved classic. The success of the film largely hinges upon the bristling, explosive relationship between Scarlett (Vivien Leigh) and Rhett (Clark Gable). These two icons of American cinema battle and smolder across almost four hours of film, all building towards the infamously heartbreaking moment when Rhett tells Scarlett that, frankly, he couldn’t give a damn.