The Germanic tribes during the Roman Empire have been, more or less, categorized into the much more well-known groups (Goths, Vandals, etc.) who did manage to burn and sack Rome. The truth is that these “barbarians” were much more diverse and varied; their existence was more fluid than what the textbooks usually tell us. This list offers a glimpse of a few of the lesser-known Germanic tribes, listed as a footnote to the greater and more glorified barbarians that helped push Europe to the middle Ages. 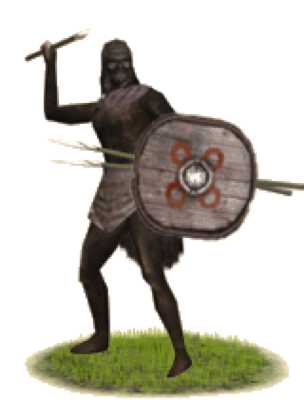 This tribe has only been mentioned in passing by Tacitus, in his work De Germania. The tribe’s name came from the Proto-Germanic word harjaz, which means “warrior.” True enough, the warriors of this tribe have earned their name, not only from their superior strength, but also from tactics. These warriors had been known to paint themselves and their shields black, and attack during the night, when their enemies least expect it.

Modern scholars have connected this tribe to the Viking’s Odin-related practices and beliefs: “Einherjar” (warriors who died during battle and thus will fight in Ragnarök), the Wild Hunt and the berserkers, through etymology.

The Harii have no known descendants. The tribe had probably merged with larger neighboring tribes. 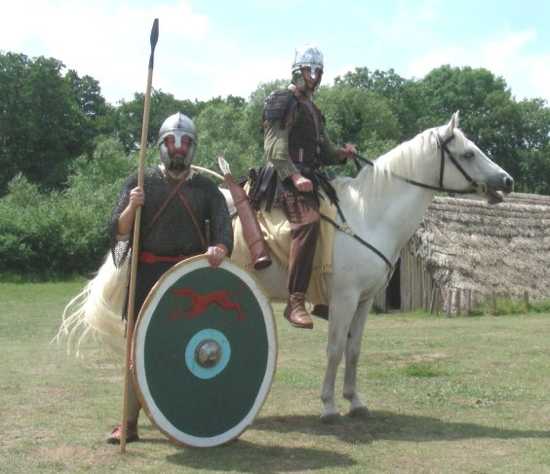 The Batavi got their name from the Germanic word batawjo, meaning “good island,” the place where they had settled. This place is now the modern-day Betuwe, in the Netherlands, at the Rhine river delta.

The Batavi used to be a part of a much larger tribe, the Chatti, but they separated after a dispute. Since then, they have been a Roman ally, supplying the empire only with men during war. A Roman military unit had been named after them.

Later on, the tribe revolted against Rome after one of their high-ranking commanders had been executed for false charges. They had been crushed by the Romans.

By mid-4th century, their land was overrun by Salii refugees (a tribe that would soon be a part of the Franks). They were either integrated into the Salii tribe, or were forced to go south, to Toxicandria, in modern-day Brabant and Flanders.

In the 16th century, the Dutch nationalists used the tribe’s identity as a suitable origin myth during their struggle for independence from Spain. However, the Batavi is only one of the many ancestral tribes of the Dutch people.

The Dutch colonial capital in Java, Batavia (now renamed Jakarta), was named after the tribe. 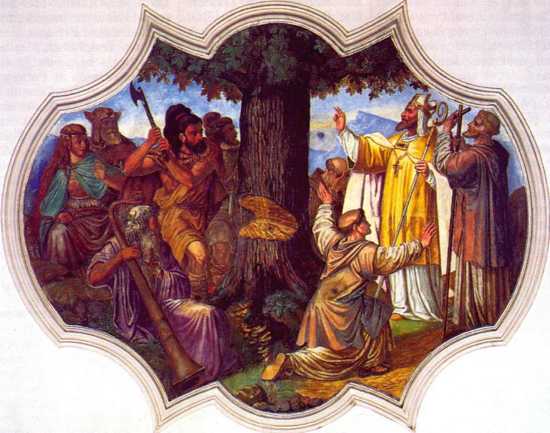 I have already mentioned this group in the previous entry as the main tribe where the Batavi belonged. They were located on upper Weser River, in modern Hesse, Germany.

According to Tacitus, the men of this tribe differed from other tribes in warfare and culture. He described them as disciplined warriors who carried trenching tools and provisions during war. They were also known for their warrior vows: the young men, upon entering manhood, would let their hair and beards grow until they had killed their first enemy; braver men would wear an iron ring, a sign of disgrace, until they have vanquished their enemy.

The Chatti joined the Cherusci against Varus’s three legions in the Battle of the Teutoburg Forest. In retaliation, the Romans, under Germanicus, razed their capital city, Mattium. The Chatti had been absorbed by the Franks during the Migration Period.

In 723 AD, the sacred Donar oak of the Chatti had been cut down by St. Boniface.

Hessians were the supposed descendants of the Chatti. 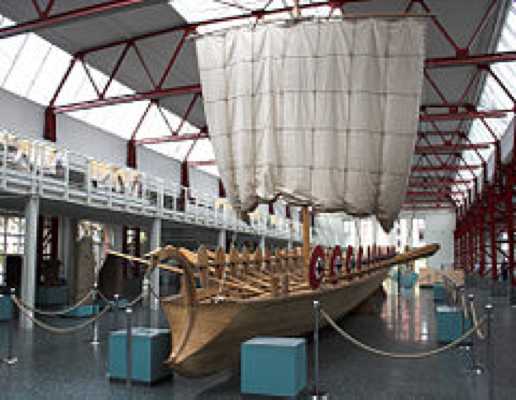 Located at the low-lying region along the coast of the Netherlands, west of the Elbe estuary, the Chauci were related to Anglos, Saxons and Frisians. Tacitus described them as peaceful people; in contradiction to this statement, Pliny said they were “wretched natives.” This was one of the few times when Tacitus was wrong.

The coastal Chauci had been known for sea-raiding. They were probably the forerunner of the medieval Viking and Anglo-Saxon sea raids. In 47 AD, the Chauci, led by Gannascus, carried out a sea raid along the coasts of Belgium and Northern France. They were defeated by the Roman fleet. However, this did not deter them from continuing their sea-raids. They terrorized both sides of the English Channel, prompting the Romans to fortify their northern coasts.

They were later replaced by the Saxons in their sea activities, and gradually, they merged together. 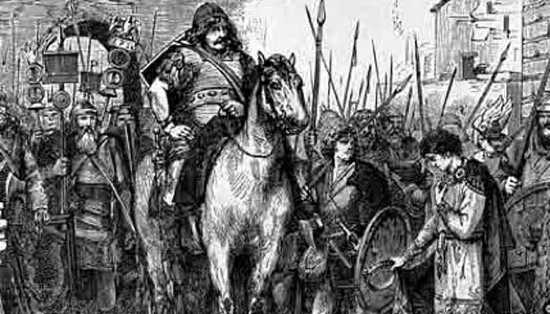 Originally from the Danish isles and South Sweden, the Heruli had split into two when they migrated south to the Balkans and the present-day Ukraine. The western branch practiced raiding alongside the Saxons and other tribes, into which they gradually merged with. The eastern Heruli joined forces with the Goths in raiding the Black Sea and Aegean. With their combined forces, they were able to attack Byzantium and sack Athens.

The Heruli were successively subjugated by the Ostrogoths and Huns, before being able to establish a realm of their own. The Lombards destroyed their kingdom later on. The remaining Heruli joined the Lombards in establishing a kingdom in Italy.

Procopius noted that they were practicing pederasty. They were also said to let themselves be stabbed rather than die of disease and old age: a practice that will be seen later in Vikings. They served in the Byzantine armies, especially during Belisarius’s campaign to regain the Western Roman Empire.

The Anglo-Saxon word “eorlas” (nobles) and Old Saxon “erilaz” (man), which were found in runic inscriptions as an honorific title, have been linguistically connected to the Heruli. 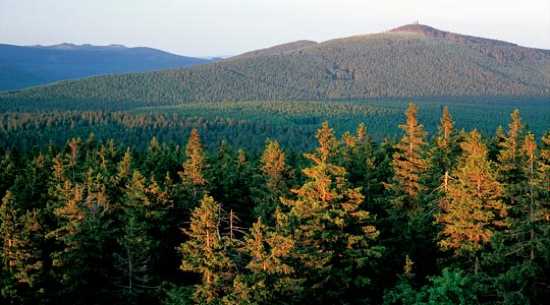 It is still a subject of speculation about the origin of the Thuringii. They may have been the remnants of the Alemannic confederation, descendants of an earlier tribe, a confederation of smaller tribes or just another lesser tribe. They inhabited the Harz Mountains in central Germany. A faction of the tribe was able to cross the Rhine and settle in modern Kempen, Belgium.

The Thuringii had been conquered by the Huns in 430 AD. After the collapse of the Hunnic kingdom, they established a kingdom in what is now Thuringia. Their kingdom was successively annexed by the Franks and Saxons to their rule.

The Thuringii were known to be excellent horsemen due to their proximity, relationship and inter-marriages with the steppe peoples, particularly with the Huns. Archeological evidence suggests that they have either kept Hunnic women as slaves or have married them. Female skulls found in Thuringii graves were discovered to have been artificially elongated, a peculiar practice among the Huns. 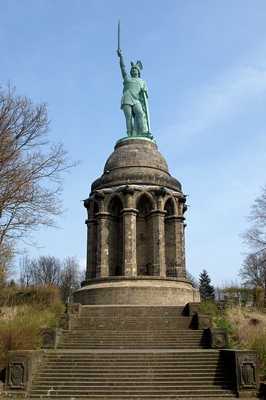 One of the early Germanic allies of the Romans was the Cherusci, “swordsmen.” They were situated in the northern Rhine valley in the present day Hanover. They have been subjugated during the time of Augustus Caesar.

The Cherusci’s most famous son is Arminius (Hermann), a hostage prince, bred and trained as a Roman, and then rose to the ranks of the Romans. He unified several Germanic tribes, and won the battle against Quinctilius Varus’s three ill-fated legions in the Teutoburg Forest. However, the unified tribes were defeated by the subsequent Roman retaliation. Because of this event, the Romans abandoned their plans to extend their boundary beyond the river Rhine.

Long after that, the Cherusci once again became Roman allies, and then absorbed by the Franks, Saxons and Lombards.

Arminius has been used as a material for propaganda in German nationalism during the 19th century. A huge monument was built on a hill in the Teutoburg Forest, as a symbol for freedom, independence and unity. 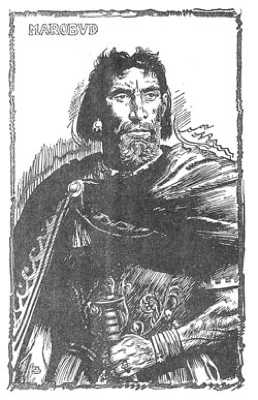 Named after their location, the Marcomanni or “march (boundary) men” lived in the northern boundary of the Roman Empire, the present day Germany, Czech Republic and Austria. Their king, Marboduus, established their kingdom in Bohemia to escape the Roman rule. Their territory lay in a “market zone” where Germanic tribes can freely trade with the Romans.

Forced by the movements of the Goths from the north, they – along with the Suebi, Quadi and Sarmatians – tried to breach the imperial borders. This led to two wars against Rome during the reign of Marcus Aurelius and Commodus. The Romans were victorious, as usual, but its army was weakened. These Marcomannic Wars finally established the Danube River as the northern border of the empire.

Along with the Suebi and Quadi, the Marcomanni crossed the frozen Rhine in 406 AD. Those who remained were subdued by the Huns. They were purported to be the ancestors of the modern Bavarians. 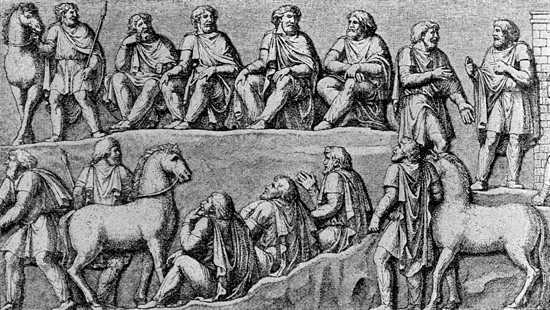 One of the terms used by the Romans to simplify all the German tribes into one name is Alamanni, or Alemanni. The term means “all men.” The Alemanni was a confederation of various tribes on the upper Rhine Valley. Later on they became a tribe on its own, identities of the smaller tribes within it gone and forgotten.

They were first encountered when Emperor Caracalla subdued them, adding “Alamannicus” to his name. Over the course of years, they tried to cross the Rhine, but were successful only once. Once settled in the other side of the Rhine, particularly in Alsace and northern Switzerland, they started ravaging the lands. They were often described by the Christian writers as savage and brutal compared to the Franks. After the fall of Rome, the Franks annexed their kingdom to their own.

The Alamanni gave the Romance language a name to Germany (Allemande, Alemania, etc.) However, within Germany, Alemannia is only a specific area, particular to those who speak Alemannic German: Bavarian Swabia, Baden-Württemberg, Alsace, Liechtenstein and Switzerland.

Before the Alamanni became the stereotypical name for any Germanic tribesman, there was the Suebi; the meaning of which is “one’s own (people).” They were originally from the Baltic coast before migrating southwards via the Elbe River and settling at middle Elbe. Tribes who shared the same culture with the Suebi were encompassed by that name. These tribes include the Marcomanni, Lombards, Harii, and Semnones, the spiritual center and core tribe.

The Suebi were identified by their peculiar hairstyle, the Suebian knot. It was a mark of a freeborn. As the Suebic influence spread, other tribes imitated the hairstyle. Soon, the Romans began depicting the Germanic tribes with that particular knot.

The Suebi, underwent several migrations. One group led by Ariovistus reached the bank of the Rhine, where they were repelled by Julius Caesar. Another group occupied the middle of Danube, where they associated with the sub-tribes Marcomanni and Quadi. In 406 AD, the Suebi made their final exodus by crossing the Rhine, into Gaul, and into Galicia. There, along with Vandals and Alans, they established a kingdom, which lasted for about 200 years.

The Suebi who did not cross the Rhine established their own kingdom, which would later become the Duchy of Swabia. The remnants of the original Suebi/Semnones in the Elbe became known as Nordschwaben, dwelling in Schwabengau in Saxony-Anhalt. Both Suebi branches would fall under the Frankish kingdoms.