Two heads are better than one – these movies sure seem to think so. Twins have been an object of fascination and amusement since the beginning of humanity. There’s always been an air of intrigue around how twins function as two parts of one split zygote. Some say they even possess psychic abilities and can sense when the other is in danger. Only a twin knows the truth in this for sure, but what we do know is that twins usually mean double the pleasure, double the fun (“double the flavor with Double Mint gum”) at least where chewing gum and beer commercials depict. At any rate, no set of twins are alike; nor are they alike amongst themselves in spite of appearance or birthdays. Here are ten of the best doppelgängers to show up in film, and then show up again. 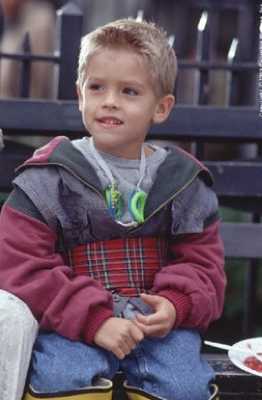 Not a movie about twins, but a boy played by a pair of twins who can now be seen in a bigger, teenager form on the Disney Channel as Zach and Cody. It begs the question why it takes two twins to play one character, considering the cost of one child actor, let alone the chance that a misplaced freckle might move around freely between scenes. The same question applies to why two Olsen twins needed to play one Michelle from Full House. Maybe the answer is sibling rivalry. Or so each has an equal opportunity to grow up completely screwed-up. 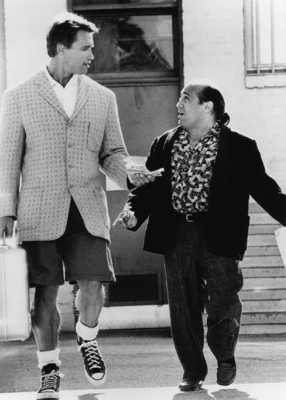 In this movie about unlikely twins, one being a gentler, smarter version of Mr. Universe. The other, Danny Devito, a border-line midget with an attitude. Therein lies the comedy of “twins” separated at birth who find each other and prove that not all twins have to be identical. Or share any ostensible DNA.

8
Girls from The Shining
“Come and play with us, Danny.” 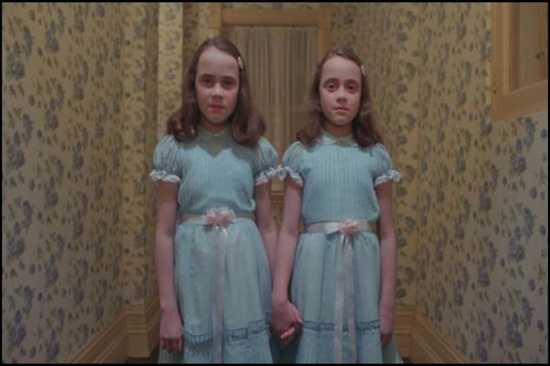 Seeing two girls, who were supposedly hacked up by their demented father, wearing the same blue dress speaking in an inseparable, flat-toned harmony is a perfect reason to high-tail it in a big wheel. This movie creates a chicken-and-egg scenario where it becomes uncertain whether twins make this movie so creepy, or does this movie make twins look creepy. Never again will a meiosis cycle instill so much fear. 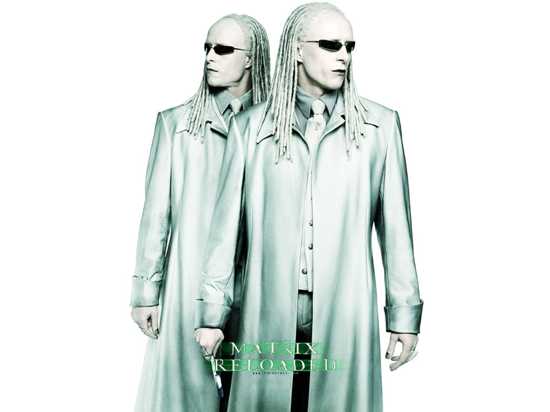 Albino with trench-coats and dread-locks to match, the twins from the first Matrix sequel make an interesting addition to the villain line-up. While Agent Smith can replicate himself, dodge bullets, and even enter the real world, the twins can turn translucent and float through objects like true ghosts. An unfortunate situation when dealing with a high speed car chase, obligatory or otherwise. They are played by real-life twins Neil and Adrian Rayment. 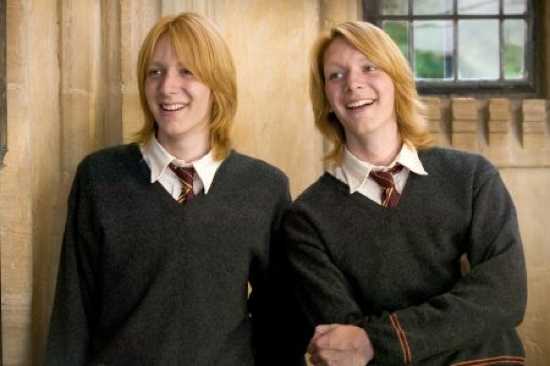 These devious red-headed Brits make for the Potter franchise’s best source of comic relief – then again the whole Weasley family seem to exist for that job. Played by James and Oliver Phelps, these doppel-gingers offer the slyness and elusive trouble-maker status which their cravenly brother lacks, spine notwithstanding. They specialize in pranks, even make their own magical joke paraphernalia, and often take the lead when a storyline calls for rebellion and/or tomfoolery.

5
Bob and Walt Tenor
Stuck on You 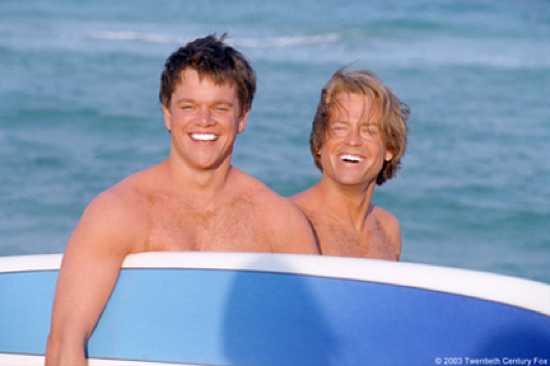 Siamese counts. Matt Damon and Greg Kinear play the literally inseparable brothers who act more like twins then they look. They are completely dynamic grill cooks at their Martha’s Vineyard burger joint, like acrobats with spatulas and ketchup dispensers. They also share a liver which punishes Damon’s character, who posses the smaller half, when Walt (Kinnear) feels like celebrating. Whatever body parts they do share, they split when it comes to personal interests: Walt is a gosh-golly sort of actor, Bob hyperventilates (as he is prone to panic attacks). Two halves of yin-yang are what this conjoined pair really are. 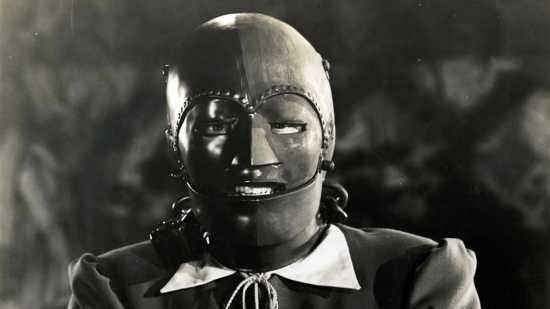 A remake of an older classic, this film casts heartthrob-era Leonardo DiCaprio as twins in polar opposite circumstance. One is a decadent, heartless king, while the other is locked cruelly in a dungeon within the eponymous iron mask, until he is freed by the Three Musketeers and replaced by the formerly fortunate former. This movie was a high point for DiCaprio who, in spite of his part in the wishy-washy romance-drenched Titanic, would go on to work with such greats as Martin Scorcese, Steven Spielberg, Sam Mendes and Christopher Nolan in the most substantial and enviable of lead roles. 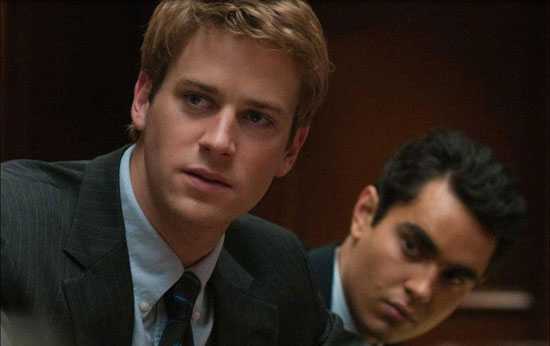 What’s better than one snobbish Harvard jock? A twin to mirror his cry-babying when Mark Zuckerberg runs away with his idea for a Social Network. The twins, actually played by one actor, Armie Hammer, play off each other fantastically as one cools down the other’s blowout. It’s fun to watch the two eat it in the movie, but more so in real life as they continually fail to win a suit against Zuckerberg for his Facebook. 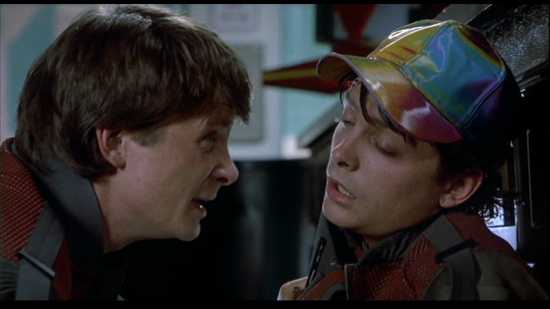 Michael J. Fox pulls an Eddie Murphy in the second Back to the Future as he plays the time-traveling teenager Marty McFly, Marty’s older, wrinkly future-self, and his future-son Marty Jr. The doppelgänger moment happens when he switches places with this cowardly, identical son to face future-Biff to whom he reassures “no one calls me chicken.” A lot of paradoxes happen, but comedy lies in how he tip-toes, or hover boards, around them without erasing his own existence. 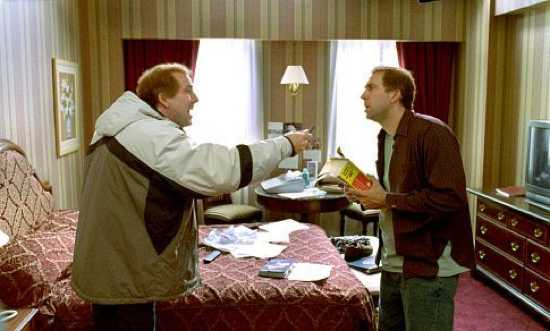 Number one doppelgänger award goes to Nic Cage in the last movie he ever made as an ACTOR. And as a quasi-brilliant one. He plays twins as genius screenwriter Charlie Kaufman (who actually wrote the movie’s screenplay) and his daft, yet confident brother Donald. What ensues is hilarious interplay between the two, a spectacle as one actor carries on a scene with himself. And he does this throughout the whole movie. Seeing as he really had his work cut out for him, you’d imagine that Cage got paid for double-time. Which is no rare feat for a man who cranks out a new movie seemingly every week.