The art of film holds a very special place in many of our hearts. Transporting us to unique and creative worlds that capture our attention and our imaginations. No film would be complete without a great set to further immerse its viewers in the setting that it’s trying to sell us. Most films are brought to life on a backlot, only to be torn apart after filming. What happens however, when the production wraps up on films that are shot on location? More often than not, these sets are only partially torn down, if they’re torn down at all. All over the world, relics of cinema past litter abandoned and remote areas, acting as relics of the movies and their crews that once inhabited the area years before. Here are ten movies sets that were left abandoned by their crews after filming wrapped up. 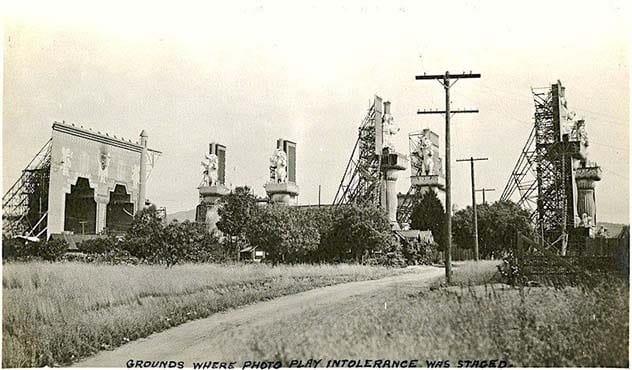 Back during the earliest days of Hollywood, no one really knew that movies would become anything more than a novelty, or if the medium would even stick. Due to this, there was a lot of experimental stuff going on. Cue W.D. Griffith who in 1916 decided to make a three and a half-hour long epic titled “Intolerance”. Griffith really tried to push the limits of filmmaking and even opted to put 1/3rd of the budget (Nearly 2 Million in today’s dollars.) towards creating a movie set of the ancient city of Babylon. This was constructed right off of Hollywood Boulevard and is an impressive set even to today’s standards. However, the film slowly turned into an ego trip for the director, who strived for perfectionism, and spent large sums of money on individual scenes really going for the visual aspect of the film. This caused for the film to become an absolute production nightmare, and after it’s release and lackluster reviews, nearly bankrupted Griffith. Due to this, the ancient Babylon set was left to rot right in the middle of downtown Hollywood as no one really wanted to dedicate the time or money into tearing it down. It sat this way for years, acting as a bizarre eyesore that anyone could just wander into until finally in 1922 it was razed by the city. The set still exists today in a different form. In 2001 a shopping mall opened near the original set, in which a semi-replica of the original set was constructed. While not complete, it features the stairs, some buildings, and a few statues in the exact scale of the originals that were torn down 80 years prior.[1]

9 The Ten Commandments: City of the Pharaoh 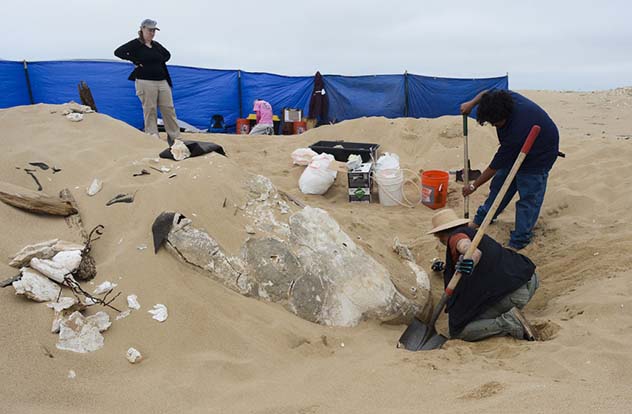 As was the style at the time, creating massive sets for your film was a no-brainer if you really wanted to wow people with visuals. In 1923 Cecil B. Demille did just that while constructing the “City of the Pharaoh” for his version of the “Ten Commandments. He constructed the set in the desert outside of the small town of Guadalupe, California. The set consisted of an 800 Ft. wide temple complete with twenty-one giant papier-mâché sphinxes lining the way to its entrance. It’s impressive size left the production team with the dilemma of cleaning up the set after filming, and transporting its pieces. DeMille instead hatched the idea to simply bury the entire thing right in the sand where it stood, and they did exactly that. The set sat for nearly 90 years in the desert until in a strange twist, archeologists decided to try to dig up its remnants. They discovered near-intact sphinxes as well as remnants of buildings and pottery all from the original sets of the movie, untouched for nearly a century.[2] 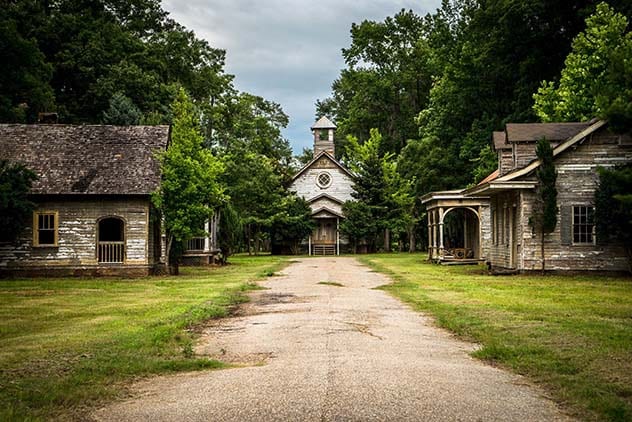 Tim Burton is well known for his love of pushing the boundaries of cinema with special effects. In his 2003 film “Big Fish” he opted to physically create the town of “Spectre” in which the main character visits multiple times throughout the movie. Built on an island in the middle of the Alabama river, the crew decided to leave the town after filming wrapped up. What remained was a dilapidating and sagging small town made of facades fake trees and rocks. Over time, the set began to fall apart, and a fire destroyed many of the buildings. However, today six of the buildings still exist as well as some remnants of the others, acting as a living testament to the movie that was shot there nearly two decades ago.[3] 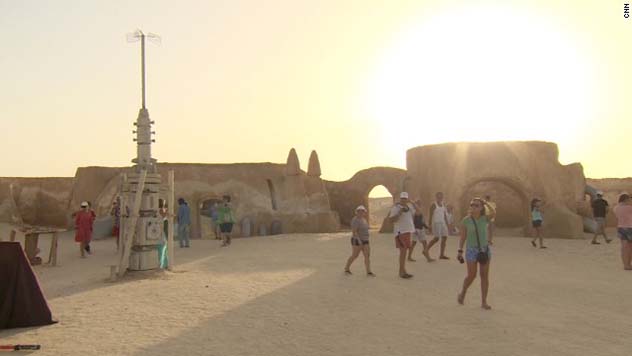 No one knew that Star Wars was going to be a hit when it first premiered in 1977. Not even George Lucas had too much faith in his own film. Regardless, much effort was put into trying to create the illusion of the exotic worlds featured in the film. The desert of Tunisia was chosen to be the location of the desert planet of Tatooine. Here, sets were constructed, and props were left. Including the exterior of Ben Kenobi’s home, and a skeleton of a fictional Krait Dragon. When cast and crew returned in the late 1990s to film the prequel film “The Phantom Menace” they were shocked to see that although locals had picked over these sets, they remained almost fully intact. The sets expanded as they created an entire village in order to make the “Mos Espa” set. This set still stands in full, a tourist attraction by the Tunisian government who realized it could be marketed as a pilgrimage site to any Star Wars fan wanting to bring themselves a bit closer to the film.[4]

6 The Good The Bad and The Ugly 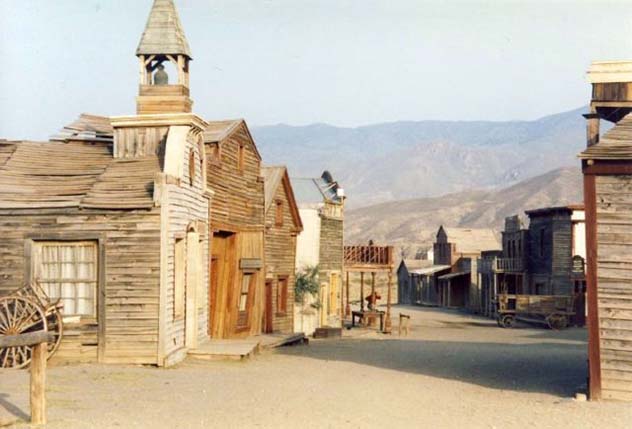 Regarded as the greatest western of all time, The Good The Bad and The Ugly is usually pretty high up on lists of people’s favorite movies. Primarily filmed in and around Almería, Spain many of the “Old West” style buildings were left on location, and used in various other “Spaghetti Westerns” as time went on. In 2014 restoration procedures began on the site of the “Sad Hill Cemetery” location of the film’s iconic final standoff. The cemetery had been constructed solely for the film, and fell apart after filming wrapped up. However, a near replica now exists on the exact site of the former set thanks to some dedicated film enthusiasts.[5] 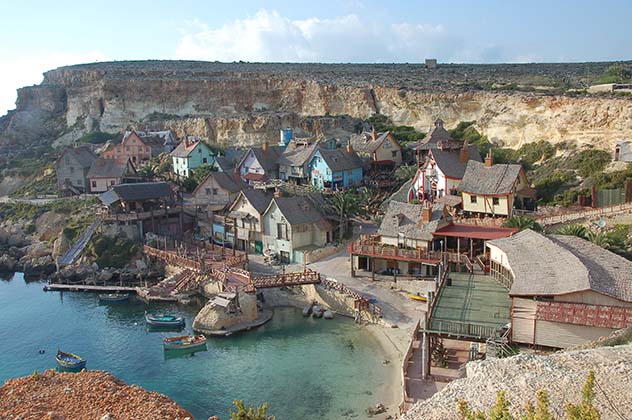 Some films are baffling that they ever got made. 1980’s Popeye, featuring a young Robin Williams, is one of these films. Even more baffling is that for such a bizarre film concept, they created an entire village complete with fully constructed buildings, in the island country of Malta. Such a large set would be very expensive to destroy and they instead opted to leave it there, with the government of Malta deciding to turn it into a tourist attraction. It’s still open to this day complete with its own website. I don’t know exactly who is going out of there way to visit the village featured in the old Popeye movie, but it does look like a neat little Mediterranean getaway regardless of its significance to cinema history.[6] 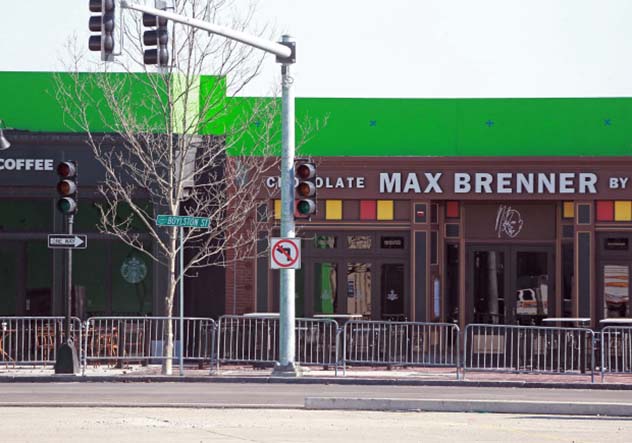 The 2016 Mark Wahlberg movie, Patriots day, features some exhilarating scenes recreating real life firefight between the Boston Police and the Boston Marathon Bombers. Shooting on location in actual urban Massachusetts would be not only extremely expensive, but also possibly harmful to the community as the actual tragedy had only taken place three years prior. Due to this, sets were constructed on the grounds of now defunct South Weymouth Naval Base. These sets were used to recreate the Marathon finish line on Boylston street as well as a residential street that was featured in the film’s climactic shootout. Although they were just facades of buildings, they still exist on site today, easily accessible for anyone who wants to check them out.[7] 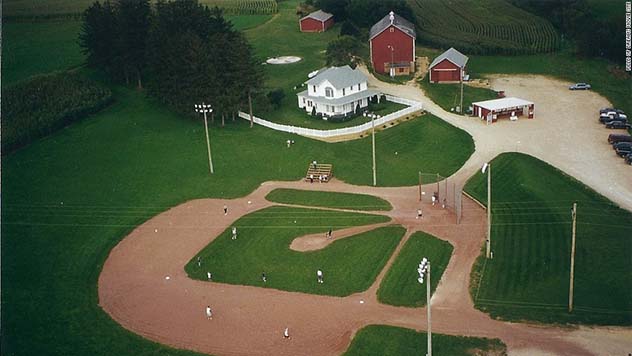 If you build it, they will come. That’s exactly what they did. Just as Ray constructed his own baseball field at the edge of a cornfield in the 1989 classic “Field of Dreams” so did the construction crew for the movie. Built in the small town of Dyersville, Iowa, this set consists of the baseball field itself, as well as the house of the film’s main character. Once all over the field and home were left there, and not unlike other locations on this list, quickly became a tourist attraction. Today you can visit the site, take a tour of the house, and occasionally watch a baseball game. In fact, Major League Baseball has even decided to have a game played on the site in 2020. Although it loses a bit of its novelty when you realize they’re constructing another additional field on the other side of the cornfield in which the teams will play, and not the actual set.[8] 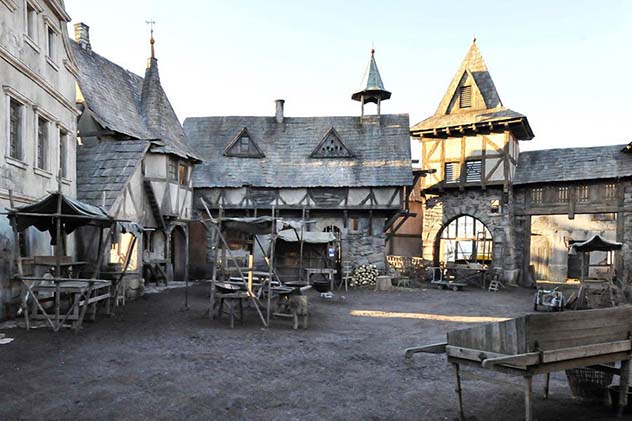 Despite this movie being a cliched, horribly written, and just all around awful movie, the creators of 2013’s Hansel and Gretel: Witch Hunters, opted to create a physical set for the movie’s town setting. Built in Augsburg, Germany right outside of Berlin the small and highly detailed medieval village was constructed and left to rot. Almost completely accessible to the public, the site remained as no one knew at the time whether or not the film would ever garner a sequel. Luckily for us, it never did.[9] 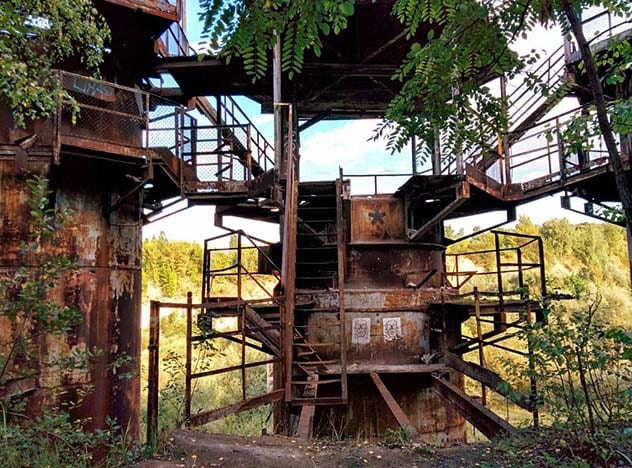 The most chilling and eerie set on this list. Spielberg aimed for brutal accuracy in his depiction of the Nazi concentration camp “Plazlow” in his 1993 historical drama Schindler’s list. The actual camp had been torn down years ago, and would’ve posed an ethical dilemma to film there, so instead Spielberg opted to build a replica in a nearby quarry in Poland complete with seven watchtowers, 34 barracks, and replica officer villas. Once filming wrapped up, they left the replica camp to rot in the old quarry. Although it’s just a movie set and nothing really happened there, doesn’t make it any less sobering and terrifying to visit due to the real life counterpart it represented. [10]

For more lists like this, check out 10 Crazy Theories About Popular Horror Movies, and 10 Medical Myths You Believe Because Of Movies.

About The Author: Dylan Hallett is a Journalism Student at the University of Maine with an interest in Sociology and Film. Twitter.