This list is about the flow arts, which is a group of performances revolving around that moment when body, mind and spirit is at one (when you are in the zone). This group of arts have emerged with a wide variety of tools, styles and rhythms, and include all fire spinning techniques. All fire spinning tools have Kevlar wicks, and need paraffin (lamp oil/kerosene) as fuel. Steel wool can be wrapped around any wick to create sparks that fly off and various elements added to your fuel can change the color of the flame. I have become totally addicted to the flow arts even though I have only been spinning poi for about four months. It is the first form of instant gratification that I have ever come across.

Every single time you spin, you will be better than the last, and that moment when you have been trying a trick for a while and then suddenly get it right for the first time is indescribable. It builds pathways in the brain and is amazing meditation, not to mention how addictive it is to hear the fire whooshing around your body. Regardless of how amazing it might sound, I would not advise anyone to spin or play with fire unless you have had some practice, and even then you should take care to protect your body and hair, and remember not to wear any plastic based clothes when spinning as it will result in severe burns. Definitely worth a try for anyone who wants to learn an amazing new skill.

10
Fire clubs or balls
for Juggling 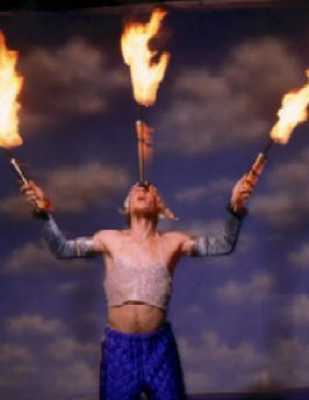 Juggling has been around for thousands of years. The first depictions where found in an ancient Egyptian tomb, with other depictions also found in Chinese, Indian, Greek, Roman, Norse, Aztec and Polynesian cultures. In the 1700s juggling was introduced to circuses, in which they are best known today. Through the evolution of juggling, jugglers have been using more and more dangerous instruments for shock value, but none compare to the beauty of fire juggling. Fire juggling balls are made from a round spiral of wire with a wick secured in the center of the ball. Fire clubs are similar to normal juggling clubs but with a wick at one end. With practice and a variety of different kinds of throws, beautiful patterns can be formed by the fire. 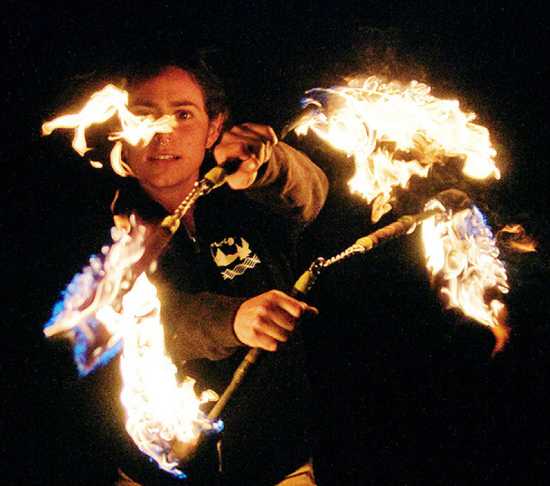 I am sure everyone has seen, owned or wanted nunchaku (nunchuks in the western world). These double short sticks attached by a chain have a variety of possible origins, all from the east. One theory is that they were originally used to flail (beat till the grains are separated from the husks) rice and soybeans, in a time when commoners were not permitted to carry formal weapons. When war broke out and everybody had to arm themselves, any common object became a weapon. Nunchuku have evolved into a form of contact martial arts since then, and are now also used in flow arts. By adding a wick at either end of the sticks, they are transformed into an amazing fire spinning tool, with a wide variety of possible moves. 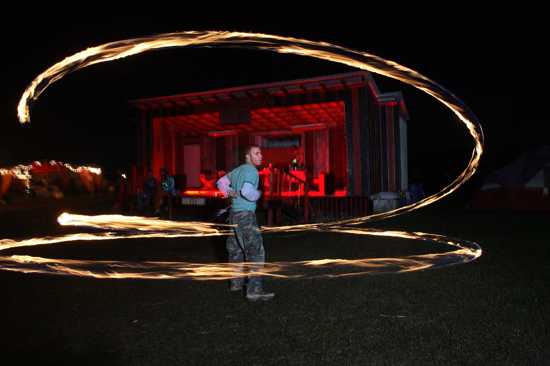 The rope dart or rope javelin is an ancient Chinese weapon that consists of a sharp dart attached to a chain and then to a long rope (2-3 meters). The dart could be thrown at an enemy and then pulled back to the wielder. It allowed for a variety of moves including spinning, throwing and whipping out towards enemies. In the modern flow arts, the dart is replaced with a wick and the rope is secured to the left hand, allowing the right hand to throw out and spin around the burning end. 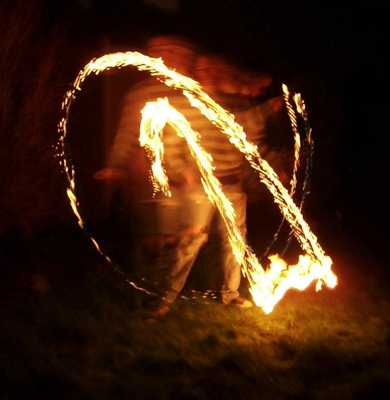 The diabolo, formerly known as the devil on two sticks, is an interesting and fun tool or toy. It consists of a spool which is perfectly weighted on either side with a thin contact point in the middle and a rope with a stick attached at either end. The spool can be run along, thrown and spun on the rope. The diabolo originated from the Chinese yo-yo and was standardized in the 12th century. Though normal diabolo are made from, rubber, plastic or a mix, fire diabolo are made from metal, with small wicks at the center of each cup. 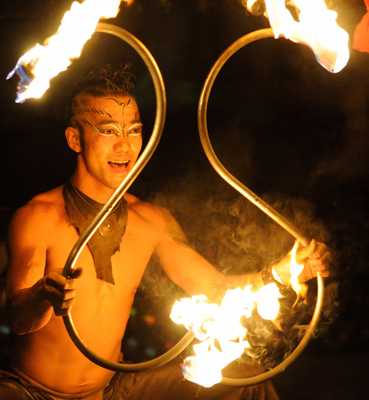 The Buugeng or S staff is an interestingly shaped fire staff. It generally consists of a staff, with a grip at the center and either side bent into opposing half circles. The term Buugeng, meaning martial arts illusion, was coined by Japanese performer Dai Zaobab, but he was not the inventor of this interesting instrument. The S staff was first used by Michael Moschen, a Cirque du Soleil juggler who also won the MacArthur Foundation genius grant. Moschen’s inspiration for the staff came from the Chinese martial arts’ double dear horn. This instrument requires more concentration and knowledge of planes than a straight staff, but the result is a beautiful visual Kaleidoscope or optical illusion. 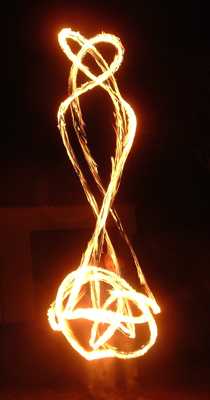 I am sure many of you are familiar with the devil sticks, which consists of three tools, used in unison. You have the baton and two control sticks, which are used to manipulate the baton stick. The Devil sticks have evolved over 3000 years, but the exact origins are unknown. When spinning fire devil sticks, only the batons’ ends have wicks. This can give the illusion of the baton floating around at night as one cannot see the control sticks. There are many patterns that can be created with the devil sticks and it can also become a team sport, where two or more people can pass around or juggle back and forth the baton. 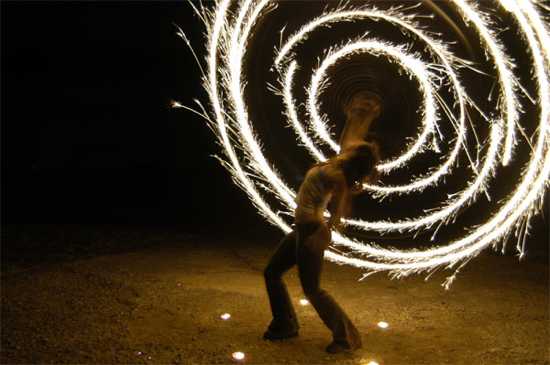 Hoops have been played and danced with for a thousand years. The first hoops where toys which were made from fines and pushed around with sticks or rotated around the body (hula hoops) but they have evolved into a great flow art movement. Fire hoops are generally made from aluminum, with wick spokes sticking out around it. Either one large hoop or two smaller hoops can be used and they are spun around and tossed to the beat of the music. In addition to looking amazing, spinning hoops also offer a great form of aerobic exercise and the possibility of movements can be endless. 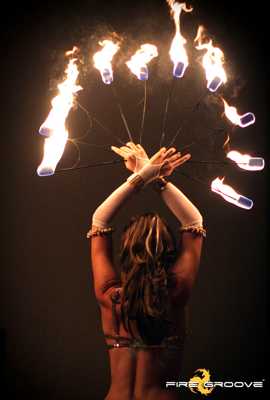 Fire fans are metal fans with wicked prongs sticking out at the ends. Fire fans can be used in different forms, one being belly dancing in which fans are moved, swayed and turned slowly with the movement of the body and the other being tech spinners, which use more upbeat music with much faster and more intricate spinning. There are two main types of fans: collapsible, which can open up to 180° and can give the illusion of one wick turning into many, or non-collapsible, which is fixed at 90° and has finger holds at the bottom. Even though the collapsible fans sound more appealing, the lack of finger holds makes spinning impossible and so they are mostly used in belly dancing where extravagant moves are not required. 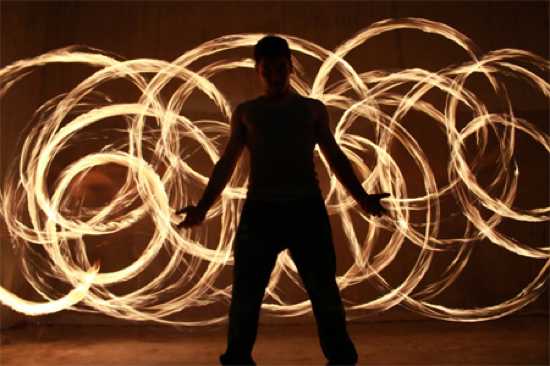 Poi where first used by the Maori people of New Zealand and are still widely used by them today. They are essentially just weighted objects attached to chains or strings with a grip at the other end. These are swung around in unison to make rhythmic circular patterns. The word poi refers to the spinning instruments, the music spun to, and the performance. In Maori culture the women are the main spinners but it is believed that the men also used to spin poi to gain wrist flexibility for combat. A poi performance usually includes singing or dancing and can be done synchronized with a partner or a group. Poi are available in many forms, including sock poi, LED poi and fire poi which can have up to three wicks on one chain. To make your own poi to start practicing with, all you need is knee high socks or stockings and some tennis balls. Poi have also evolved into other fire spinning tools, such as the meteor, which is one long chain with a grip at the center and two wicks or weights at the ends. To learn some poi moves, go to www.playpoi.com. 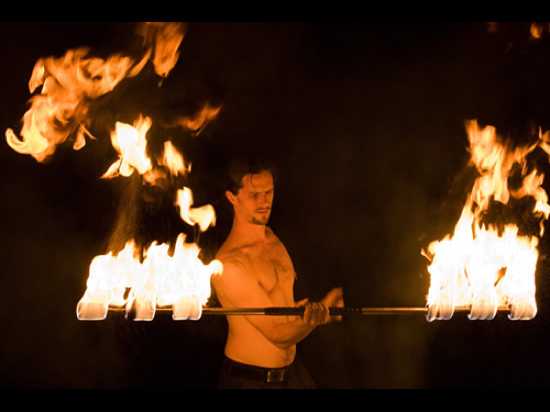 I will be damned if anyone has never played with a broom, hockey stick, golf stick or in fact, any stick. The staff is one of the oldest weapons and a stick is in the Museum of Historical Toys for being the oldest toy. There are martial arts revolving solely around staffs and they were even used in medieval Britain as a weapon. In the flow arts, there are a variety of possible staff practices including: single staff, double staff, contact staff and wands. Fire staffs mostly all have wicks at either ends, except for the wand, which only has one wick, though some staffs can have up to three wicks per side. The staffs can be twirled around the body, tossed in the air, wrapped around specific parts of the body and stalled in various patterns. Modern LED staffs are also available for spinning where fire is not permitted.