Chimpanzees are our closest living relatives, and yet they were unknown to most of the world until Charles Darwin wrote about and popularized them in 1859. Much about them has only been discovered recently, and misconceptions abound due to the exaggerations and artistic license used in works of fiction. Nevertheless, our similarities and differences are not what many people think. By learning about our relatives we can better understand ourselves. Chimpanzees are often incorrectly called monkeys, but they are actually in the great ape family just like us. The other great apes are orangutans and gorillas. There is only one species of human alive at present: homo sapiens. In the past, many scientists tried to argue that there were several species of human, and would often hasten to add that they themselves belonged to the ‘superior’ species. However, all humans can produce fertile children and so we are all the same species. Chimpanzees, on the other hand, are actually two species: pan troglodytes, the common chimpanzee, and pan paniscus, the gracile chimpanzee or bonobo. These two types of chimpanzee are completely separate species. Humans and both chimpanzee species evolved from a common ancestor, possibly sahelanthropus tchadensis, between five and seven million years ago. Only fossils of this ancestor remain. 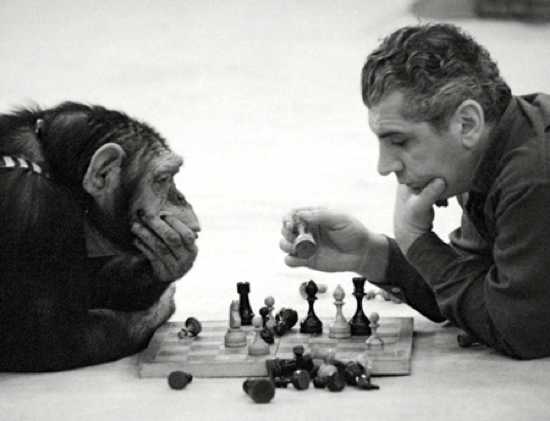 It is often said that humans and chimpanzees share 99% the same DNA. Genetic comparison is not simple due to the nature of gene repeats and mutations, but a better estimate is somewhere from 85% to 95%. This figure may still sound impressive, but most DNA is used for basic cellular functions which all living things share. For example, we have about half the same DNA as a banana, and yet people do not use this to emphasize how similar bananas are to us! So 95% does not say as much as it first appears to. Chimpanzees have 48 chromosomes, two more than humans. It is thought that this is because in a human ancestor, two pairs of chromosomes fused into a single pair. Interestingly, humans have some of the least genetic variation of all animals, which is why inbreeding can cause genetic problems. Even two completely unrelated humans are usually genetically more similar than two sibling chimpanzees. 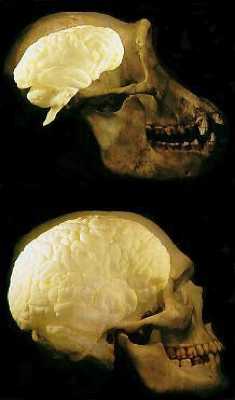 The brain of a chimpanzee has a volume of 370mL on average. In contrast, humans have a brain size of 1350mL on average. Brain size alone, however, is not an absolute indicator of intelligence. There have been Nobel Prize winners with brains ranging from below 900mL all the way up to over 2000mL. The structure and organization of the various parts of the brain is a better way of determining intelligence. Human brains have a high surface area because they are much more wrinkled than chimpanzee brains, with greater numbers of connections between many of its parts. These, as well as a relatively larger frontal lobe, allow us much more of the luxury of abstract and logical thought. Chimpanzees spend a great deal of time socializing. Much of their socializing is grooming each other. Juvenile and adolescent chimpanzees will often play with, chase, and tickle each other, as will adults with their offspring. Shows of affection include hugging and kissing, which are done between chimpanzees of any age or gender. Bonobos are especially frisky, and nearly every show of affection is done sexually, regardless of gender. Chimpanzees strengthen friendships by spending extensive time grooming each other. Humans spend a comparable time socializing, albeit more through talking than grooming. Nevertheless, much of the vast amounts of inconsequential chatter we produce is simply a more sophisticated version of chimpanzee grooming – it serves little other purpose than to strengthen our relationship bonds. Humans also demonstrate stronger relationships through physical contact – a pat on the back, a hug, or a friendly shove. Primate social group sizes closely reflect their brain sizes. Chimpanzees have about 50 close friends and acquaintances, whereas humans have between 150 and 200. Chimpanzees have complex greetings and communications which depend on the social statuses of the communicating chimps. They communicate verbally using a variety of hoots, grunts, screams, pants, and other vocalizations. Most of their communication, however, is done through gestures and facial expressions. Many of their facial expressions – surprise, grinning, pleading, comforting – are the same as those of humans. However, humans smile by bearing their teeth, which is for chimps and many other animals a sign of aggression or danger. A much greater portion of human communication is done through vocalizations. Humans uniquely have complex vocal chords, allowing us a great range of sounds, but preventing us from drinking and breathing simultaneously like chimpanzees can. Moreover, we have very muscular tongues and lips, allowing us accurate manipulations of our voices. This is why we have pointy chins whereas chimps have receding chins – we attach our many lip muscles to the prominent lower chin, but chimpanzees lack many of these muscles and so do not need a protruding chin. Chimpanzees and humans are both omnivorous (eat plants and meat). Humans are more carnivorous than chimpanzees, and have intestines more refined towards the digestion of meat. Chimpanzees will occasionally hunt and kill other mammals, often monkeys, but otherwise restrict themselves to fruit and sometimes insects. Humans are much more dependent on meat – humans can only obtain vitamin B12 naturally through eating animal products. Based on our digestive system and the lifestyles of extant tribes, it is thought that humans have evolved to eat meat at least once every few days. Humans also tend to eat in meals rather than continuously eating throughout the day, another carnivorous trait. This may be due to meats only being available after a successful hunt, and so are eaten in large quantities but infrequently. Chimpanzees will graze on fruits constantly whereas most humans will eat no more than three times in a day. Bonobos are renown for their sexual appetite. Common chimpanzees can become angry or violent, but bonobos defuse any such situation through sexual pleasure. They also greet and show affection to each other through sexual stimulation. Common chimpanzees do not engage in recreational sex, and mating only takes ten or fifteen seconds, often whilst eating or doing something else. Friendships and emotional attachments have no bearing on with whom a common chimpanzee mates, and a female in heat will generally mate with several males, who sometimes patiently wait their turn directly after each other. Humans experience sexual pleasure, like bonobos, however even sex for reproduction only takes much longer and requires more effort; long-term partnerships naturally form as a result. Unlike humans, chimpanzees have no concept of sexual jealousy or competition, as they do not take long-term partners. Both humans and chimpanzees are able to walk bipedally (on two legs). Chimpanzees will often do this to see further ahead, but prefer to move on all fours. Humans walk upright since infancy and have evolved bowl-shaped pelvises to support their internal organs while doing so. Chimpanzees, leaning forward during movement, do not need to support their organs with their pelvis and so have broader hips. This makes childbirth much easier for chimpanzees than for humans, whose bowl-shaped pelvis is in opposition to a large birth canal. Human feet are straight with toes at the front to help push directly ahead when walking, whereas chimpanzee feet have opposable big toes and are more like strong hands than feet. They are used for climbing and crawling, involving sideways, diagonal, or rotating movements. 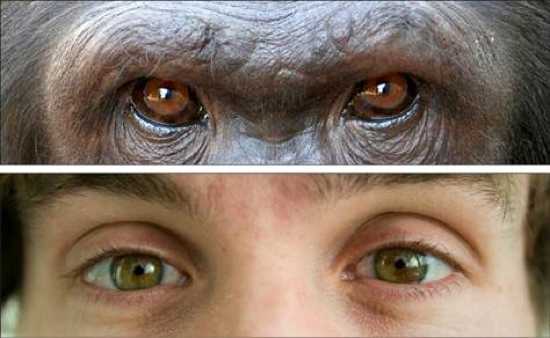 Humans have white around their irises, whereas chimpanzees usually have a dark brown color. This makes it easier to see where other humans are looking, and there are several theories as to why this is so. It may be an adaption to more complex social situations, where it is an advantage to see whom others are looking at and thinking about. It may help when hunting silently in packs, where eye direction is vital to communication. Or it may simply be a genetic mutation with no purpose – white around the iris is seen in some chimpanzees also. Both humans and chimpanzees can see in color, helping them to choose ripe fruits and plants to eat, and have binocular vision; their eyes point forward in the same direction. This helps see in depth and is crucial to hunting, rather than eyes on the side of the head like rabbits which help avoid being hunted. For many years, humans were considered to be the only tool-using animal. Observation in 1960 of chimpanzees using sharpened twigs to fish for termites has since changed this. Both humans and chimpanzees are able to modify their environment to forge tools to help with daily challenges. Chimpanzees will make spears, use stones as hammers and anvils, and mash leaves into a pulp to use as makeshift sponges. It is thought that as a result of walking upright, our front limbs were much freer to use tools, and we have refined tool use to an art. We live constantly surrounded by the products of this ability, and much of what people consider makes us ‘successful’ is rooted in our tool making.