Life is a struggle for survival. Animals live under constant stress to obtain enough food to eat by being as well adapted to their environments as they can. Animals who are poorly adapted will, in times of hardship, starve, fail to reproduce, and eventually die out completely. Throughout Earth’s history, life has constantly been taking new forms which are immediately tested for survival. When the climate or environment changes drastically, many animals who are poorly adapted for their new situation become extinct. Mass extinctions are when a substantial proportion of Earth’s life has vanished completely, leaving no further fossils or descendants. These events have been occurring since nearly the first appearance of life itself. All the animals alive today are merely the descendants of creatures who have been lucky enough to have met the adaption requirements each time their world changed. Here we look at ten of the biggest extinction events in Earth’s history. 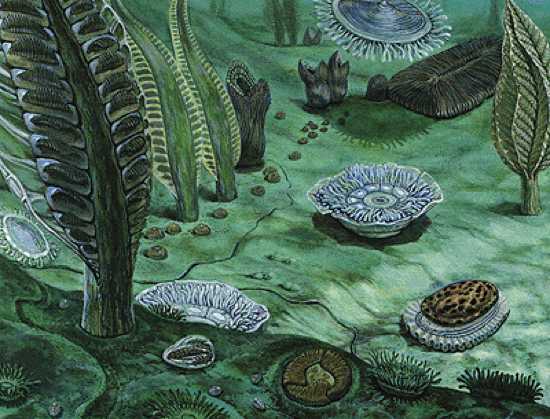 During the Ediacaran period, complex life had begun to take form for the first time on Earth. Tiny bacteria had evolved into the more complex and specialized Eukaryotes, some of which grouped together to increase their chances of finding food and avoiding becoming food. Most of these odd creatures did not leave a record because they had no skeletons; they were soft and tended to rot when they died rather than fossilize. Only in peculiar circumstances could fossils form, such as a creature lying on soft mud which suddenly hardened and left an imprint. These few fossils tell us of seas full of strange and alien creatures who resembled modern worms, sponges, and jellies. However, these creatures were dependent upon oxygen, as are we. The oxygen levels began to fall and world-wide extinctions occurred 542 million years ago. Over 50% of all species died. The huge numbers of dead creatures decomposed and make up some of today’s fossil fuels. The exact cause of the lowering oxygen levels is unknown, however, this mass extinction made room for the Cambrian explosion, a sudden diversifying of complex creatures beyond mere worms. 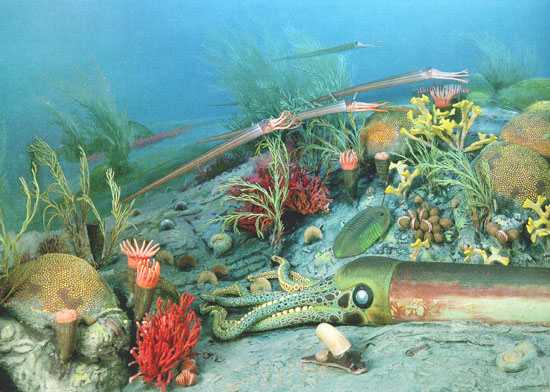 During the Cambrian period, life flourished. The Edicaran life had remained largely unchanged for millions of years, but in the Cambrian it suddenly diversified and evolved into endless new forms. Exotic crustaceans and trilobites became the dominant life in their huge numbers and variety. Shellfish and giant aquatic arthropods, similar to insects, filled the seas. These creatures had rigid exoskeletons which left a bounty of fossils for us to study. Life flourished until, rather suddenly in geological terms, over 40% of all species suddenly became extinct 488 million years ago. Those that remained survived poorly at best due to some harsh change in the environment. What this change was we do not know. One theory is that a glaciation occurred, the coldest part of an ice age. We have been enjoying an interglacial period, the warmest part of an ice age, for the past eleven thousand years. An extreme change in temperature can easily cause the extinction of a huge amount of life. This extinction event marked the border between the Cambrian and Ordovician periods. 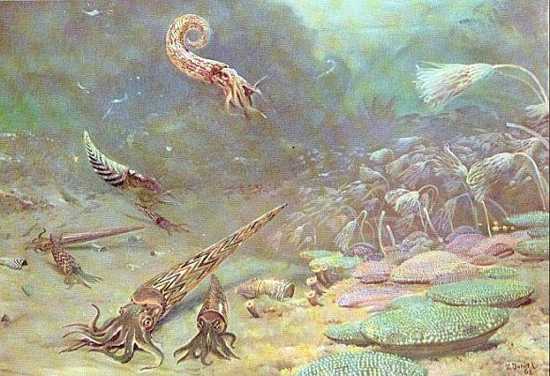 Life began to flourish once again during the Ordovician period. Nautiloids (primitive octopuses), trilobites, corals, starfish, eels, and jawed fish filled the seas. Plants were struggling to take hold on land. Life was gradually becoming more complex. 443 million years ago, over 60% of life died out in what is considered the second largest extinction on record. It was caused by a rapid ice age brought on by lowering levels of carbon dioxide. Much of the water that was home to the abundance of life became used up in icecaps and glaciers which in turn caused oxygen levels to lower as well. It is thought that a burst of gamma rays from space had destroyed the ozone layer and the Sun’s unfiltered ultra-violet radiation then destroyed much of the plant life, which caused the initial drop in carbon dioxide. Although some life survived and continued on, by number of species it would take over 300 million years to recover from this event. 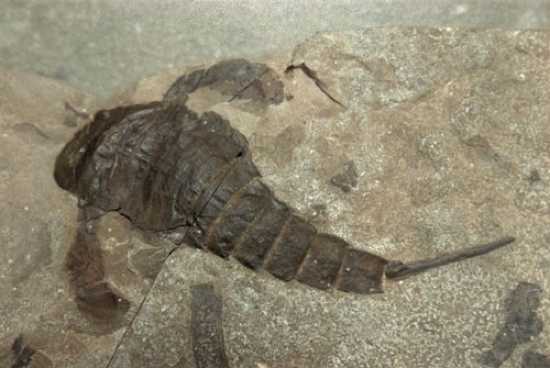 Following the Ordovician extinction, the Silurian period began. Life recovered from the last mass extinction and this period was marked by the development of true sharks and bony fish, most of which appeared perfectly modern. Moss and small plants finally began to grow freely on land along coastlines, and some arthropods evolved into spiders and millipedes who were adapted to the dry air and lived alongside the land plants. Enormous sea scorpions became abundant, and trilobites continued to dominate. 420 million years ago, there was a sudden climate change which caused the extinction of perhaps 30% of all species. The atmospheric gases changed in proportions that many creatures found disagreeable or toxic. The cause of this change is not known. Life struggled on until the Silurian period ended and the Denovian period began, when evolution produced a different model of life that thrived. 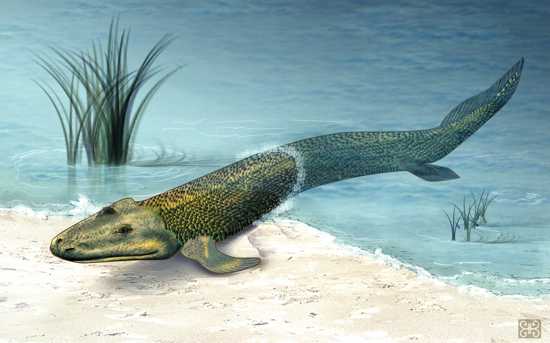 The Devonian period was where certain fish evolved sturdy fins that let them crawl onto dry land, eventually becoming animals such as reptiles and amphibians. In the seas, vast coral reefs were filled with fish and sharks, some of whom ate trilobites. The trilobites lost their footing as a dominant sea creature for the first time since they appeared over 100 million years prior. In fact, the sharks of this time were so successful that they have not needed to change much and some modern sharks look almost exactly the same as their predecessors. Land plants evolved seeds and diversified. More complex land plants developed and soil appeared for the first time in history. Strange forests of 8m tall fungi sprouted, which sadly are no longer with us. 374 million years ago, 75% of all this amazing life died out. This was due to a change in atmospheric gases, possibly due to massive volcanic activity or a meteorite impact. 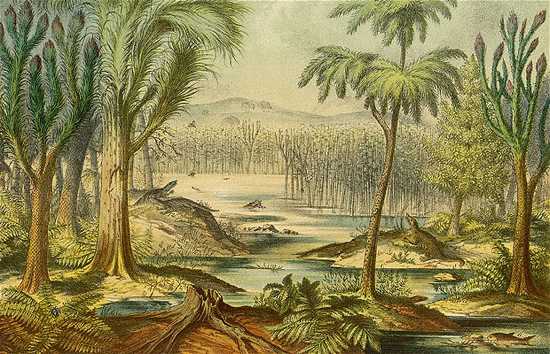 After the Devonian period came the carboniferous period. A few land animals developed terrestrial eggs, which allowed them to live almost anywhere on land rather than being confined to shores where they could lay their eggs, as turtles still do today. Winged insects appeared and prospered. Sharks enjoyed a golden age and the few trilobites who had survived the last extinction became increasingly rare. Gigantic trees appeared and vast rain forests covered much of the land, increasing the air oxygen content to 35%. For comparison, today 21% of the air is oxygen. Conifers from the Carboniferous period remain almost unchanged today. 305 million years ago, a short sudden ice age caused carbon dioxide levels to become the lowest in the known history of Earth. The great forests died and with them, many of the land animals. Nearly 10% of all the species on Earth disappeared at this time. The trees rotted, condensed, and are now our main source of carbon fuels, after which this period was named. 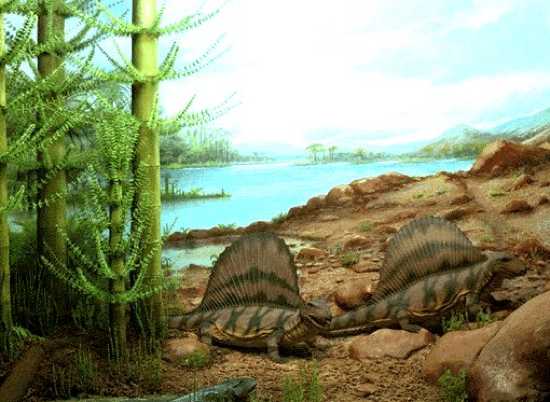 After the rain forests fell, the most successful animals left on land were those who laid eggs. These quickly dominated before other species had a chance to recover and they diversified, producing a huge variety of reptiles and dominant synapsids, which were mammal-like reptiles and the ancestors of mammals. 252 million years ago, a disaster occurred which the Earth had never seen before and has never seen since. It was caused by a meteorite impact or volcanic activity which changed the air composition radically. Between 90% and 99% of all life became extinct. This is the biggest mass extinction in history, and is known as the â€˜Great Dying’.
For reference, let us look at the extinction of animals caused by humans. During our tenure, high estimates suggest that we have wiped out nearly 1000 species of animal. There are about 8 million species alive today, meaning that even according to the most pessimistic estimates, we have obliterated 0.01% of all animal life. Although this is nothing to be proud of, it is infinitesimal when compared to the gargantuan extinctions nature herself casually puts forward. 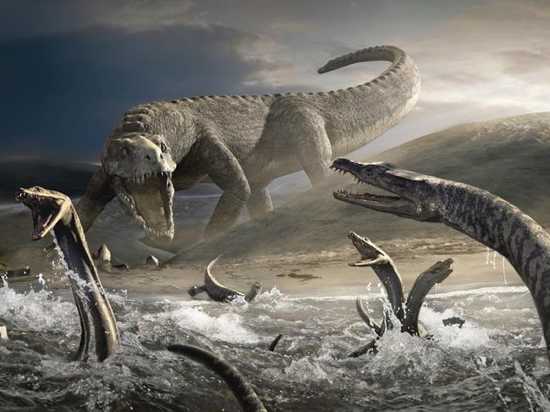 After the desolation caused by the end of the Permian period, reptiles again became dominant and the dinosaurs appeared. Dinosaurs were not dominant above other reptiles, and at this stage were not much larger than horses. It was their descendants who became the famous and fearful creatures we know so well. All the larger dinosaurs, tyrannosaurus, stegosaurus, triceratops, and the giant long-necked sauropods, came in the Jurassic or the Cretaceous periods. 205 million years ago, 65% of Triassic life died out, including all the large land animals. Many of the dinosaurs were spared due to their small size. Most mass extinctions last a million years or so, but this one took only ten thousand years. It was likely caused by massive volcano eruptions which disgorged huge amounts of carbon dioxide or sulphur dioxide, resulting in sudden climate change. 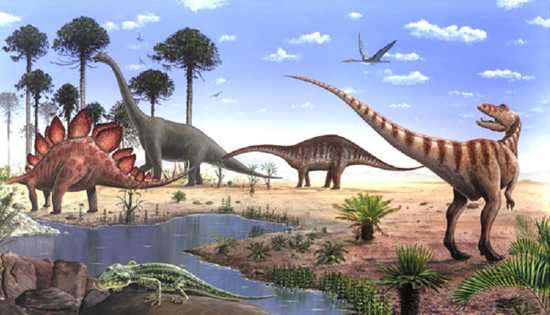 During the Jurassic period, gigantic sea reptiles such as the famous plesiosaur dominated the oceans. Pterosaurs ruled the skies and dinosaurs ruled the land. Stegosaurus, the long diplodocus, and the great hunter allosaurus became common. Conifers, cycads, ginkgoes, and ferns provided lush forests. Smaller dinosaurs evolved feathers and birds began to appear. 200 million years ago, 20% of life suddenly vanishes from the fossil records, mostly marine species. Shellfish and corals had been widespread, yet they almost completely vanished. The few who survived managed to repopulate the seas gradually over the coming millions of years. This extinction did not greatly affect land animals, and only a few species of dinosaurs were lost. The cause of this almost marine-exclusive extinction is a matter of debate, but one possibility is that the ocean tectonic plates sank slightly and made the oceans deeper. Most marine life was adapted for shallow water, and it perished as it crept further and further away from the surface. 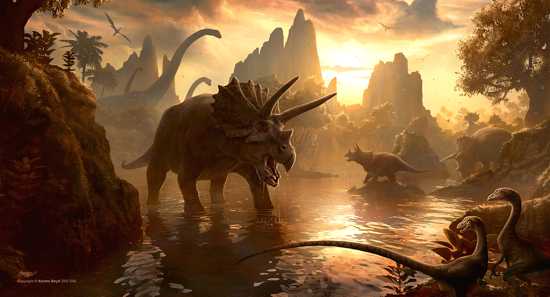 This is the most famous extinction event. After the Jurassic ended, dinosaurs continued to proliferate and evolve throughout the subsequent Cretaceous period. They specialized into the forms which are familiar to many children today. More importantly, it was only during the Cretaceous period that life finally recovered from the much earlier Ordovician-Silurian extinction. The number of species at last matched and then exceeded the number from the Ordovician period, over 300 million years prior, for the first time. The synapsids finally evolved into small, rodent-like creatures, which were the first true mammals. 65 million years ago, a huge meteorite impacted the earth at Chicxulub in modern Mexico, disrupting the atmosphere and causing severe global warming, in turn killing 75% of all species. This meteorite contained a high concentration of iridium, normally rare on Earth, and all around the world rocks which are 65 million years old show a thin layer of iridium left over from the impact. A few small reptiles and mammals were among the survivors of this extinction. Mammals would go on to replace dinosaurs as the dominant terrestrial animal.