The avant-garde is just the norm that hasn’t happened yet. Certainly that seems to be the case with most of the historic ‘avant-garde’ works that have so far been named to the Library of Congress’s National Film Registry.

The National Film Registry annually recognizes American-made films that have been deemed to be ‘culturally, historically or aesthetically important’ and, therefore, in need of permanent preservation by the nation’s largest library. What is appointed to the list each year is the decision of the Librarian of Congress with the recommendations of the National Film Preservation Board, a 44-member group made up of professionals from the American film industry. Public votes are also accepted and considered in all discussions.

Since 1989, when the Registry was founded, at least 25 films have been added every year. Today, over 500 films on the Registry including ‘Gone With the Wind,’ ‘E.T.,’ ‘Snow White,’ the Zapruder film, ‘Citizen Kane’ and ‘The Wizard of Oz’ along with news footage, documentaries and silent classics.

Since its inception, the Librarian and the Board have worked to incorporate avant-garde works into the Registry, recognizing the important role that experimental filmmakers play in moving the art of movie-making forward. Though when viewed today many of them still come across as being on the cutting edge, in them one can also recognize film and story-telling techniques that are now commonplace among popular, contemporary filmmakers. 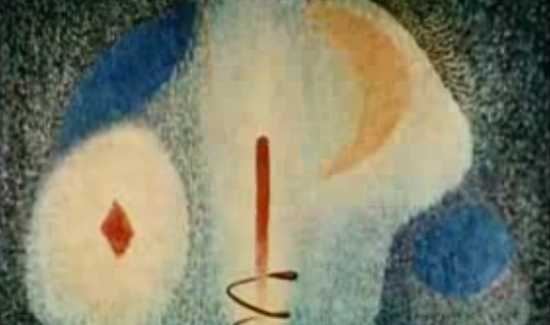 German-born Oskar Fischinger was a painter, filmmaker and animator whose work involved brilliant colors and abstract forms as well as inventive photography and film techniques in order to capture them. His ‘Motion Painting No. 1’ is made up a series of oil paintings on acrylic glass repeatedly overlaid on top of each other which then, via stop-motion photography, causes them to appear to move and transmute, multiply and recede. The ‘moving’ paintings are timed to the strains of Bach’s Third Brandenburg Concerto. Fischinger’s finished film would influence filmmakers and animators for generations to come. Among them: Norman McLaren, Jordan Belson, and Harry Smith. You can watch the film here.

An American artist and sculptor, renowned for his unique assemblages, Robert Cornell would later bring his artistic eye to experimental film-making. His first completed work was ‘Rose Hobart.’ ‘Rose’ is comprised of ‘found’ footage Cornell purchased from junk shops and other places, much of it outtakes from the 1931 film ‘East of Borneo’ starring actress Rose Hobart. Conceived as a ‘tribute’ to the luminous Hobart, the film inter-cuts often slowed-down, non-linear images of the actress with footage of an eclipse and a volcano among other out-of-context shots. Cornell – as he might have in one of his assembled boxes – is toying with combinations, contradictions and perceptions, interrupting surrealism into a motion picture form.

Edgar Allen Poe’s classic tale of the macabre serves as the foundation for this 13-minute avant-garde film by James Sibley Watson and Melville Webber. Startlingly stylized in composition, costume and set design, this version of the horror classic is as much interested in the tale’s psychological underpinnings as its haunting story. Filled with innovative editing, lighting and camera work, ‘Usher’ appears as modern today as when it premiered at the Film Arts Guild in 1929.

Husband-and-wife filmmakers Maya Deren and Alexander Hammid’s 1943, 14-minute experimental film is today acknowledged as one of the classics of avant-garde cinema. Noir-ish in style and multi-layered in narrative, repeated viewings are often needed to deconstruct its images and interpret its dense symbolism. Its adventurous visual storytelling bend standard film conventions while, at the same time, reinterpreting various aspects of ‘reality’ itself.

In some ways as much a math exercise as a film study, ‘Powers of Ten’ was produced by visionary design duo Charles and Ray Eames. Their short film makes excellent use of the medium to convey concepts of scale, time and distance. Beginning with the shot of a young couple enjoying a picnic, an overhead camera, positioned one meter from its subject, slowly begins to withdraw in increments of 10 x 10 – 10 meters every 10 seconds. With time, the couple becomes just specs in the distance as they are dwarfed first by their neighborhood, then their city, then their continent, and then the planet. The film later reverses and zooms in, eventually reaching the molecular level. Billed at the beginning as ‘a film about the relative size of things in the universe,’ at the conclusion of its nine minutes, ‘Powers of Ten’ has revealed the world simultaneously as both a very big and very small place.

‘Salome’ is actress/producer Alla Nazimova’s impressionistic, surrealistic interpretation of Oscar Wilde’s decadent classic. Born in Yalta in 1879, Nazimova (as she was often simply billed) began her career on the Russian stage before coming to America in 1906. She made her film debut in the 1916 and quickly established herself as one of the silent era’s most acclaimed performers. Known for her stylized acting, Nazimova’s out-size performance matches this film’s at times bizarre costumes, theatrical sets and arch mood. A critical and financial failure at its time, ‘Salome’ is now recognized as one of the cinema’s great ‘art films,’ progressive in its style and imagery.

Marie Menken was a painter, filmmaker and all-round bohemian. In her volatile marriage to fellow filmmaker Willard Mass, she was allegedly also the inspiration for the character of Martha in Edward Albee’s ‘Who’s Afraid of Virginia Woolf?’ Her appropriately titled ‘Glimpse of the Garden,’ seems inspired by her paintings. For ‘Glimpse,’ Menken focuses her camera on the flowers and plant life of a garden, sometimes in extreme close-up, its shifting images edited to the songs of area birds who act as the film’s only soundtrack. Her sharp eye and editing elevates this footage of an ‘ordinary’ garden into a memorable tone poem.

After taking the ‘traditional’ art world by storm with his radical portraits of everyday objects like soup cans and Coke bottles, eccentric American artist Andy Warhol eventually expanded his work to include photography and film-making. Though some of his films possess some slim trace of a plot, others more concern the radical deconstruction of the film-making process. This is especially true of his ‘Screen Tests’ series, a collection of extreme close-ups of the famous and infamous without sound or, seemingly, purpose beyond determining an individual’s charisma. Warhol applied this same philosophy to his 1964 ‘Empire,’ a six-hour long single, static shot of New York’s Empire State Building shot from a building across the street. Though considered by many a trite novelty, ‘Empire’ has proved prophetic – prefiguring everything from computer screensavers to webcams.

After he was a child actor during Hollywood’s ‘Golden Age’ but before he was a notorious author of the ‘Hollywood Babylon’ books, Kenneth Anger was an experimental filmmaker. His ‘Scorpio Rising’ (1963) blends images of Catholicism, Nazism, homoeroticism and the occult in a manner that is still controversial today. His 1953 ‘Eaux D’Artifice’ is less fractious but no less compelling. In the heavily blue-tinted film, a woman (her face hidden) in 18th century garb wanders among the fountains of an Italian village. Time, narrative and even proportion is called into question in Anger’s film which features Vivaldi’s ‘Winter’ as its soundtrack.