Have you ever looked at a guy wearing some lederhosen and thought: “Hmm, what’s the history behind those stupid looking pantaloons?” Me neither. But the entries in this list look way cooler and have a far more interesting back story. 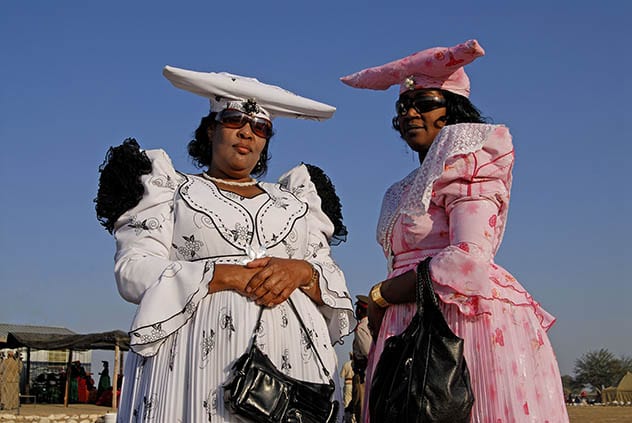 When we think traditional folk garb, we do not usually think of high fashion. Just look at how amazing these ladies look! Who’d have thought that 19th century fashion once worn by German missionaries could be so colourful, and look so fashionable today. This ever evolving style is visually arresting with fashion designers in the city of Windhoek innovating with the dress as inspiration, using new patterns and fabrics. But there is a rather dark history behind the dresses worn by the Herero people in Namibia.

At the beginning of the 20th century, Germany held the area now known as Namibia as part of their empire. Obviously, native people were not too happy under colonial rule and decided to revolt. Not being the most congenial group when faced with mass insubordination, the Imperial German army decided it would be best to put a good number of the Herero people (along with the Namaqua people) to death… after a good dose of medical experimentation at the Shark Island prison camp, of course. This dark foreshadowing of later German atrocities did not assuage the native tendency to adopt western fashion and turn it into their own. Hence the Herero dress, worn today both as a grim reminder of their tragic colonial past and as an indicator of their ability to survive, adopt and adapt. 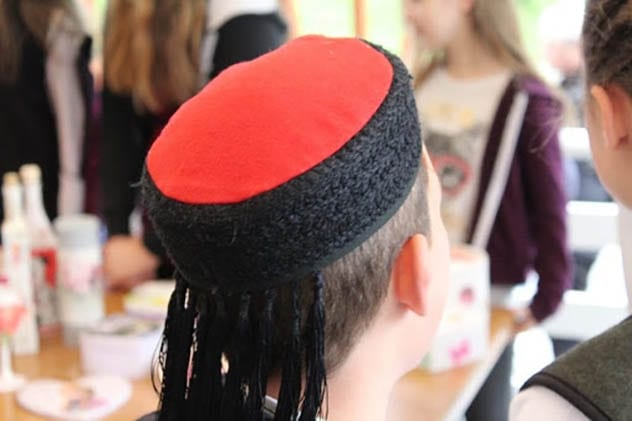 Although I feel blessed to have been born in a ‘Celtic’ nation (even though the term ‘Celtic’ is a little problematic given its relative vagueness and the disparity of the cultures that claim to be ‘Celtic’. This disjuncture doesn’t affect its ubiquity because, hey, we all like the colour green…) there is a tendency amongst academics in Scotland, Wales and Ireland to be a little trigger-happy in labelling any European tradition shrouded in mystery as being a part of ‘our’ culture.

Having said all that, many experts have pointed to this particular piece of Balkan headgear as an example of the remnants of ‘Celtic’ culture in the region. The Lapydes, a group that lived in central Croatia and part of Bosnia were a group that, some historians suggest, were a mix of Pannonian and Illyrian peoples that had adopted ‘Celtic’ culture by the 4th century BC. Like many attempts to Celiticize certain discoveries or extant cultural practices, this one appears to be more conjectural than cold, hard fact. There’s no smoking gun that points to the Lapydes having invented the Lika cap and plenty of evidence that shows a much later derivation. But as we say in Wales, Scotland, Ireland, Brittany, Cornwall, the Isle of Man and Galicia: “ah well, we’ll take it anyway”…in different languages respectively, of course. 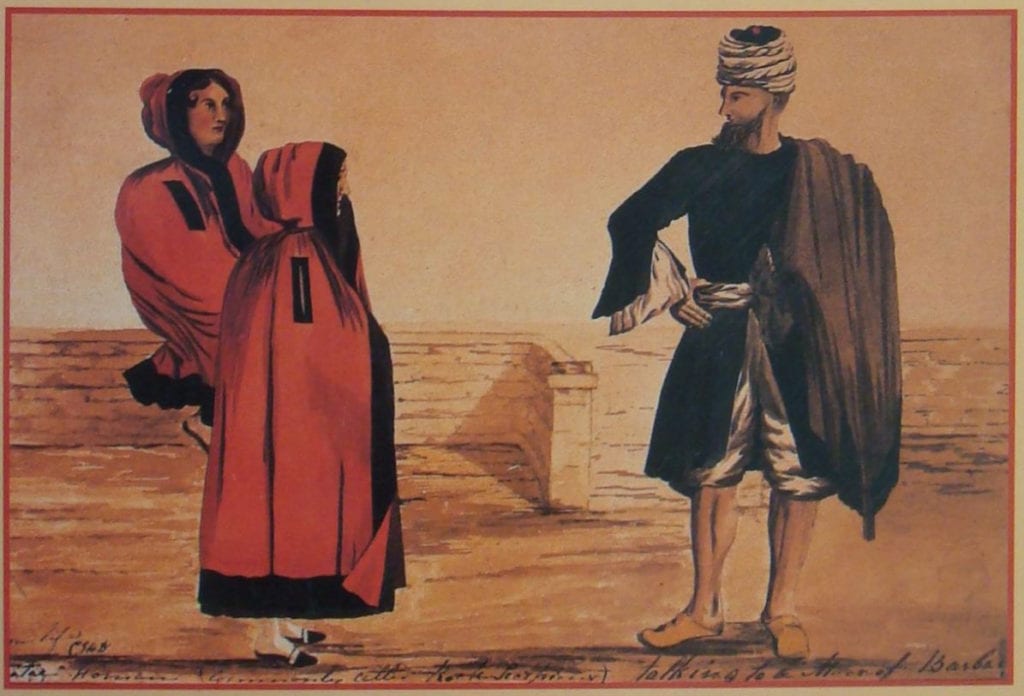 If you ask anyone who grew up on ‘the rock’ about the history of the famous red cloak, you’ll get the same story. Back when the British army occupied Gibraltar in the 19th century, the local ladies fancied the bright crimson hue of the gallant looking soldiers. They bartered with corrupt quartermasters aboard the naval ships (or just raided unguarded stock) and fashioned their beautiful cloaks from the red coats, having only to pay for the satin that forms the trim. Yeah, probably not. Evidence shows, although scant, that older Genoese women used to wear such garments, probably introducing the fashion to Gibraltar. It may be the case that some ladies, unable to procure good fabric due to a military blockage, took to thievery in order to make their cloaks, but an origin story this is not. Still, they do look pretty cool. 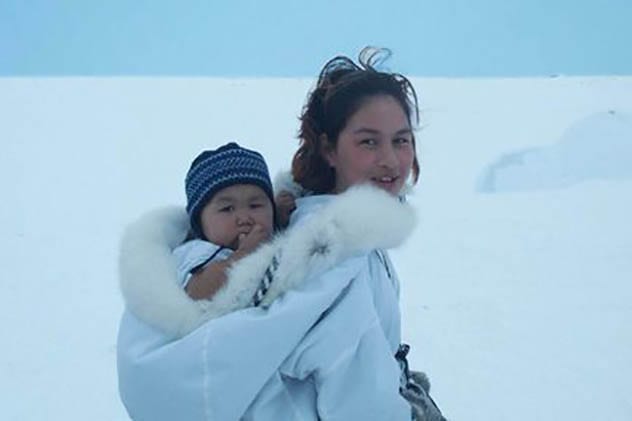 Nobody wants a frozen baby. If you’re an Inuit mother living in the frozen tundra of Nunavut, Northern Canada, you’ll probably agree that this is a serious practical issue. You can’t just pop your mewling little rug rat down on a nearby rock whilst you pick some berries, you’ll soon have a kidsicle. Enter the Amauti, the handy winter parka that you can carry a child in with 360? access! Just want to carry the child? No problem, the Amaut (comfy, fur-lined child pocket) allows for you to lug your little baby around on your back. Need to breast feed? That’s a cinch, the pocket extends around to the front. Just whip out your boob and let rip! Jeez, I’m not a woman and I’d still love one of these… I’d keep a bag of Doritos in my Amaut. 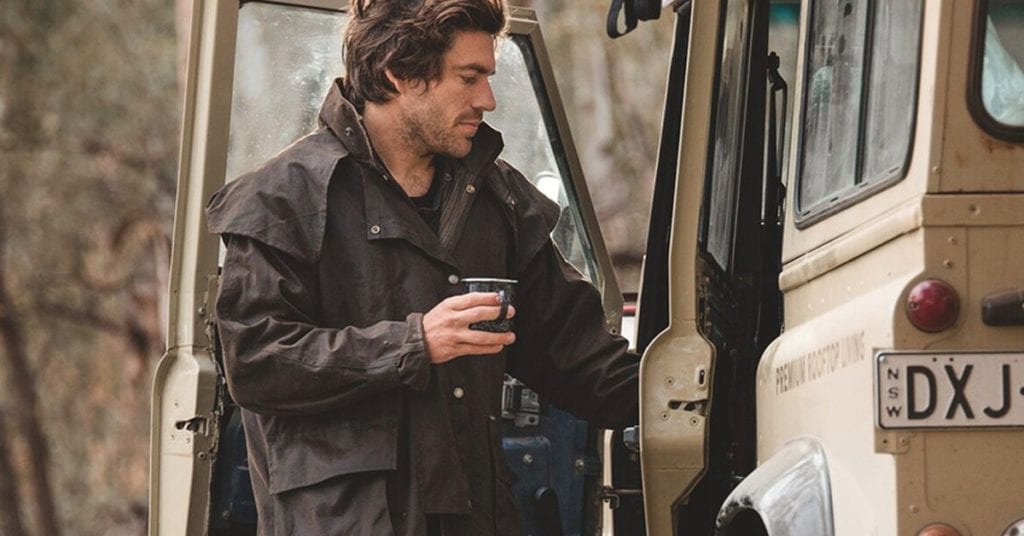 Dry as a bone. Well, a bone that has been left out in the sun for a week or so…not sure they are referring to a bone freshly plucked from a person’s torso—that’d be a little wet, I assume.

When you think of the land down under, you do not think of drenching downpours of heavy rain. Remember that Australia is pretty much a continent all of its own, not just a country, so all forms of weather are present there. A canny Scotsman named Edward Le Roy emigrated to Oz from New Zealand in the late 19th century with an amazing idea. Sailors work in wet conditions, they need coats. He took some canvas sails and fashioned them into jackets which he then sealed with linseed oil. Over time, Le Roy found new customers. 19th century stockmen would drive cattle all over the outback, from station to station. If rain hit, they’d get wet. After a few alterations to make his design better for horse riding rather than sailing, a legendary coat was born. So iconic is this wet weather jacket that they made an appearance at the opening ceremony of the 2000 Sydney Olympic Games. Take that, Barbour. 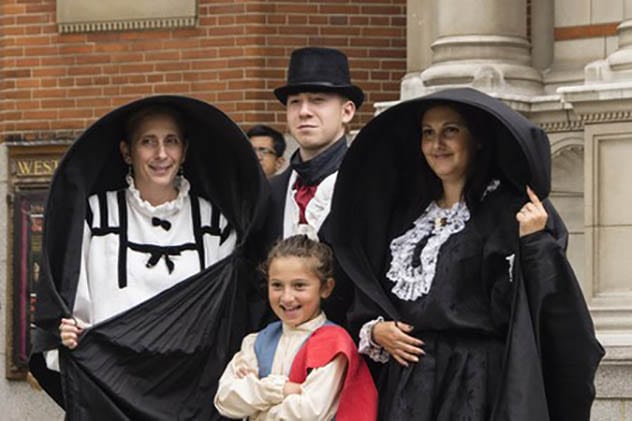 Much like the red cloaks of Gibraltar, a couple of stories exist as to the origin of this weird looking garment. One story suggests that some ladies from Italy wore the ghenienel (yup that’s the plural) as a mourning dress due to their husbands’ being massacred back in their homeland in 1224. They then got banished and ended up on the island of Malta. Charming.

The second story is pretty cool—in times gone by, poor country girls couldn’t afford to purchase cloaks or shawls to cover their heads before entering church so they stitched some left-over material onto a skirt they already owned, thus forming the elaborate bonnet and allowing them to attend mass.

The final story is by far the best—back when good ole Napoleon was killing his way across Europe, his men gained a bit of a rep as a bunch of raunchy horn dogs. The pious, modest ladies of Malta were very wary of these them, not too thrilled at the notion of being perved on by a bunch of soldiers. They fashioned a makeshift garment that looked just enough like a nun’s habit in order to convince the handsy Frenchmen that they were brides of Christ, not potential brides for them. 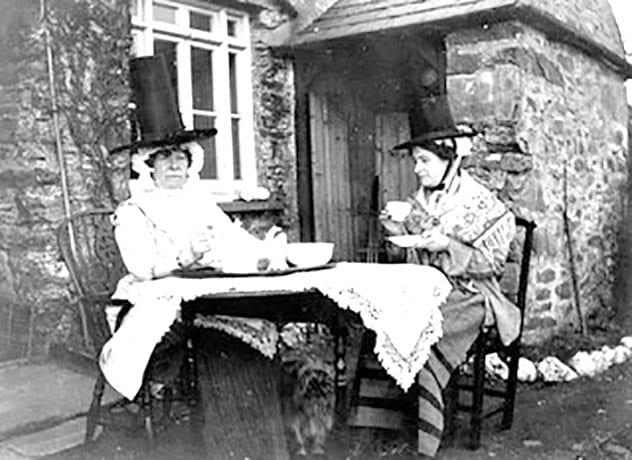 It seems that the ladies of Wales saw a picture of Abraham Lincoln and thought: “That’s the look we’ve been waiting for”. This thoroughly odd looking hat is a bit of a cultural icon in Wales, having been donned (along with skirts, bonnets and shawls) by ‘the Daughters of Rebecca’, a group of male anti-tollgate rioters who launched many attacks on the unfair cash grabbers in South Wales in the 1800s… dressed as ladies, of course.

But it was the hat’s role in staving off those pesky French buggers that is its most notable role in history. In 1797, the French navy had planned an invasion of Britain. As their ships sailed along the coast of Sir Benfro in South Wales, a watchman in one of the ships’ crow’s nests frantically reported what he saw to his commanding officer—a large detachment of red coats guarding the high ground above the town of Fishguard. This was enough to dissuade the invading force who promptly turned their ships around and fled back across the channel. What had the spotter actually seen? A group of ladies working in the field, their pitchforks looking like muskets, their red shawls like red coat uniforms and the tall Hetiau Gymreig like traditional army shako caps. Cool story, but veeeery unlikely to have happened. The hats first show up in the 1830s, many years after the supposed events occurred. Plus, did French ships not have any cannons? Meh, the hat is weird enough on its own, especially when you see three burly Welsh rugby fans wearing them at the Millennium Stadium. 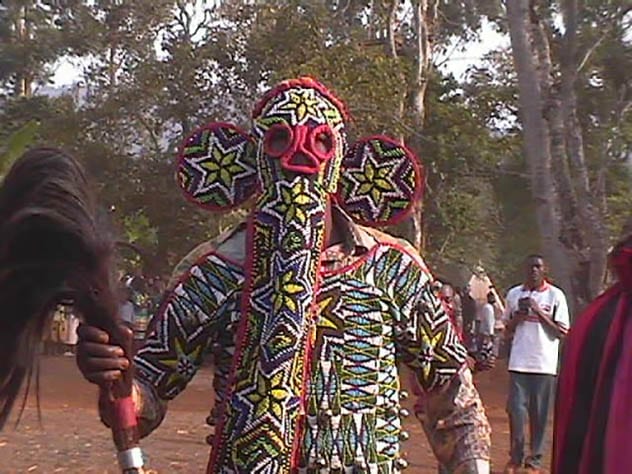 A charging elephant must be a terrifying sight, but something about these beautifully made masks strike me as even more frightening, like Leatherface at Mardi Gras.

When a commodity is rare and you are in power, showing off an abundance of said rare commodity is what a king or queen should do. Amongst the Bamileke peoples of Cameroons grasslands, glass beads were once very rare. The elaborate elephant masks, adorned with thousands of tiny beads, are the ultimate status symbol. Each mask was owned by the king and loaned to very select men at his behest. The elephant masked men would then dance at special occasions, most notably at the funeral of the king himself. Who doesn’t enjoy a Rubik’s Cube? Most people, those of us who may get a side to show one block colour, eventually get bored or enraged at Erno Rubik’s eponymous puzzle block and end up throwing it into a mouldering cardboard box in the far corner of our attic. Imagine wearing an equally complex garment? Enter Japan…

You’ll still see this traditional dress associated with noble ladies-in-waiting getting donned by members of the Imperial Japanese household today. The wider public? Not so much. Far less elaborate kimono are worn if Japanese ladies want to wear traditional clothing. The word means ‘twelve layers’, although the exact number of layered fabrics vary, and would take an age to put on and weigh up to 20kg. Despite falling out of favour with contemporary Japanese women, a quick Google Image search for ‘Harajuku Fashion Trends’ shows that they still have a penchant for colourful, complex styles. Many of the costumes listed here have been beautiful, practical or slightly weird-looking (sorry Cymru, your hats look stupid), but where else in the world has a national costume you can handily store your shotgun cartridges, ready to lock and load?

Often worn at celebratory events like weddings, as well as a symbol of national pride, the Georgian Chokha is also a common garment worn by other peoples in the Caucasus region (such as Chechens and Ossetians). The jacket, along with the traditional woollen hat (called a papakha) and those bullet holders (gazyrs) were once made mandatory for all Georgian diplomats to wear at official meetings when working abroad. That’s one way to say don’t mess with us, I guess. Strap yourself with the khanjali (very pointy-looking, ornate dagger) to complete the ensemble and watch as those scaredy-cat Belgians provide you with free beer for the next hundred years.