There are some foods you should read the label on before you buy. Fortunately for characters in films they usually have a man with a white beard and words of wisdom to warn them not to eat that food. And inevitably, they do. Here are some of the most memorable and iconic shouldn’t-have-swallowed scenes in cinematic history. They’re not the best because of the number of victims they reap, but the ones that make us clutch our throats or laugh till our stomachs hurt even after the movie is over. 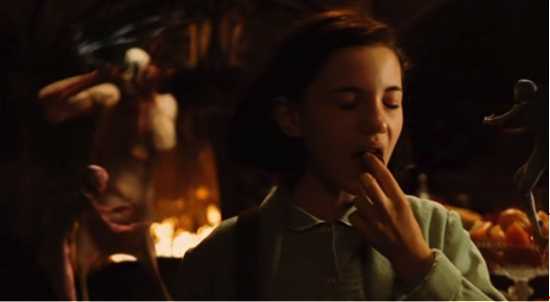 Young Ofelia must go through many trials in a mythological underworld to help her sick mother recover. One trial is where she must pass a feast table full of delicious food, and not to take a single bite. It’s easier promised than done, as she must pass gourmet roasts, berry pies, and exotic fruits piled on gold and silver dishes. After she has fetched the magical item and ensured that the frozen monster is harmless, she eats a grape. And then she eats another, and another, as the monster staggers to life, pushes bloodshot eyes into its hands and staggers up behind her for its meal. 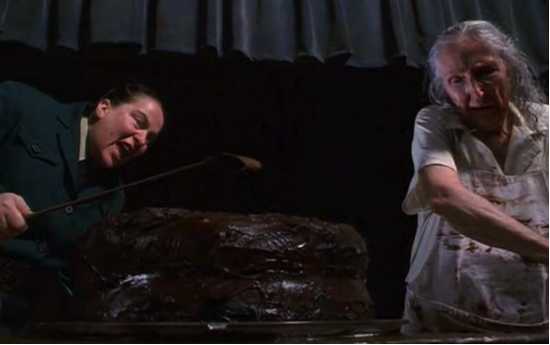 You can’t eat that candy, you can’t have that cake. For some reason the acquisition of sweets is a huge theme in Matilda. Bruce Bogtrotter filched a slice of cake belonging to the school president. And worse, he did it from Trunchbull who is one of the most villainous school presidents of all. She’s beefy, she’s tyrannical, and she locks kids in a nail studded closet when they get on either of her bad sides. Happily, this cake eating ends in Bruce’s victory as he waves his plate triumphantly and the school roars with approval. However, the audience will still be groaning as he eats bite after nauseous bite. 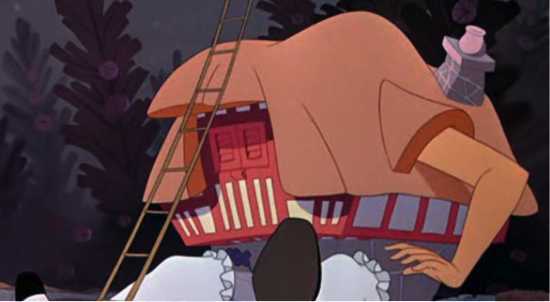 Alice has carelessly eaten more food in Wonderland. In this case, it’s a bowl of cookies and sweets that, with each bite, makes her grow larger. The white rabbit gets to his house in time to see that a large-as-life Alice has taken up his entire abode. Does Wonderland food have a unique effect on Alice? Or did the white rabbit carelessly leave his growth candy in a bowl for guests, rather than locked tightly in a closet? It takes a vulture, a lizard, a rabbit and his carrot to finally free Alice from the house. Always make sure to eat your vegetables.

7
Harry Potter and the Half Blood Prince
Cursed Water

Throughout the Harry Potter movies and the books we see Dumbledore as wiser than Merlin, stronger than a dragon, and touting a heart of gold. So it’s all the more tragic when we watch this great wizard crying for death as he drinks a weakening poison. It makes him relive his worst memories. And Harry has to help him do it, even tricking him into taking one horrible swallow after another. And yet afterwards weakened and exhausted, Dumbledore still manages to fight off an army of reanimated corpses. This is the only consumer on this list who knew full well the suffering he was about to endure, and did it for the greater good. 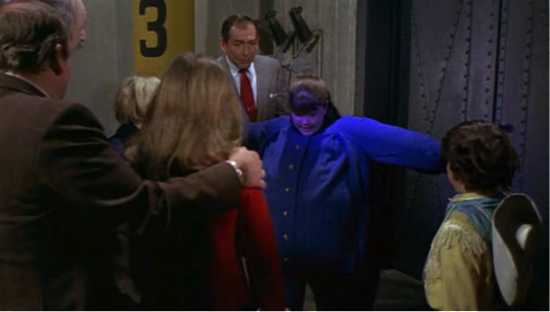 Tim Burton just couldn’t resist doing an exact transformation of the 1973 cinematic version of Violet Beauregarde turning into a blimp-like human blueberry. While Burton took many other liberties with the woeful fates of the children touring his chocolate factor, we got to watch twice Violet foolishly chewing the experimental three-course gum and expanding the exact same way. She chewed and chewed until her face turned blue and she swelled up. In the end, the real first laugh was when we got to see Mel Stuart’s Oompa Loompas rolling Violet (an ominous name, to be sure) out the door.

5
The Lion, the Witch and the Wardrobe
Turkish Delight

Avid readers have read time and again Edmund falling prey to the enchanting addition of the witch’s sweets. The movie does its fair share of justice to this and then some as Edmund closes his eyes in ecstasy, gobbling down each piece with growing obsession. He doesn’t notice how the White Witch is staring at him entrancingly, or that once he is finished with the drinks and sweets they revert back into snow. One wonders whether it was a strict diet or moral reversal that put him on the right path. More than one person has tried Turkish delight after seeing Edmund eating it as if it were the end of the world.

4
Spirited Away
The Food of the Spirits 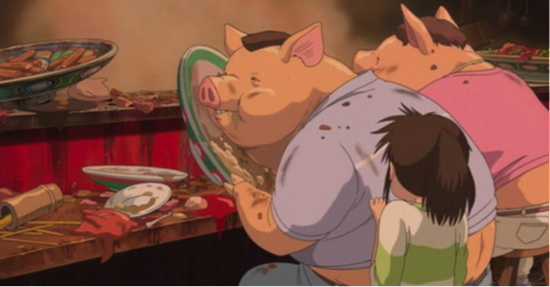 Spirited Away is made by the best anime film director Hayao Miyazaki, in which Chihiro’s family wanders into the spirit world. There, her parents start gobbling delicious food. Chihiro wisely refuses to eat the food. It’s seemingly unattended as her father assures his daughter, “Don’t worry, you’ve got Daddy here. He’s got credit cards and cash.” It’s too bad he didn’t have some pig-reversal cure, which Chihiro has to earn by working at a spa resort run by the evil witch Yubaba. Her parents are left to await a crispy, fried end if she doesn’t. That’s what you get for gobbling up other people’s food like pigs.

The only magical element about the poisoned wine in Princess Bride is the intellectual monologue delivered by the crafty, squinty-eyed Vizzini. In a movie where Westley must out-fence an expert swordsmen and tackle a giant, it’s only fitting his last challenge is a battle of wits. Westley challenges the villain to guess which goblet of wine is poisoned, at which time they’ll both drink. Vizzini goes through a comical speculation of roundabout logic, which ends when he does the old switcheroo with Westley at the last second. When they drink Vizzini starts laughing in triumph, only to fall dead with a grin on his face. 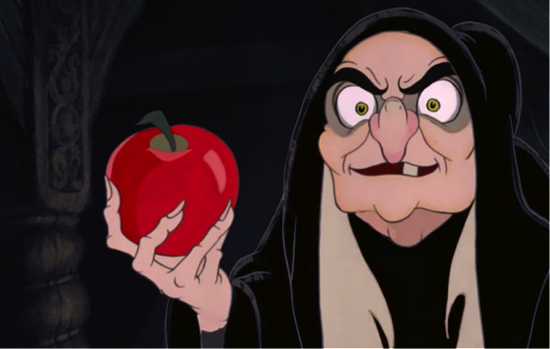 Snow White’s poisoned apple is a kinder version of Eve eating the fruit of the devil. Snow White doesn’t know that this woman is up to no good… but shouldn’t she? As the witch snickers wickedly, and gestures with claw-like fingers she not only looks evil but speaks evilly. Between wishing for a prince and holding the juicy apple, we see the dwarves and various forest animals rushing to warn her. When Snow White finally succumbs to the poison it’s all the more dramatic when we only hear her dying voice off screen, and then it abruptly cuts to her dead, limp hand. Snow White has made millions of viewers urging Snow White to not take that bite.

1
Indiana Jones and the Last Crusade
The False Grail Water

The real Holy Grail will cure any mortal wound. One of the many false grails will turn you into Christopher Lloyd from Back to the Future if he achieves the age of 150. If his vocal chords weren’t deteriorating perhaps Donovan would have said, “Now I know why you had me drink it first!” This is one of the most iconic moments in the Indiana Jones series as Walter Donovan drinks from a jewel studded, golden grail rather than the grail of the ‘penitent man.’ And since Indiana Jones is one of the most iconic action series of all time, this is among the greats of drink-gone-wrong scenes. He chose poorly.