After reading the autobiography of Chuck Yeager, I was impressed not only by his exploits, but by those of a lifelong friend and female pilot. Appearing on the list, she was a true pioneer and adventurer in a time when women were not welcome in a male-dominated field. Spanning almost a century, these women should be remembered for their determination, as well as their skill as aviators. 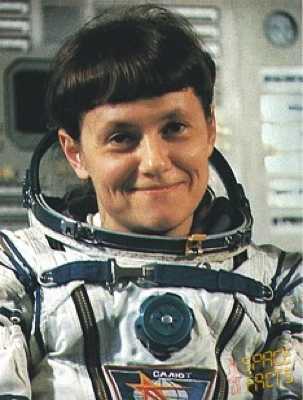 The first woman to walk in space, Svetlana Savitskaya was born August 8, 1948 in Moscow. She began parachuting at an early age, having made 450 jumps and setting a record for a 14km free fall before her 18th birthday. She attended the Moscow Aviation Institute, and went on to be licensed to fly 20 different aircraft. She set a woman’s speed record of 2,683 km/hr in a MiG-21. She joined the Soviet space program, becoming a cosmonaut in 1980. She became the second women in space, aboard Soyuz T-7, and then was twice stationed on the Salyut 7 space station. On the Salyut 7, she participated in the first spacewalk by a woman, lasting just over 3 and a half hours. She retired in 1993 from the Russian space program, having twice been awarded the title Hero of the Soviet Union. 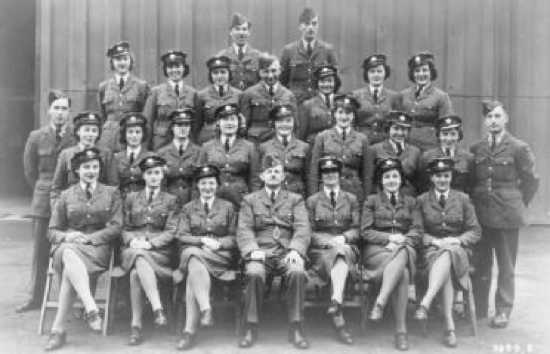 The United States Women Airforce Service Pilots (WASPs) and the British Women’s Auxiliary Air Force (WAAFs) were created to employ women pilots in roles that were traditionally occupied by men. The WASPs trained a total of 1074 pilots to fly planes between factories and air bases, freeing male pilots for combat and other military roles. They also flew cargo planes and towed target planes for target practice. Although civilian, they were trained to fly most of the military planes flown in WWII. Tragically, 38 WASP pilots were killed in training or active duty accidents, but did not receive military funerals. WAAFs, the British Women’s Auxiliary Air Force was composed of over 180,000 women at its peak. Women of the WAAF assumed flying roles in the Air Transport Auxiliary, as well as many non flying roles, including packing parachutes, radar and communications duties, as well as plotting and directing planes in the defensive Battle of Britain. 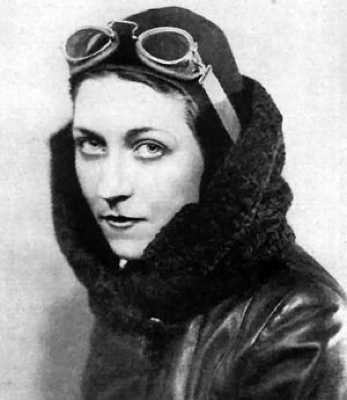 A British pilot, Amy Johnson earned her pilot license and ground engineer’s license in 1929. She began flying long-distance record-breaking flights shortly after. She was the first woman to fly from London, England to Australia solo, the first (along with Jack Humphries as co-pilot) to fly from London to Moscow, and set speed records for flying to Japan, and Cape Town, South Africa. During WWII, she joined the Air Transport Auxiliary (ATA), flying military planes to and from air bases, factories, and Maintenance Units. On January 5th, 1941, she was flying from RAF Prestwick in Ayrshire to RAF Kidlington in Oxfordshire when she was forced to ditch her plane in the Thames Estuary. She was off course, and out of fuel when she bailed out. There has been some controversy surrounding her death, including a claim that she was the victim of a friendly fire incident, and the theory that she was on a top secret mission when she crashed. The first ATA fatality in the war, her body was never recovered. 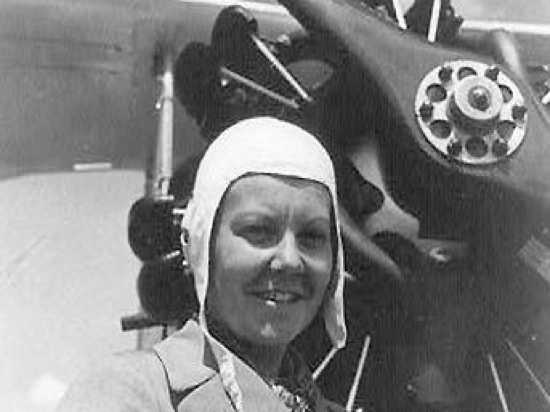 Sabiha Gokcen was the first Turkish woman to earn a pilot license and the first woman in the world to fly a plane in a combat role. She learned to fly at Turk Kusu, a Turkish Civilian Aviation School, and then received advanced training in Russia. She flew bombers for the Eskisehir First Aircraft Regiment, flying combat missions in the Dersim Rebellion in 1937. In 1938, she was appointed Senior Instructor of the Turk Kusu School of Aviation, a position she held until 1955. The Sabiha Gokcen International Airport in Istanbul is dedicated to her. 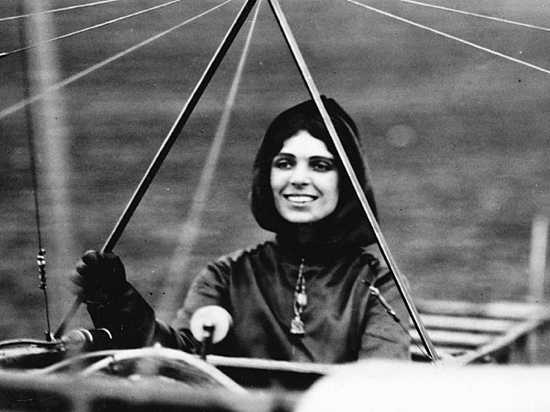 Harriet Quimby was the first woman to earn a pilot license in the United States, in August 1911. A journalist and screenwriter, she became a minor celebrity and was extremely influential to other women in the early days of aviation. Her flying career, although brief, was highlighted by a crossing of the English Chanel, the first woman to do so. On April 16, 1912, she flew a 50 HP monoplane from Dover, England to Hardelot-Plage, Pas-de-Calais. Her achievement was overshadowed by news of the sinking of the HMS Titanic the previous day. On July 1st, 1912, she was killed while flying in an airshow in Massachusetts. Quimby and her passenger fell to their deaths after the plane went into a steep dive, throwing both of them from the plane. 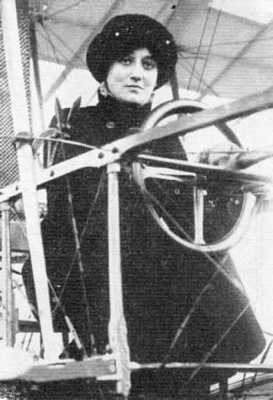 Raymonde de Laroche was the first woman in the world to earn a pilot license. She was awarded license number 36 by the Federation Aeronautique Internationale, on March 8th, 1910. Competing in the Coupe Femina, she won the 1913 award with a flight of over 4 hours. She set two world records in 1919 for longest flight by a woman, with a distance of 201 miles, and for reaching an altitude of 15,700 feet. On July 18th, 1919, she was killed while flying in an experimental airplane when it crashed while trying to land. 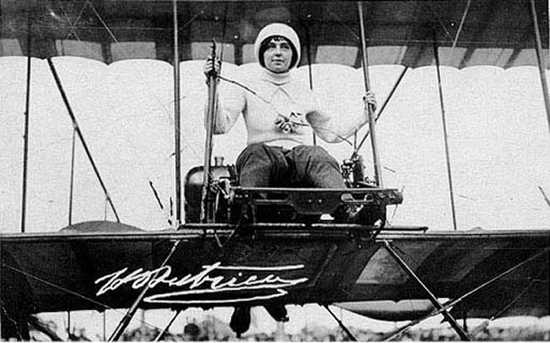 Helene Dutrieu was a daredevil from an early age. She began racing and performing stunts in bicycles, motorcycles, and cars. Her first attempt at flying was less than successful, as she crashed her plane on take off. She was able to fly solo some time later, and earned her pilot license from the Aero Club of Belgium on November 25, 1910. Only the fourth woman in the world, and first Belgian women to earn her license, she quickly began setting records for altitude and distance. She was the first woman to fly more than an hour, and the first women to fly with a passenger. In 1910, with a flight time of 2 hours 35 minutes, she won the Coupe Femina, a competition that awarded 2000 francs to the woman with the longest flight-time by the end of the year. For her aviation achievements, she was awarded the LÃ©goon d’Honneur (the French Legion of Honor). 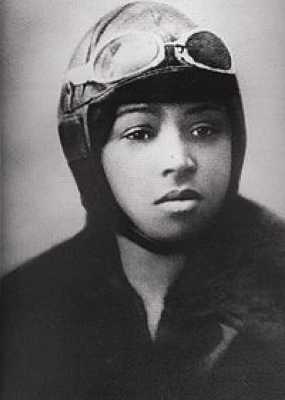 Elizabeth “Bessie” Coleman, an African American, overcame many challenges on her way to becoming the first African American woman to earn a pilot license. The first African American female pilot, she was unable to gain admission to flight schools in the US, so she learned French, and then traveled to Paris to learn to fly. She earned her license on June 15, 1921, and then returned to the United States where she earned a living performing stunts and demonstrations at air shows. A champion of equality, she fought to break down racial barriers in the segregated south, requiring equal facilities for her air shows. Although she died in a plane crash in 1926, her life was seen as an important first step in breaking the racial and gender barriers in the early days of aviation. 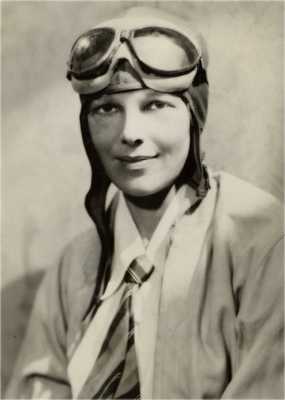 No list of women pioneers of aviation would be complete without Amelia Earhart, one of the the most famous pilots of all time. She was only the 16th woman to earn her pilot license, receiving it on May 15th, 1923. She became the first woman to fly across the Atlantic Ocean as a passenger, becoming a minor celebrity in the process. She then set a record as the first woman to fly across North America and the first woman to fly solo non-stop across the Atlantic. As her fame grew, she began setting other records for aviation, setting her ultimate goal of circumnavigating the globe. Although she wouldn’t be the first, her plan was to fly the longest route around the world. Her first attempt ended when she crashed on take-off, with some claiming pilot error. Her second attempt ended with one of the greatest mysteries of the 20th century. Flying west to east, she began her trip with a flight from Oakland, CA to Miami, FL. On one of the last, and most difficult legs of the trip, the plane disappeared on the approach to Howland Island in the central Pacific. Many theories and controversies surround her disappearance. 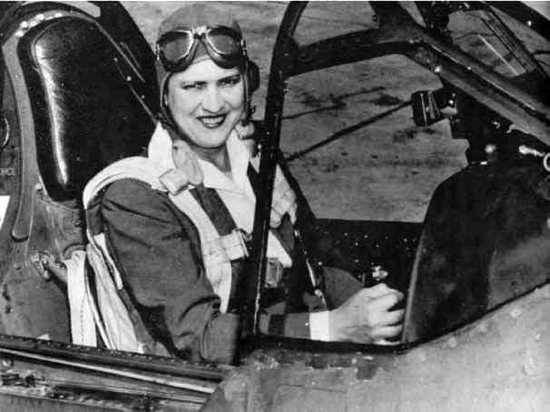 Jacqueline Cochran, the inspiration for this list, earned her pilot license in 1932. A natural pilot, she first used her love of flying to promote “Wings,” her own line of cosmetics. In 1934, she began racing and was the first woman to fly in the Bendix Race, which she won in 1937. A point to point race from Los Angeles, CA to Cleveland, OH, she received $9000 in prize money. Before the US involvement in WWII, she proposed a program to allow women pilots to staff non-combat duties, similar to the British Air Transport Auxiliary (ATA). This proposal lead to her becoming the director of the WASPs. She was awarded the Distinguished Service Medal and the Distinguished Flying Cross. A lifelong friend of Chuck Yeager, she was the first woman to break the sound barrier, with Yeager flying in the chase plane. She went on to set more speed, altitude, and distance records than any other pilot, male or female, holding them until her death in 1980. No other woman, and very few men were as influential to the era of modern aviation.