Some animals have great PR departments. We love to love them. They’re soft, and round, and cuddly. They have sweet little waddle walks and cute, smiley faces. We read about them in children’s stories. Unlike most of the rest of the animal world, they don’t want to eat, sting, poison or crush us. They’re our little friends who can’t answer back.

Don’t be fooled. Off the public stage, some of the cutest animals you know have habits worse than your college roommate.

People have been known to use some strange ingredients in perfumes and colognes, but goat urine isn’t one of them. Mr. Billy Goat Gruff, however, begs to differ on the subject of how sexy his pee smells.

In C. Dwyer’s hints on Sheep and Goat Behavior, published by the Centre for Agriculture and Biosciences International, you can learn how they will spray themselves lavishly over their faces, stomachs and forelegs prior to mating.

He speculates that, “Male goats urinate on to their bellies, legs and beards where the scent may serve to advertise their dominance status.” Or maybe they just like the smell? So if you see a goat doing this, don’t think it’s crazy. It’s just getting in the mood.

In fact, male goats are just urine mad. They love the smell and taste of nanny goat pee too. The handy Goat Handbook, written by Ulrich Jaudus and Seyedmehdi Mobini, tells us “If she is in heat she will tolerate the rather rough caresses of the male. He smells or tastes her urine…” This may be a way of telling if the female is fertile. Or male goats could just be kinky.

Mountain goats have a pretty good life. Lots of fresh air, plenty of grass to eat and clear streams to drink from. Their diet lacks only one thing: salt. So if a mountain goat finds a reliable source of salt they will go crazy over it. Like cattle, they will seek out and lick any rock or piece of ground that’s a little salty.

Unfortunately for mountain hikers, human urine contains just the kind of tasty salt they’re after. Goats are pretty smart too, so once they learn that people pee tastes good, they will stake out campsites and stalk men who appear to be stopping and opening their flies.

Attacks, where the goat gores the victim with its horns, are not unknown. The Olympic National Park in the US even has an action plan: “Most notable are the many areas where mountain goats are habituated to human presence have also become conditioned to seeking salts from humans. They can be a nuisance along trails and around wilderness campsites where they will persistently seek salt and minerals from human urine, packs and sweat on clothing. They will often paw and dig areas on the ground where hikers have urinated or disposed of cooking wastewater and chew unattended clothing.” No, those goats are not just being friendly. 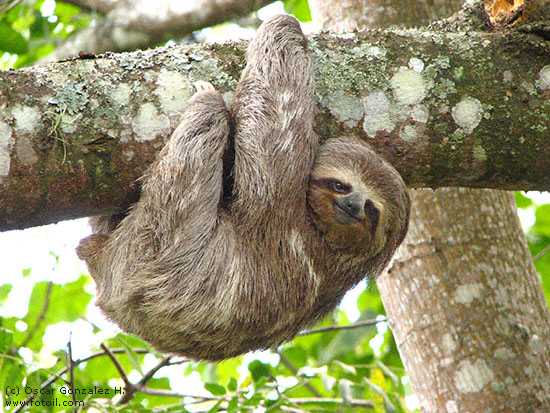 Let’s move on from urine – to poop. Sloths are among the most harmless and slow animals, too slow to eat anything much except very bland and boring vegetation. But two-toed sloths have added a new and tasty item to their diet: human excrement.

Biologists working at the Estacion Biologica Quebrada Blanco research site in Peru have recorded 25 separate incidents of these sloths descending from trees at night in order to feed from the latrines.

The scientists are confused as to exactly why the sloths have adopted this behavior, although it’s true that, like all poop, human poop still contains some nutrition. The other big plus point for the sluggish sloth is that it lies very, very still.

Okay, we all know that real hippos are a far cry from the lovable, cuddly, smiley toys we had as children, and that in fact they’re ruthless killers. People who know lots of useless information will happily tell you that hippos kill more people than sharks, tigers, crocodiles, or many other supposedly more dangerous animals.

This is all true, but another thing to bear in mind is that, if a male hippo backs out of the water towards you, you might want to take cover. They have rotor-mixer tails that can, and definitely will, spray their poop as far and wide as they’re able.

Why do they do it? Well, it’s a bit like a bird singing to let other birds know it’s available. Only not so pleasant. 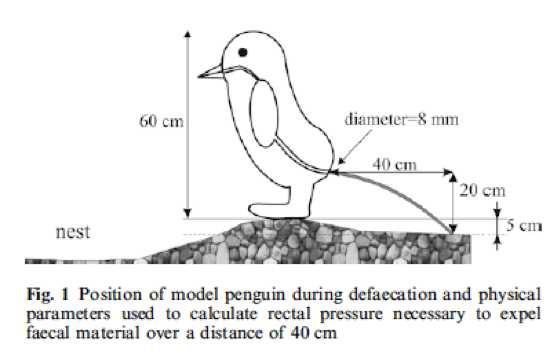 When your diet consists of fish, fish, and a bit more fish, the sensible bird tries to get the heck as far away from its droppings as it can. Adele Penguins achieve this by ejecting their poop explosively. There’s even a picture in case you had difficultly imagining that such a cute little bird could do something so disgusting.

Researchers Victor. B. Meyer-Rochow and Jozsef Gal believe the birds do it to avoid soiling their plumage. Like good scientists, they also address the wider question of whether the birds care which direction they poop. “The forces involved, lying well above those known for humans, are high, but do not lead to an energetically wasteful turbulent flow. Whether a bird chooses the direction into which it decides to expel its faeces, and what role the wind plays in this, remain unknown.” 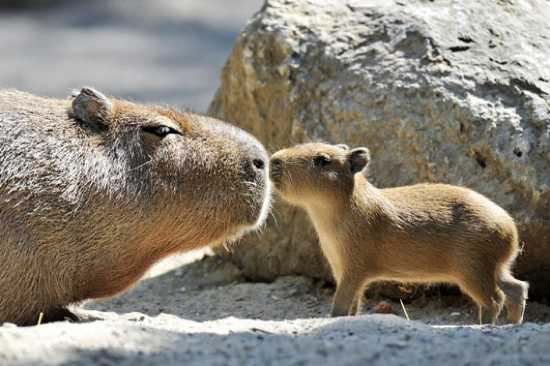 Capybaras are the largest rodents in the world, and equally cute to boot. They live in dense forests and savannas in South America, always near large bodies of water. They eat grass, bark, aquatic plants and fruit, and they love their food so much, they want to eat it twice. Yes, capybara are incorrigible poop-eaters.

They are discerning about their poop diet, though. They produce two types of poop. The soft, green excrement still has some nutrition and is good to go. The harder, darker kind ranks quite low on the capybara poop tastiness scale and gets left to rot. 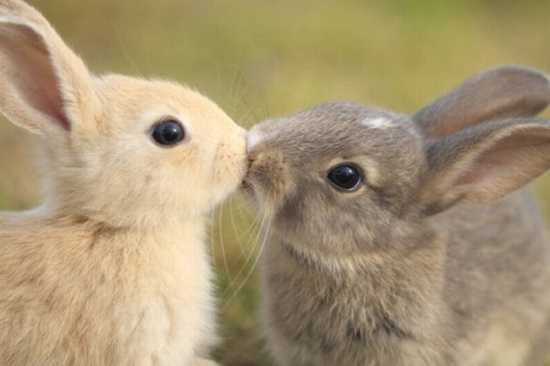 Capybaras aren’t the only members of the Feces-Appreciation Society, though. Several other related animals believe poop to be haute cuisine, not least of which is the humble, gentle sweet-natured rabbit. Thumper may have taught Bambi a trick or two, but let’s be thankful he wasn’t in charge of getting dinner ready. While capybaras will only eat the right kind of poop, rabbits will eat whatever kind of poop appears from their rear-ends.

Like capybaras, they produce hard and soft poop. Unlike capybaras, during the daytime they will eat the hard poop too. Hirofumi Hirakawa published this finding in Mammal Biology in 2001. Rabbits could be eating the hard poop because there’s still a little nutrition to be got out of it. Or it could be just because they like the taste.

Elephants are mostly famous for being adorable. Who couldn’t love their huge, floppy ears, stubby legs and wriggly trunks? If you want to maintain this image of elephants, do not watch the clip above, or read any further. No, that apparently is not a bizarre sexual ritual, that is one elephant taking the most direct method of getting another elephant’s poop to eat. Why he is doing this is between him and his psychiatrist. 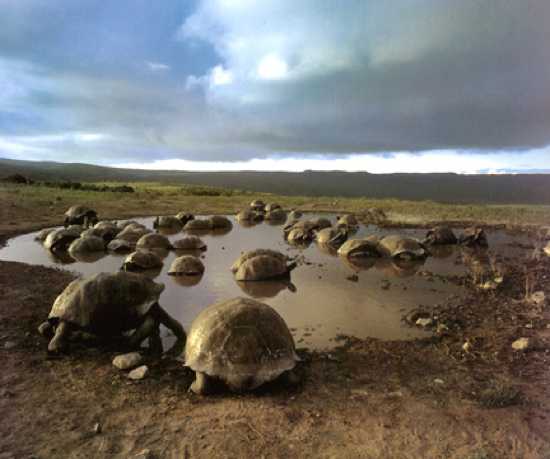 Tortoises are the sweet old gentlemen of the pet world. With their slow-moving gait and wrinkly faces you might think they’re easy prey out in the wild. But in fact tortoises are expert desert survivalists. And they have a hidden weapon in case things get extra tough.

The defensive item in their survival pack is their bladder, which, for a beast its size, is massive. A desert tortoise can hold over forty per cent of its body weight in its bladder, according to the U.S. Nevada Fish and Wildlife Office. The tortoise stores water against times of drought, as well as urea, uric acid, and nitrogenous wastes.

If the tortoise is attacked, it proceeds to unleash the power of its pee all over its attacker. It will also do this if it feels under threat. For instance, from a passing human. You have been warned. 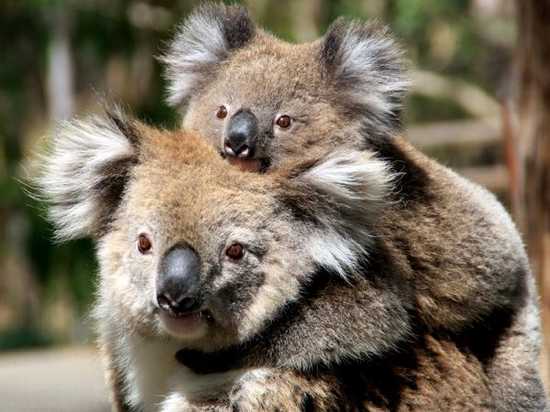 Australian wildlife is out to get you. That’s a well-known fact. Sharks, snakes, spiders, poisonous jellyfish and saltwater crocodiles all live there and they all, every single one of them, have one common purpose – to kill you. Even kangaroos will beat you up and rip you open.

The one famous exception to this rule is the koala. It’s soft and furry. It’s mild-mannered. It clings to trees like an over-sized, big-nosed, hairy baby. When it’s awake it’s a harmless vegetarian, munching nothing but eucalyptus leaves. But most of the time it’s passed out, sleeping off the effects of its nearly indigestible diet.

And of course if adult koalas are cute, baby koalas are cute times ten. Not only are they as soft, furry, slow and sweet as their moms, they come in mini-size! Ever wondered just exactly what baby koalas eat, though? Those leaves look pretty tough for a tiny tummy, right?

The truth is, baby koalas harbor a terrible secret. When they’re too big to drink momma’s milk anymore, and they have to transition to their leafy diet, they can’t do it all by themselves. They don’t have the right bacteria in their gut.

So where do they get those bacteria? Well, there happens to be a source very close at hand. Momma. But how do you get bacteria from one gut to another? A sweet little peck on the lips? Maybe, yeuchhh, eating their mom’s vomit? No, sorry, it’s worse than you think.

Koala babies wean themselves by licking a specialized feces from their mother’s anus. Keith Minchin, koala farm owner and author of Weaning of Young Koalas reported in 1939: The baby was forcing its nose into the mother’s cloaca [and] energetically eating the substance from [her] rectum.

So if you ever get the chance to cuddle one those sweet little babies, you might not want to get too close to its mouth.