When you’re sitting in a darkened theater packed with other people watching a movie, its pretty easy to get caught up in everything. For those few hours where you’re stuck in your seat, you might even forget what you’re watching isn’t real. That of course, is a good thing. It’s the main goal of almost anyone who works in cinema.

But I’m here to completely shatter all of that nonsense. While the magic behind your favorite movies is rather impressive, it gets so much more amazing when you really know what’s going on behind the scenes. When you can fully understand just how much work goes into your favorite movies, the magic behind it all becomes that much more entertaining.

10
The Work That Goes Into A Logo Yes that is a lion, and yes there are two guys just sitting there with it like it’s not an insane thing to do. Why would they do something so ridiculously dangerous you might ask? Because they’re Metro-Goldwyn-Mayer and they need a totally freaking awesome logo for their production company! Over the years there have been a lot of rumors about this lion. If you believe the internet, then this lion ended up killing it’s trainers right after this photo was taken. In reality however, MGM had to do this with seven different lions over the decades. And not once was anyone ever attacked. 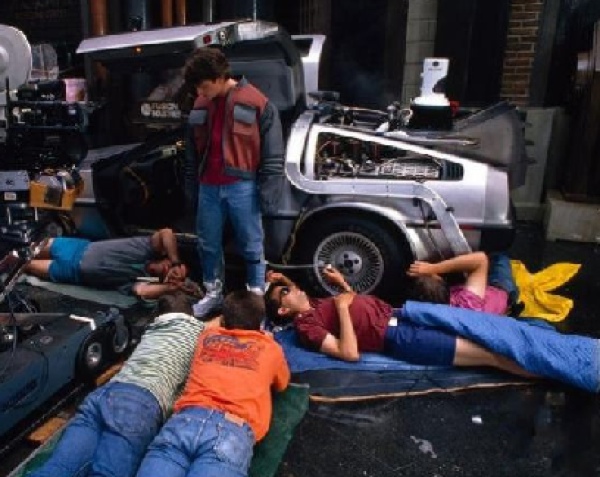 If for some reason you thought working on animatronics was an easy job, I present to you the self fitting jacket from Back to The Future Part 2. Not exactly self fitting once you see the full picture. What are those five people laying down on the concrete for? Well, the self fitting jacket was actually filled to the brim with wires. Each wire moved a part of the jacket of course, but here’s where the really hard part comes in. Each person on the ground had to pull their strings with perfect timing or the effect wouldn’t be smooth enough for the shot. So they laid there all day until they got it just right. Who said pulling an actor’s strings was easy? The Avengers released earlier this year and made something in the neighborhood of a billion dollars more than their budget. With a budget of $220,000,000 however, you’d think some of the most advanced CGI technology ever would have gone into making the movie, so why exactly is Chris Hemsworth beating up that poor under-dressed mascot? Well that really is what it takes when you use some of the best CGI tech in the business. To get Hulk’s massive size to translate onto the big screen, they had to have some poor guy walk around in that foam prison for most of the movie’s up close fight scenes.

7
Cage: The Man Of Steel Consider this one a behind the scenes of the stuff that goes on behind the scenes. That is Nicolas Cage as Superman. Yes, for real. He wasn’t just dressed up as Supes for fun. In fact, he was actually a heartbeat away from playing the Man of Steel in a Tim Burton directed movie. As you can see from the picture above, things were going so well that they already had Nic suited up and ready to go. So why aren’t we in a dystopian future where Nicolas Cage really was Superman? Well, production happened. The script had so many rewrites that the film wasn’t ready to film until four years past the estimated release date. Warner Brothers was $30,000,000 in the hole and just decided to can it. 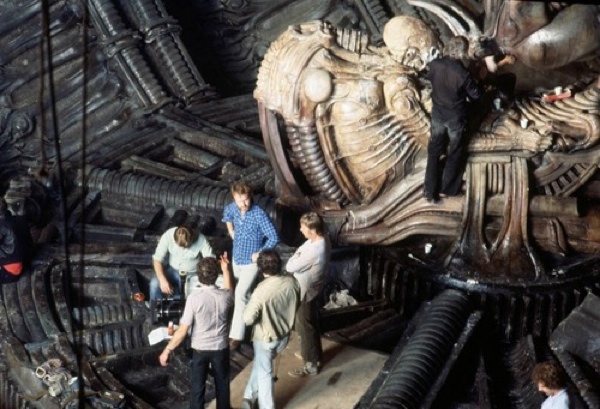 Now that we have computers capable of building entire worlds out of a green cloth hung up in the background of a shot, its easy to forget just how impressive set pieces really were before computer generated images took over the market. What you’re seeing there is the corpse of a Space Jockey in the movie Alien. As you can very clearly see, that thing is huge. Teams of artists slaved away for weeks building it specifically for this movie… and yet it only appears for a few minutes. Sure, all of that work was worth it, but think about just how much man power went into that one piece so you could enjoy the movie a little bit more.

5
CGI Can Be Amazing Too 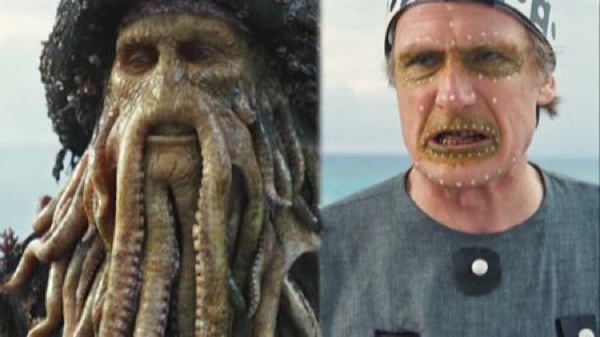 When I was watching Pirate’s of the Caribbean: Dead Man’s Chest, I knew Davey Jones’s face and claw were done with CGI. What I and most other viewers didn’t realize however, was the fact that Davey Jones was entirely CGI. From head to toe, Davey Jones is actually just Bill Nighy in a rather silly looking gray suit with marker ink on his face. But the CGI was done so well that you wouldn’t know it while watching the film. And a hats off to the actors as well. Just try to pretend one of your family members is a squid monster for a bit. Of course you’ll have to dress them up like Bill Nighy beforehand. Good luck. 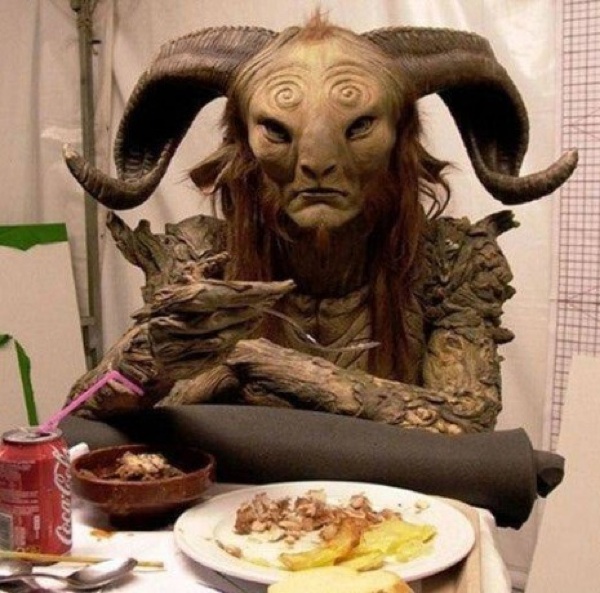 As you saw just a bit ago, CGI can be done so amazingly well that you won’t be entirely sure that it even is CGI until some jerk on the internet shows you. But there are also times when the makeup work on a movie is so insanely impressive that you might actually mistake it as CGI, as seen in the Guillermo del Toro film Pan’s Labyrinth. Doug Jones, known primarily for being able to stand around for a really long time while people cake him in pure special effects played both the Faun and the Pale Man in the movie. Almost everything you see in the movie was achieved with nothing more than makeup, prosthetics and a lot of early mornings. Even now it is hard to believe just how amazing it is.

3
Cage Will Not Be Outcrazied 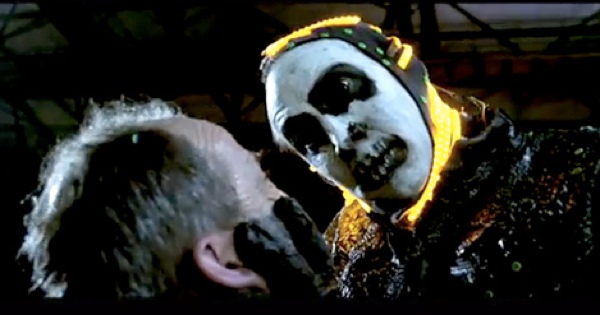 Where do I even begin with this one? What you’re looking at is what can best be described as hopefully Nicolas Cage while filming Ghost Rider: Spirit of Vengeance. I would like to point out the only thing needed during the filming of the movie were the lights attached to his head. Everything else is 100% Nic Cage. Why exactly did he dress up in such a way? Well, Nic claims the makeup was that of an ancient shaman. It made him feel empowered and more like the Ghost Rider during scenes. And why is he wearing a bedazzled jacket? Those are actually different minerals and talismans that he personally sewed into the jacket to give him more power during filming. This is actually how he looked during the different Ghost Rider scenes. Give this man all the awards.

2
Luke, I Am Your Father 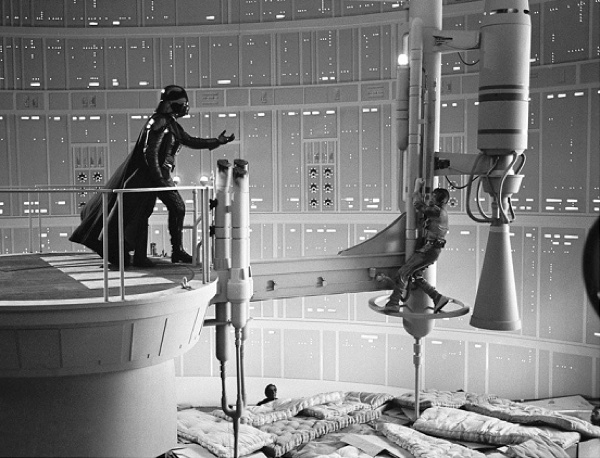 What you’re seeing here is easily one of the most iconic scenes in the entire history of the Star Wars series. Luke Skywalker has just lost his hand and learned the truth about Darth Vader. Spoilers, he’s Luke’s father. Shocked by this horrible truth, Luke Skywalker faces almost certain death as he falls about four feet into a pile of dirty mattresses. This is what the most memorable scene in nearly all of sci-fi history actually looked like. Not only does it look hilariously dirty down on the ground, it doesn’t really look all that safe either. They could afford to build that awesome set, but they kind of scrimped on the actual safety mats.

1
Death Comes For All Of Us 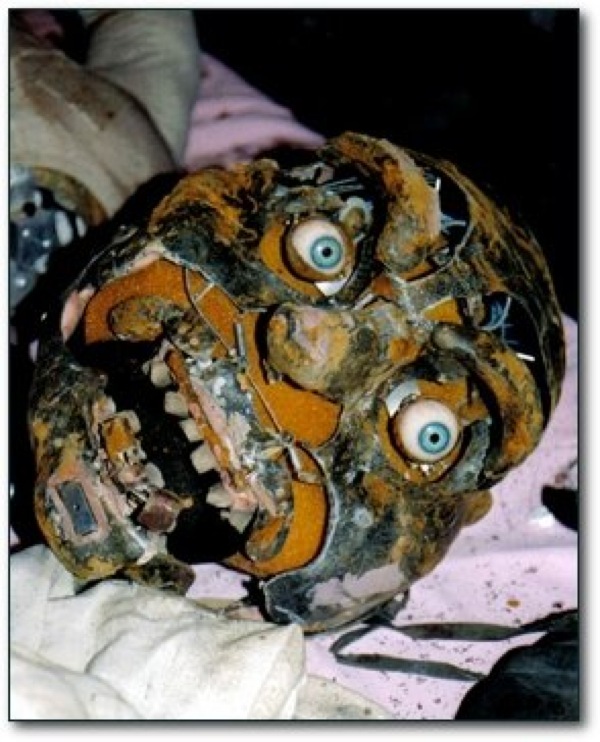 If you’re a fan of The Labyrinth then I must warn you. You really should have looked away about twenty seconds ago. What you’re seeing is the sick and twisted remains of Hoggle from the movie The Labyrinth of course. This is the true face behind the scenes of your favorite classics. But really, how did a Hollywood treasure end up like this? Sadly, Hoggle’s death was caused by lost luggage. Jim Henson would occasionally go on tour with his many puppets, and during one trip Hoggle was just lost with no way for Henson to get him back. He wasn’t found until nearly 20 years later. He has since been restored, but its too late. We’ve already seen his corpse. Rest easy Hoggle, and thank you all for reading.