There are no blank spots left on the map, no uncharted mountain ranges or unknown expanses of the oceans and seas. We’ve sent humans to all four corners of the globe and launched satellites above the sky to photograph the most remote and inaccessible areas of the planet. The explorers of old aren’t quite extinct, but they’re an endangered species whose native land is fast disappearing. And out of their death comes the rise of the modern explorer—pioneers and navigators who look inward to explore the sheer breathtaking limits of human potential. These men and women have inspired and amazed millions by showing us what humanity is truly capable of.

Wingsuit jumping is the sport of skydiving with specially designed suits that allow the wearer to glide, sometimes for miles, before releasing their parachute and drifting through the final descent. Gary Connery simply decided that the parachute wasn’t necessary anymore, and opted instead for a makeshift landing strip of stacked cardboard boxes.

At the age of 42, Connery has completed more than 1,350 jumps, and you’ve probably seen him dozens of times without realizing it. He has worked on over 100 films and TV shows as a stunt coordinator and performer, and stood in as a stunt double on films like Indiana Jones, Batman Begins, and the latest Sherlock Holmes adaptation. In other words, he’s the guy they turn to when Batman needs to act more like a superhero.

Geoff Mackley has made a career out of being in places where no human would ever want to be. He’s a photographer who has provided footage from more than 70 fatal natural disasters, including tsunamis, category 5 hurricanes, and blazing forest fires—when everybody else is fleeing for their lives, Geoff Mackley is elbowing through the crowds in the opposite direction, camera in hand.

In 2010, Geoff Mackley and his crew climbed into the crater of the Marum Volcano in Vanuatu—while it was erupting. They traveled down more than 500 yards (457 meters) below the rim of the crater inside heat-resistant suits to capture their footage while the lava bubbled and sprayed almost close enough to touch. And according to Mackley, they would have gone farther, but they “ran out of rope.”

Freediving is sort of like scuba diving, but without all those pesky oxygen tanks. Freedivers hold their breaths the entire time they’re underwater, usually while competing for distance or depth records. Sometimes that means holding your breath for 15 minutes or more, while swimming and experiencing extreme pressure changes on your body. Perhaps the most influential freediver is Guillaume Nery, who broke his own world record in 2006 for freediving to a depth of 109 meters below the surface (though the current record is 124 meters, set by Herbert Nitsch).

In 2010, Guillaume Nery dove Dean’s Blue Hole, which at 203 meters is the world’s deepest known underwater vertical cave. Because of its depth, it rapidly changes from aquamarine to near pitch black. The video above shows Nery gracefully floating down to the sandy seabed, then literally climbing hand-over-hand up the rock wall to get back to the surface.

At 27 years old, Alex Honnold is one of the most prolific free solo climbers in the world. “Free soloing” is the act of rock climbing without the use of a harness or a rope, and Alex Honnold takes it to an extent that would make any mother cringe.

On September 6, 2008, Honnold free soloed the Northwest Face of Half Dome, a peak in Yosemite National Park. The kicker: The distance from the bottom to the top of the cliff measures about 2,000 feet (600 meters) of vertical rock. And he did it without a single rope. 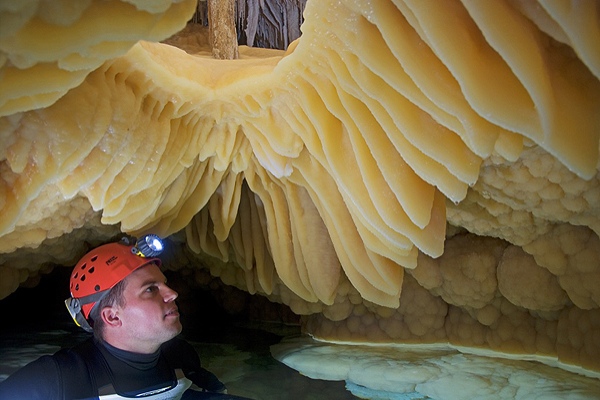 Spelunking, otherwise known as caving, is the sport of exploring underground caves. Like with any sport, there are hobbyists all the way through extremists, and Robbie Shone falls somewhere close to the extreme end of the scale. He’s traveled across the globe from Borneo to Papua New Guinea in an effort to find the most remote and bizarre caves, and he does it all while lugging along pounds of camera equipment, hoping to capture “the perfect shot.”

Between floods, falls, and cave-ins—not to mention losing your way in the subterranean maze—caving can be incredibly dangerous, but Robbie Shone takes plenty of precautions, despite climbing into some unusual vantage points to get a picture. And then there are unforeseen dangers, one of which Shone describes from a three month trip to Papua New Guinea: “During that trip I even had a leech stuck to my eyeball for a couple of days. We tried coaxing it off with some raw meat and salt.”

If you’re going to put years of preparation and training into breaking a world record, why not just break three at the same time? That’s apparently what Felix Baumgartner set out to do on October 14, 2012, when he broke the records for highest parachute jump, highest manned balloon flight, and maximum speed outside a vehicle—blasting through the sound barrier at Mach 1.25 (that’s 843 mph).

To be perfectly clear, Baumgartner’s record-setting jump took place from the stratosphere at 24 miles (39 km) above sea level—not space, which is officially set at 62 miles (100 km) up. However, the altitude (three times higher than commercial airliners fly) still required him to wear a fully enclosed pressurized suit to protect him from the thin atmosphere and freezing temperatures.

Dan Osman was one of the pioneers of the sport of free soloing, but he took it to an entirely different level. Not only did he make a habit of climbing hundreds of feet without the safety of a rope, he did it as fast as possible. The rock climbing documentary Masters of Stone IV shows Dan Osman speed climbing Bear’s Reach, a cliff face in the Lake Tahoe region of California.

In only four minutes and twenty-five seconds, Dan Osman scaled 400 feet (122 km) of vertical rock, at times leaping upward with nothing below him but air. Unfortunately, his thrill-seeking nature led to his death in 1998, when a rope snapped during a free fall in Yosemite National Park. He remains an inspiration to thousands of people and climbing enthusiasts today.

The Amazon River runs for approximately 4,000 miles, starting as a stream in the Andes mountains before running through some of the most dangerous and unexplored territory left on the planet. Eventually it builds into the widest river in the world, a roaring deluge 150 miles (240 km) across by the time it spits out into the Atlantic Ocean. In 2008, Ed Stafford began walking down the Amazon River and didn’t stop until two years later on August 9, 2010 when he reached the Atlantic, becoming the first person to walk the entire length of the river.

For supplies he carried rice and beans, picked up a few necessities as he passed through villages, and fished for piranha. Throughout the trek, the ex-stockbroker was faced with anacondas, crocodiles, tropical illnesses, and was even captured by a tribe of natives at one point—all while bringing global awareness to the deforestation of the Amazon forest. 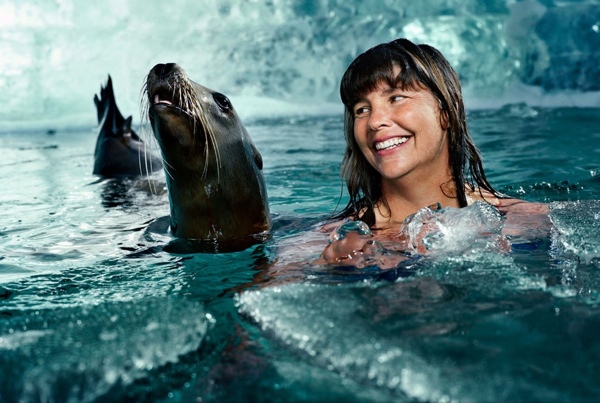 Lynne Cox swims like most people drive. She began to get attention in the 70’s for setting the speed record for swimming the English Channel—she held it twice in two consecutive years. In 1987 she became the first person to swim across the Bering Strait from Alaska to the Soviet Union, spending over two hours in the frigid water that averages 40 F (4 C)—on a good day. It was so cold, and over such a length of time, that she had to be enclosed in a heated chamber to bring her body temperature up to safe levels.

But then in 2003, Lynne Cox did something that made all of her previous accomplishments pale in comparison—wearing nothing but a swimsuit and goggles, she swam 1.22 miles (1.96 km) through the waters of the Antarctic, spending 25 minutes in water cold enough to kill a person after only 5 minutes.

Perhaps the most inspiring person on this list, Erik Weihenmayer is a mountaneer, skydiver, ice climber, distance biker, and skier—despite the fact that he lost his eyesight at the age of 13. In 1995 he climbed 20,320 ft. to the top of Mt. McKinley, and two years later he reached the summit of Mt. Kilimanjaro. In 2001, Erik Weihenmayer became the first blind person to climb Mt. Everest.

Rather than bask alone in his achievements, Weihenmayer works with blind teens in Tibet, leading them on small mountain climbing expeditions in a project called Climbing Blind. Now, he’s got his sights set on kayaking, training himself to guide the kayak based on the sound of the rapids and the feel of the flowing water beneath him in preparation for paddling the Grand Canyon.