The universe is full of tantalizingly strange places and things. But some of them are so extraordinary that they push the limits of everything that we thought possible.

From plasma waves that dance to tiny stars that put the Sun to shame with surprising power and real-life “water worlds” infinitely more extreme than anything dreamed up by Hollywood, these discoveries run the spectrum of the seemingly impossible. 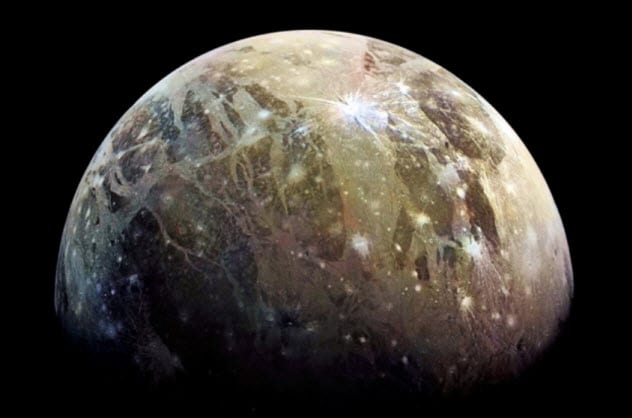 Space seems to be mostly empty, but there are loads of charged particles zipping about. And under certain conditions, they can “dance,” or move in rhythmic waves.

This is happening around Ganymede as particles are whipped by Jupiter’s magnetosphere, which is 20,000 times more potent than Earth’s. It’s amplified by Ganymede’s own magnetic field, creating an intense region of chorus waves, or low-frequency plasma waves. 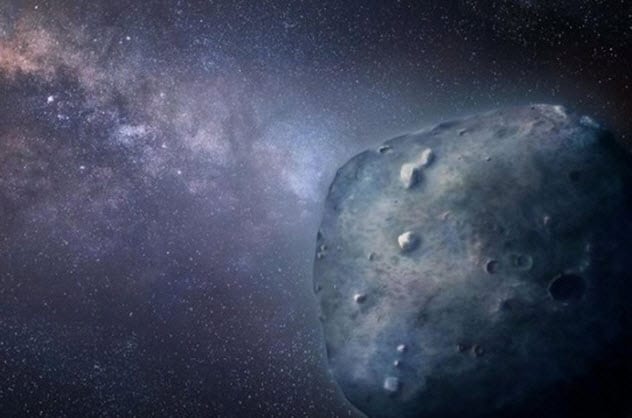 Asteroid 3200 Phaethon recently proved itself even weirder than astronomers had hoped. Phaethon is an anomalous asteroid-comet hybrid with an eccentric comet-like orbit that takes it from the Sun’s doorstep to beyond Mars.

It’s a bit lighter than charcoal, and it’s blue because it’s been baked at 815 degrees Celsius (1,500 °F). This baking action turns the 5-kilometer-wide (3.1 mi) asteroid into a molten wasteland that turns metal to “goo.”

To top it off, Phaethon potentially birthed the annual Geminid meteor shower that dazzles every December.[2] 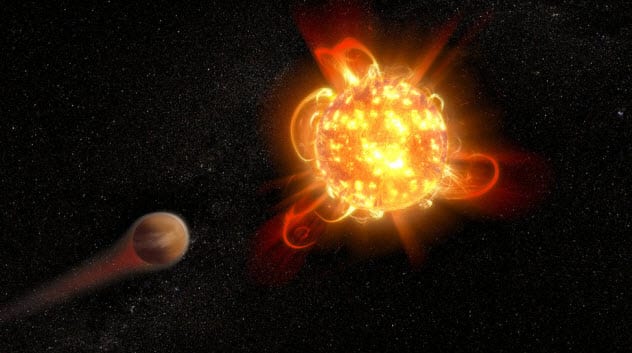 Three-quarters of our galaxy’s stars are red dwarfs, like our nearest solar neighbor Proxima Centauri. They’re only 7.5–50 percent the mass of the Sun, but they unleash much crazier, UV-heavy solar flares that our much larger star can’t match.

The strongest flares come from younger red dwarfs. The ones observed by Hubble were just 40 million years old and spewed flares 100–1,000 times stronger than their elders.

One event, known as “Hazflare,” was stronger than anything our Sun’s dished out in a century of observation. During that period, it only once or twice approached Hazflare’s enormous energy. And that was captured after a single day of red dwarf–watching, suggesting that these flares may occur daily or even multiple times a day.[3] 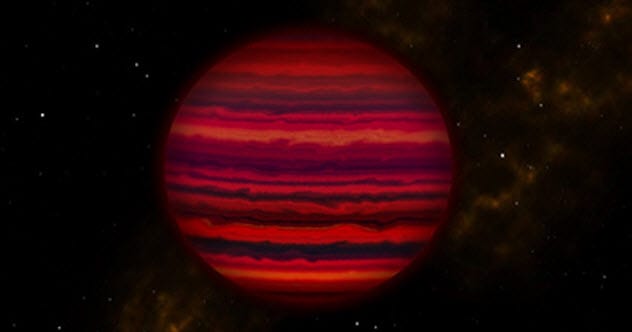 Brown dwarfs are failed stars that can be unbelievably cold—like WISE 0855, the coldest-known object outside the solar system. Located 7.2 light-years away, it’s -23 degrees Celsius (-10 °F) and five times more massive than Jupiter.

WISE 0855 is so cold that it’s at the threshold of visibility for the biggest infrared telescopes on Earth. And its discovery in 2014 made it the faintest thing ever discovered at that wavelength by ground-based spectroscopy.[4]

Though WISE 0855 may look like Jupiter, spectral analysis revealed a wet, cloudy world dominated by “water vapor and clouds.”

6 A Baby Star Enshrouded In The Building Blocks Of Life 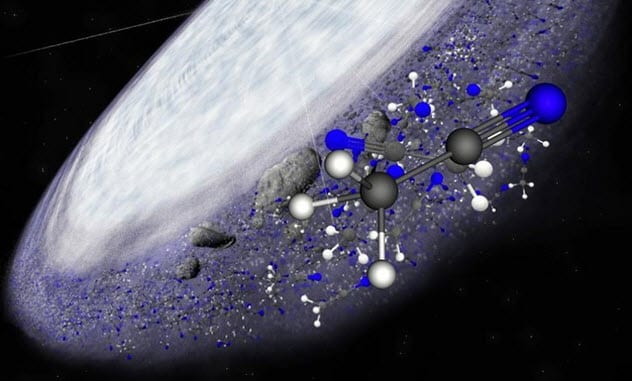 Most of the universe apparently lacks the conditions for life. But in 2015, astronomers found the first evidence of “building blocks” around the baby star MWC 480.

Located in Taurus, a vast star-birthing region 455 light-years away, MWC 480 is so young that it’s still in its bib—surrounded by a protoplanetary ring of dust and gas.

It’s grander than our Sun, shining 10 times as brightly at twice the mass. And its environment is rich with organics like methyl cyanide. With these complex elements present in interstellar clouds, this proves that these substances can survive (and in greater quantity) the formation of a solar system and that they probably surround other stars as well.[5] 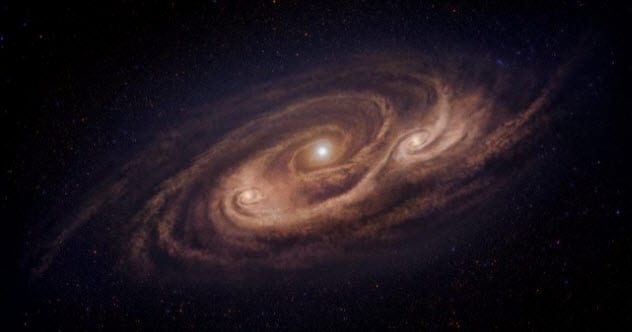 COSMOS-AzTEC-1 is a “monster” starburst galaxy at the edge of the universe, 12.4 billion light-years away. And it’s shocking astronomers with its stupendous rate of star formation, about 1,000 times greater than the Milky Way.

In birthing galaxies, gas collapses inward due to gravity, causing star birth. Then stars die, and the resultant supernovae create outward pressure, striking a balance between collapse and expansion.

But COSMOS-AzTEC-1 is unbalanced and unstable. Gravity is crunching the gas and causing an unstoppable runaway star formation effect in two massive debris clouds (unexpectedly) located away from the galactic center, where violent star birth usually takes place.[6] 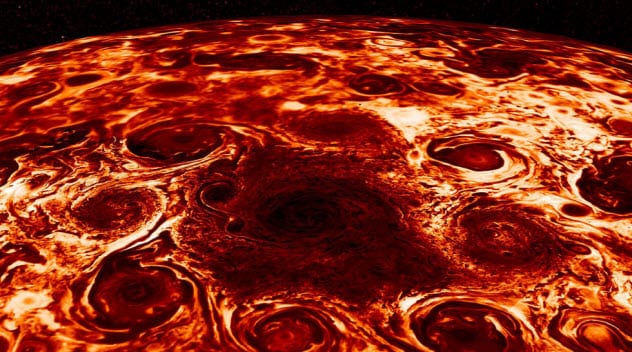 The billion-dollar Juno spacecraft has sent back a treasure trove of new Jupiter data, including images of tantalizing storms on the planet’s previously unexplored poles.

On the north pole, Juno’s infrared eyes spied a central Earth-size cyclone surrounded by eight smaller storms ranging in size from 4,000–4,700 kilometers (2,500–2,900 mi) in diameter and spinning at 354 kilometers per hour (220 mph). Juno found a similarly gigantic cyclone on the south pole, surrounded by five storms up to 6,900 kilometers (4,300 mi) across.

Mysteriously, these cosmic category 5 storms are not migrating across the poles or merging into larger vortexes, as would be expected from a gassy, rapidly spinning storm-ball.[7] 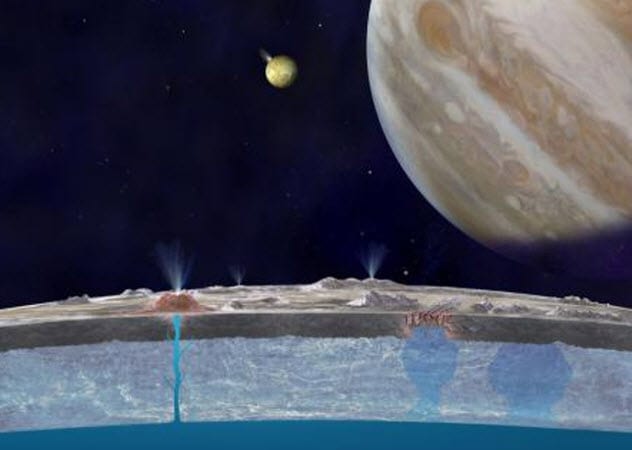 Jupiter’s moon Europa is arguably the best bet for finding ET. It was known that the Galilean moon hid a globe-encompassing, 100-kilometer-deep (62 mi) ocean beneath its crust. But now astronomers have evidence that the ocean exchanges chemicals with the surface as well as its sibling moon Io.

Spectrometry shows the unexpected presence of epsomite, a magnesium sulfate salt, on Europa’s surface. Its formed with the addition of sulfur, irradiated from the solar system’s most volcanic body, Io.[8]

The sulfur mixes with magnesium salts seeping from Europa’s ocean, making Europa an even richer, more Earthlike stew of substances than previously believed. 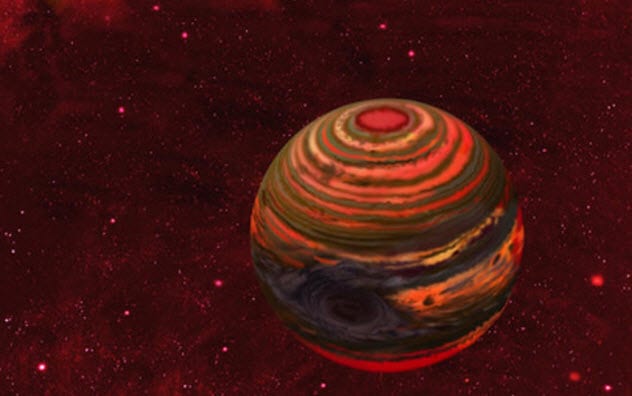 The brown dwarf 2MASS J21392676+0220226, 47 light-years away, is as unique as the tedious name suggests. In fewer than eight hours of observation, astronomers saw its brightness vary by 30 percent, unprecedented for a brown dwarf.

One explanation is that deeper, hotter layers are peeking through an atmospheric hole. However, according to researchers, the gnarliest, best explanation is that we’re seeing an otherworldly storm, a “grander version” of Jupiter’s triple-Earth-sized Great Red Spot.

And it’s deadlier, too. The turbulent storm clouds are made of rock and metal as silicates and metals condense and rain down on the failed star.[9] 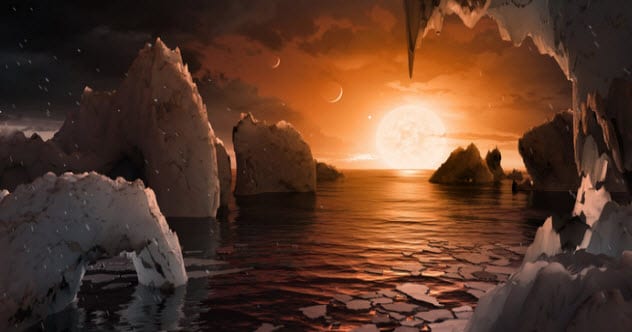 But it’s crazy outer space water. A layer of vapor surrounds the planet. Then, as you descend, you may encounter liquid oceans with consistencies dictated by insane pressures and temperatures that near 538 degrees Celsius (1,000 °F).[10]

Overall, 35 percent of the known exoplanets larger than Earth should be abundant with water. Many of them should also be up to 50 percent water weight, compared to Earth’s relatively piddly 0.02 percent.