Christian Marlberg is a freelance writer with an interest in travel, nature, and exotic food. His experiences include cooking with nettle, downing live ants & limpets, and picking wild onions. He is always on the lookout for quality fried eel.

When we consider our food, we rarely give it too much thought, and in fact, we sometimes note how ordinary it may be. However, there are some foods so unusual, and in fact horrific that they may simply remove any trace of an appetite. While past Listverse entries looked at some undoubtedly bizarre foods, this riveting account takes culinary cringing to an entirely new level. We will look at poisonous shark meat, neurotoxic fruits, and Bullfrog salad…. 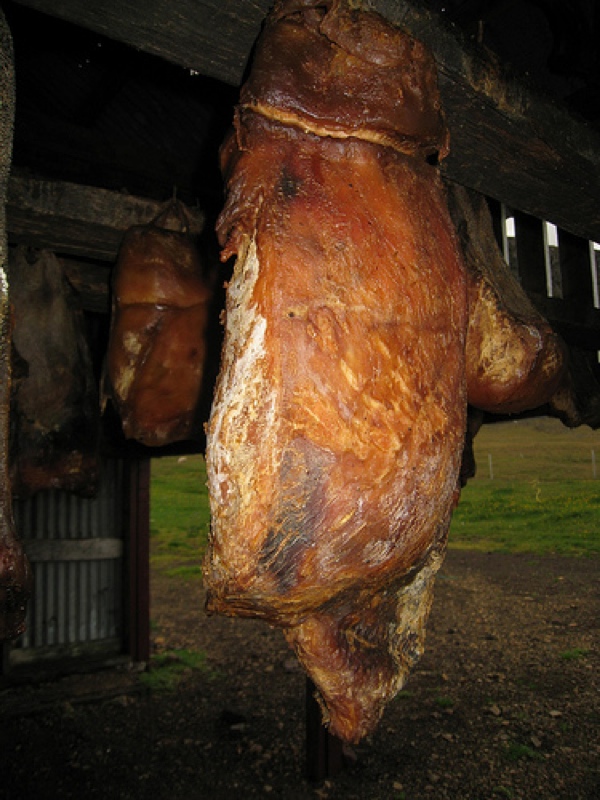 A previous list covered the dangers of Greenland Sharks to humans, including Inuit hunters who may be turned over in their Kayaks. However, a more subtle risk is posed by Greenland Sharks – to your palate, and health. Greenland Sharks lack the ability to urinate, causing massive amounts of ammonia and trimethyl oxide to instead be processed through the tissues of these sharks. The ever enterprising Greenland natives have devised a traditional meal known as Harkal, which is basically aged shark flesh. Not only is the smell of the shark flesh nearly unbearable, but the consumer faces potential organ strain, intoxication and sickness from the poisons still present in the flesh. 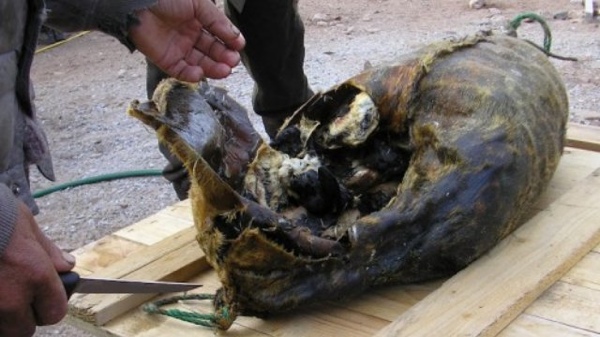 Kivaq is an extremely stomach straining and in fact dangerous food that completely tops any other bird based dish. The Icelandic heritage food known as Kivaq consists of the fermented (some might say decomposed) corpses of small marine birds related to puffins—murres, and gulls. The birds are captured with hunting nets, and sewn into aged sealskins before being buried underground for up to three years. The birds slowly marinate in seal oil in the cold arctic tundra. The resulting meal, when finally dug up, is not only somewhat repulsive, but in fact, may be deadly due to the potential for botulism. A famous research biologist’s last meal was Kivaq. 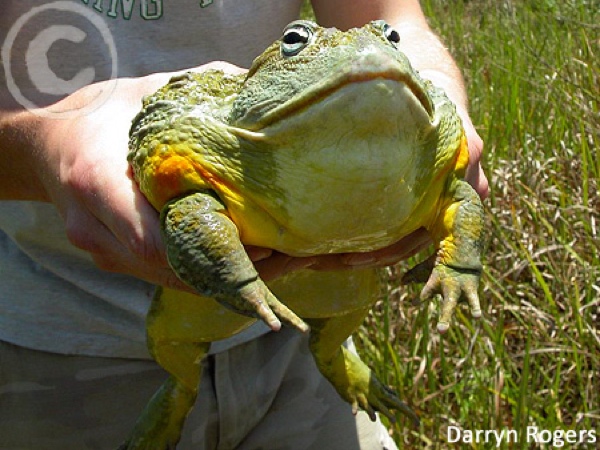 The African Bullfrog is disturbing to consider but it is classified as a delicacy in the African country of Namibia. However, bullfrog flesh is infused with the potent toxin known as Oshiketakata, which may lead to kidney failure, muscle damage and even death. Recommendations for processing the fickle frog meal include lining a pot with special wooden planks, which supposedly “neutralize” the toxin. The poison levels are reputed to be lower at certain times of year, which make the food acceptable to the brave, or maybe foolhardy, if combined with the wood planks. We cannot guarantee that the consumer will not croak…. 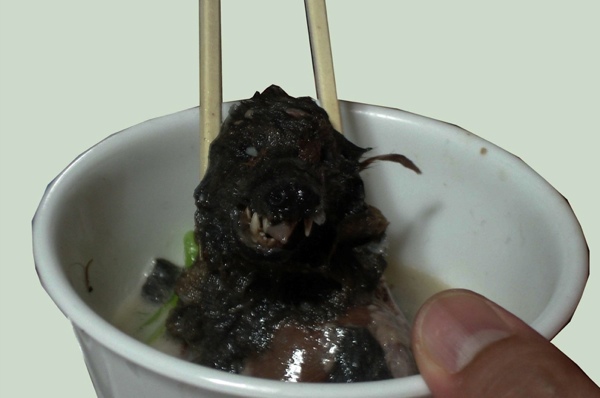 There are some foods which simply defy the imagination. Possibly the most counterintuitive food is Asian Bat soup, which contains an entire bat placed in a soup bowl after boiling with chicken broth. The bat is dissected with a knife and fork, and the broth is then eaten with a spoon, along with the innards of the bat. Hair is present in the dish, along with the membranes of the bat’s wings. The dish is rather delicious, but we are forced to conclude that it is very unappetizing to see an entire bat floating in front of us. The bats are also capable of carrying a number of human transmissible diseases, and the practice is considered unsustainable by many conservation organizations. 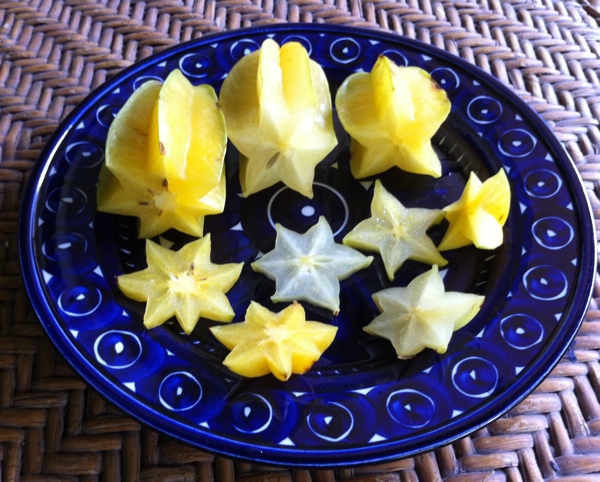 Star Fruit is the most seductive and innocent looking food on this list. While other dishes may be complex or disturbing, Star Fruit is simply beautiful. The Asian plant contains five huge ridges, which form perfect stars when the plant is served sliced crossways. After eating this plant, you may begin to see stars in your head due to the neurotoxins contain in the “fruit”. Star fruit also contains massive quantities of Oxalic acid, the same poison found in Rhubarb leaves. Star fruit may therefor strike down those with weak kidneys, leading to death in some notable cases. The author has personally sampled and prepared Star Fruit. The “bite” of the plant and sense that it was not meant to be eaten were strongly experienced. 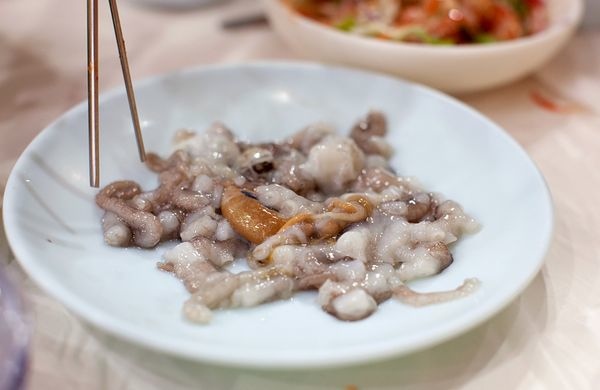 A number of exotic Japanese and Korean restaurants, including those seeking to appeal to western tourists are offering sushi that is not only raw, but partially alive. Miniature Octopus are brought into the sushi bars alive, and are quickly chopped in two pieces, leaving the writhing, reflex operated tentacles to be served on a plate with soy dip. Because the animal is an invertebrate with a partially de-centralized nervous system, the tentacles continue to grap, coil and squeeze as they are consumed. In several unfortunate and eerie cases, death has resulted from the disembodied tentacles conspiring to block the airways of diners. 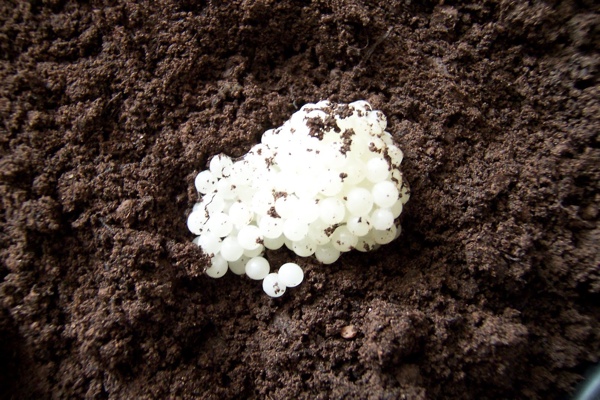 The sturgeon eggs known as caviar are a popular dish in Russia, while Escargot, or snails are a popular French Dish. Extreme delicacy entrepreneurs are popularizing a new dish known as “snail caviar“, which consists of the raw eggs of land snails themselves. The eggs are placed on hardboiled quail eggs, or served alongside roast vegetables and exotic salads. Coming neatly packaged in little tins, there is a catch to this marvelous condiment, which carries the taste of fresh Earth. The eggs cannot be cooked, and deaths have been documented from the consumption of raw snails infected with brain parasites. 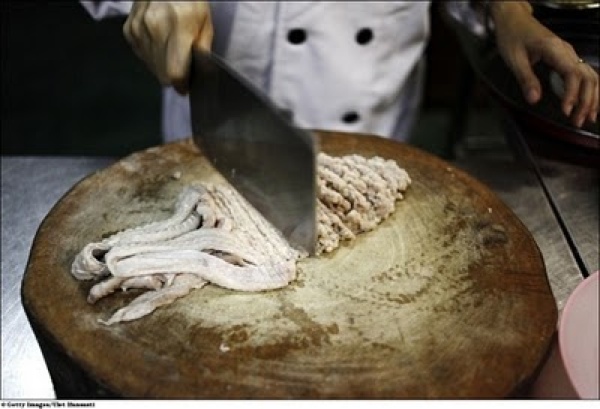 In the Southwestern US, Rattlesnakes are not only feared, but they are raised as food by specialty suppliers. Proponents of “rattler rations” note that snake flesh is biologically similar to Chicken, due to the reptilian ancestry of birds. It is a surprisingly Southwestern dish that makes a trip to the desert very….authentic…In southeast Asia, eateries are actively marketing their own snake snacks in the form of actual snake burgers, made from cobras and other snakes. Because Snakes are venomous, rather than poisonous, it is perfectly safe to eat snake flesh itself, as the toxin is not distributed through the tissues. After filleting and frying, you would never know you were not eating beef or chicken. 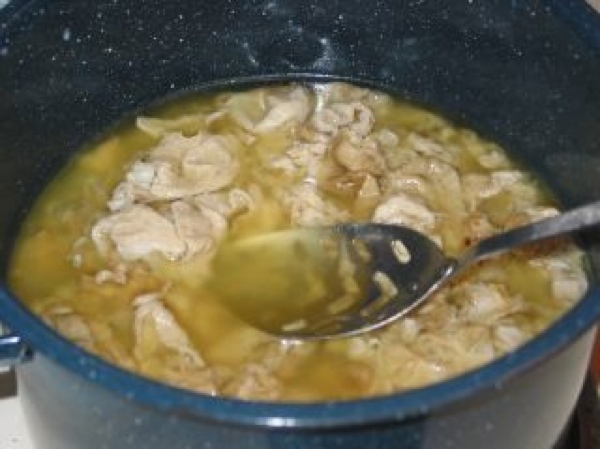 The insides of the digestive, reproductive and nervous system of certain animals forms the basis of some grotesque, but surprisingly popular dishes. A number of dishes feature the stomach linings, intestinal sections and even testicles of cows and sheep. The “trimmings” must be carefully cleaned due to the sometimes questionable body parts involved, but can be surprisingly flavorful to the strong-stomached diner. The lamb testicles are among the most popular, and are served breaded, while bull testes come marinated in sauce. In Europe, a most distressing food known as “chitterlings” may be served. The content is nothing less than pig intestines. Sheep’s heads and fish eyes also appear on “nose to tail” menus….Risks of deadly parasite infections have led to stronger regulations on the consumption of entrails and sheep heads. 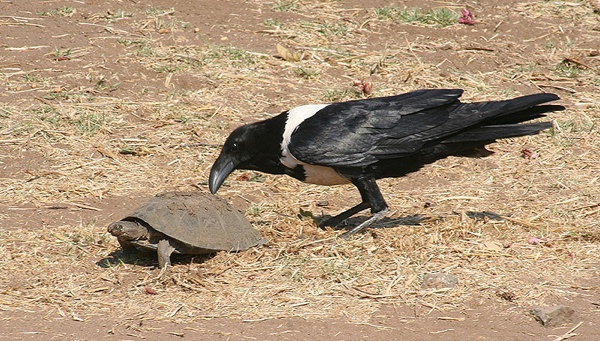 Telling someone to “eat crow” is not exactly far-fetched, or even insulting if you are in Lithuania. Crow Pie is a traditional bird based dish derived from the meat of Carrion Crows. The birds are hunted at a fairly young age, and cooked at a high heat in oil before being served on a plate of roast vegetables. The meat is rumored to act as an aphrodisiac, and ostensibly is used to “manage” crow numbers. Crows have served as a traditional component of Lithuanian food, but consumption declined sharply during Soviet occupation of the country. Crow hunters are pleased to re-vitalize the dish, and have driven hundreds of kilometers in pursuit of crow flocks. Concerns have been raised over the possibility of contracting diseases from these scavengers. Crow is not considered Kosher or Halal for these reasons.