Arthropods are incredible animals that include insects, arachnids and crustaceans. Together, they make up over eighty percent of all species on the planet so it is only natural that there are totally beautiful and bizarre examples of these creatures. This list will detail the ten strangest arthropods on Earth. 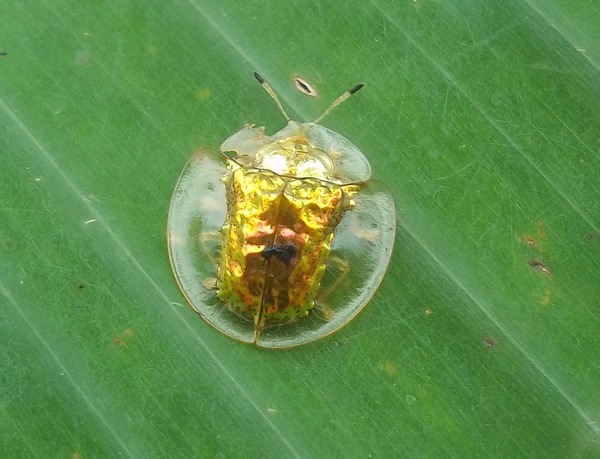 The magnificent golden tortoise beetle—Charidotella sexpunctata—is commonly found in eastern North America and measures five to seven millimeters in length. The beetle has an extraordinary golden hue but it can change its color as well—transforming its outer covering so it becomes transparent. This color change reveals the rest of the beetle underneath, which is black with red spots, like a ladybug. Once these beetles are collected and removed from their natural habitats, they quickly lose their color, turning mud brown. This is because they lose their liquid layer, which is formed by dew on the leaves they live on. This liquid layer gives the illusion of a golden color.

The beetle larvae of this species are also quite interesting. They have a dark, spiky appearance and as they shed their skin, part of it is left behind. The larvae then add their own feces to this, forming a fecal shield for protection against predators. When they are disturbed, they will flip open this shield and hit the predator. You can see the larvae and fecal shied in this video [http://www.youtube.com/watch?v=_BDxjUfyVEA]. 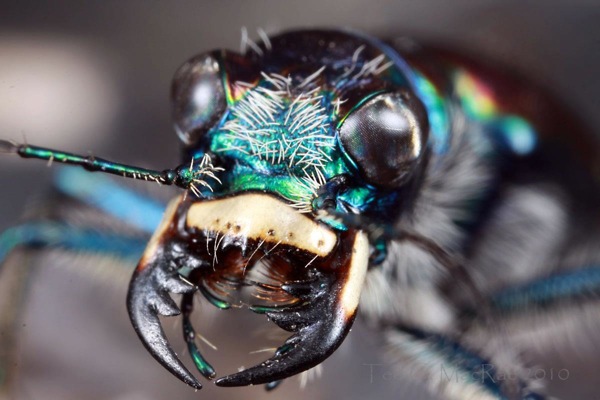 Native to Australia is the super fast species of tiger beetle—Cicindela hudsoni—which is the fastest animal on the planet in relative terms. The beetle reaches speeds of up to 5.6 miles per hour or 2.5 meters per second. This is the equivalent of a human running at 480 miles per hour! At full speed, the beetle loses its sight so it has to run in small bursts when hunting prey.

The tiger beetle is a very aggressive predator and its speed—along with its huge, powerful jaws—allow it to catch and kill small insects and spiders easily in its desert environment. The beetle larvae are equally deadly and they bury themselves in the ground. When small prey pass by, the larvae jump out of their hiding place and capture them with their huge jaws. The prey is then dragged into the hole and devoured. However, there are problems with this type of predation. If a wasp disturbs the larvae nest, it will dodge out of the way and avoid being eaten. It will then burrow into the nest and paralyze the larvae before laying eggs inside the victim. Then the wasp seals the nest entrance. The wasp eggs hatch inside the larvae and gradually eat it until they burst out of the skin to continue their life cycle. 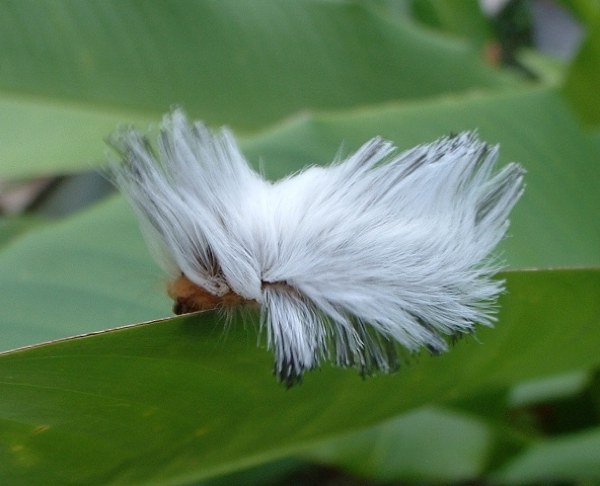 A species endemic to North America, the asp caterpillar—Megalopyge opercularis—looks quite harmless. However, it should be treated with extreme caution as it has very powerful venom and is one of the most toxic caterpillars in North America. At the end of the fluffy hairs lie sharp, poisonous spines which pierce the skin and can cause extreme allergic reactions such as inflammation, blisters, headaches, nausea and breathing difficulties. These symptoms can last for days.

Many cases of injury have been reported in the United States over the years—the injuries occur mainly in children as they try to pick up these creatures. The asp caterpillar grows to two centimeters in length an the adult is the crinkled flannel moth, which also has a bizarre, yeti-like appearance.

The thorn bug—Umbonia crassicornis—is so-called due to its enlarged pronotum which in most species resembles thorns. However, this feature varies considerably throughout the different species of thorn bug. This adaptation has developed to protect the bugs against predators, mimicking the thorns on the plants they thrive on. The thorn bugs pierce the plant stems with their beaks, feeding upon the sap inside. There are many species of thorn bugs that are found all over the world and they have been around for almost forty million years. The most common and widespread species is Umbonia crassicornis and it is found in Florida, Central America and northern South America. They can grow to 10 millimeters in length. 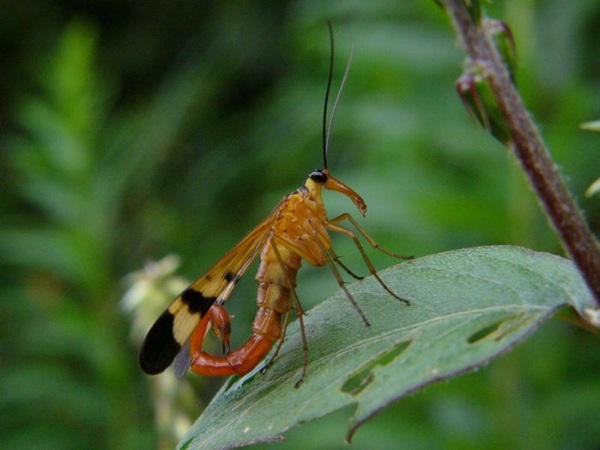 The common scorpionfly—Panorpa communis—is native to western Europe and feeds on dead or dying insects, nectar and rotting fruit. They have also been observed stealing insects from spider’s webs. The flies tend to grow to around 25 millimeters in length with a wingspan of 35 millimeters.

The back end that looks like a scorpion tale is actually the male fly’s over-sized genitals. The scorpionfly are known for their bizarre mating ritual where the female chooses its mate from the best gift that the males bring her. This is usually an insect or a mass of saliva. Although it looks pretty creepy, the scorpionfly and the ‘stinger’ are totally harmless. 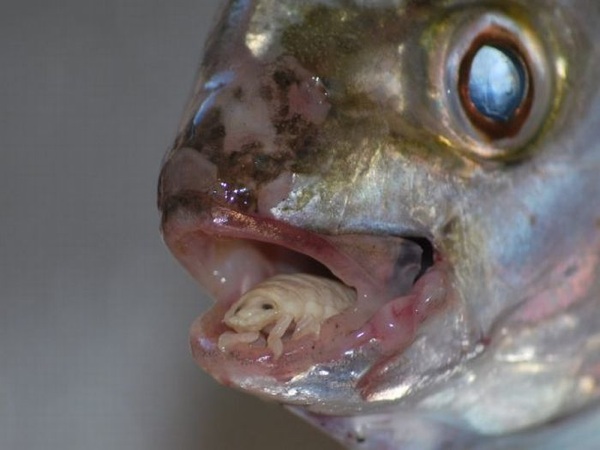 The tongue-eating louse—Cymothoa exigua—is one of the most disgusting parasites known to man. The louse is found in the Gulf of California and enters its host (the spotted rose snapper) through the fins. Several male lice enter the fish at once and then one of these will develop into a female. The female will then travel to the host’s mouth where it attaches to the base of the tongue. The organ’s blood supply is cut off, causing it to die and detach.

Now the parasite acts as the fish’s tongue by binding to the remaining muscle. It feeds off the host’s blood and also algae and mucus that it collects in its mouth. And what about the other lice? Well, they remain in the fish’s gill chamber and may occasionally leave their new home to mate with the female. The host fish is able to live with the parasite for years and apart from the obvious damage to the tongue, it remains relatively unharmed. The tongue-eating louse is the only known parasite that replaces an organ of its host. 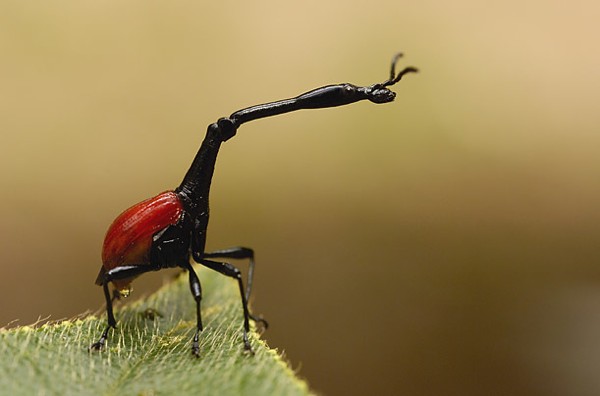 This remarkable looking creature is the giraffe weevil—Trachelophorus giraffa—which is native to the island of Madagascar. It was discovered in 2008 and grows to 25 millimeters in length. It has a black body with a red wing case. The bug gets its name from its extremely long neck that resembles a giraffe’s. Scientists believe that this is an adaptation for fighting and nest building. The neck of the male can be up to three times as long as female weevil’s. What is also interesting about the giraffe weevil is its egg-laying technique. The female will roll up a leaf, then lay one egg within it. It then cuts off the leaf roll from the remaining leaf to prepare the egg for hatching. The leaf provides both protection and a food supply for the young weevils. 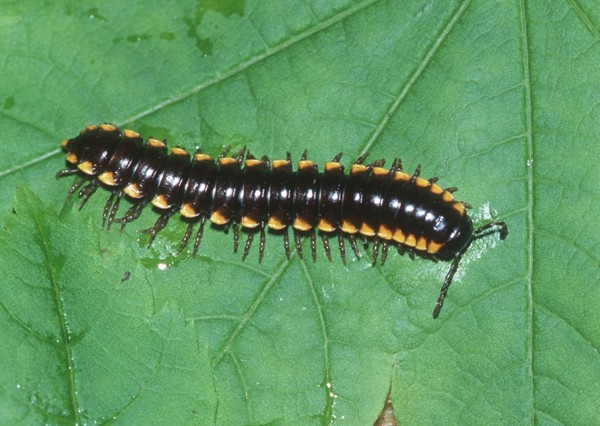 The Cyanide millipede—Harpaphe haydeniana—is the chemist of the arthropod world. This millipede produces hydrogen cyanide (HCN) to hunt prey and to protect itself against any threats. This lethal substance has proved very effective and as a result of this adaptation, the millipede has very few natural predators.

Storing HCN is extremely complex. If it is stored at room temperature, it could harm the millipede. So instead of storing this substance, the cyanide millipede stores two other chemicals, (mandelonitrile and benzoyl cyanide) in various segments of its body. When it needs to release the cyanide, chambers open and the different chemicals mix. The gas is ejected from millions of pores around the body at its prey or in defense against a predator. The millipede produces up to 0.6 milligrams of HCN, which can kill mice, predatory beetles and stun larger predators.

The millipede is found on the west coast of North America from California to British Columbia and grows to five centimeters in length. 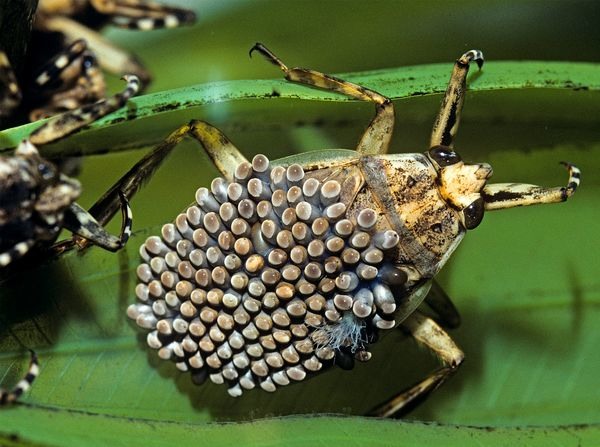 Giant water bugs—Kirkaldyia deyrolli—are mostly found in East Asia, Australia and the Americas. These bugs are some of the largest in the world (measuring up to fifteen centimeters long) and hunt small fish and amphibians. They are also known to consume snakes and turtles. They wait at the bottom of freshwater rivers and lakes for their prey. When a potential meal comes by, the giant water bug injects powerful digestive fluid into it so that the insides of the prey turn to liquid for easier ingestion. The bug has one of the most painful bites in the insect world.

The male bugs take a very active role in reproduction. Around seven hundred eggs are laid on the male’s wings and remain there until they are ready to hatch. These eggs can be seen clearly in the picture above. The giant water bug is used in Asian cuisine and it is a popular snack in Thailand. The pheromones it secretes are used in production of an expensive dipping sauce. 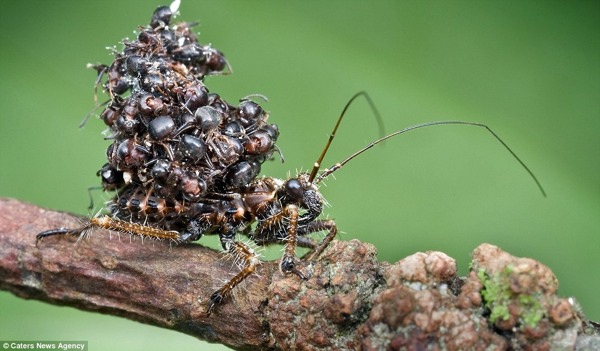 The assassin bug—Reduviidae—has an awesome hunting technique in which it captures and consumes spiders by acting as their prey. It enters the unsuspecting arachnid’s web and starts to pluck the strings to mimic a bug or a fly. The spider then leaves its hiding place to retrieve its food. When it gets close, the assassin bug plunges its long, sharp snout into the creature—releasing a deadly venom which paralyzes it. This venom also starts to digest the spider so the assassin bug can drink the fluid inside—a process called extra-oral digestion (the giant water bug feeds in the same way). The bug’s behavior is known as aggressive mimicry. After feeding, the assassin bug wears the victim’s body as a sort of armor. It also places dead bugs on its back to confuse and scare potential predators. In the photo above, there are over twenty ants atop the creature.

The assassin bug creeps up on many other insects and has even attacked bats. It moves unpredictably to mimic the wind and uses its antennae, which are as long as its body, to detect changes in the environment. You can watch the assassin bug in action here.