Though humans are members of the animal kingdom, only a select few of us feel comfortable studying the creatures around us.  Scientists use animals to research everything from evolutionary history to the curing of disease; yet many of the important animals that scientists study look creepy to the layman.  Here is a collection of animals that scientists love to inspect—which the rest of us just find creepy. 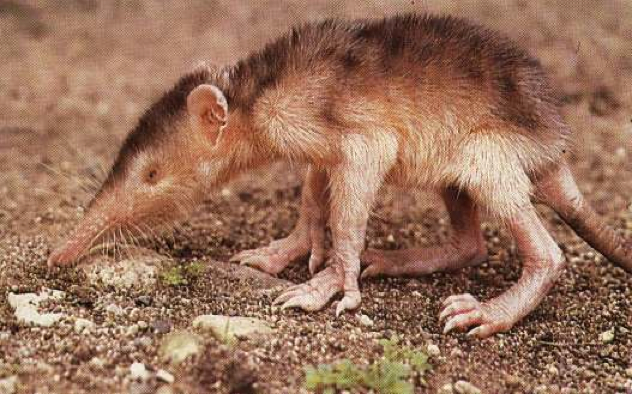 Since its discovery in 1836, only thirty-five specimens of almiqui have been caught.  The family that it belongs to, the solenodons, have been around for seventy-six million years.  That rarity, and the fact that it is considered an endangered species, means that scientists love this strange-looking little guy.

The rest of us, however, are simply terrified of it.  Besides the fact that it looks like a genetic experiment gone wrong (did someone cross an anteater with an opossum?), its saliva is also toxic.  It uses that toxic spit to catch prey. 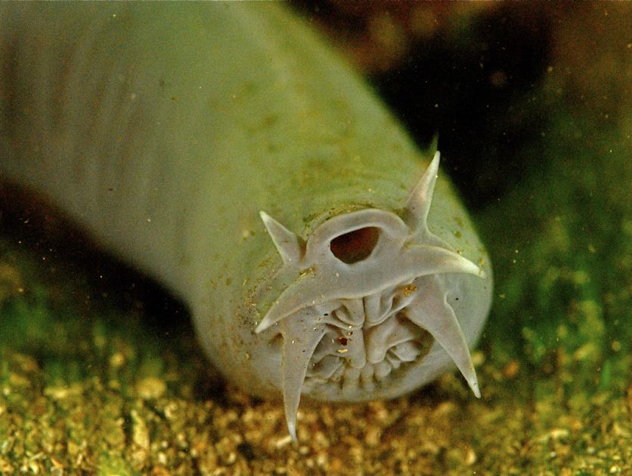 Hagfish are gross, period.  They are covered in slime, and knot themselves up in a horrifying way to confuse predators.  Even sharks have a hard time coping with the grossness of the hagfish.

No one in his or her right mind would want to get near one.  Except scientists.

Scientists love hagfish because they know that we all have them to thank for our existence.  If its ancestors did not survive the mass extinction event of the Cambrian Period, we would not be here.  These ancestors were among the first animals that could be classified as chordate (or having a backbone)—meaning that without them, backbones would likely not have evolved. 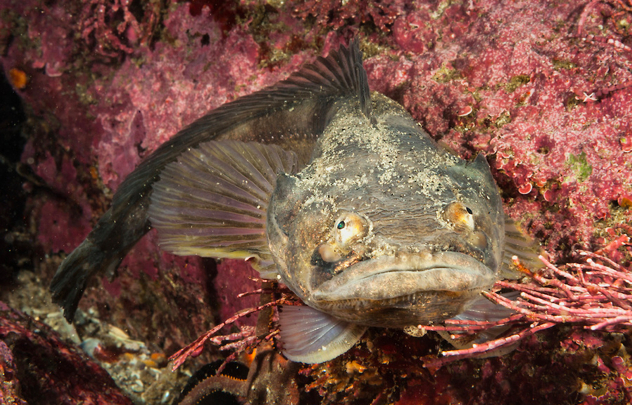 Most fish are ugly, but some fish are uglier than others. Case in point: the Plainfin Midshipman.

Scientist love these fish for a very strange reason.  The Plainfin sing in order to attract females during mating season.  They somehow manage to create this droning love song without vocal chords.  In fact, the sound they make is so loud that human residents who lived near these fishes’ love nest complained that the drone would drown out human conversations and keep them up at night.

Until it was discovered that this supposedly voiceless fish could sing, rumors swirled that the drone sound was made by a submarine or a secret government experiment.  Now scientists are studying the Plainfin Midshipman to see how they make their eerie calls. 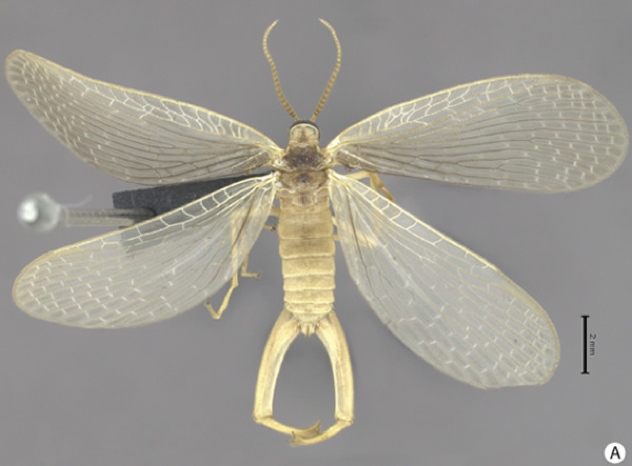 The recently-discovered and aptly-named forcepfly has been the talk of the scientific community for the last month.  This bug’s genitals are shaped like forceps, which look like they could take a chunk out of your flesh.

Scientists are in an uproar over the discovery of a new species of these creepy bugs.  Why? This is only the third species discovered that belongs to this particular family of insects. For those of us who are not big fans of insects, three is three too many. 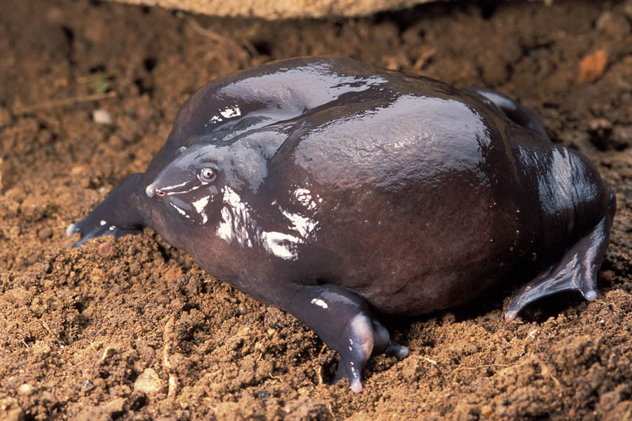 This creepy purple blob is definitely not something that you would want to touch you.  Its main claim to fame isn’t a bad one, however: it used to hop around with dinosaurs.

As it turns out, this guy is a scientific anomaly that caused one scientist to call it a “once in a century” discovery.  The purple frog was found only a decade ago, in the mountains of India.  While the discovery of new species is more common that most people think, this frog is undoubtedly a rarity, as it is not related to any known species.  It is truly one of a kind (and by that, we mean it’s incredibly ugly). 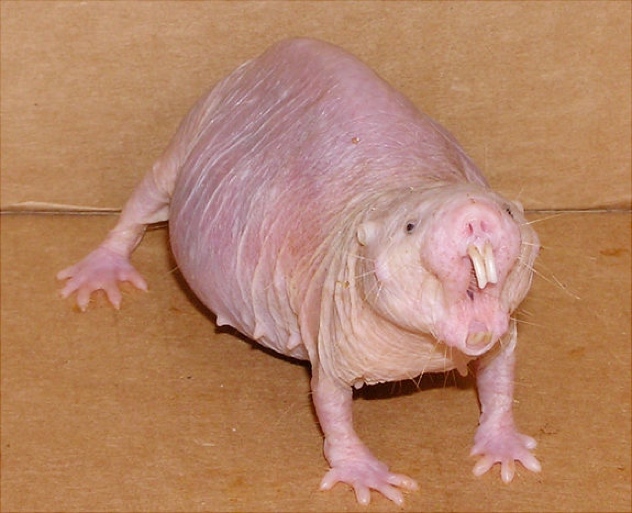 Your initial reaction to seeing the image of a naked mole rat is undoubtedly: “What is that abomination?”

As disturbing as it looks, however, this subterranean East African native is a fascinating animal that science is studying closely.

The naked mole rat ages remarkably slowly.  Compared to the average life span of other rodents, the naked mole rat lives a long time; about thirty years.  Also, its body shows little wear and tear due to aging when compared to humans.  It seems to maintain bone health, reproduction rate and cognitive health throughout its entire life.  Naturally, this means that scientists use them in the study of aging.  The naked mole rat is also seemingly immune to cancer.  Maybe we could swap their secrets for a makeover or two.

There are a few different species of lamprey, but the most well-known (and most terrifying) is a species that would best be described for laymen as a giant leech.  The combination of the words “giant” and “leech” sounds like the title of a B-horror movie—but these things are very real.  The lamprey latch onto anything they can get a hold of, and proceed to suck whatever blood they can find.

In 2006, a 360 million-year-old fossil of a lamprey was discovered.  This means that the lamprey is a living fossil, and is used to study everything from evolution to primitive behaviors in biology.   Regardless of its importance to science, it is hard to swim comfortably knowing that these bloodsuckers are mooching around nearby. 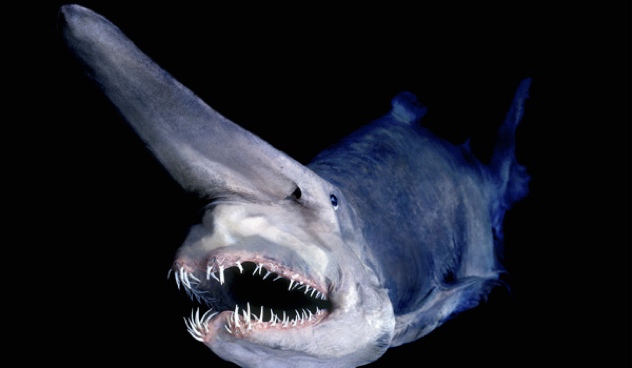 Scientists would love to study a living specimen of the rare Goblin Shark.  One creature was caught in Japan in 2007, and scientists were ridiculously excited.  Unfortunately, itdied a few days later.  The shark stays near the bottom of the ocean and has a similar body structure to that of ancient sharks.   Very little is known about this prehistoric left-over—and that is why scientists love it. 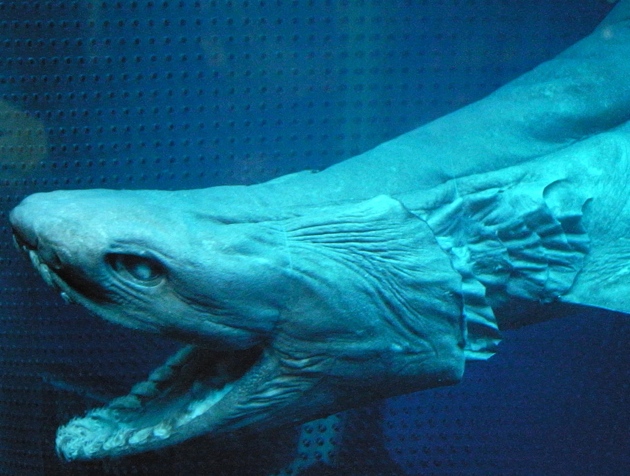 What’s more frightening than a shark combined with an eel?  Approximately one thing, considering that’s how many entries we have left on this list.

The frilled shark is another one of those living fossils we talked about earlier. It has remained relatively similar for over a million years.  It is also a rarity to see.  So rare, in fact, that any photograph of it is big news in the science world.

As well as looking decidedly creepy, this shark has three hundred trident-like teeth in twenty-five rows, and can be as long as five feet.  No biggie. 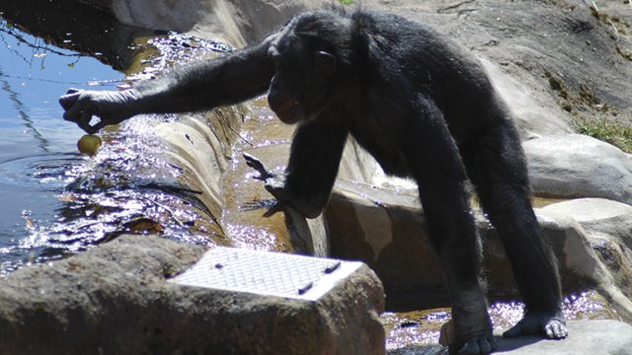 Santino is a chimpanzee at Sweden’s Furuvik Zoo.  Santino is a normal chimp—except that he’s a bit of a jerk.  In 2010, Santino began throwing rocks at zoo patrons—which, to be fair, isn’t too far out of the ordinary.

What is strange, however, is that Santino started getting better at it.  He began hiding rocks around his enclosure, under hay and behind boulders that were within striking distance of patrons.  He would then wait for the zoo to get busy and begin hurling rocks at people.  Scientists love to study Santino’s behavior because he exhibits foresight, an understanding of cause and effect, and the ability to plan; traits that are often thought of as exclusively human.

The rest of us are a little creeped out by this hyper-intelligent chimp.  If he can organize a strategic rock attack against zoo patrons, how long before chimps launch a full scale rebellion against humankind and take over the world?  Seems like a logical progression to me.