Suicide is always a terrible tragedy that hurts everyone it touches, in one way or another. Even so, some people view the end of their life as a grandiose final act, and insist on making a spectacle out of it. As such, certain famous locations have a reputation of attracting a statistically unreasonable amount of suicides. Such locations include… 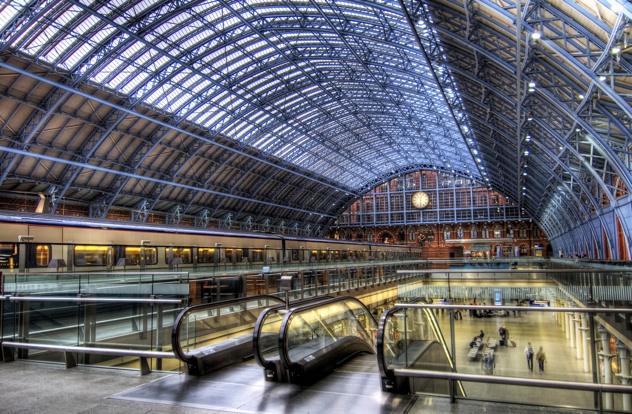 London Underground is perhaps the most famous public transit system in the world. “The Tube”, as it is commonly known, has been operational since the 19th Century. It covers an impressive 270 stations with its 11 lines and 250 miles (402 kilometres) of track.

It is also one of the most likely places in the world to witness a suicide.

As the Underground is readily accessible from almost everywhere in London, its fast, heavy trains have become popular instruments of self-destruction among the more desperate city dwellers. People jump in front of oncoming trains on a weekly basis. The most popular suicide station is King’s Cross St. Pancras, while the Northern Line takes home the “line with most jumpers” prize (145 deaths between 2001 and 2011).

Tube suicide is common enough that these tragedies have become just another routine annoyance for the poor Underground staff. Delays caused by jumpers are called with code names such as “passenger action” or “one under”. The water drain openings many stations’ tracks feature are commonly called suicide pits, because the jumpers who fall in them have a better chance for survival.

As popular as the Underground method is, it is possibly the least dignified way to commit suicide in existence. It is surprisingly ineffective (only 40% of jumpers die), and survivors will be charged with a number of misdemeanors with passive aggressive names such as “obstruction of trains with intent”. Successful jumpers are not treated any better: Their mangled remains will be collected by the disgruntled staff and unceremoniously stuffed in a cleaning cupboard until the authorities arrive. 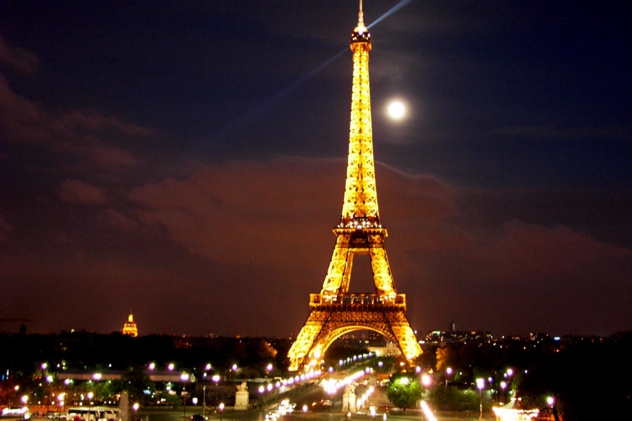 Gustave Eiffel’s 1,063 ft (324 m) masterpiece is one of the most recognizable landmarks in the world and a symbol of both Paris and the entire France. But not all the attention it gets is desirable. The “Iron Lady” has seen its share of jumpers. So many, in fact, that it is said to be the third most popular means of suicide in the entire country (right behind poison and hanging).

Despite its open-frame design, the tower is actually quite difficult to jump from thanks to railings and various safety measures. Yet many are determined to succeed. Some attempt to scale the tower after it’s closed from the public. Others are less considerate, jumping during business hours and landing on the roof of the packed restaurant on the second floor of the tower.

The management of the tower wisely does everything in its power to stop jumpers, from security nets to other, undisclosed safety measures. They also refuse to give statistics on the number of jumpers to the media, instead stating: “It’s always too many.” And really, can there be a better answer? 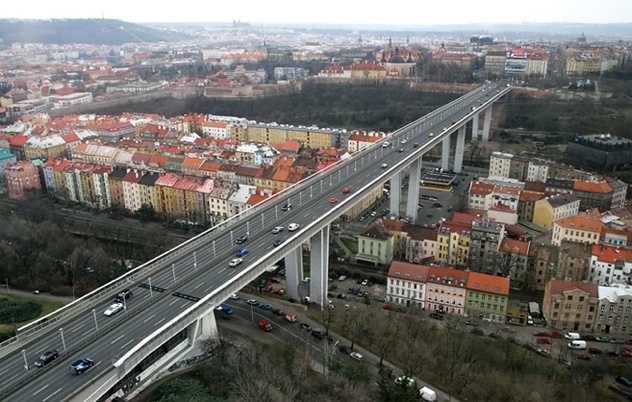 Imagine the quiet, idyllic Nusle neighborhood in Prague, the capital of the Czech Republic. It’s a picturesque collection of small houses and old apartment buildings, located neatly in a small valley. However, this particular paradise has a massive snake: The Nusle Bridge, a massive concrete construction that spans over the entire neighborhood, 140 feet (around 43 meters) over the streets below. Nusle Bridge holds the country’s main motorway, a viaduct and the local subway line.

Still, having the local subway system cast a shadow on them is the least of the Nusle people’s worries. The real trouble is the people falling on them.

The ominous bridge is a notorious suicide spot, to the point that it’s nicknamed “Suicide Bridge” by the locals. Around 300 people have jumped to their deaths since it was built 40 years ago. The city authorities have added a chain link fence and additional safety measures, but these have done little to diminish the bridge’s eerie reputation. 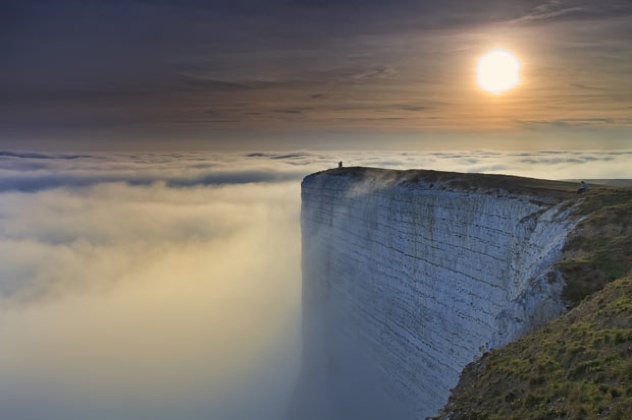 Beachy Head is an instantly recognizable, steep chalk cliff formation in the English county of East Sussex. It is essentially a majestic, 531-foot (162-metre) drop into the sea below. As such, it is one of the foremost suicide spots in the world (around 20 documented cases annually).

The locals are well aware of their landmark’s tendency to attract suicidal people. As such, pretty much everyone in the nearby town of Eastbourne has developed a keen eye for potential jumpers, up to and including taxi drivers and pub staff. A local organization called the Samaritans also patrols Beachy Head daily. 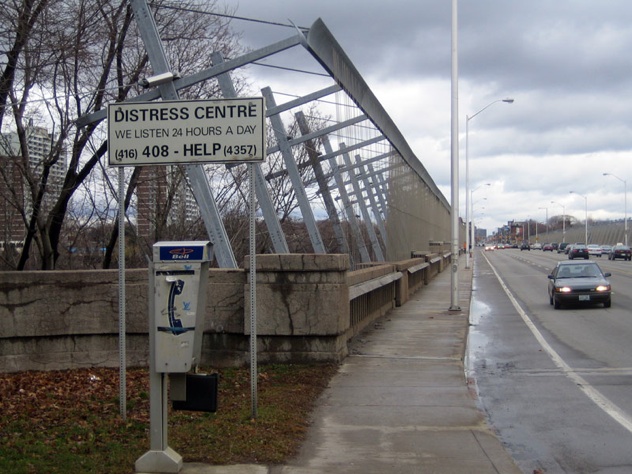 Canadians are notoriously jovial, except for when they’re playing ice hockey. As such, it never occurred to the builders of the Prince Edward Viaduct (a huge 5-lane bridge construct in Toronto) to include safety features in the design. The Viaduct’s railings were designed low, to the point where people could (and occasionally would) climb or trip right over them, plummeting into the ground below.

As social pressures arose and suicides became commonplace, Prince Edward Viaduct suddenly turned into one of the main suicide hotspots in the world. At the height of this questionable phase, the Viaduct’s suicide rate averaged one person every 22 days. To Toronto’s credit, they fixed the issue with extreme prejudice. They built a suicide barrier of steel rods on a frame, incorporating it to the very design of the Viaduct. The barrier is awesomely called ”Luminous Veil”, and has effectively stopped suicide on the structure. 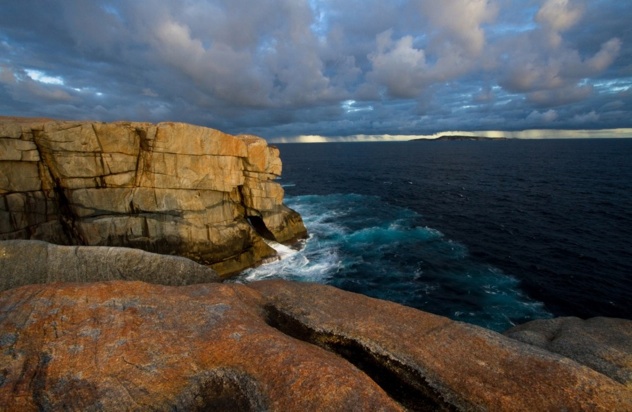 The Gap is the Australian (and therefore automatically more dangerous) version of the Beachy Head we mentioned earlier. Located on the South Head peninsula in eastern Sydney, the steep cliff has seen numerous suicides (including some high-profile ones) over the years.

As with Beachy Head, the residents are well aware of the dark side of their beautiful scenery and are combating jumper activity with means such as fencing and surveillance cameras. Still, the area’s best weapon against suicide was a man called Don Ritchie. Don was a WWII veteran who lived right next to the most popular jumping cliffs. He had a habit of wandering over to jumpers who were bidding goodbye to the world and engaging them in conversation, often starting with the phrase “Can I help you in some way?” Usually, he could and the suicide candidate would end up having tea at Don’s house, their will to live brought back by his sympathetic ear.

Before his death in 2012, Don saved over 160 jumpers this way and was awarded the Medal of the Order of Australia for being a decent human being. People called him ”The Angel of the Gap.” 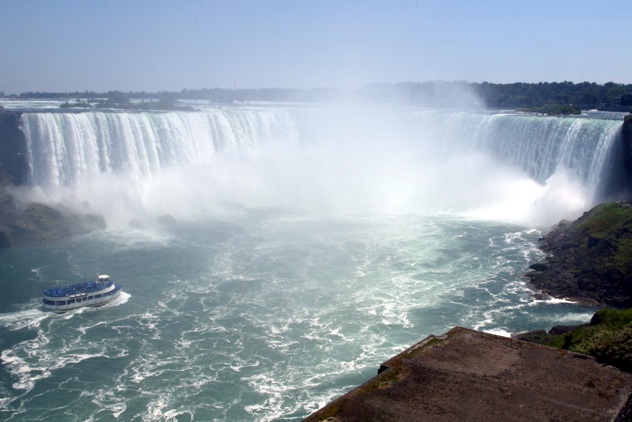 When we think of people falling to their doom on Niagara Falls, we usually think of old movies and wacky characters trying to ride the falls in a barrel. However, the reality leaves little room for laughter. 20-40 people (depending on who you ask) jump to their deaths in the roaring waters of Niagara every year, with an estimated 5,000 bodies found at the foot of the falls between 1850 and 2011.

The area is almost impossible to secure entirely, thanks to the vast amount of potential jumping points. The only people to benefit from the tragedies are said to be the captains and crews of the ”Maid of the Mist” tour boats. They allegedly have a fairly lucrative side business in retrieving the bloated corpses of the jumpers. 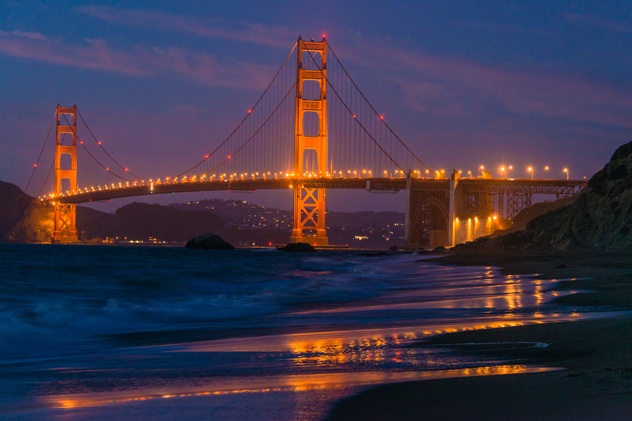 The panoramic Golden Gate Bridge of San Francisco is an icon of the West Coast, rivaled only by the Hollywood sign itself. As a massive construct that grants pedestrians a majestic view and free access on a deck that’s 245 feet (75 m) above the freezing San Francisco Bay, the bridge is a particularly attractive suicide spot.

Golden Gate Bridge has been called the second most common suicide site in the world (we’ll get to number 1 shortly). There is an official suicide count that is at around 1,200 (2005 figure), but the authorities say the actual number may be much higher because not all jumpers have been witnessed. The ones that have are meticulously (and somewhat creepily) catalogued and sorted according to which of the bridge’s 128 lamp posts the jumper was nearest.

Luckily, the bridge is fairly well protected. It has its own highway patrol force that is able to talk roughly 80-90% of jumpers out of actually taking the fall. A safety net that should prevent the rest of the suicides is under development, but lack of funding (it can cost up to $50 million) has so far delayed the project. 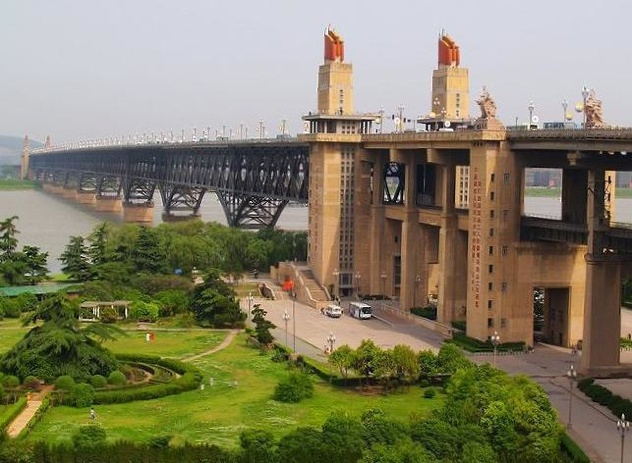 China is known for its massive constructs, and the fact that life can get difficult there if you’re one of the unlucky downtrodden masses. The massive four-mile Nanjing Yangtze River Bridge in Nanjing, China is testament to both facts. This hulking bridge complex is an engineering masterpiece by any account. However, it also has an fearful reputation as one of the most prominent suicide sites of the Asian supernation. In fact, the Nanking Yangtze is listed as the most common suicide site in the entire world, with over 2,000 suicides on its dreary record.

Still, that terrifying number might be much larger if it wasn’t for the bridge’s very own watcher. Mr. Chen, a stout man recognizable by his baseball cap and an ever-present pair of binoculars, is the bridge’s operator. He spends all his spare time scanning the bridge from a vantage point at its South Tower, not unlike Don Ritchie at the Gap. Whenever he spots a jumper, he attempts to help them both by himself and by calling backup. Sometimes he succeeds. Sometimes he fails and has to witness a horrifying death. But every single day he’s there, vigilantly watching over his bridge. By 2010, Mr.Chen had personally saved the lives of no less than 174 people. 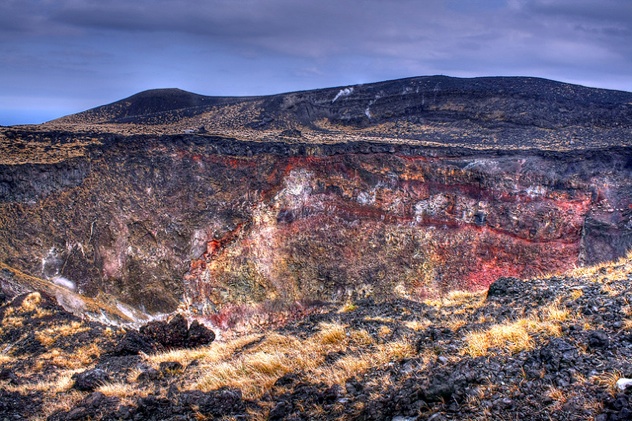 Mount Mihara is a famous landmark on the Japanese isle of Izu ?shima and a staple of Japanese popular culture. It’s the place where the government imprisoned Godzilla in “The Return of Godzilla”, and played a prominent role in the original version of the movie “Ring”.

It is also a suicide hotspot that rivals even Aokigahara forest, the old Listverse favorite.

Mount Mihara happens to be an active volcano, and it’s open enough that its lava flow can be accessed from the top by jumping. This fact was abused in 1933 by Kiyoko Matsumoto, a 21-year-old student. Kiyoko leaped in the depths of the mountain and immediately evaporated in the lava pit’s hellish temperatures of up to 2,200 °F (1,200 °C). This started a fashion trend among the Japanese. For almost a decade, jumping into the boiling lava rivers of Mount Mihara became the hottest way to commit suicide… literally. Thousands of people imitated Kiyoko’s example. 944 people jumped in the crater in 1933 alone.

The authorities have since fenced off the vantage point where the jumpers leaped to their fate. This is said to have stopped the suicides, although there’s no way to be sure. It’s not as if there’s going to be a bodies to be found.