China is in many ways a study in contradictions. For centuries, it ranked amongst the most civilized places on the planet, responsible for many innovations that would not be “discovered” in the west until hundreds of years later. In the 19th century, the country saw a calamitous backslide; foreign invasion civil unrest, and war weakened their infrastructure. In the wake of World War II, still reeling from Japanese occupancy, the Communist Party under Mao Zedong was able to wrest control of the country. During Mao’s reign, tens of millions lost their lives, particularly in the Great Chinese Famine of 1958-1961. Estimates vary wildly, with some claiming 15 million dead and others well over 45 million.

In recent years, things have improved; China has become the world’s largest manufacturer and an important player in the global economy, but shades of the past remain, such as the infamous “one child policy”. Below are ten of the stranger aspects of living in the world’s most populous country. 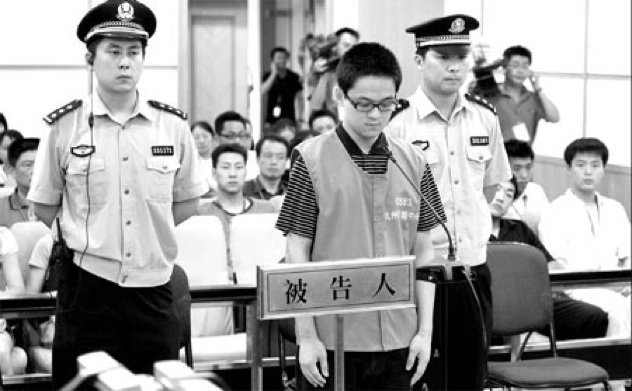 In western nations, the rich lead lives of often unchecked privilege, but even the wealthiest are not fully exempt from the law. Billionaire cheapstake “Queen of Mean” Leona Helmsley famously served nearly 2 years in prison in the early 90s, and even homemaking magnate Martha Stewart spent time behind bars. But in China, if you have the dough, and a little bit of clout, you can send someone else to prison in your place.

Although authorities have vigorously denied that this has gone on, often the “body doubles” don’t even closely resemble the accused, and facial recognition software has proven it. The practice of hiring someone else to stand trial and serve your prison sentence is so popular among China’s elite that there is a term for it: “ding zui” which means “substitute criminal”. In a case that echoes “whipping boys” of medieval Europe, 20 year old rich kid Hu Bin killed a man while drag racing in 2009, and was sentenced to 3 years. The man who served the trial looked dramatically different than Hu, but served the sentence and finally walked free in September of 2012. Likely to a pretty sweet payday.

China’s unchecked industry and rising number of automobiles has resulted in heretofore unheralded amounts of air pollution. In the capital city of Beijing, the smog is so thick buildings are obscured and people are encouraged to stay inside or risk damage to their lungs. While the Great Wall of China cannot be seen from space, the smog can; it is so thick, airlines are often forced to cancel flights. “Cancer villages”, neighborhoods where vast numbers of people are dying from breathing in carcinogenic fumes, have begun popping up in urban areas and near factories.

Air pollution is measured in parts per million (ppm), or how many particulates are in the air that are over 2.5 micrometers wide, and the World Health Organization gauges the threshold at about 20ppm. After that, one’s health might be compromised. The global average is 71. Beijing routinely tops 500, and has hit 775. The Chinese government has taken some steps to clean up the environment, but for people who are forced to wear surgical masks just to walk to the store, improvements seem slow in coming. 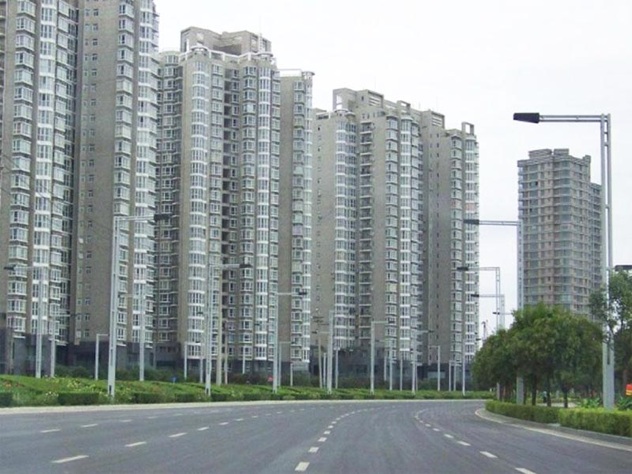 By far the world’s most populous nation, China’s numbers continue to grow. Banking on the vast population requiring housing, the government has tapped developers to build entire urban infrastructures to accommodate the hordes. Unfortunately, property prices have far outstripped inflation, and many of these vast cities (complete with skyscrapers, shopping malls, and outlying suburbs), have gone all but completely unoccupied. The real estate bubble has burst in much of China, and hundreds of billions of dollars in investments sit empty. Footage of such areas has a decidedly eerie, post-apocalyptic feel. Nowhere is this more obvious than in the New South China Mall, the world’s largest mall by gross leasable area, which has sat 99% empty since opening in 2005. 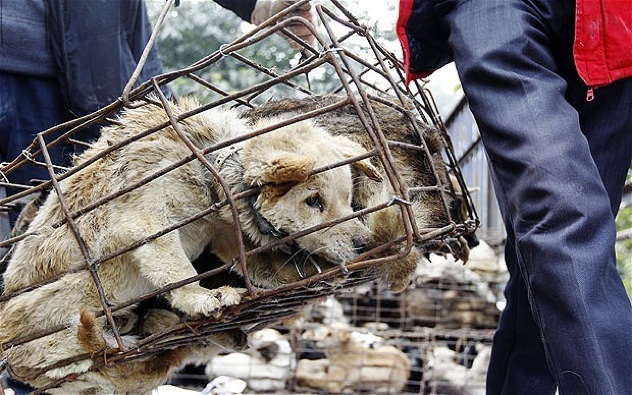 No one on earth has had such a complicated relationship with the dog as the Chinese. While some of the most ancient and popular breeds in the world hail from China (including the chow, pug, pekingnese, and shih tzu), they have also long been viewed as a food item. However, he popularity of dog meat (gou rou) has recently begun to decline. There have been cases of dogs headed to market being rescued by activists. As China enjoys an emerging middle class, pet dogs have become a status symbol, like an automobile. In 2011, a Chinese oil baron purchased a striking red Tibetan Mastiff named Hong Dong (Big Splash) for ten million yuan (approximately $1.5 million USD). 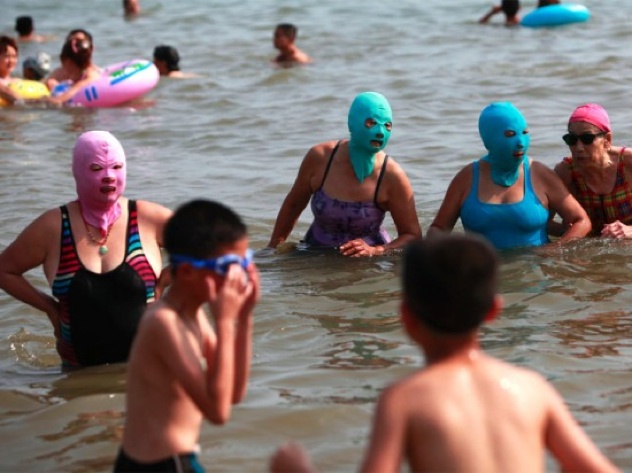 In most of the world, tanned skin is seen as a sign of beauty, with my many willing to endure extreme measures (and of course risk cancer) for a bronzed complexion. But in China, a traditionally agrarian country, it is pallid skin that is seen as a sign of beauty. Where common workers would be scorched by the sun, only the rich and privileged remained pale indoors. The Chinese make every attempt to maintain fair skin; on sunny days they are often seen holding umbrellas. But a recent trend in beachwear beggars belief in much of the western world.

Chinese women have been seen hitting the shores in “Facekinis”, protective masks that cover their entire heads with the exception of their eyes, nostrils, and mouths. The style is reminiscent of the masks worn by traditional Mexican ‘lunchadore’ wrestlers, and comes in a vast array of colors and patterns. Apparently, they are quite popular. In describing the success of the Facekini, one online retailer cryptically reported “We are already out of the pink ones…. All of them sell well. Orange is the most effective in protecting people from sea creatures.” 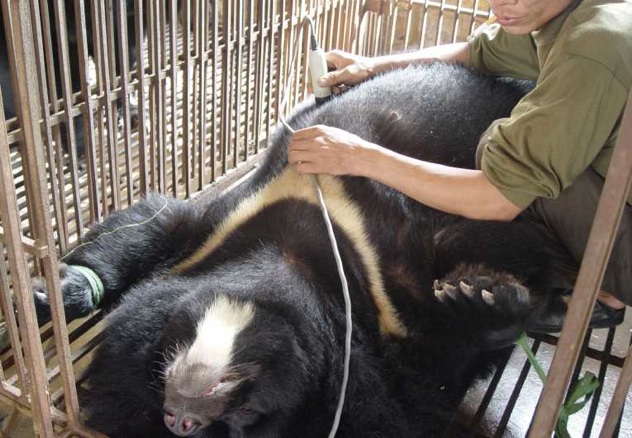 Centuries before the discovery of penicillin, the Chinese advanced their own strange cures. Traditional Chinese Medicine (TCM) advances the theory that health is determined by the flow of qi or “life energy” through the body in paths called meridians. Although practices such as acupuncture and fire cupping have become all the rage, their effectiveness is up for debate. Far more controversial is the use of animals in their medications, consumed to absorb the strength or essence of the creature. In an era when pharmaceutical companies seem to have an answer to most ailments, TCM has become more popular than ever, threatening to push multiple species into extinction.

One the most popular remedies is derived from the the so-called “bile bear”, whose plight is something out of a torture porn horror movie. The animals, some of whom are captured in the wild and others who are born in captivity, are relegated to tiny metal “crush cages” with barely any room to turn around. Their claws are hacked off and their teeth are sawed down to the gumline, rendering them unable to defend themselves. Then a hole is opened in the bear’s abdomen, where a catheter is inserted to extract bile (a substance which helps the body to digest fats). The animal is forced to wear an iron vest to keep it from removing the line. Bear bile has been described as a cure-all capable of curing ailments as diverse as headaches, liver trouble, and vision problems.

Another prevalent medication is rhino horn, particularly helpful for treating fevers and convulsions. The horn of a rhinoceros is composed of keratin, the same substance which makes up human finger and toenails, and studies have shown it to have no medical benefit whatsoever. Due to their rarity (most rhino species are critically endangered), horns are worth more per pound than gold or cocaine. A single horn can fetch a quarter of a million US dollars. 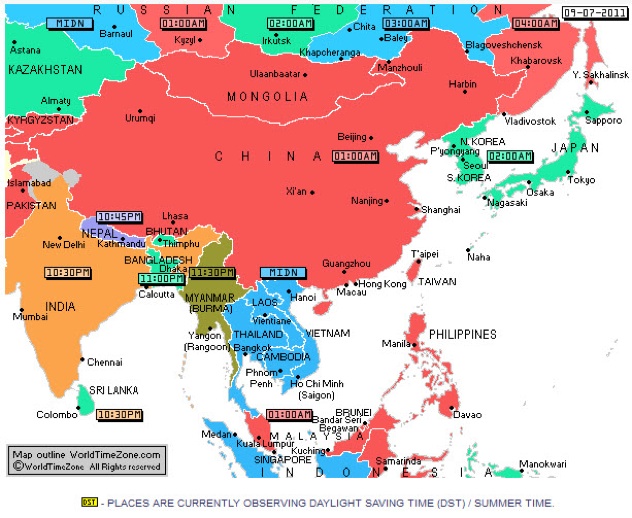 China is a vast country, third largest in area behind only Russia and Canada. At its widest point, it is some 3,123 miles across. Prior to 1949, this area encompassed five time zones, but when the Communist Party took over, the entire nation was relegated to a single time, 8 hours ahead of Greenwich Mean Time. This was a political move, a control mechanism meant to instill unity amongst the Chinese people, but it has certain drawbacks. For instance, in the far western areas of the country, the sun often doesn’t rise until after 10am. For this reason, some people use their own “unofficial time” to keep up with daylight. Hong Kong and the gambling mecca of Macau also maintain their own time zones. 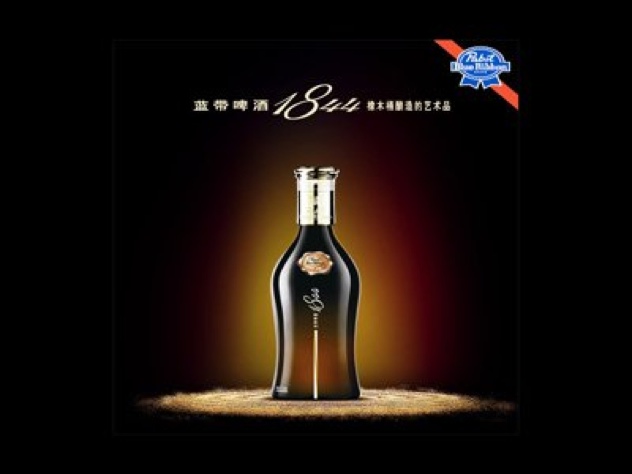 Alcohol has had a part in Chinese society since ancient times, but the trade was in some ways suppressed in the early days of the Communist takeover. In the years since, it has become increasingly popular. There has been a recent trend toward selling the Chinese liquor baiju in the United States and other western nations. According to one American insider at the U.S. Meat Export Federation in Beijing, baiju “…tasted like paint-thinner and felt like a liquid lobotomy,”

Like all countries, China has a taste for the exotic, and one of their favorites is America’s subpar brew Pabst Blue Ribbon. The beer, which costs about a buck a can in the US, goes for 300 yuan in China (around $46 USD). 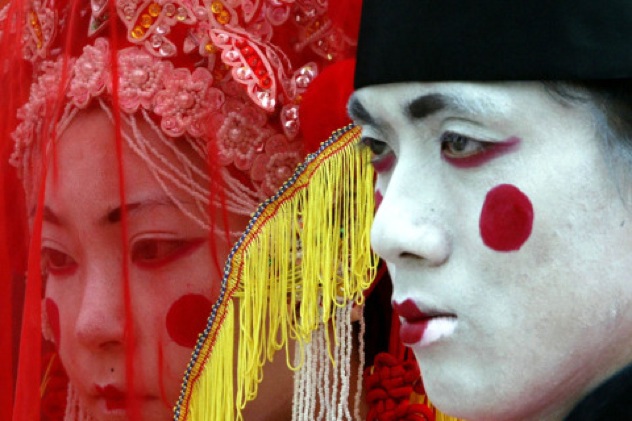 Many cultures believe in providing small sacrifices or offerings to the dead to ease their passage into the afterlife. The Greeks began the ritual of placing coins on the eyelids for the deceased to pay Charon the boatman, who would ferry them across the River Styx and into the underworld. Egyptian mummies have been found surrounded by riches and pets dispatched to keep them company. But few cultures in the world feel the need to provide a family member that died single a spouse to keep them company.

There are several variations of the ghost marriage, but the crux of the situation is that at least one of the spouses is dead (perhaps not surprisingly, this practice is meant to benefit the male). Sometimes a living female is married to a dead man, wherein she is forced to move in with his family and live a life of celibacy in preparation to join him in the afterlife. Other times, the bodies of men and women that did not even known each other are buried together. Perhaps not surprisingly, this has led to a morbid trade in grave robbing—the going rate for female corpses is around $50,000 yuan ($8,153 USD). 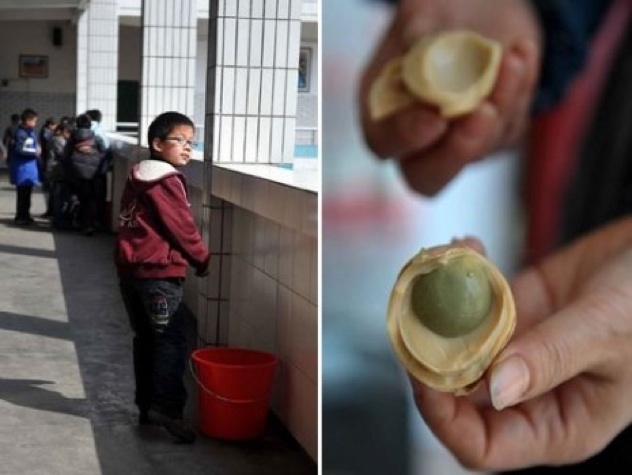 Asian nations have long been known for their exotic, sometimes unorthodox eating habits, dining on such fare as sannakji (live octopus), silkworms, and snake blood wine. But in the Zhejiang province of China, a traditional dish shocks even some of the most jaded palates. Long hawked by street vendors like hot dogs, “boy eggs” sell for about 25 cents apiece. At first glance, they resemble any other hard boiled egg, only instead of water, these are boiled in the urine of young boys (taken from elementary schools). The preferable stuff comes from lads under the age of 10.

Locals swear by the eggs, which are first soaked in urine, then boiled in it. After boiling, the shells are cracked, and they are allowed to simmer for hours in the brine. Their taste is described as fresh and salty, and they are rumored to have myriad health benefits, including protecting the body from heat stroke, relieving joint pain, and increasing circulation of the blood.

Mike Devlin is an aspiring novelist. He loves pandas.