Nature is filled with animals that present hazards, feed on other species, or serve as dominant players in the ecosystem, but in this slightly distressing account, we examine the worst examples of nature gone rogue. An element of order exists in nature, despite the violence and chaos, but poorly planned human introduction of animals can throw that order to the winds. Unhindered by predators or natural limits, mass invasions often result in the destruction of species, ecosystems, and even human settlements ill-equipped to handle the threat. 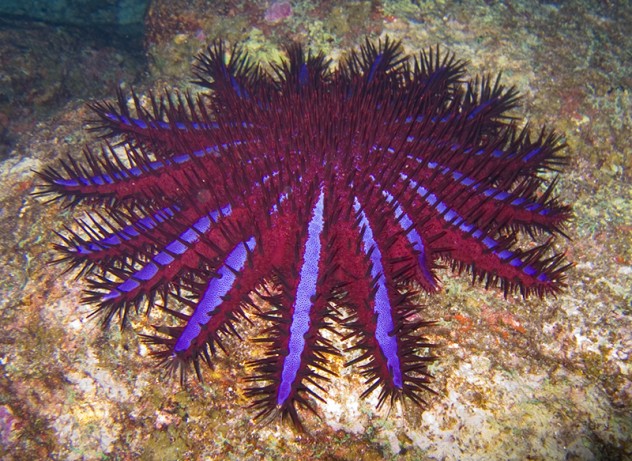 Resembling an alien invader, the crown-of-thorns starfish presents as the echinoderm of nightmares. Growing over 33 centimeters (13 in) in diameter and possessing up to 21 arms, the animal is covered in razor-sharp spines that protect it from most predators as it feeds on coral polyps. Unlike introduced invaders, the starfish has become a problem in its native range due to environmental changes. With a voracious appetite and rapid rate of reproduction, each starfish in a “herd” may consume up to six square meters (64 square feet) of coral reefs per year, destroying massive reef sections. Scientists believe the outbreaks stem from human-induced changes in the ocean ecosystem, primarily increases in nutrient pollution. As a result, population control programs to inject the starfish with lethal toxins have been implemented in some areas. 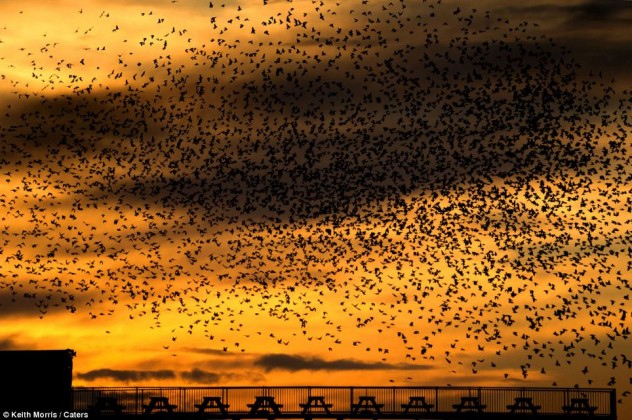 The European starling was established on the North American continent by American nostalgic and Shakespeare devotee Eugene Schieffelin, a man with a self-styled mission to introduce every bird mentioned in the works of Shakespeare to North America. Schieffelin’s 60 birds were released in Central Park and proceeded to take over the continent, from Alaska to Central America. The birds invaded cities and neighborhoods, destroyed crops, and were responsible for massive declines and local extinctions of many treasured native songbirds including woodpeckers, bluebirds, and swallows. Swarms of starlings threaten aircraft, and 62 people died when an American airliner sucked birds into its engine. Despite massive control programs, the European starling population currently sits at around 150 million birds in North America. 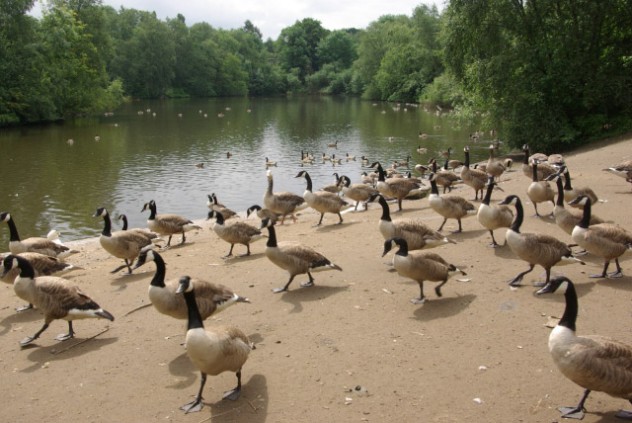 Although Canada has no official national bird, the vast majority of wildlife admirers would name the Canada goose as the country’s most representative avian species. However, Canada is large enough to support a several different subspecies of Canada goose, with somewhat different ways of life. In an avian equivalent to a civil, rather than foreign invasion, resident Canada geese subspecies from Canada’s interior regions are damaging estuaries along the Georgia Basin, a globally significant stopover for thousands of migratory birds and a core salmon habitat that in turn supports humans and endangered orca populations.

Former federal wildlife scientist Neil K. Dawe has conducted field studies on a series of estuaries and published findings that suggested the geese are destroying the habitat and causing the food chain to crumble. 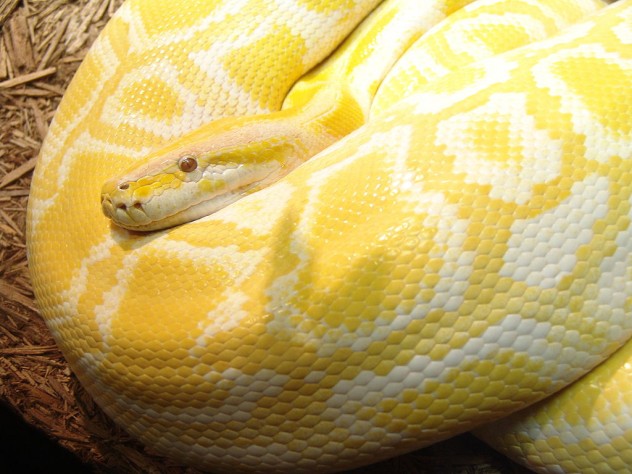 Many invasive species are rather small, but the Burmese python is an enormous and potentially deadly giant. First introduced to the Florida Everglades, a world-famous wetland region, these monster constrictors are among the largest snakes on the planet, growing to lengths over five meters (16 ft), and weighing up to 90 kilograms (200 lbs). The snakes are believed to number in the thousands in this habitat far from their original range in southern Asia. The jaws contain powerful, razor-sharp teeth. The giant pythons threaten to devastate the wetlands as they devour native species with their massive strength, even preying on the usually invulnerable American alligators. The snakes have been flagged as a priority for removal by state wildlife management authorities, but control efforts have been rather ineffective to date. 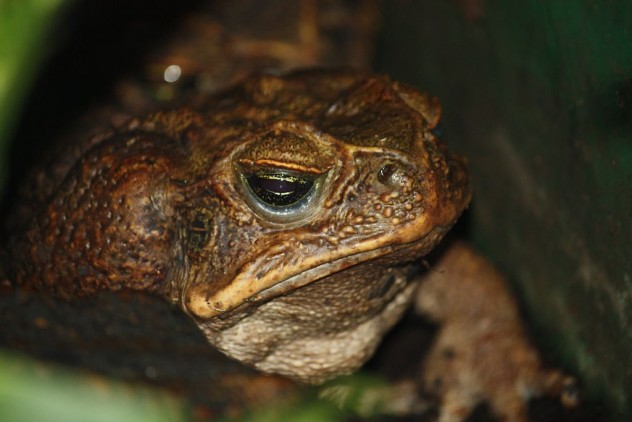 The cane toad is living proof that introducing a second species to control an existing invader may lead to an even worse disaster. Originally native to Central and South America, the huge, toxic amphibian (which can weigh nearly 2 kilograms (4.5 lbs) and grow up to 23 centimeters (9 in) in length) was released in the early 20th century to control sugar cane beetles on various tropical island plantations. Instead, the toads spread through a wide range of habitats, pushing native fauna into decline, including predatory lizards, marsupial mammals and songbirds, and even the fierce, man-eating saltwater crocodile may have its nests threatened by cane toads.

Like many invasive species, cane toad populations remain artificially high in their new environment due to the absence of predators adapted to feeding on them and tolerating their defensive toxins. Proposals to control cane toads with a virus were met with concern that this would perpetuate the chain reaction by harming native species. In a strange twist, the toad’s natural toxin is being used to lure tadpoles for extermination. 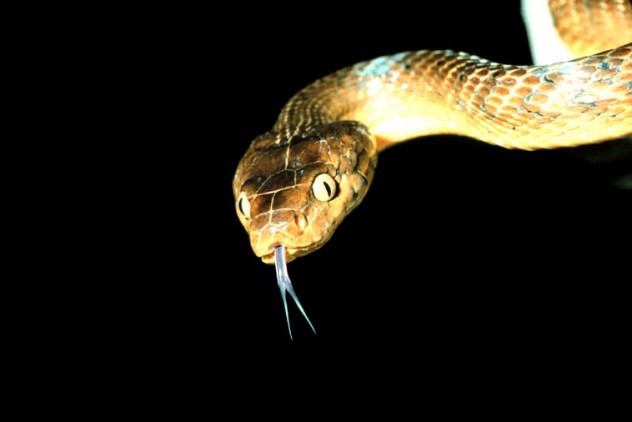 When a predator is introduced to an island, native species are ill-equipped to handle a threat they never evolved to resist, while an absence of suitable predators sparks a population explosion (an effect amplified in the restricted space). When the brown tree snake arrived on the island of Guam after World War II, likely as a stowaway in a ship’s cargo hold, the reptile triggered what may have been the single largest ecological catastrophe attributable to one introduced species. The mildly venomous snakes proceeded to wipe out most of the native forest-dwelling vertebrate animals and were responsible for painful bites and power outages when they invaded human settlements. Airdropping of dead mice laced with drugs has been used to control the reptiles, which have grown up to three meters (10 ft) long due to the unnaturally large food supply. 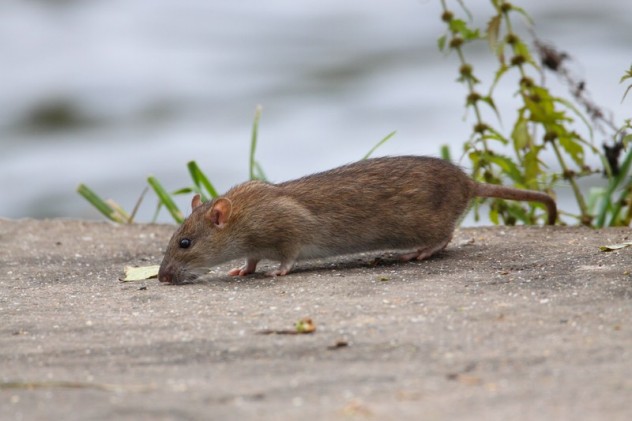 Ships do not only carry humans, but they often carry some of man’s greatest enemies: the Norway rat and the house mouse. The invasive, sometimes disease-carrying rodents also deliver a death sentence for entire populations of seabirds when they disembark at island ports, where they subsequently devour eggs, young, and even adult petrels, auklets, and other waterbirds that rely on nesting grounds free of terrestrial predators. Worldwide, the presence of invasive rats is contributing to a global seabird extinction crisis that has seen predation rates rise to extremes of up to 25,000 chicks per year in the case of the endangered Henderson petrel. Equally dangerous are the invasive house mice, threatening species such as the critically endangered Tristan albatross, and even eating chicks alive. 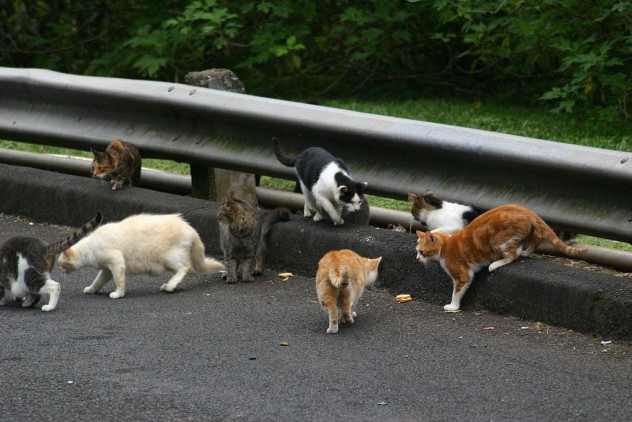 Cats may be man’s second-best friend, but they have also proven themselves a scourge of invasive potential as they stalk through foreign environments and decimate the native fauna. With man’s direct and indirect assistance, feral cats have caused the deaths of millions of continental songbirds ill-equipped to handle the stealthy attacks of the burgeoning predators. Impacts to island birds are especially catastrophic. In an unprecedented occurrence, one individual cat is believed to have caused the extinction of an entire species of New Zealand bird, the Stephens Island Wren. Numerous islands and continents have experienced serious declines in populations of nesting seabirds and native mammals following cat infestations. However, there is a flip side. Some scientists believe that cats may actually save some individuals by exerting top-down control on smaller predators such as rats.

Humans are often flagged by concerned conservationists as a primary invasive species on the planet, but we seldom imagine a monkey as an invasive species. However, the crab-eating macaque actually made the International Union for Conservation of Nature’s 100 Worst Invasive Species list. Crab-eating macaques are prolific primates that have proven capable of invading a range of island environments following human introduction.

Like many land-based invaders, the intelligent primates threaten globally significant tropical bird breeding sites and are believed by some to be responsible for pushing endangered bird species toward extinction. Macaques may behave aggressively towards humans. The monkeys carry a potentially fatal endemic strain of herpes virus that also infects humans. Symptoms resemble herpes simplex, but brain damage and death may follow without proper treatment. 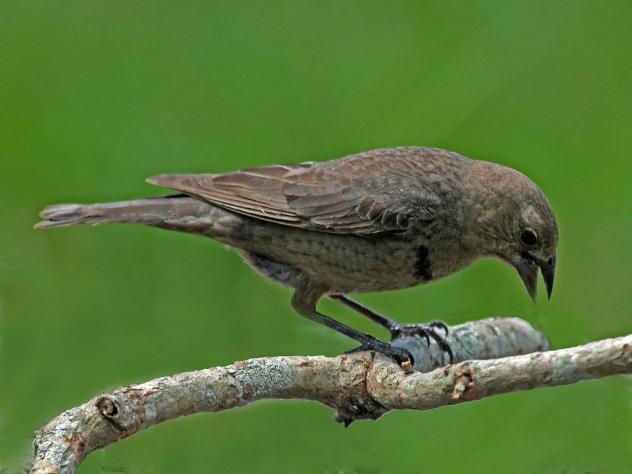 Terrestrial animal invasions may also result where human-induced changes in land use provide a species with increased opportunities to prey on its victims or, in the case of the brown-headed cowbird, to parasitize its nests. Brown-headed cowbirds originally evolved on the plains of North America, where they followed the buffalo to pick up disturbed insects. Buffalo chasing prevented the birds from building a nest and raising young. A strategy evolved where the eggs would be placed in another bird’s nest for them to incubate as the cowbirds moved on. In the evolutionary arms race, many species developed methods of removing or failing to incubate the planted eggs.

However, growing fragmentation of forests into small patches allowed cowbirds to spread across thousands of square miles of woodland territory, where they contributed to the decline of numerous forest-dwelling songbirds who were not prepared to remove the eggs, resulting in the starvation of their own (true) young. In order to compensate for cowbird invasions, conservationists sometimes shoot this “native invasive” in songbird protection programs. Cowbirds even succeeded in driving the rare Kirtland’s warbler to the highest levels of endangerment.

Alexandre Thompson is an extreme wildlife researcher and writer with a passion for the mysterious and bizarre elements of the animal world.

Email Alexandre for nature writing services and tours in Canada.