Deep down, everyone loves a rebel. They do what we only wish we had the courage to do. There are movies made and songs composed to immortalize the human rebels among us.

But what about our animal friends?

Sure, they usually stick to relatively predictable patterns of behavior within their species. But not always. Although this isn’t the stuff of movies (except maybe a National Geographic special), here are 10 times that animals threw out the rule book and did something really unexpected. 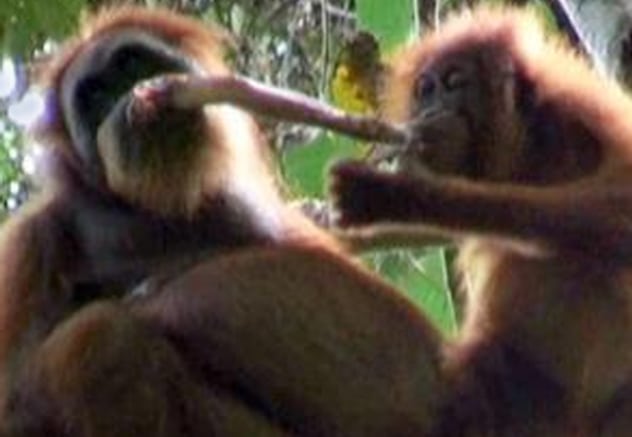 Orangutans are ostensibly vegan, thriving on a diet of mostly plants, fruit, and leaves. They do end up eating quite a lot of bugs as well, of course.

But nobody thought they were capable of hunting and killing until they were observed tracking down slow lorises and dispatching them before eating. The orangutans seem to have chosen the cutest of all creatures to eat.

Orangutans only seem to do this when there is not much other food available. In fact, they have only been noticed hunting in this way nine times in the wild and that was among the same five orangutans.[1]

9 Swans That Had A Breakup 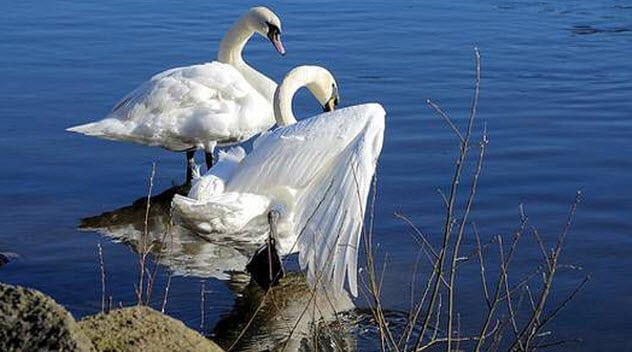 Bewick’s swans are well-known for their predictable anniversaries as they nearly always pair for life. The Slimbridge wildfowl sanctuary in Gloucestershire, UK, has been observing the migration of their Bewick’s swans for 40 years, and they have only seen a “swan divorce” twice.

The male swan, Sarindi, was seen to break off from his partner, Saruni, during the migration from Arctic Russia to Britain. When Saruni arrived with a new partner and showed no signs of even recognizing Sarindi, it became clear that the relationship had not ended well with the swans.

Normally, Bewick’s swans stay together until one or both of them dies. So it was definitely breaking the mold to split up.[2] 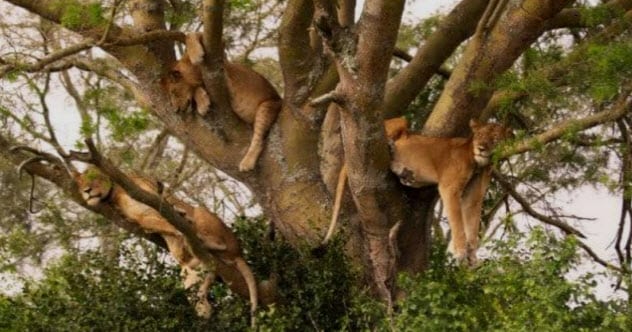 It’s not normal for lions to climb trees. At least, not for most lions. They are very large cats, and they don’t have the same natural climbing ability as leopards, for example. However, the lions that live in Queen Elizabeth National Park in Ishasha, Western Uganda, and in the Lake Manyara Game Reserve in Tanzania have mastered tree climbing.[3]

There are many good reasons why lions would go to the trouble of learning to climb trees, even though it is obviously quite difficult for them given that they didn’t really evolve to do that. It might help them to stay cool, avoid flies, and have a better view of their territory. Or perhaps they just got jealous of leopards. Who knows? 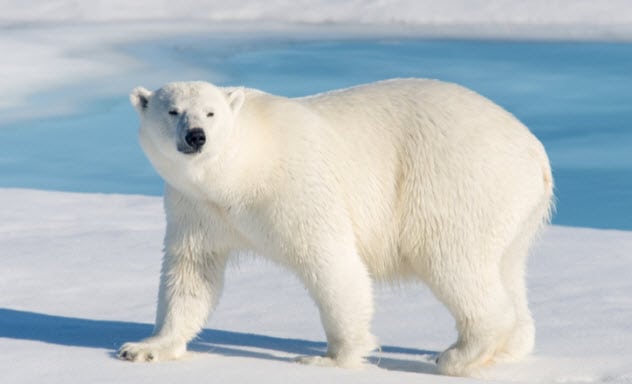 For a formidable creature like the polar bear, it might actually be surprising that cannibalism is rare. After all, polar bears are hunters and scavengers and they don’t seem to have many boundaries about what they will and won’t eat.

Yet, in studies of polar bear populations, only one or two incidents of these animals killing and eating other polar bears are recorded in any given year. The bears that engage in this behavior are nearly always in bad condition and starving, which probably leads them to desperate measures.

It has been speculated that the effects of climate change are causing more frequent episodes of polar bear cannibalism because they are often running out of food a lot faster than normal. This could lead them to take the kill-or-be-killed approach sooner rather than later. Even so, the number of times that polar bears do this per year is only 5–6 in one area.[4]

6 Snakes Fighting Over Nothing

It is very common for snakes to fight, and they often engage in creepy-looking “combat dances.” But this usually involves two snakes of the same species because they are in direct competition for the same resources.

Then we received evidence that snakes might like to spar over nothing. Using her smartphone, Arkansas resident Dawn Kelly recorded a cottonmouth and a copperhead snake fighting each other.

What were they fighting over, given that they were different species with very different requirements for food and mates? Nobody is quite sure, but scientist Phil Senter theorized that they could have been arguing over a hybrid female snake.

Reptile breeders often crossbreed the two species, creating “coppermouths” or “cottonheads.” One of these may have escaped into the wild. The two male snakes might have been confused over which of their species the female was and which of them had the right to pair with her. But one way or another, this behavior has never been seen before.[5]

5 Elephants Eating Their Own Poop 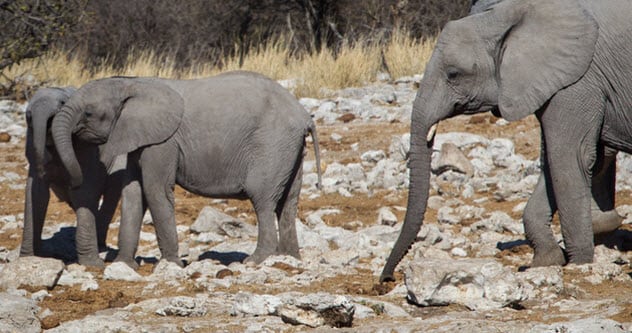 Eating your own poop is known as “autocoprophagy.” (“Coprophagy” refers to eating feces in general, not just your own.)

Autocoprophagy is not a very good idea unless you’re a lemur, rabbit, rat, mouse, dog, pig, or one of many animals that does this more often than we’d probably like to think about. These animals suffer no ill effects from eating their own poop. Until recently, nobody really linked this behavior to elephants, but that seems to be changing.

Elephant researcher Keith Legget isn’t sure whether autocoprophagy is actually rare in elephants. Maybe people just don’t notice or don’t like the behavior and therefore don’t report it in their sightings.

The reason that elephants do this is probably to recycle nutrition that may be left in their dung, given that they only digest about 20 percent of their food. It may also be to repopulate their guts with the right bacteria. It might be that elephants resort to eating their dung when food is less available, which doesn’t happen very often.[6] 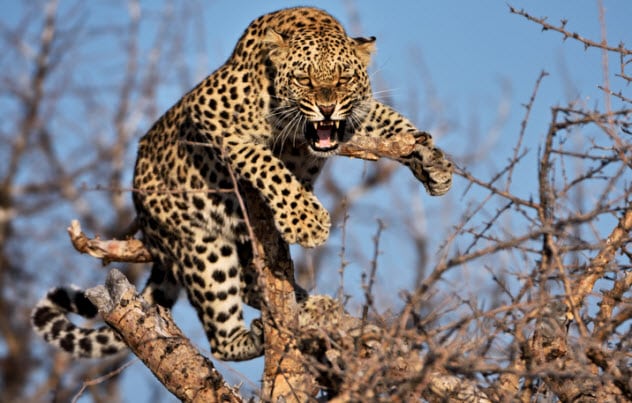 Kim Wolhuter has been studying and filming leopards for many years. He followed a male leopard, Tjololo, for 18 months and noted behavior that seemed unique to this leopard. Tojololo would make two kills, rather than one, to distract the hyenas that would inevitably follow him. That way, he could eat in peace.[7]

This meant that he had to go to the effort of taking down one prey animal, leaving it, and attempting to take down another immediately afterward. He could then have the second kill to himself while the hyenas were busy eating his first kill. That’s one smart leopard. 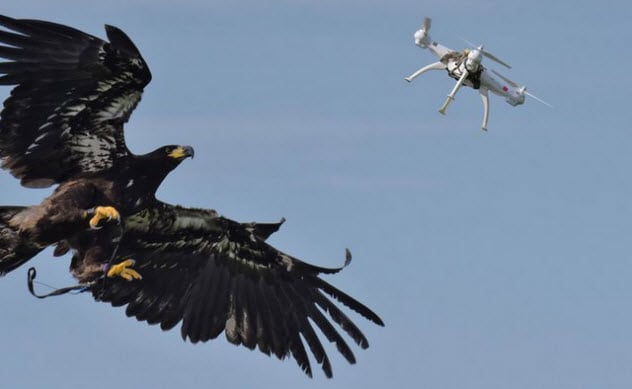 Even though these bald eagles were trained to do this, it’s still a very new and unusual behavior. The Dutch national police trained a troop of bald eagles to identify potentially dangerous mini drones in the airspace and, instead of steering clear of them, grab the drones in their talons and take them out of the sky.[8]

This is an amazing example of how adaptable and intelligent these massive birds of prey really are. Capturing and relocating the drones is similar to their natural ability to catch prey and take it back to their nest. But what’s remarkable is that they can overcome any fear they might have of man-made technology.

2 A Whale In The River 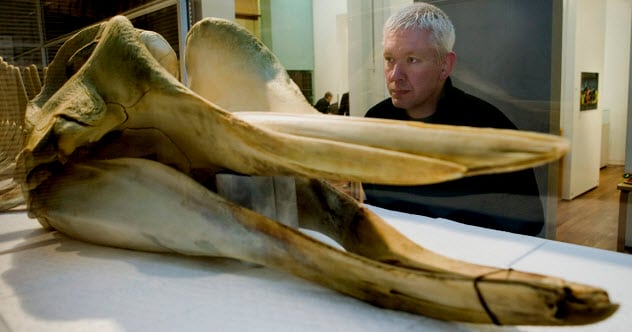 In January 2006, a young northern bottlenose whale was spotted swimming in the River Thames in London. This was highly unusual. The last time that a whale was seen in the Thames was 1913.

Unfortunately, the whale died due to dehydration and injuries despite great efforts to return it to the sea. Whales are not evolved to be in fresh water for an extended period of time. It seemed as though the whale might have been unwell or had lost direction for some reason, leading it to swim up the river.

The whale’s skeleton was recovered and is occasionally on display in museums in London. The animal became something of a media sensation because of this unlikely occurrence.[9] 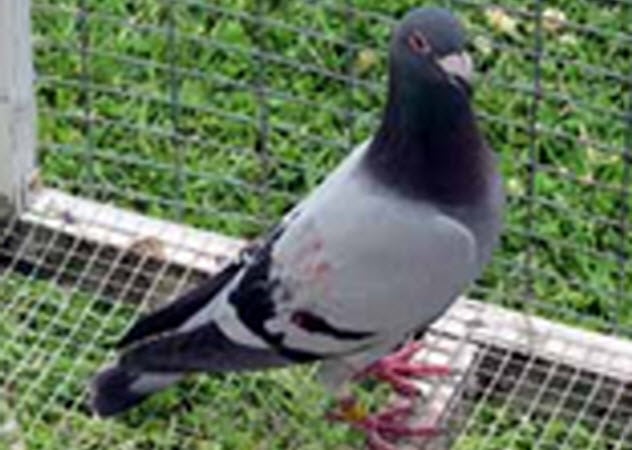 In 2012, a racing pigeon named Percy decided to change his address. Percy used to live in Cannock, Staffordshire, UK. He was released for a race from Fougeres, France. But instead of flying back home, he flew all the way to Canada.

Nobody is sure what motivated Percy to make such a radical move, but it’s certainly one for the record books.

I write a lot, mostly about animals and plants and weird stuff.