Some say love makes the heart sore. Well, the love of God must make the body sore, too. That’s certainly the case if these monasteries are anything to go by. Not only are these 10 buildings befitting the worship of the heavens, they’re also a right pain in the backside to get to. “Inaccessible” doesn’t even come close.

10The Monastery Of Ostrog, Montenegro 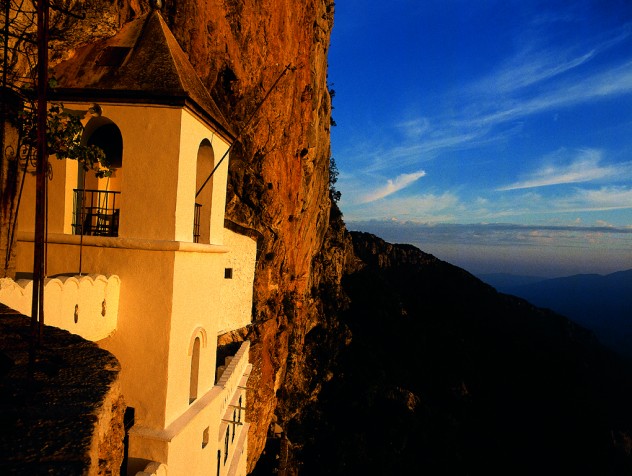 This Serbian Orthodox Church can be found high up in the rock face of Ostroška Greda—carved out of the stone. It is the most popular pilgrimage site in Montenegro and thousands of people visit each year. Founded by Vasilije, the Metropolitan Bishop of Herzegovina in the 17th century, the bishop is enshrined here, in the cave-church. One of the reasons for the large amount of visits is that many believe praying near the body of Vasilije can cure one’s ailments, or at the very least, have the difficulties of your life reduced. 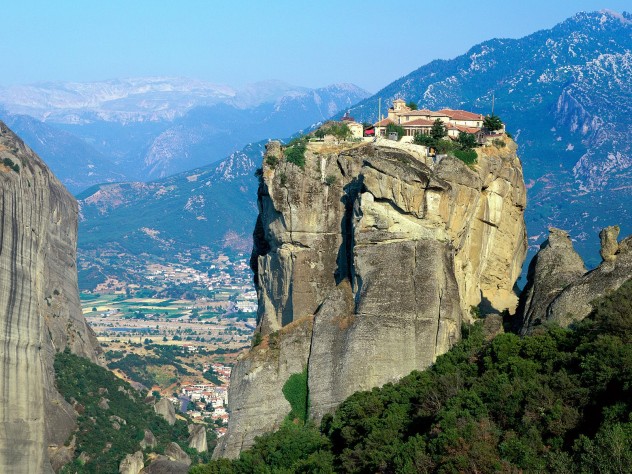 Metéora—meaning “middle of the sky”—is high up on a sandstone pillar in the Plain of Thessaly in central Greece. The Eastern Orthodox monastery is a UNESCO World Heritage site with perhaps the coolest origin story of the lot. Fable has it that the founder of the monastery, St. Athanasius, didn’t need to climb the rock face to plonk his religious flag in the sandstone: instead, he was carried to the dizzy heights by an eagle.

For most humble visitors however, carved steps are the only mode of transport to the top. Before the 1920s, most people had to use ropes and pulleys to climb to the top, and when it was built in the 14th century, ladders and nets were used to transport the materials over the 550-meter (1,800-ft) drop. The monastery is also famous for having featured in the James Bond movie For Your Eyes Only. 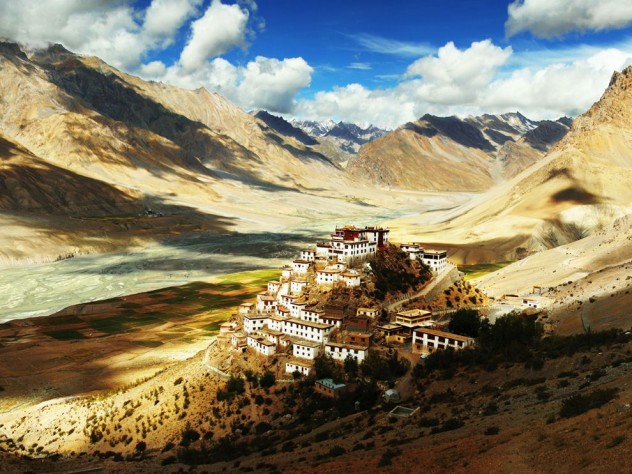 Looking like something out of Lord of the Rings, the Monastery of Ki (also spelled “Ki,” “Kye,” or “Kee”) is located in Ki Village, in the Himalayas. The Tibetan Buddhist monastery is on top of a hill at an altitude of 4,166 meters (13,670 ft) above sea level overlooking the Spiti Valley. It is a religious training center for Lamas and has seen multiple attacks by the Mongols and other armies. 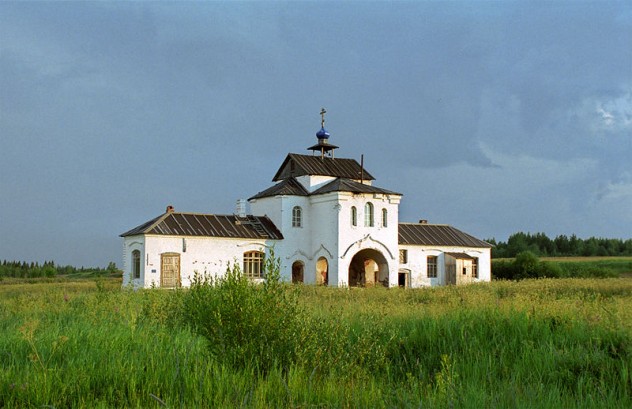 Instead, anyone wishing to visit the monastery must first hop a train to Nimenga Station, then hitch a lift up a forest track with a lumber truck (or walk if you can’t find a truck), and finally walk the last 32 kilometers (20 mi) by foot. Even then, however, there’s still the tricky obstacle of the lake. Travelers must light a fire and await a boat to be sent over from the other side. Needless to say, the monastery has no electricity or Internet, so make sure you let people know where you’re going before you leave. 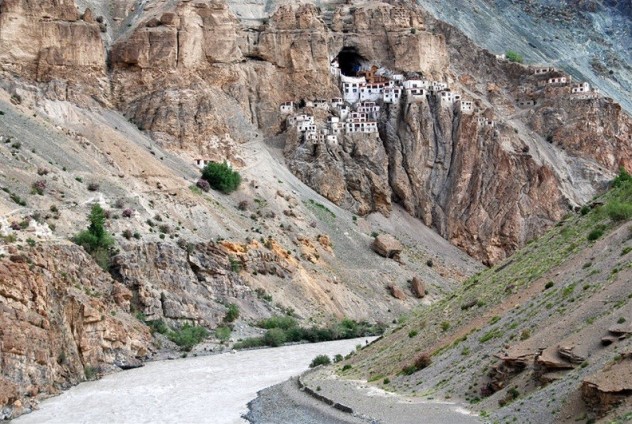 Hidden away in the remote southeastern Zanskar region, high in the Himalayas, lies Phugtal Gompa, chiseled out of the cliff face of a massive gorge some 3,800 meters (12,500 ft) up. Home to some 70 monks, the extraordinary structure was established in the 12th century by Lama Gangsem Sherap Sampo. Rather amazingly, though the structure is made of mud bricks, stones, and wood, it has survived hundreds of years. 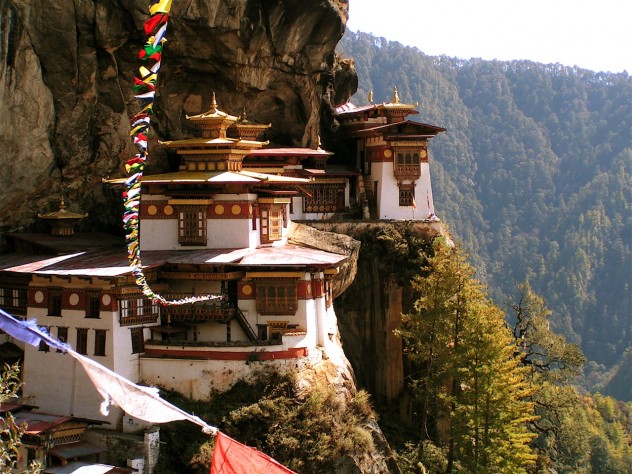 “The Tiger’s Nest” Monastery hangs precariously off the side of a 3,000-meter (9,800-ft) cliff in Paro Valley, Bhutan in the Himalayas. The legend says that Guru Rinpoche, the second Buddha, arrived on the cliff on the back of a great tigress, before hopping off his unusual mount and toddling off to find a cave to meditate in; a cave that can now be found within the monastery walls. Built in 1692 and renovated in 1998, the monastery is a strictly practicing, Buddhist-only retreat—and the only way to get there is by foot or mule. No tourists are allowed in. 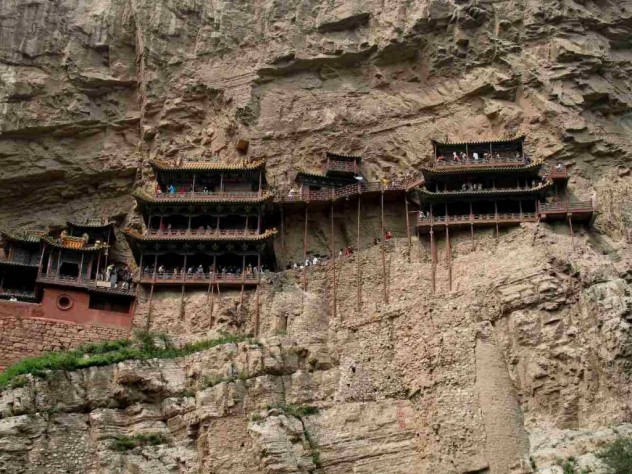 In China’s Shanxi province, there can be found “The Hanging Temple.” This monastery is based on a cliff overlooking the nearby Mount Heng. At first glance, this temple, supported by thin-looking stilts, looks like a strong gust of wind would bring it tumbling to the ground, but it must have the luck of the gods (or a really good structural engineer behind it)—it has survived several earthquakes over the years.

Inside, the building is extraordinary, as the halls and rooms follow the craggy contours of the cliff face. Constructed over 1,400 years ago, the temple is marvelous not only for its sturdy nature but also its architectural merits. How has it stood this long? Well, structural engineers are really smart. Beams were inserted into the rock face that the entire structure was built from. 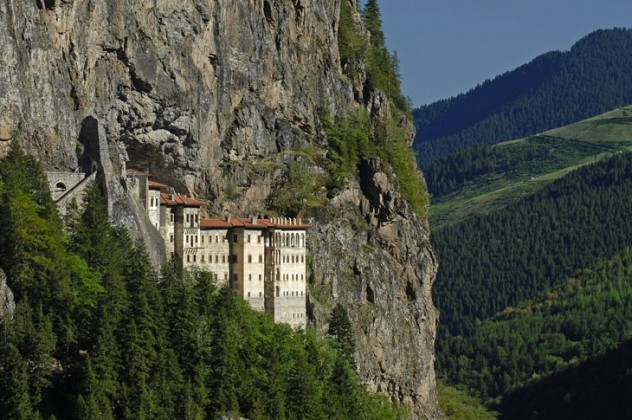 Sümela is a 1,600-year-old ancient Orthodox monastery, constructed on rocks reached by a long winding stone stairway through a nearby forest, located 1,200 meters (3,900 ft) up a cliff in Turkey’s Altindere Valley. Officially abandoned in the 1920s, the monastery now acts as a museum and popular tourist attraction. However, in 2010, an Orthodox Mass was conducted for the first time since it closed. The Sümela houses a few chapels, a kitchen, and the awesomely named Rock Church.

People who visit Popa have their head in the clouds . . . literally. Set some 737 meters (2,400 ft) up a sheer cliff face, the Popa Taungkalat’s shocking location doesn’t stop there. The monastery overhangs a volcano—a dormant volcano perhaps, but whether that was the case when the building was created nobody knows. This monastery is a famous Buddhist pilgrimage housing 37 Mahagiri Nats (spirits of the deceased who met violent ends). Those wishing to visit the monastery must bear two things in mind, First, you’ll need to climb all 777 steps. Second, avoid having lunch at the top—the macaques have been known to pinch people’s sandwiches. 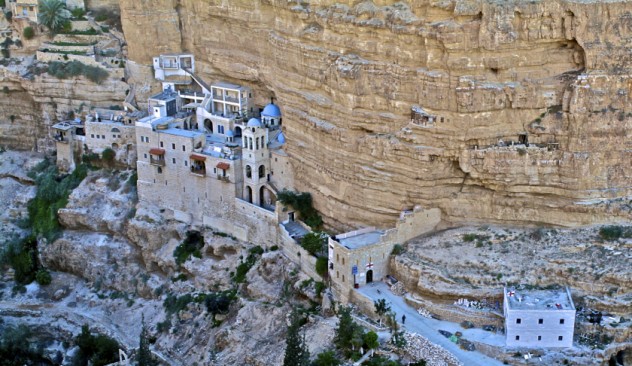 Located in the West Bank of the Palestinian territories, St. George Monastery is another of those monasteries you wouldn’t want to go sleepwalking in, seeing as there’s a sheer drop down one side. The sixth-century Christian sanctuary is accessible by a pedestrian bridge across the Wadi Qelt, which some suggest is the Valley of the Shadow mentioned in the Old Testament’s Psalm 23.

The monastery is built near the site of a cave that a group of fourth-century monks considered to be of great spiritual importance (they believed this was the site where the prophet Elijah was fed by ravens). However, the monastery has not always been peaceful. Shortly after it was built, Persian raiders passed through the valley and killed all 14 monks living in the monastery. The bones and skulls of the deceased can still be seen within the hallowed walls to this day.