What’s scarier: meeting a guy with a gun in a dark alley or encountering a chubby, one-legged woman eating dessert? Instinctively, you may run from the guy with the firearm, but in reality you may have more to fear from the woman in this scenario, as she has at least four lethal weapons at her disposal. Not convinced? This list of real-life bizarre weapons may cause you to look at ordinary objects in an completely new way. 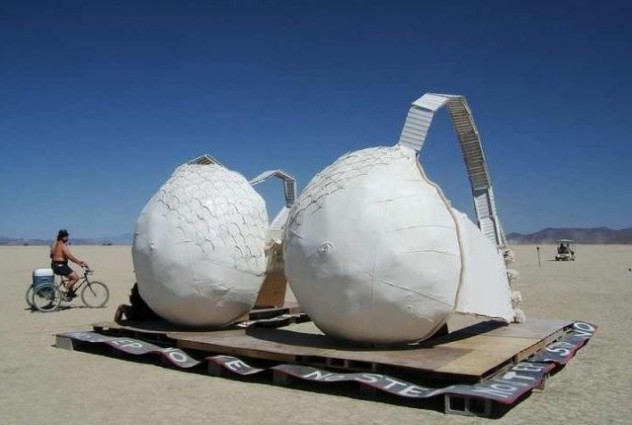 The next time you have an urge to go face first into an ample bosom, you may want to consider the case of Donna Lange.

In January 2013, police were called to a trailer park in Snohomish County, Washington after residents heard fighting from a neighbor’s home. When police arrived, they found 192-lb Lange apparently passed out on her 175-lb boyfriend—with her chest completely smothering his face. Although some might consider death by breasts the best way to go, it seems the boyfriend did not enjoy his final moments, as witnesses heard him screaming for Lange to get off, and investigators discovered clumps of her hair in his dead hands.

Lange was charged with second-degree murder. 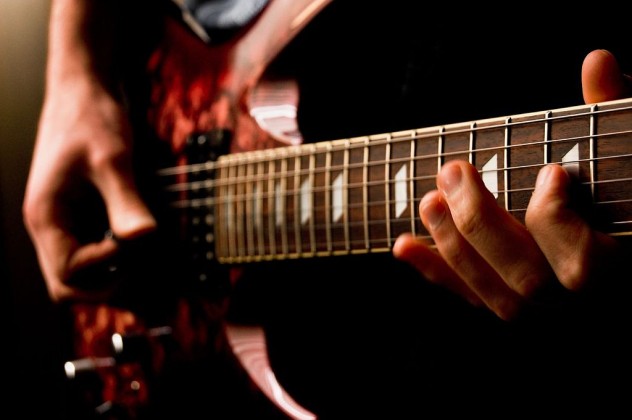 Friends and family of Derrick Birdow said he was “out of his head” in the days before he drove a car into a Baptist church and then beat a pastor to death with an electric guitar he had picked up in the church’s music room. Birdow’s widow told authorities he was paranoid that someone had injected him with drugs, and he had tried in vain to get help from a medical center. While he was never professionally diagnosed, she believed he was mentally ill.

Of course, no one will ever know for sure what was going through Birdow’s mind when he assaulted a beloved member of the community with a stringed instrument, since he died at the scene while in a patrol car. Officers used a stun gun to restrain him before placing him in the car, but when they went to check on him 10 minutes later, they discovered he had no pulse.

As it turns out, someone (probably the deceased himself) had injected Birdow with drugs, as toxicology reports from February 2013 showed Birdow was high on PCP on the day of the incident. PCP is a hallucinogenic known to cause mood disorders, paranoia, hostility, and feelings of physical strength and invulnerability. 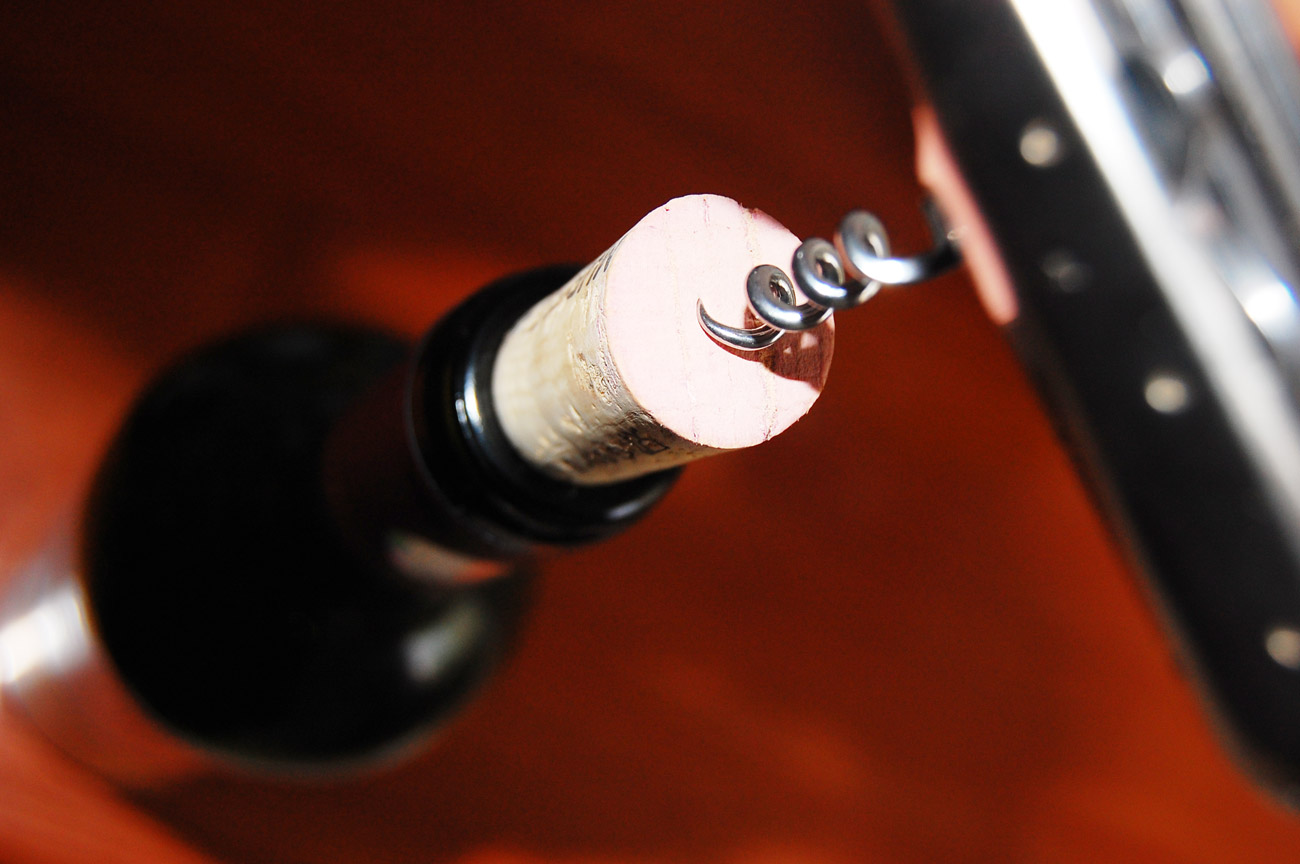 When 55-year-old Murat St. Hilaire didn’t show up for work and missed his daily telephone call to Carline Renelique (the mother of his children), Renelique became worried and took her three children with her to Hilaire’s Prospect Heights, New York apartment. Once there, the 11-year-old daughter found Hilaire in his bedroom, lying face up with a corkscrew stabbed in the side of his head.

This incident happened in 2008 and it appears no arrests have been made. Still, there are a couple things we can learn from this tragedy: if you want to play it safe, only drink wine from bottles with screw caps, and don’t have young, impressionable children hunt for missing persons. 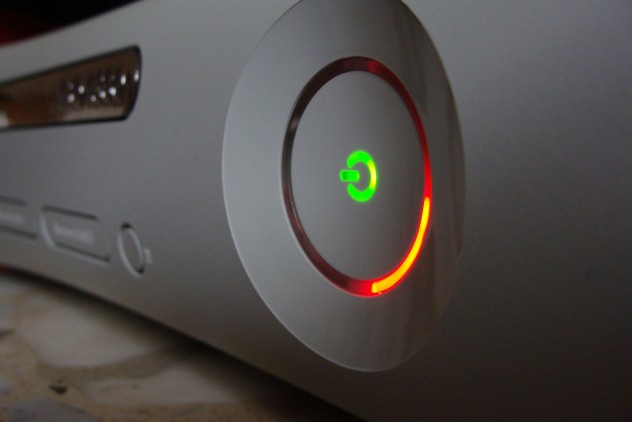 In April 2013, police in Fort Lauderdale, Florida (a state with no shortage of weird crimes) discovered the dead body of Monica Gooden alongside a “broken and bloody Xbox 360,” undoubtedly giving a new meaning to Xbox’s infamous “red ring of death.” The Xbox-wielding murderer was her boyfriend, Darrius Johnson, and, as it turns out, the peculiar choice of weapon isn’t the weirdest thing about this story.

Evidently, Johnson said he had to sacrifice her because she was somehow controlling him against his will, and killing someone born under the Taurus astrological sign was the only way to set his soul free. Incidentally, Gooden wasn’t even a Taurus, so there’s no telling who has control of Johnson’s soul now. He also told police that she “would not die” and he “fought her like he was fighting a dragon.”

Not only did Johnson beat his girlfriend with the Xbox, he also stabbed her repeatedly with a knife in some kind of post-mortem ritual. We think it’s safe to say the guy was completely crazy. 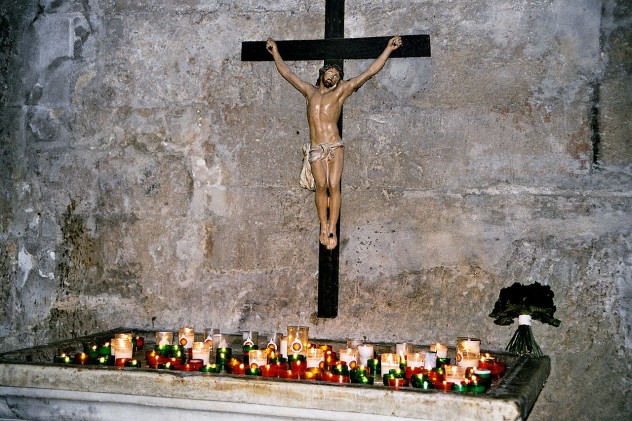 If you’re going to kill someone with a crucifix (on Christmas, no less), you have to be really confident in your stance as a non-Christian or be willing to risk a few lightning strikes. We’re not sure which side Karen Walsh of Ireland was on, but the woman was definitely willing to press her luck with the law when she used that religious ornament to mortally bludgeon her 81-year-old neighbor, Maire Rankin. Adding insult to injury, the soccer-mom-looking murderess sexually assaulted the granny in an effort to throw off police.

The body was discovered by Rankin’s family who went to check on the elderly woman when they could not reach her by the phone. She was discovered lying naked, bruised, and bloodied on her bedroom floor with imprints of the crucifix’s thorns on her chin.

Walsh was convicted of murder in 2011 after the prosecution argued she’d killed Rankin in a drunken rage when the older neighbor admonished Walsh to quit drinking and go take care of her two-year-old son. Walsh continues to assert her innocence and says she only consumed a small amount of vodka that day and merely went to visit Rankin to tell her “Merry Christmas.” 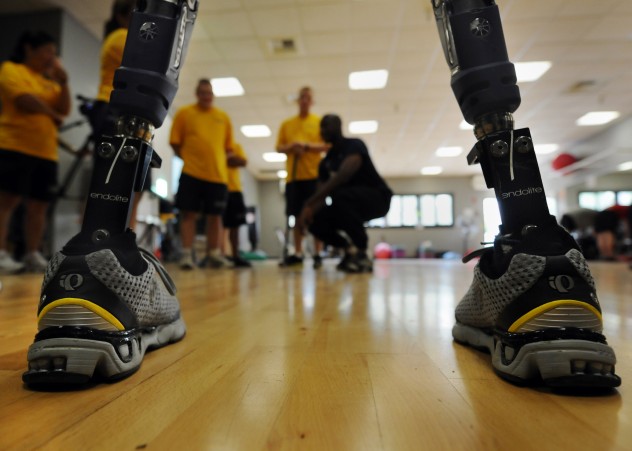 In 2011, Debra Hewitt, a homeless Louisiana woman, was convicted of killing her boyfriend with her own prosthetic leg. Although she’d been accused of killing twice before (acquitted both times) and looked far from heavenly, Hewitt had picked up the nickname “Angel” somewhere along the line. The prosecution immediately twisted it into the more appropriate “Angel of Death,” which the press pounced on as well.

According to reports, the “Angel of Death” stomped on her boyfriend, Dwayne Ball, then took off her prosthetic leg and used it to beat him to death—all while balancing on one good leg. After the pounding, she left Ball for dead in Lafayette Parish. The body was found six weeks later.

Hewitt was given a mandatory life sentence, so the formerly homeless killer is now getting three squares a day, free health care, and a roof over her head. That’ll teach her. 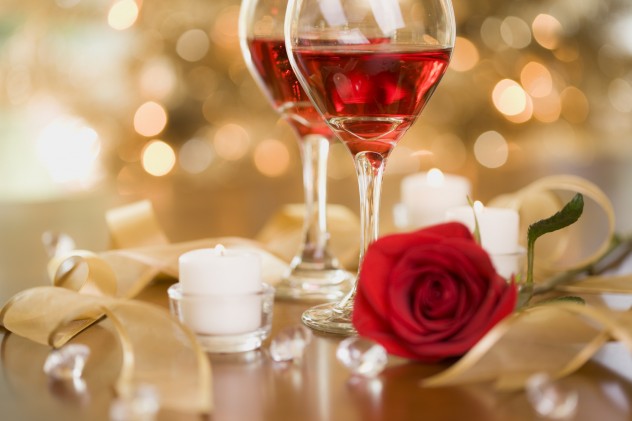 While no one actually died in this case, even attempting to murder someone via poison-laced lady parts is too weird not to mention.

Here’s how it went down: after a Brazilian woman’s husband refused to grant her a divorce, she apparently figured the next best option was to get rid of him permanently. There are any number of murder weapons she could have chosen and many methods of poisoning (if that was her preferred technique), but astoundingly, she figured the best plan was to stuff a toxic concoction up her cha-cha and invite her husband to perform oral sex.

The plan failed, however, because when the husband started the deed he became concerned about the strange odor coming from his wife’s privates and immediately took her to the hospital. Ironically, his quick action likely saved his would-be killer, since the wife could have just as easily died from the poison. 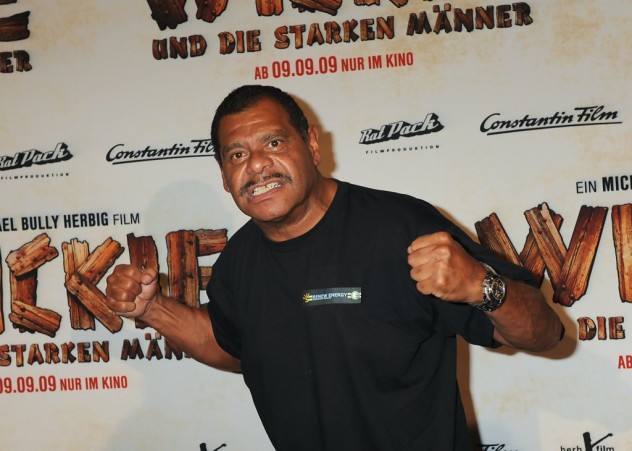 Guenther Kaufmann, an actor of some fame in Germany, claimed to have fallen on a friend and accidentally suffocated him with his hefty, 265-lb body. “I simply fell on him—I didn’t mean to kill him,” Kaufmann said. “All of a sudden he was no longer moving.”

That assertion alone is fishy enough, yet the tale gets even more suspicious when you find out the dead friend wasn’t just a “friend” but also an accountant who had loaned Kauffman money—which he had not repaid. Furthermore, the accountant suffocated from having his face pinned down into the carpet and wasn’t killed instantaneously by crushing (as Kaufmann alluded). Medical examiners said the process would have taken around five minutes, which, even if it was accidental, seems long enough for Kaufmann to notice he’s squashing the life out of his buddy.

Surprisingly, a Munich court didn’t find the fat actor guilty of murder, but they did give him 15 years in jail for grievous robbery and blackmail with fatal consequences. In an unexpected twist to the tale, Kaufmann was released from prison in 2005 when police uncovered new evidence that suggested the actor’s late wife was the perpetrator. Authorities believed Kaufmann confessed to the crime of burglary to protect his wife. 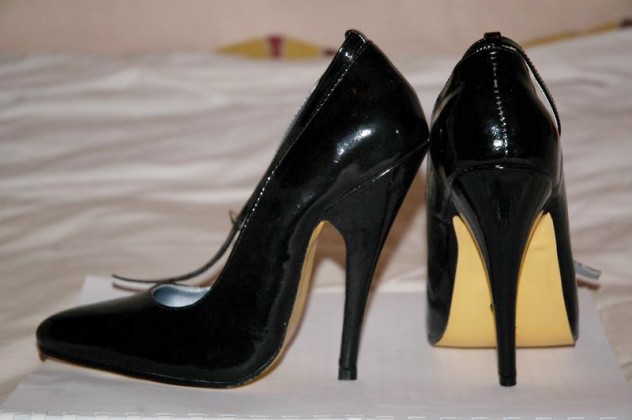 Breasts, vaginas, and now stilettos—it seems some women are walking killing machines. Unfortunately, Alf Stefan Andersson, a professor from the University of Houston, crossed one of these lethal sirens and ended up with more than 10 holes in his head via a remarkably sharp stiletto shoe. Some of the holes were 3.8 centimeters (1.5 in) deep and all were allegedly delivered by Ana Lilia Trujillo, who was found at the crime scene covered in blood.

Trujillo, a former massage therapist, alleged Andersson attacked her while they were together in his apartment and that she acted in self-defense. She claimed he became jealous after another man bought her a drink at a club earlier that night, which started an argument. They continued fighting once they reached his apartment and neighbors called the police after hearing sounds of a struggle. Of course, the damage was already done by the time the police arrived.

According to a motel manager where Trujillo lived, she had said in the past that her shoe was for protection and she’d use it to get anyone who “messed” with her. Apparently, she wasn’t kidding. Trujillo was arrested in June 2013 and is being held on a $100,000 bond. 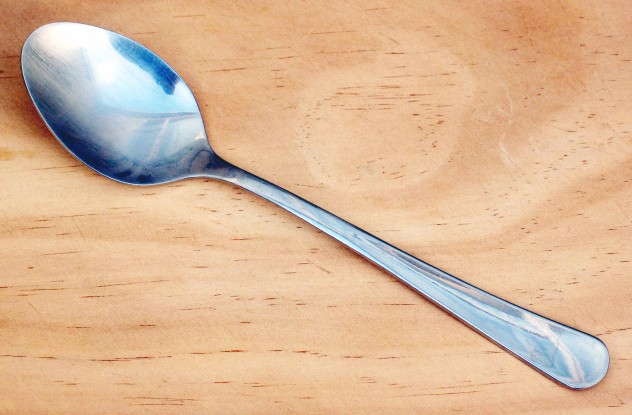 In case you needed any more convincing that you can be offed by just about anything, let us introduce you to Timothy Magee—a guy who was taken out by a mere dessert spoon.

On the day of this particular incident, a man named Richard Clare escaped out a window in a drug rehabilitation center in Hertfordshire, England to collect money the disabled Magee supposedly owed him. When he couldn’t get any cash off the man, Clare took Magee’s cell phone as part of a heroin deal. It was when Magee went to get his phone back that Clare hit him on the back of the head with the deadly spoon, which ruptured an artery and caused fatal bleeding between Magee’s brain and skull (talk about bad luck).

The courts deemed Clare innocent of murder (believing his assertions of self-defense) yet gave him a whopping seven days in jail for stealing the phone. Seven years later, in 2010, Clare was convicted of a different homicide and given no fewer than 27 years in prison. In the second killing, Clare opted for an axe instead of a spoon and went so far as to bury his victim in a metal box in their garden.