Please be advised: the videos in this article contain footage of people who are actually, truly insane saying and sometimes doing disturbing things. There is no graphic violence, but in some cases, truly terrible things happened directly before or after the footage in question.

The video in this link was edited down from 22 hours of video that police found in the apartment of Ricardo Lopez. The final videotape, still in the camera and labeled “The Last Day,” had been rolling when Lopez had shot and killed himself with a .38 revolver.

The tapes cover roughly eight months up to the dramatic end of Lopez’s life. The main subject throughout is Icelandic pop singer Bjork, with whom Lopez had a king-sized obsession. The tone of the narrative changes for the worse when Lopez discovers that Bjork has been dating a black man, as Lopez was apparently racist as well as psychotic. The tape also details Lopez’s building of a bomb, containing a device capable of spraying sulfuric acid at whoever was unlucky enough to open it, that he mailed to Bjork’s residence as one of his final acts before killing himself. Police were, fortunately, able to intercept and destroy the bomb after discovering the videotapes.

“I lost my freedom of speech to that guy. I’m in a terrible place. That’s the school that I go to. That’s my genocide school, where I’m gonna be homeless because of this school.” Just a few of the odd, disturbing statements made by Jared Lee Loughner in this video.

This release of this tape resulted in Loughner’s expulsion from Pima Community College and was made around September 2010—just months before Loughner opened fire at a meet-and-greet hosted by Arizona congresswoman Gabrielle Giffords outside of a Tucson Safeway store. Six people died and 13 were wounded (including Giffords).

Loughner had been increasingly unstable for some time. Both his parents and school insisted he receive psychological counseling, but he was sadly never helped.

Aileen Wuornos, famously portrayed by Charlize Theron in the acclaimed film Monster (2003), is perhaps the most notorious female serial killer of all time. She was a hitchhiking prostitute who confessed to killing six men. Though she claimed that all of the killings were done in self-defense, a jury found differently and sentenced her to death.

This video clip is part of a documentary by professional provocateur Nick Broomfield and shows Wuornos responding to questions put forth by Broomfield the day before her 2002 execution by lethal injection. When Broomfield begins disputing her self-defense claims, she does not take kindly to the line of questioning and shows lengthy flashes of the fury—sadly born from a lifetime of hardship and abuse—that led to her crimes.

In December of 2010, a man named Clay Duke walked into a meeting of the Panama City, Florida school board. He had an agenda; he also had a can of spray paint and a gun. He was upset over his wife’s firing (though, as seen in the video, none of the school board members present seem to know who his wife is), and he repeatedly states his intention to die that day, in that room. One woman, board member Ginger Littleton, sneaks up behind the shooter and whacks him with her purse early in the standoff, to no effect. Finally, Duke levels his pistol at the helpless board members and fires six times—incredibly, missing every single time.

Chaos ensues, and Duke engages (off camera) in a brief exchange of gunfire with security guard Mike Jones. Duke was shot and wounded and committed suicide right there on the floor.

Robert Pickton may be the worst serial killer in Canadian history. The details of his case are grisly and appalling: a pig farmer, Pickton was charged with 26 murders, but is thought to be guilty of many more. Pickton killed most of his victims in his farm’s slaughterhouse and treated them like the livestock he obviously considered them to be. Some victims were thought to have been fed to his pigs, and health officials once issued a tainted meat advisory to customers who may have bought pork from his farm for this very reason.

In the video, Pickton is talking with an undercover officer who is posing as his cell mate. “They got me on this one,” he confides, before discussing methods of body disposal with the officer, lamenting how he’d been caught when he got sloppy, and wishing he could have killed one more so that he could have made it to “an even 50.”

Unbelievably, 20 first-degree murder charges were stayed, and as of this writing, Pickton has only been convicted of six counts of second-degree murder. The trial judge, however, imposed the maximum sentence: life in prison with the possibility of parole after 25 years.

Charles Manson is one of the most notorious figures in American history and is considered a prototypical serial killer—despite the fact that he never actually killed anyone. Legendary interviewer Tom Snyder sat down with Manson in his jail cell in 1981, and the result was a riveting, fascinating look at Manson’s thought process, or lack thereof.

Manson has given a lot of interviews, but Snyder’s provocative style brings out all of his facets—his charm and charisma, his paranoia, and yes, his wild-eyed craziness. The entire hour-long interview is a compelling watch, but a particularly nerve-jangling moment comes at about 18:40, when Manson asks Snyder if he has a pistol on him. The exchange that follows highlights Manson’s trademark unpredictability and flights from reality.

Read more about the most notorious living serial killer in the world! Buy Helter Skelter: The True Story of the Manson Murders at Amazon.com!

4 Song Of The Gainesville Ripper

In the summer of 1990, Gainesville, Florida was racked by a shocking series of murders right out of a slasher film. The victims had all been mutilated and killed with a hunting knife. Some of them were even posed: one victim’s severed head had been placed on a shelf overlooking her seated body. The press dubbed the killer “The Gainesville Ripper” but his real name was Danny Rolling, and he would eventually be executed for five murders in 2006.

Witnesses said that Rolling sang a hymn while the lethal injection was being administered, and as unsettling as that is, this video is almost as bad. During his hearing, Rolling asked to address the court; he then immediately launched into a mournful folk song.

The man in this video is Dion Terres, who opened fire on a crowd of 20 with a .44 Magnum handgun in a Kenosha, Wisconsin McDonald’s in 1993. The video was taken about a day before this occurrence, and it is quite unsettling.

He states that he is “very seriously considering” killing his supervisor at the assembly plant that he’d recently quit. Displayed on the tape is enough firepower to carry out some serious carnage, and this, paired with his demeanor and choice of words, makes the fact that only two people died by his hand seem incredibly lucky. He says, “Depending on what I do today . . . I don’t know if you’re gonna see this tape. I’m sure the whole world will see this. They can kiss my ass, everybody . . . on this planet. That’s right, ’cause I’d kill everybody if I could.”

Terres never made it to the assembly plant, and his deadly rampage was somewhat mitigated by the fact that he left the AR-15 assault rifle and extra magazines shown in the video by his car when he entered the McDonald’s. If he had not, there certainly would have been more than just two fatalities that day. 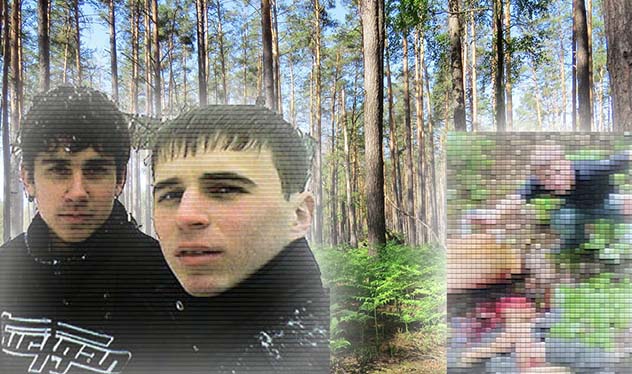 This video is just over a minute long, and it’s mostly blurry and indistinct. A much longer and clearer version has been posted in various places around the Internet, and we strongly advise against trying to find it—many who have sought it out wish they had not.

The video has been callously nicknamed “3 Guys, 1 Hammer,” and it is an edit of the one of the videos taken by Viktor Sayenko and Igor Suprunyuck during their 2007 killing spree. They are among the worst serial killers in the history of Ukraine and were referred to in the local press as the “Dnepropetrovsk maniacs.” On July 12, 2007, they knocked 48-year-old Sergei Yatzenko off of his scooter in the middle of a country road. In broad daylight, Igor beat him to death with a hammer while Viktor captured the entire attack and its aftermath on video.

The extreme cruelty and callous nature of their crimes shocked the entire nation. The boys seemed to have no motivation for their crimes beyond simple entertainment. Ukraine has not had the death penalty since 2000, and both boys were sentenced to life in prison in 2009.

In the above video, a Q&A takes place between two people: a young woman who has no idea what is happening to her, and two men who are about to kill her. They make it clear, in response to her questions, why this is happening: they don’t like her. They are Leonard Lake and Charles Ng, and despite Lake’s stated intention to keep a female slave as his prisoner for whatever purpose he desires, it seems that Lake and Ng didn’t keep anybody prisoner for very long. The tapes shown in the above video have been heavily edited, and mostly consist of exchanges between Lake and several unnamed victims.

Lake committed suicide when he was arrested for an unrelated crime, which led to Ng’s discovery and the revelation that the pair had killed between one and two dozen people at Lake’s California ranch. Lake’s writings revealed his paranoid belief that a global nuclear war was imminent and detailed his plan to rebuild the human race in its aftermath by stockpiling female slaves. But the only things found stockpiled at the ranch were weapons and bodies—12 of them, in shallow graves around the property. Ng was convicted and sentenced to death in 1999 and as of this writing, is still on death row in San Quentin.