Mandatory mask laws and rules have become a polarizing issue during the COVID-19 pandemic. Proponents argue that masks are necessary to stop the virus. But critics have cited human rights concerns as well as evidence showing that masks are ineffective in stopping the spread of COVID-19.

Either way, vigilantes and over-policing have been well documented over the past few months when it comes to mandatory mask enforcement. The majority of the targeted individuals had medical exemptions or were following the law. The few who were legally wrong were often the victims of police and citizen brutality.

Nonetheless, these people did not deserve to be victims of violence due to their health, a misunderstanding of the law, or the exercise of reasonable civil disobedience regarding unjust laws.

10 Woman Threatened For Not Wearing A Mask

A mandatory mask law was in effect in Park City, Utah, in July 2020. Citizens were required to wear masks in public unless they had a medical exemption. In Park City, a woman entered Walmart to get her shopping done. Immediately, she was confronted by a male customer who began yelling at her and shoving her with his cart.

The woman had a medical condition that exempted her from wearing a mask. The man was kicked out of the Walmart store, and police were soon called. By that point, the man had left the premises. He is now wanted by authorities for assault.[1]

9 Man Had Hot Coffee Thrown In His Face While Eating

Woman Confronts Man For Not Wearing Mask, Throws Coffee In His Face

In a Manhattan Beach, California, restaurant, two men were sitting down eating their food when they were confronted by a man and a woman who were yelling at them for not wearing masks. California law allows people in restaurants to take their masks off while eating their food, which the men were about to do.

The couple refused to listen to the men. Eventually, the woman got angry and threw coffee at one of the men. The hot liquid hit the guy in the face. This prompted the other man at the table to defend himself and his friend by trying to force the couple away. Eventually, the police were called, which de-escalated the situation.

No charges were filed. However, the woman was made to apologize to the man she had attacked.[2]

When Charles Redell Moody went to a local flea market to do some shopping, he forgot to wear a face mask despite a state order to do so. When he was observed in defiance of the law, the police were promptly called. They violently placed Moody under arrest.

A recording showed the arresting officer as well as private citizens attacking Moody, who was unarmed and had not threatened anyone. This triggered a debate about mandatory mask orders as well as racial profiling. Moody is African American while the sheriff’s deputy and the citizens who attacked Moody were all Caucasian.

Despite the alleged evidence of police brutality and several irregularities in regard to the arrest, North Carolina authorities declared that the arrest did not violate police procedure. This spawned protests outside the flea market.[3]

7 Man Attacked With Metal Rod For Taking A Phone Call

While getting off a bus in the Florida Keys in early 2020, a man removed his mask to take a phone call. When bus driver Denys Santos saw this, it enraged him. Santos abandoned his station on the bus, grabbed a metal rod, and tried to attack the man. Santos also berated the man for not wearing a mask.

Thankfully, the man escaped unharmed. He called the police to report Santos. Meanwhile, the driver returned to the bus and drove off. But he was pulled over shortly afterward by police. Santos was arrested and charged with aggravated assault.[4] 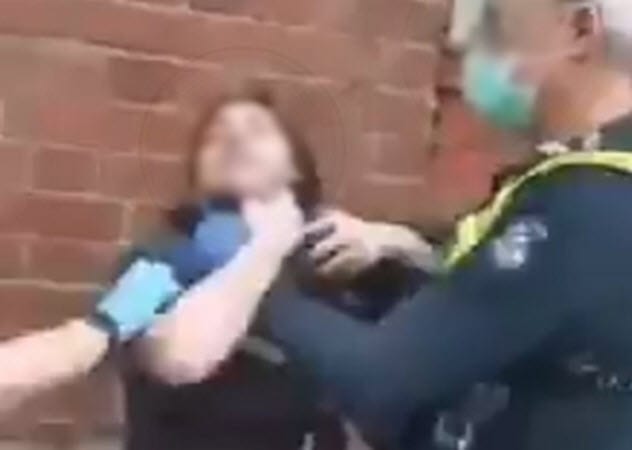 In Victoria, Australia, recent COVID-19 restrictions rival those of a military dictatorship. People are only allowed outside their homes for an hour a day, they are unable to travel more than 5 kilometers (3 mi) from their homes, and they are subjected to many other arbitrary restrictions. Unless there is a valid medical reason to the contrary, every citizen must wear a mask at all times while outdoors.

In a now viral video, police in Melbourne were seen attacking a young woman in the street, taking her to the ground, choking her nearly unconscious, and kicking her in the chest. All the while, the person making the recording was telling the officers to get off the woman and saying that the police were hypocrites for not social distancing.

Judging by the video, the dispute occurred because the woman was not wearing a mask. As she had an exemption due to medical reasons, which she told the police when they first approached her, they appear to have had no legal basis for their actions. Melbourne police are now conducting an internal investigation into the use of force by their officers.[5]

5 Police Used Pepper Spray On A Man In Tim Hortons

A mandatory mask law went into effect in the province of Quebec on July 18, 2020. On that day, a man walked into a Tim Hortons restaurant without a mask, which prompted the shop to call the police. When the officers arrived, they told the man to leave. It is believed that he tried to inform them that he had a preexisting condition, although that has not been confirmed.

The encounter ended with the man—who had not engaged in any violent attack, threat, or apparent provocation of violence—being pepper-sprayed by police and tackled to the ground. His girlfriend, who was recording the incident, was shouting in French in the background, “For a mask, for a mask.”

All the while, her boyfriend was being beaten by police. He was later ejected from Tim Hortons and charged with resisting and/or willfully obstructing a peacekeeper. As of this writing, the case is ongoing.[6]

Critics of mask laws were concerned that private citizens would take the law into their own hands and do irresponsible things if they encountered people who were not wearing masks. Those fears came true on July 27, 2020, at a San Diego dog park.

A woman approached the O’Brien family, who were not wearing masks, and started berating them. The couple did not respond to the aggression, which prompted the angry woman to become more unhinged. Soon after, she returned with pepper spray and proceeded to use the aerosol on the couple and their dog.

Although California does have a mandatory mask law, it does not apply to people who are outdoors and maintaining physical distance from people outside their household, which the O’Briens were doing. The couple had to be hospitalized for their injuries, which thankfully were not life-threatening.

As of this writing, San Diego police are looking for the assailant.[7]

Eero Janzen suffers from prostate cancer. His doctors have advised him not to wear a mask, to get plenty of fresh air, to exercise, and to take breaks whenever he needs them. While out with his wife at a local mall, he needed to sit down. So he did on the mall steps.

Security promptly began harassing the couple. The guards told the Janzens that Eero couldn’t sit there due to social distancing and that they needed to leave the mall. The couple tried to explain that Eero was suffering from cancer and needed to rest.

Although Eero’s cancer entitles him to disability protection under the Canadian Human Rights Act and the Ontario Human Rights Code, the guards kicked the Janzens out of the mall and told them they were banned for life.

The couple complied and left the mall. As they approached their car, they were ambushed by the guards. Carol Janzen was repeatedly thrown against the car and beaten, which caused several injuries and over $2,500 in damage to the vehicle.

Police soon arrived and arrested Carol. They claimed that she had spat on the guards as they were viciously beating her and charged her with assault. It is alleged that this was not supported by camera footage, which has since been deleted by the mall.[8]

2 Unarmed Man Shot While Coming Out Of His Home 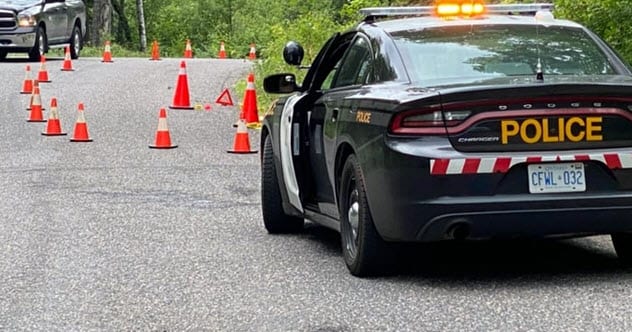 Besides the COVID-19 pandemic, the biggest story of 2020 is excessive force by the police. This controversy briefly came to the small community of Haliburton, Ontario, when a 73-year-old man was shot dead by the Ontario Provincial Police.

On July 15, 2020, the man went into a local grocery store without a mask. A dispute with store employees ensued, resulting in the man leaving or being kicked out. (Sources vary on this.)

The store promptly called the police. However, officers arrived after the man had left. The police were able to identify the man and his place of residence, and they pursued his car. When the police arrived at his house, they drew their guns and demanded that he come out.

When he complied with those orders, he was promptly shot dead. He had no weapon. According to witness statements, he did not appear to pose any threat to the police.

A rifle and pistol were later recovered at the house, but there is no proof that they were used in the incident. The Special Investigations Unit inquiry into the shooting is ongoing.[9]

1 Man Beaten To Death By Police 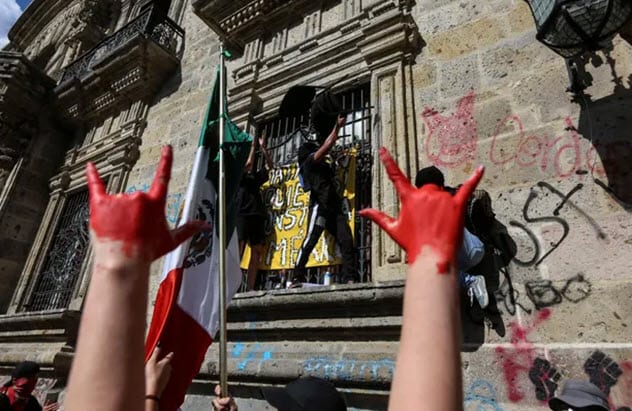 Giovanni Lopez was a bricklayer from Guadalajara, Mexico, who did not survive his encounter with police. On May 4, 2020, Lopez was violently arrested at gunpoint for not wearing a mask outside. Although the police maintain that he had been resisting arrest, footage from the scene as well as witness reports allegedly contradict those claims.

When his family went to the police station to bail Lopez out of jail, they were informed that he had been transferred to the public hospital. By the time his family arrived there, Lopez was already dead.

Although he had a gunshot wound, the autopsy revealed that he had died of blunt force trauma to the head. His death prompted large public protests in Mexico. Many demanded justice for Lopez and his family.[10]