People like to complain that Valentine’s Day is too commercial, that it’s all an excuse to make us buy overpriced chocolate and flowers. Well buck up—we may be wasting our money, but at least we’re not traumatizing our loved ones! Because based on these Valentine’s cards from the 1940s and earlier, that’s what the holiday used to be all about. It’s Valentine’s day so here is a a light-hearted look at this special day of love.

10
From a Mad Scientist Vampire with Love 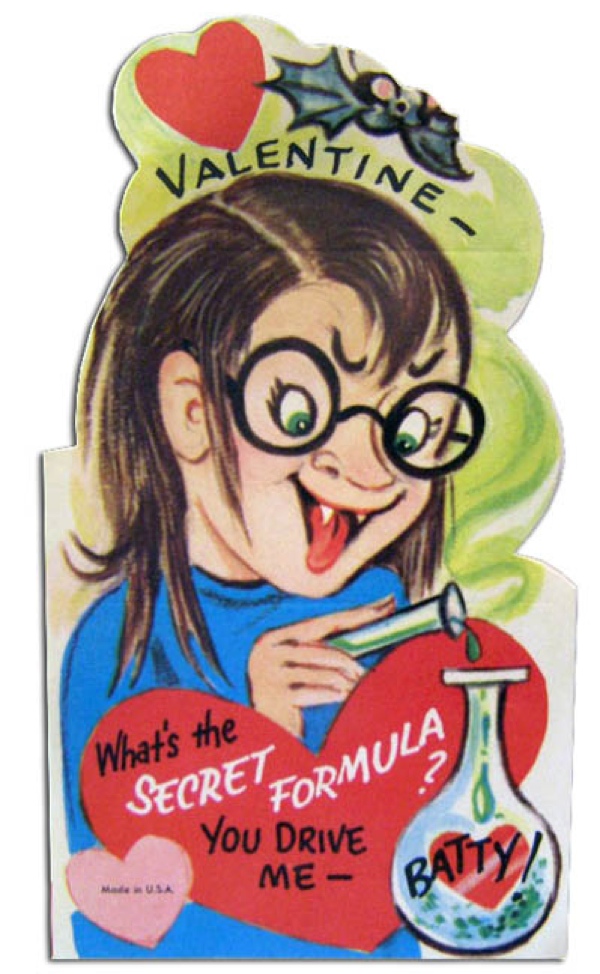 Look at . . . her? It? She/he is half vampire, half evil doctor and all terrifying. Anyone who can do that with their mouth is either Gene Simmons or a monster, and you shouldn’t have sex with either one. The “secret formula” they’re working has to be some sort of love potion, which is just a polite term for rape juice. If you get this Valentine, just run. Don’t stop to ask questions, or it will already be too late. 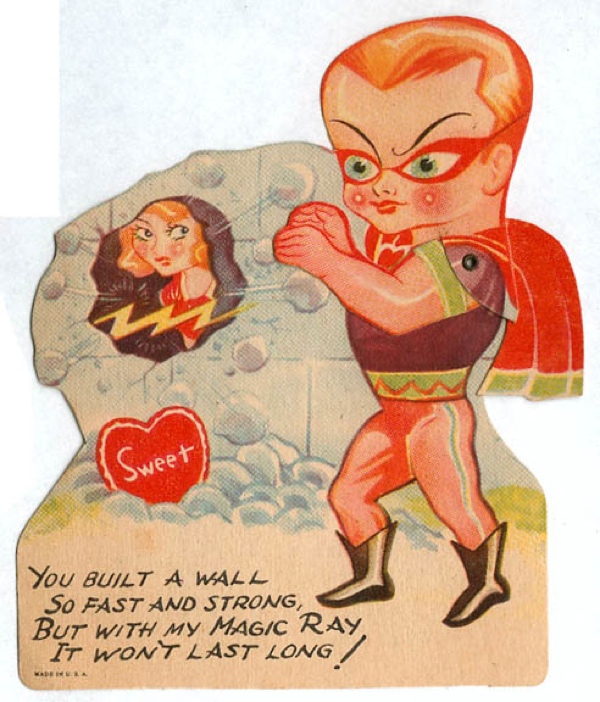 Dude, look at yourself. There’s a reason she built a wall, you’re dressed like Captain Sex Offender. If you need a magic ray to get access to your loved one, she’s not playing hard to get—she’s playing “traumatized victim.”

Her expression says it all. She’s not in love, she’s trying to calculate her best escape route while she still has time. Superhero themed Valentine’s cards were even more popular in the past than they are today, but based on this one they probably released clouds of knockout gas. 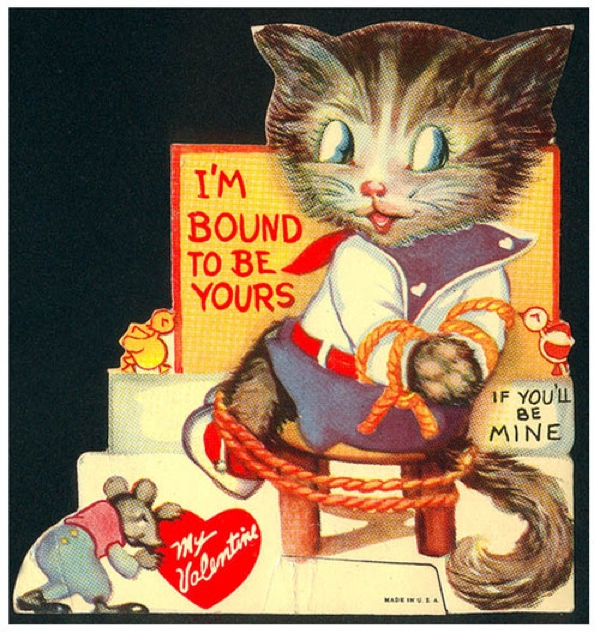 Look, I’m not here to question how you express your love. If you and your partner like to dress as sailors and tie each other up while adorable mice and chicks watch, that’s none of my business. But please, please leave your kitten out of it. Nothing ruins a night alone with your special someone quite like the SPCA busting down your door.

It doesn’t help that the cat is terrified. Sure, at first glance he seems happy enough about the situation he’s in, but look closer. Never mind the Exorcist-esque contortions needed to rotate his head like that—there’s someone behind him, they’re coming closer, and he is terrified. Whoever put him in that position is either not playing nice or has a serious misunderstanding of the idea that cats enjoy playing with string. 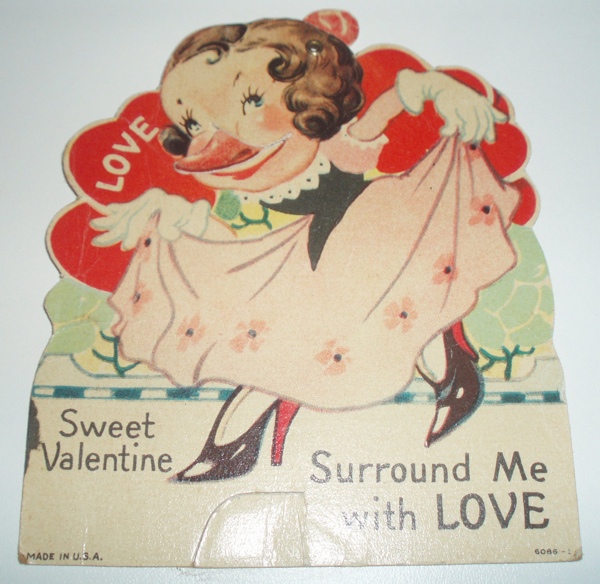 Sorry, sweetheart, but the only thing you need to be surrounded with is prison bars, and lots of ‘em. I don’t know what laboratory you escaped from (the vampire’s?), but love should be the last thing on your mind. Focus on the pitchfork wielding mob that’s no doubt chasing you down and cursing you as a blasphemy against nature.

This 1936 Valentine gets weirder the longer you look at it. Where are her feet? They’re not in her shoes. Why is her dress clearly made for a much larger woman? Did she murder her creator and steal her clothes? Is this the grim origin of the “duckface” that now plagues Facebook profiles worldwide? So many questions, so little time to answer them before you run screaming in horror. 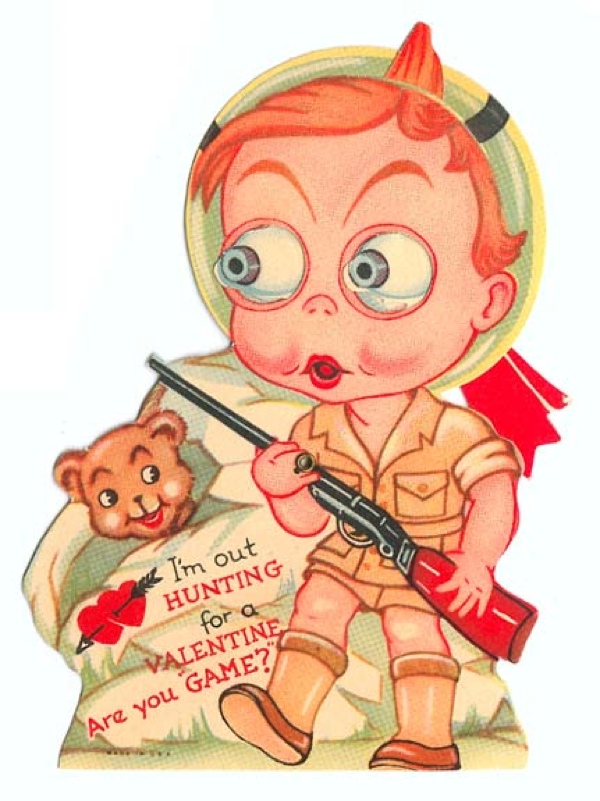 Wh… why does he have light bulbs for eyes? Are those light bulbs? Whatever they are, don’t look at them. One way or another, they will destroy you.

I shouldn’t criticize the poor guy though, because he’s obviously in agony—look at the mouth, locked in a silent scream that will never end. It’s like he’s a robot that was taught to kill but learned how to feel pain. Hunting and other “manly” activities were common themes in old-timey Valentine’s cards, but that doesn’t even begin to explain what’s going on in this one.

This poor creature needs to be put out of his misery for the safety of all. “I’m out hunting for a Valentine” isn’t a cute metaphor, he’s literally hunting the most dangerous game. “Are you ‘game’?” indeed—“Because I am going to shoot you, because I am a killbot. Ha. Ha. Ha,” is how the text would finish if there was more room. 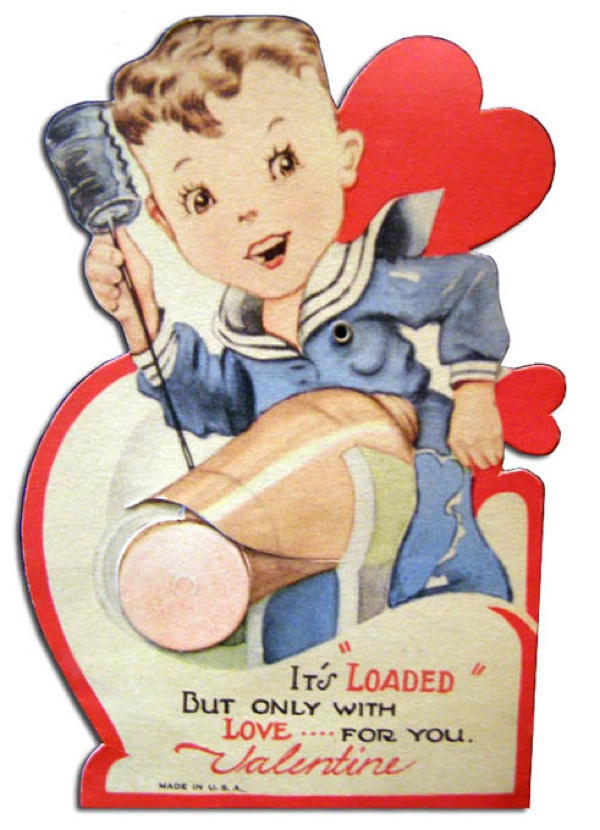 Look, there’s no way around this—his cannon looks like a penis. Don’t accuse me of being a pervert, they knew exactly what they were doing here. If you think of a cannon you picture a black one, right? So why is his flesh colored, and rather strategically positioned? It’s “loaded” alright, and it’s clearly ready to fire. What, pray tell, is it firing? Well, let’s just say I’m willing to bet that’s not an ellipsis, but rather the word “juice” after the censors got to it.

Also, is it just me, or is the cannon’s barrel twisted? Whether you think of it as a literal cannon or symbolism for the most well-endowed little boy in history, it shouldn’t look like that. If someone’s going to fire his “love” at you, you at least want a proper delivery method.

4
Shot Through the Heart 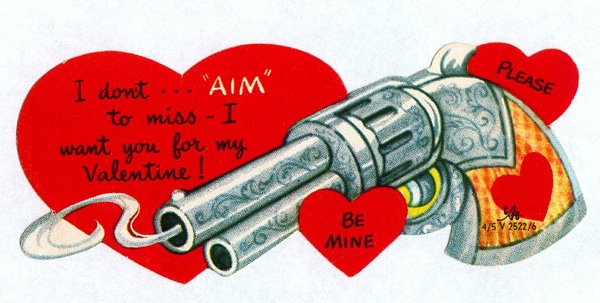 Guns used to show up all the time on Valentine’s cards, which makes sense—kids played with toy guns a lot back in the day, and cultural attitudes towards firearms weren’t what they are now.

That being said, it’s difficult to read this as anything other than a threat. I don’t care what the context is—unless you’re trying to seduce a member of the NRA, this will come across as creepy. It might as well read, “Please be mine, because I’m willing to use force if necessary.” And yes, that may get you love, but probably not the long term romance you’re hoping for. 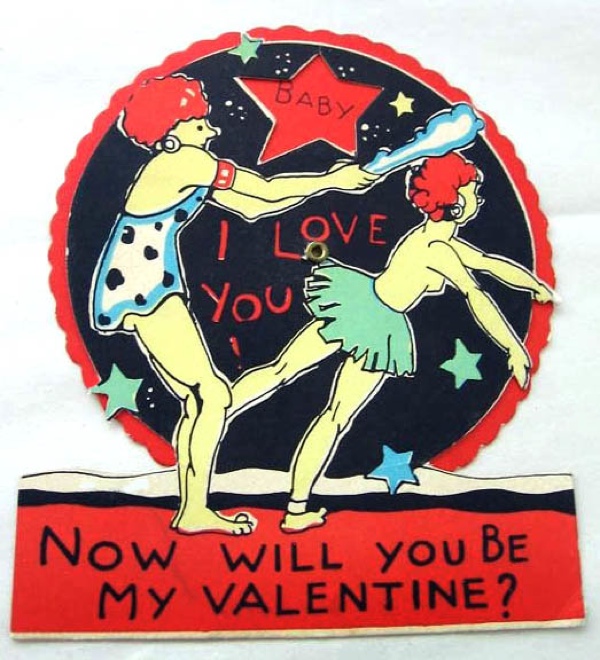 Okay, I may have been exaggerating on the previous entry, but there’s no hyperbole here—this is a pro-rape Valentine. There’s simply no other way to read it. Good lord, can you imagine what your Valentine would think of you if you gave this to them? Trick question—anyone who gives this doesn’t care what they think, because they’re only using it as a distraction while they re-enact the portrayed scene. “Now will you be my Valentine?” sounds even scarier when it’s being whispered to an unconscious body.

2
I’d Love to Have you for Dinner 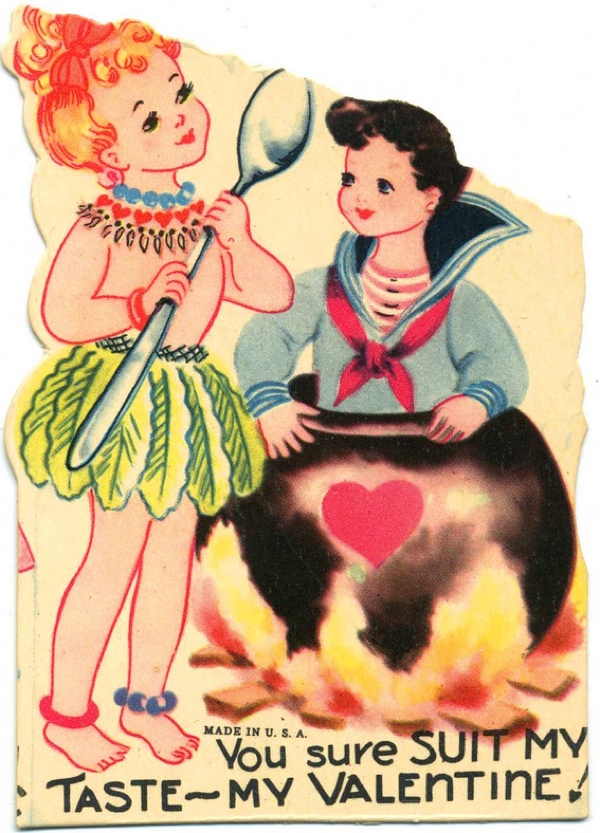 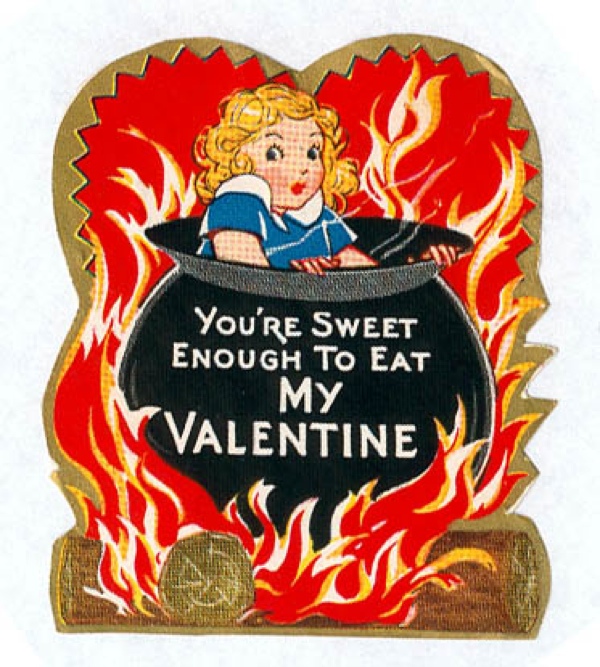 Was “you’re so cute I could just eat you up” a phrase that used to be taken literally? Or were people simply turned on by cannibalism and horror once upon a time? I don’t know the answer, but does it really matter when all the potential explanations are equally terrifying? I wanted to dismiss this as some weird attempt at a dark joke, but it turns out “cannibalistic cards” is an entire genre.

Maybe before it was traditional to eat chocolate at Valentine’s it was in vogue to eat human flesh. Or maybe WWII veterans were trying to work out their PTSD through the medium of cards. Perhaps this what prisoners made before they started working on license plates? We may never know.

1
Be My Valentine or I’ll Kill Myself 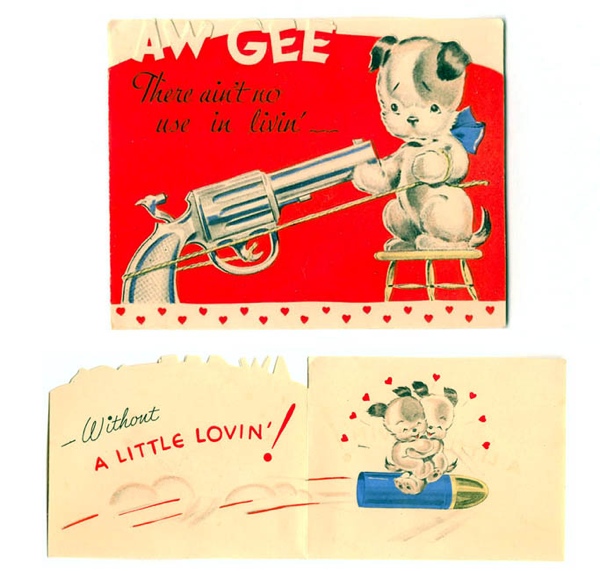 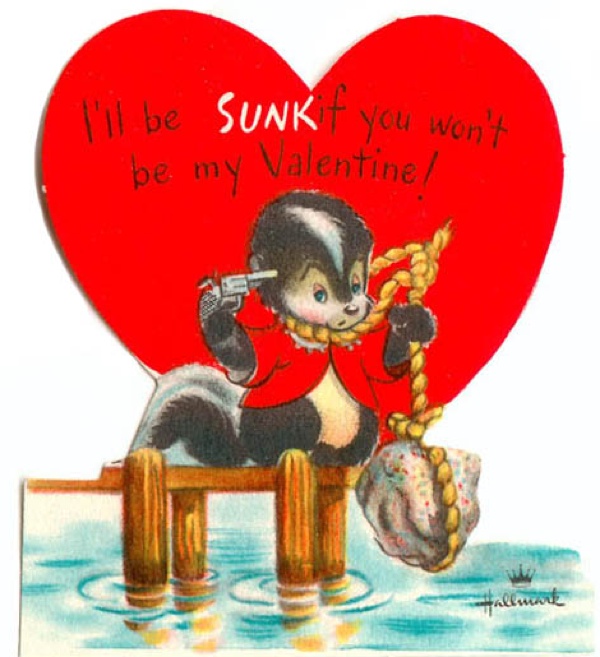 A suicide themed Valentine is already inappropriate enough—it doesn’t help that the skunk isn’t screwing around. A gun or a heavy rock would be enough for most people, but no, he needs both. And based on his facial expression, he’s about five seconds away from using them. And this was made by Hallmark, a company so wholesome their business plan is hugs. I don’t even want to think about what more risqué manufacturers would have produced.

Again, this was an entire genre, not a one-off by some clinically depressed Hallmark employee. Apparently it used to be that if you weren’t on a Valentine’s date you were either committing or trying to talk someone out of suicide.

Yeah, that’s right. If you can’t find love today, there are countless sappy movies and clichéd TV shows out there to assure you it will happen sooner or later. If you couldn’t find love in the past? Kill yourself. Valentine’s Day used to be hardcore.

You can read more from Mark, including his own light-hearted take on suicide, at his website.